Seeing as how the COVID rules allow it, Phil and I had a session in Shedquarters. One of Phil's lockdown projects is to do something with some 18th period flats, utilising something simple in the DBA style of things. As a starting point we had a copy of the as yet unpublished and possibly ill fated "Horse Foot and Guns", which theoretically covers 1701-1914 (EDIT: as pointed out by StuRat below they are now available I don't know. Stop paying attention for a decade and people go crazy). It is many, many, years since I got anywhere near these. I first encountered them when they were a Napoleonic set called "Boots and Brandy". 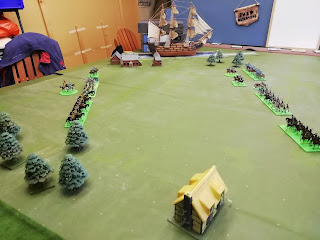 The aim is old school/1960s look to the game. Hence the bright green bases, and the Airfix cottages and Merit trees. That's a Bellona river in the distance. And Phil wants to find a place for a big ship model in the game, too.

The figures are set up at an angle to each other in an experiment to see if it means we can look a bit more at the sides of them. 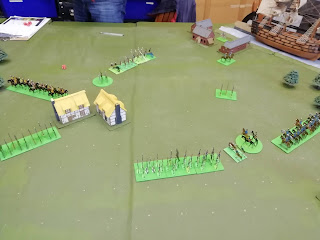 In this game Phil had more guns and possibly an extra base of cavalry. I had more infantry. Soon we were moving towards each other as fast as PIPs would allow, and marvelling at the command span rules for different types of command bases. 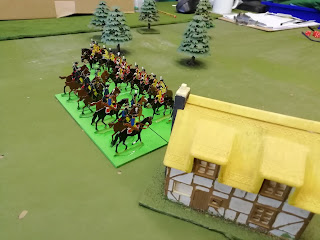 I charged with my horse, thinking I was a better classification. I wasn't. 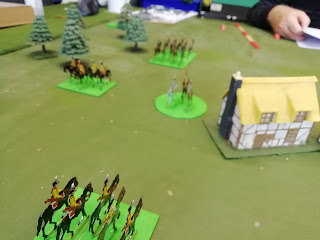 The cavalry stuff got a little bit confusing, with bases being repulsed and followed up and fighting multiple rounds of combat. It sort of worked, and was cleverly put together. Bit too much in the rules to learn quickly, as it is covering such a vast period. 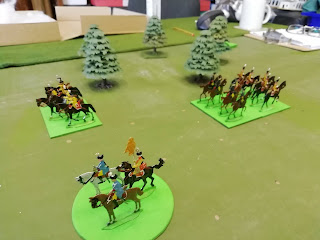 I've broken through here, and am following up. I lost the resultant combat on a 6:1 dice roll, and was driven off by the routers. 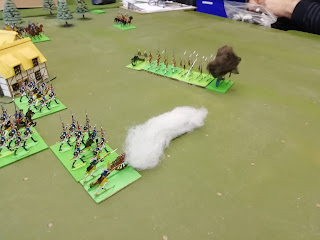 My infantry line got a bit disrupted by Phil's artillery, but then I blew up one of his guns, so that was all right. 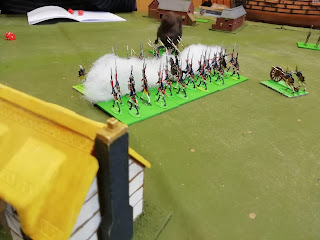 My infantry then got a "press home " outcome in the fire fight. This bit actually looked quite good. I liked how it worked (there's almost something like this in my WSS / Jacobite rules). 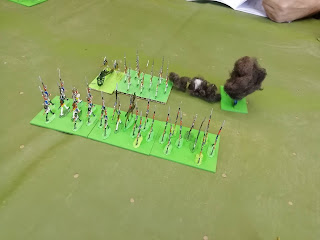 So I followed up and killed a base, and Phil dropped back again, and then we stopped because I'd won.

This was very much a trial game, and I can see Phil chopping large bits out and playing around with things to get the game back to a simpler core. It played okay (actually better than okay), and had some of the air of an 18th century battle, as we both worked our way through the rules and tried to understand what was going on. We also, I think, started to understand why it hasn't made it to final print just yet.

But whatever happens, I'm still not going to like PIPs. I mean, they're fine in DBA because of what it is, but I wish Phil B would move on. Sue L-B is the same, even a game about smugglers. Every game I see from them has PIPs in it. Please. No more.