I trailed a few shots of the fusilier regiments earlier in the year, but I've had a chance to finish  the tricorn wearing fellows over the last couple of weeks.

These figures are from the Strelets "British Infantry in Attack" box. You can see the basic figures here: link, and there's a review here: link. I bought the first box from my local model shop, as I hadn't realised they'd been released, and I like to support them when I can. I then picked up a couple of boxes at a show to enable me to produce coherent units.

First off, here's what I don't like about the figures. The line troops are good, mostly clean, castings, but the officer sprue is a mess, with loads of flash. The poses are a bit of a mix, with some that you really can't use in a battalion in a sensible way (I've used them anyway), and there are way too many grenadier/fusilier figures (and too many officers with spontoons). They'd have been better off with a separate box. On balance I would have preferred to have bought the "Firing Line" box. In future I will be buying the "French Fusiliers" box, as they have no grenadiers, and all the poses are usable.

What do I like about them? Well, the detail is nice and clear and well defined, the firing/charging poses are good. The officers look good once cleared up, and the fusilier figures aren't that bad either. They're also way easier (and cheaper) to get hold of compared to the Airfix figures I normally use.

It may upset the purists, but my main concern is that the hats are right, and I'll happily swap figures from different armies for this period. After all, my core figures are Airfix Washington's Army and Waterloo French Cavalry with hat swaps.

What this means is that mostly my "British Infantry in Attack" aren't painted as British. I've got 8 battalions out of them so far (I may paint up an ersatz grenadier battalion), with one Dutch, four French, two Scots and one English. The Scots are the fusilier battalions. 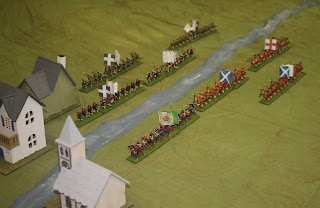 Here we have them facing off across a stream, offset by some of my repainted Christmas decorations. 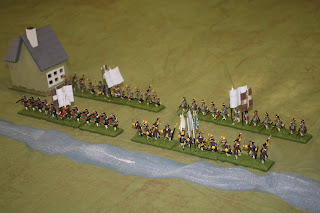 These are the Frenchies, the regiments of Champagne, Navarre, Alsace and Saxe. The regimental colours are scanned from the Funcken books, where I also got the uniform colours. I had to use the flag bearers in the boxes to make up the numbers, so they appear to have three flags rather than my normal two. 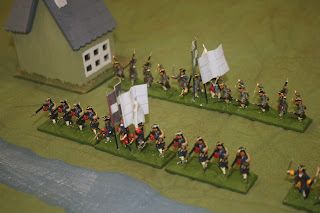 Close up of the Alsatians, who were lucky enough to get a convincing firing line. 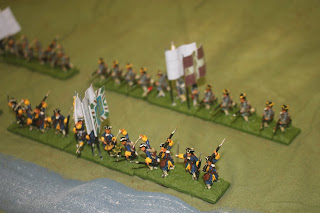 The Regiment de Saxe is a mix of attacking poses, which look great on their own, but less good in a line. 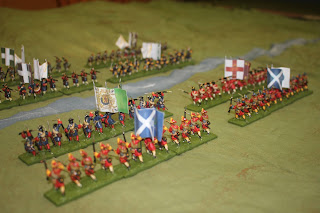 The British/Dutch are a mix of poses. The fusilier battalions I've written about before: link , when I noted - back in June - that it might take me a while to get round to the tricorn chaps. I was right about that. 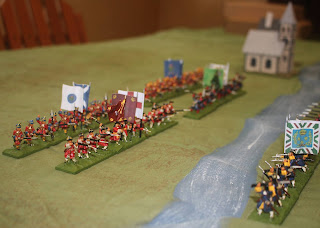 The English regiment is Lucas' with details taken from the Osprey. The Dutch are the Losecaast regiment, taken from the Pike and Shot Society's amazing book on WSS Dutch regiments (I don't have a copy - I sneaked a look at a friend's).
So, not completely accurate in terms of uniforms, with some odd poses hiding in their ranks, but they look okay on the table top, and they mix well with the Airfix figures.. I have some cavalry to do still (Airfix conversions), and a load of artillery I probably don't need as well, but might paint anyway. I then need to think about what I want to do with this army. It probably needs increasing by about 50%, and I see Strelets have some keen looking British Heavy Cavalry coming.
My conundrum is that I have mostly British regiments, which I increased so I could do the Jacobite risings. For continental warfare I need to balance them with more Dutch, and should consider Eugene's Austrians. If I bring them up to a good number, I'll need to add French to balance them out.
Still, that's a problem for another day. Next up are some Scythians, followed by some hoplites, I think.