A return to old Spain

The next publishing project is Spanish Civil War, using rules I wrote back in 2010/12 updated and revised. I've started work on the rule book from my notes, and have even fleshed out a cover.

It's a bit more colourful than earlier publications, and the picture is more ambitious in some ways, with the use of silhouetting and overlays and different transparency levels.

I'm not sure abut the type face yet. I normally use "Weathered" but that looked a bit dated for the period. I was looking for a art-deco type font, or one from the Republican propaganda posters, but I haven't found one that I really like yet.

Any-hoo, having nailed my publishing colours to this particular mast, I thought I'd better give the rules another run out on the table, just so that I know what I'm writing about when I prepare the final text. I was joined for this on-line visit to the Iberian Peninsula by Richard, Patrick and Jon. Richard and Patrick took the Nationalists, and Jon was the Republicans. 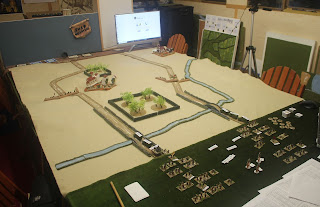 I've gone for an early war-ish period. On the road to Madrid, a column of Foreign Legion (1 x Bandera, 2 x Tabor + 1 x 77mm field guns), supported by a column consisting of Requetes, Falangites and Civil Guards are trying to force their way up two parallel roads, clearing out two units of Communist militia, one of Anarchists and a battalion of Peninsula Army, supported by a field gun or two.
The Legion are to the left, the paramilitaries to the right. Both Nationalist columns are in trucks. The communists are blocking the road near the river, and occupy the village in the far corner. The Peninsula Army are in the other village, and the Anarchists are dug in across the other road. 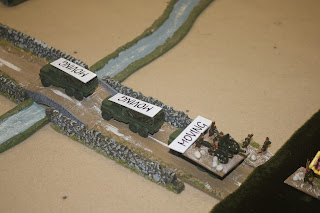 The Legion enter the board. The walls represent a sunken lane. This will give them difficulties later on in deploying the artillery. 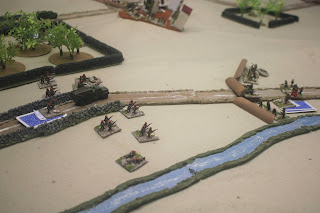 On the other road the Carlists drive aggressively towards the dug in Communists, and leap out, opening fire. The Communists reply.  The command system here is card driven. Each side gets a number of playing cards, and uses them to activate units. Depending on type of unit, not every suit can be used. You can keep playing cards of the same suit, but when you can't play anymore (or chose not to) you have to stop and pass the turn to the other side. Each action requires a card, and a unit can take three actions in a turn. If you want to co-ordinate an action between two units you need an extra card that needs to be valid for them as well as the card to perform the action. e.g. it requires three cards for two units to close assault. As we were on-line each C-in-C had a deck each. Normally I use patience cards and tuck them under the unit commander to record how many actions each has had. Here I just put cards down when the players called out their orders to keep track of who had done what, and so the players could see as well. Not pretty, but needs must. 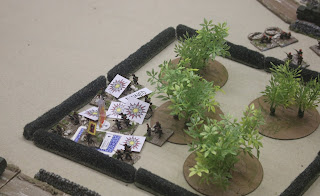 The Bandera had debussed into the olive grove, but immediately came under artillery fire, pinning them in place. 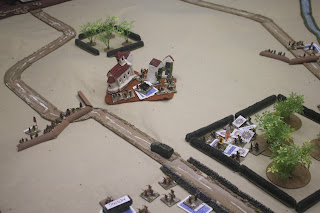 The Tabors motored up in turn, and dismounted into a depression in the ground, sheltering them from enemy fire. I have to do something about those buildings in the hill top village, leaning all askew. 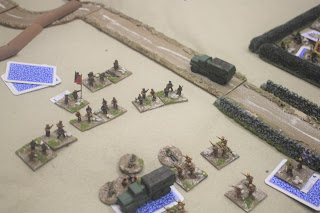 For whatever reason, Jon decided to launch an attack by the Anarchists. They rushed forwards out of their trenches and started to shoot up the Moroccans. 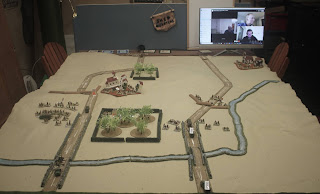 The second Tabor dismounted from the truck and formed a firing line. The Legion's gun unlimbered on the bridge (the only part of the sunken lane high enough to see out) and opened fire on the village. Its initial barrage hit the road on the corner of the Anarchist's original position. 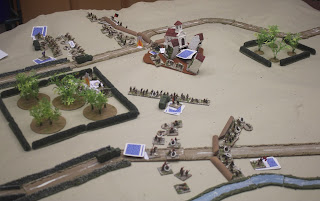 The Moroccans charged the Anarchists, driving them back in some disorder, but becoming pinned on their position in the process. The Falangites by-pass the Carlists, and form a firing line to shoot up the village, trying to take the heat off the Legion in the olive grove. 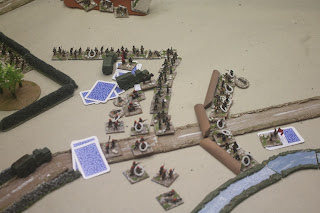 Finally the Civil Guards join the fray, lining up to give the Communists a hiding. However, that was pretty much the end of the turn, for that side of the table. 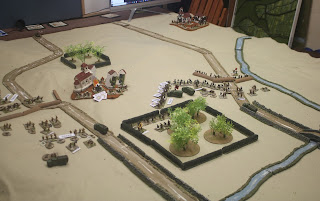 Elsewhere, you can see the Republican armoured support has turned up top left (they had a Joker), the Legion artillery corrected its fire and hit the Republican artillery in the town. This Pinned the gun, and lifted the barrage pinning the Legion in the olive grove. The Moroccans charged the Anarchists again, and drove them back once more. Jon's final card was also a Joker, and he got in an off table artillery barrage that he directed on to the Falange. 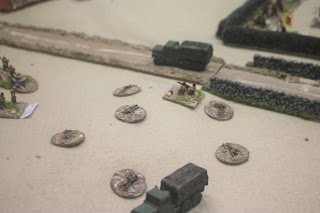 The next turn opened with one of the Tabors of Moroccans being caught in heavy small arms fire from the village, which wiped them out. 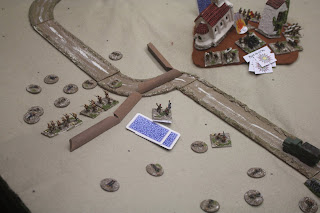 Their colleagues, however, had done for the Anarchists at last. 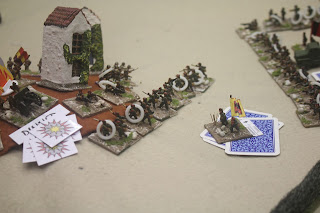 Dashing through the hedge surrounding the grove, the Legion stormed into the village. In the background the communists, supported by fire from the village, have caused a lot of damage on the Civil Guards and the Falange. 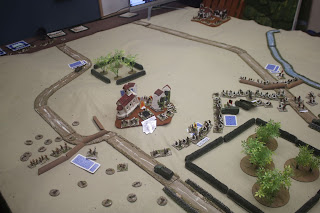 The Legion are thrown back in disorder after a short sharp front. The paramilitaries in the open have taken a lot of damage. 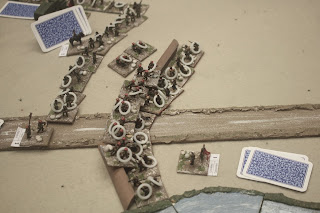 The Carlists, not to be put off, charge the communist trenches. No one is in good shape here. 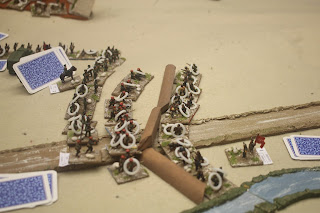 The assault isn't a success, and the Carlists are forced to retire. 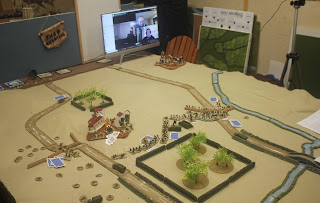 It's 11pm, and a school day tomorrow for some of us, so nearly done. The Moroccans line themselves up to storm the village, but the Nationalists are in a bad way, having taken a lot of casualties. 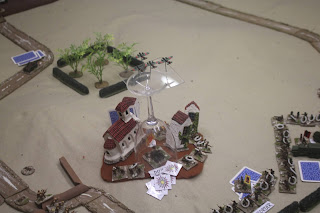 The final act of the game is Patrick playing an ace, which is an air strike. He rolls and gets heavy bombers, and the plaster the village. The eagle eyed amongst you will spot that these are Soviet planes in Republican colours. That's because the Nationalists were in another box, back in the house, and I wasn't going to go and get them just for this photo. Besides, bombing your own side had a sort SCW ring to it.
Thoughts? Well, my design approach has moved on in the last 8 years. I really want these rules not to use squares, for a change, but I kept thinking how squares would make everything so much easier. The unit activation system worked well, and I like the decisions it makes players take. The hand to hand system - an early precursor to the method used in IGABC - works fine. I had some issues with the firing mechanism and saving rolls, but I have some ideas as to how to deal with that. I'd like to get rid of the saving rolls, if I could.
So, some work for me to do, but the players said they enjoyed it, which is the main thing. I've got a week off next week, as we're doing some WoTR with Richard's wargame room back in action, so I have some development time available to me.
All looking promising. But I feel the need to acquire some more militia, and some of those bizarre armoured cars. And mortars. Need more mortars.