In the ether & in the air

This week we did a WW1 aerial combat game, with Richard's "Knights of the Sky" rules. We had a good turnout for the game, with seven brave souls prepared to do battle in the skies above the Western Front.

Jon, Will & I were the Germans, to the right, in the heavily armed but clunky Albatrosses. Chris A, Patrick, Steve & Ian were the Brits in the nifty little Sopwith Pups.

With poor communication, we worked on instinct. Will went off to deal with the two at the top of the picture, and Jon & I headed to face down the other two.

Our flying was intricate and surprisingly well co-ordinated. Perceiving the threat, one of the Brits from the top of the picture (Chris??) turned in to bolster his comrades. 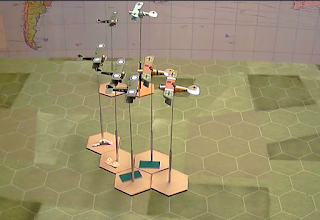 Jon & I lined up, and at close range we get to roll dice that cause more damage than the Pups do. This is important for us, as the British planes are much quicker round the table, so we need to pile on the damage when we can.
So of course, one of Jon's guns jammed, and the other missed. Both of mine jammed without even firing. It was going to be one of those evenings. 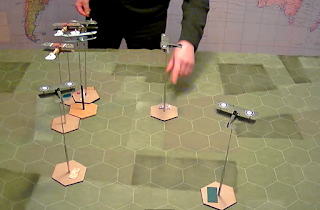 We flew past each other, and the combat got a bit more whirly. I had to avoid any fancy flying for a turn, in order to unjam my guns. That made it harder to get away from pursuit. 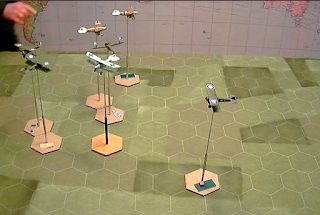 The Pups were certainly getting the better of us in terms of positioning, and they started to inflict damage on us. 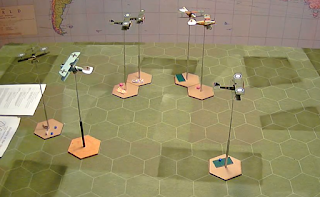 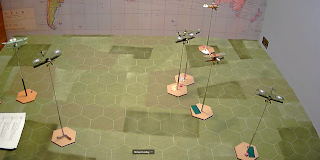 Then, just as I lined up a Brit in my sights (missed again, thanks for asking, but at least I didn't jam), someone got on my tail (Patrick, I think), scored a hit, rolled a double six for effect (really? These dice have sixes on them?), and my plane went into a tail spin. Patrick decided to pursue. 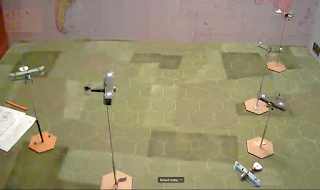 It didn't end well. Before I could recover my tail had been shot off and I was decorating the landscape.
In the end all three Germans were shot down for minimal damage the other way. I came back on (as did Jon), against the same planes. This time I changed tactics, and spent four turns climbing to a higher level. With a poorer performing plane this meant I could dive, gaining speed and manoeuvrability, and get on one of the Pups.
I did that, and still missed him.
Richard then thought it was time to end it all, as did my internet supplier, as my connection then went down. Thanks Gigaclear.
It's quick, easy to play (once you've got your head round the order codes) and looks good. The planes have washers on the bottom of them, and these go on the top of one of these: 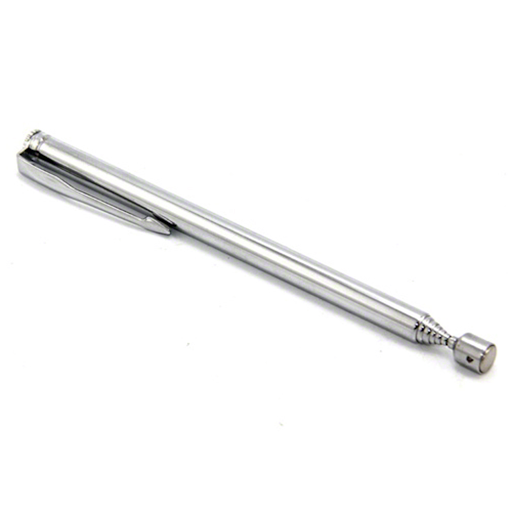 It's a precision magnetic retrieval tool. That's a strong magnet on the end of it. The pen clip unscrews, so you can replace it with a normal screw and so attach it to a hex base. Each height level in the game is one of tube lengths. It works really well. They aren't that expensive either, if you buy them in packs of 10. Personally, for what I need I'll be sticking to my wine glasses.
Hopefully we'll be playing that again. And hopefully I'll hit something next time.

Email ThisBlogThis!Share to TwitterShare to FacebookShare to Pinterest
Labels: WW1