My, my, it rained yesterday. Not just drizzle but full hammering down sheets of the stuff with thunder and lightening. It got so I could hardly hear Test Match Special as I was setting things up.

This week the Monday Night team met on Thursday, not Wednesday and Sumerians were back on the agenda.

As my current contract  is winding down I wasn't needed in the office, so I took the chance in the afternoon to help Phil out with some game design for another of his Battlefield Trust refights (Northampton this time). More on this at a later date, perhaps.

For the evening's entertainment we were joined by Chris W, and we had another go with "To Ur is Human".

Since we last played the rules I have sat down and taken a serious look at the odds of events happening and also the factors that I was using. The two main mechanisms in the game are the Fear Test and the Hand to Hand combat system. The intention is for the Fear Test to be the most important, - whether you intimidate your opponent or not has a major impact on the outcome of the eventual melee. In fact at the extreme end of the probability spectrum it doesn't happen at all as the recipient of the charge heads for the hills.

So I made sure that factors were not double counted, - being attacked in the flank appears in the Fear Test or the Hand to Hand rules, but not both, for example. However the two mechanisms are linked as the two sides' expectations of the outcome of hand to hand combat has an influence on the Fear Test taken before the impact takes place. Having done this I then plugged all the likely dice rolls and their percentage outcomes into a spreadsheet with the other factors and unit quality ratings to see what would happen. This enabled me to fine tune factors and outcomes so that extreme results can occur but are acceptable as extreme results.

The two armies I set up for the game had different strengths. Phil got the army with all the heavy shielded infantry. Chris got the one with all the missile troops. I think it is fair to say that it didn't really matter what Chris got, it all went badly for him from the beginning. 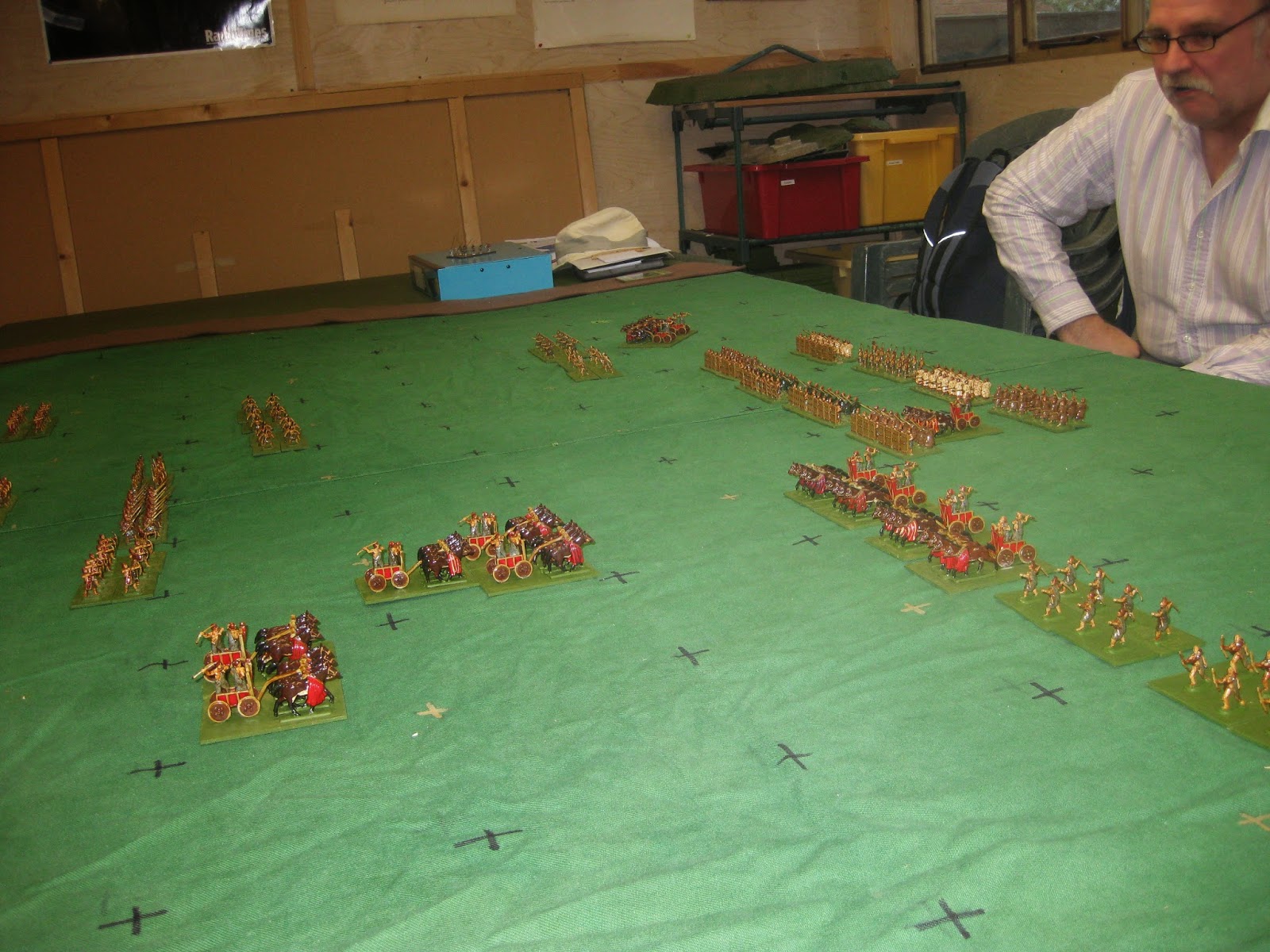 Chris hasn't spent as long on this particular rule-writing journey, so he isn't as in tune with what I'm trying to achieve as Phil might be. Even so, he started off aggressively in the first turn, pressing forwards with his battle carts. 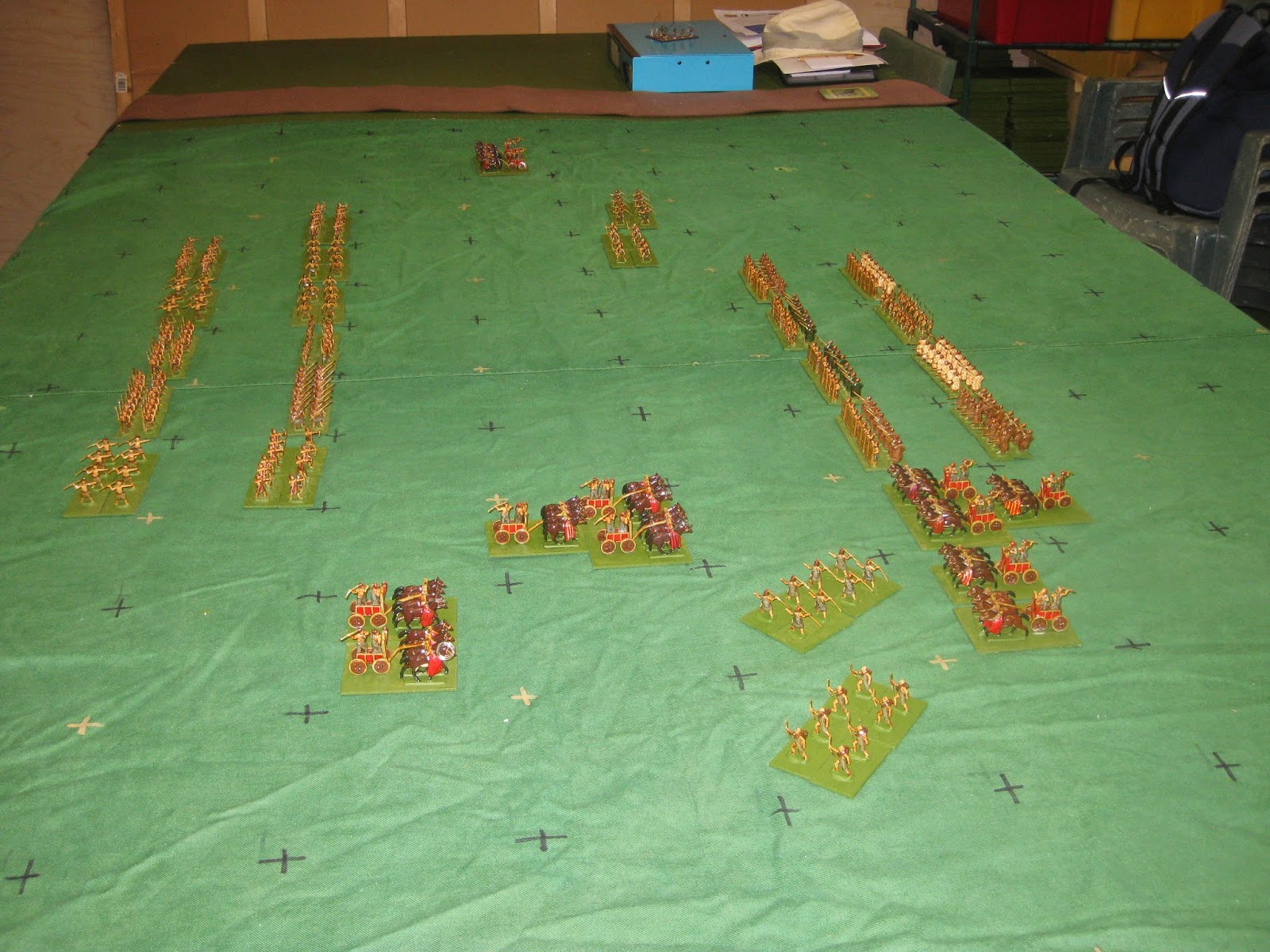 Phil responded with a steady advance, and pushed his light troops forward to try to inflict a few hits before the inevitable clattering of carts into each other. This proved to be both successful and prudent. 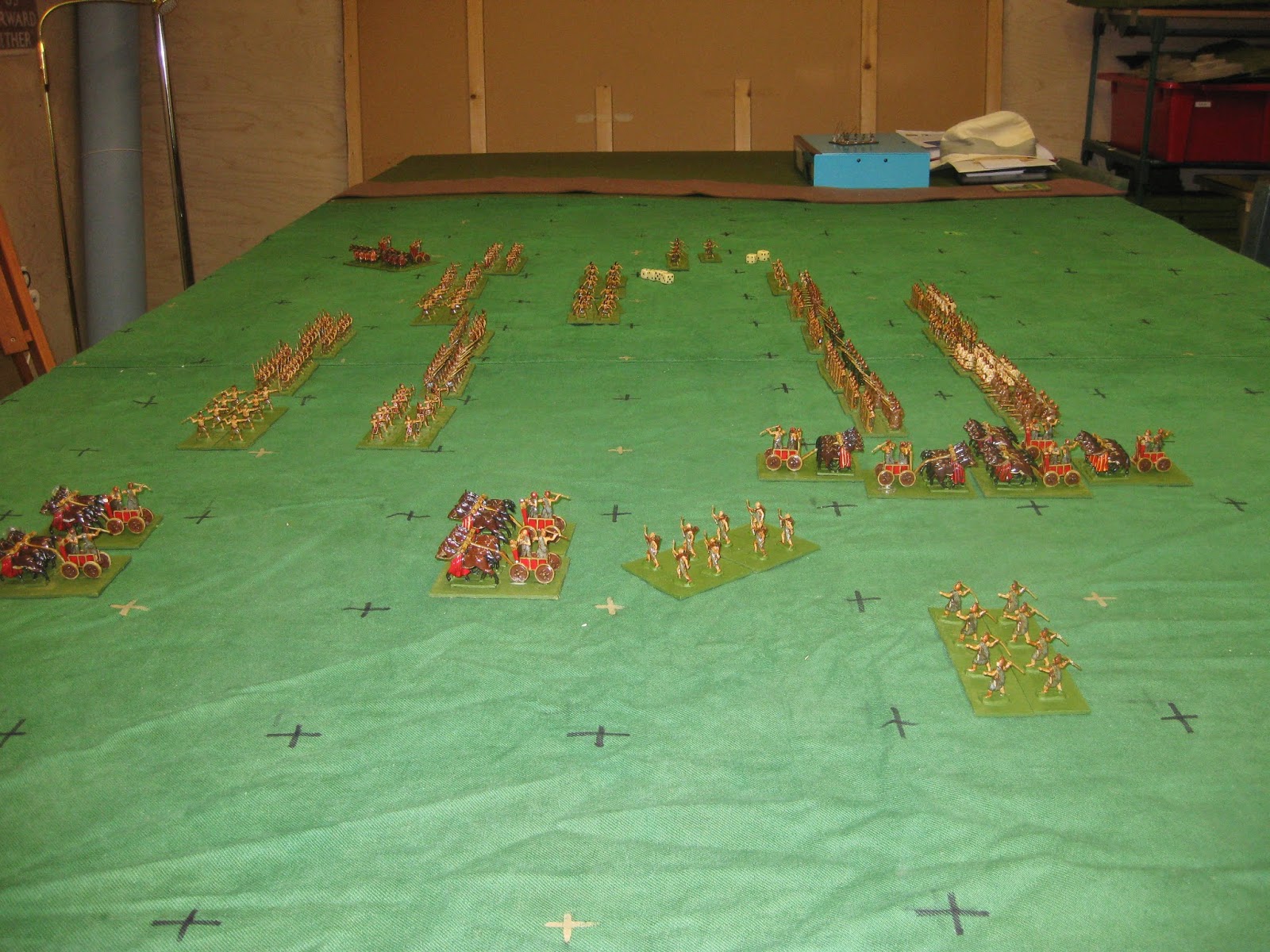 What happened next sort of signalled the tone for the evening. When the carts revved up to run at each other, Chris' faltered and dropped from Fight to Flight (extreme die roll result). When they closed it happened again and soon some Elite Battle Carts were headed for home, pursued by their opposite numbers. The other pair successfully locked metaphorical horns, both lead by their generals. Before we knew it, Chris' unit had evaporated (the extra hits inflicted by the skirmishers turning out to be key). His general fled to find shelter in the middle of his line. 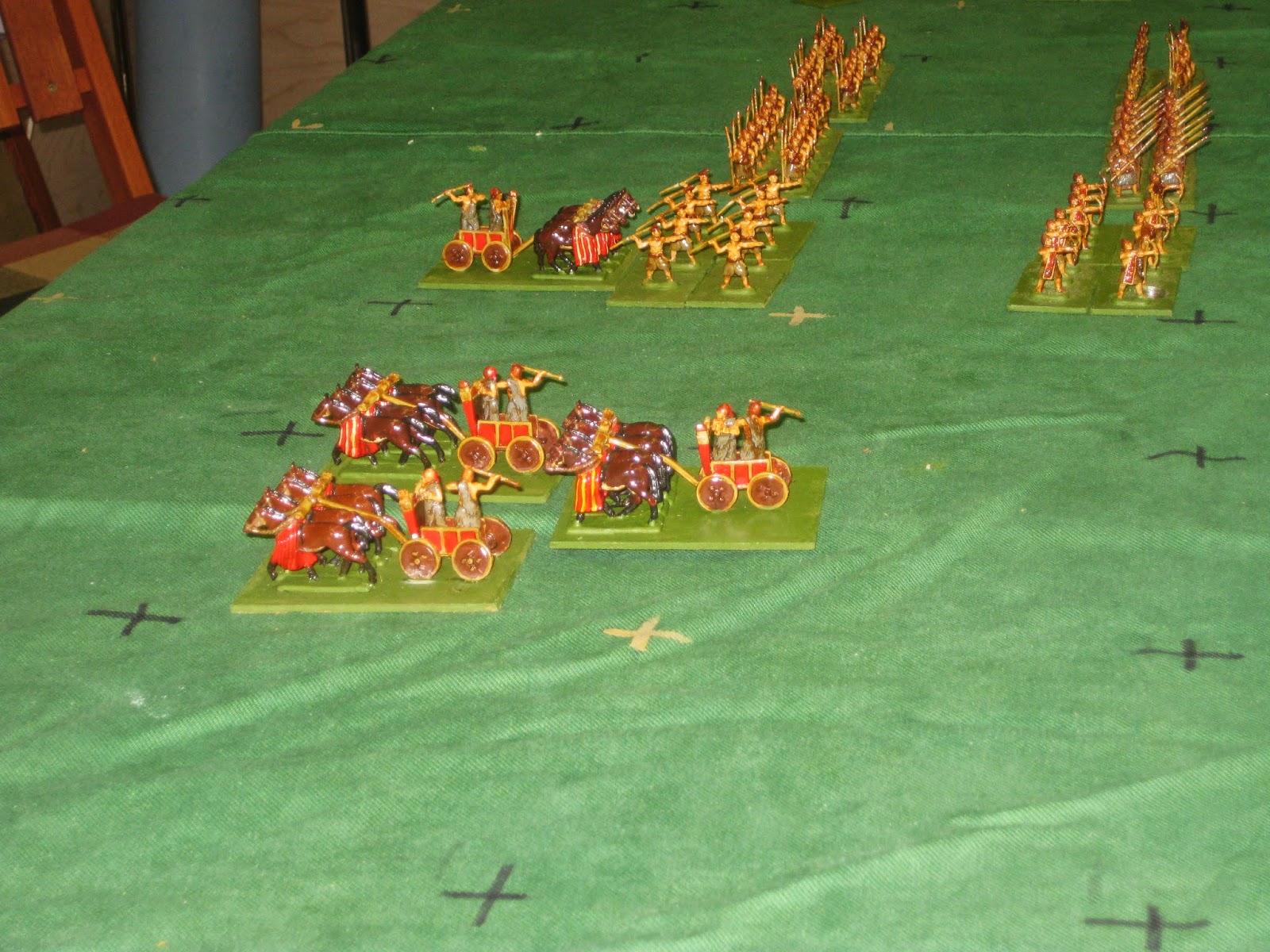 He rallied the first cart unit that was broken, only for it to be driven off the table in the next round of combat. Still, they lasted a move longer than looked likely. 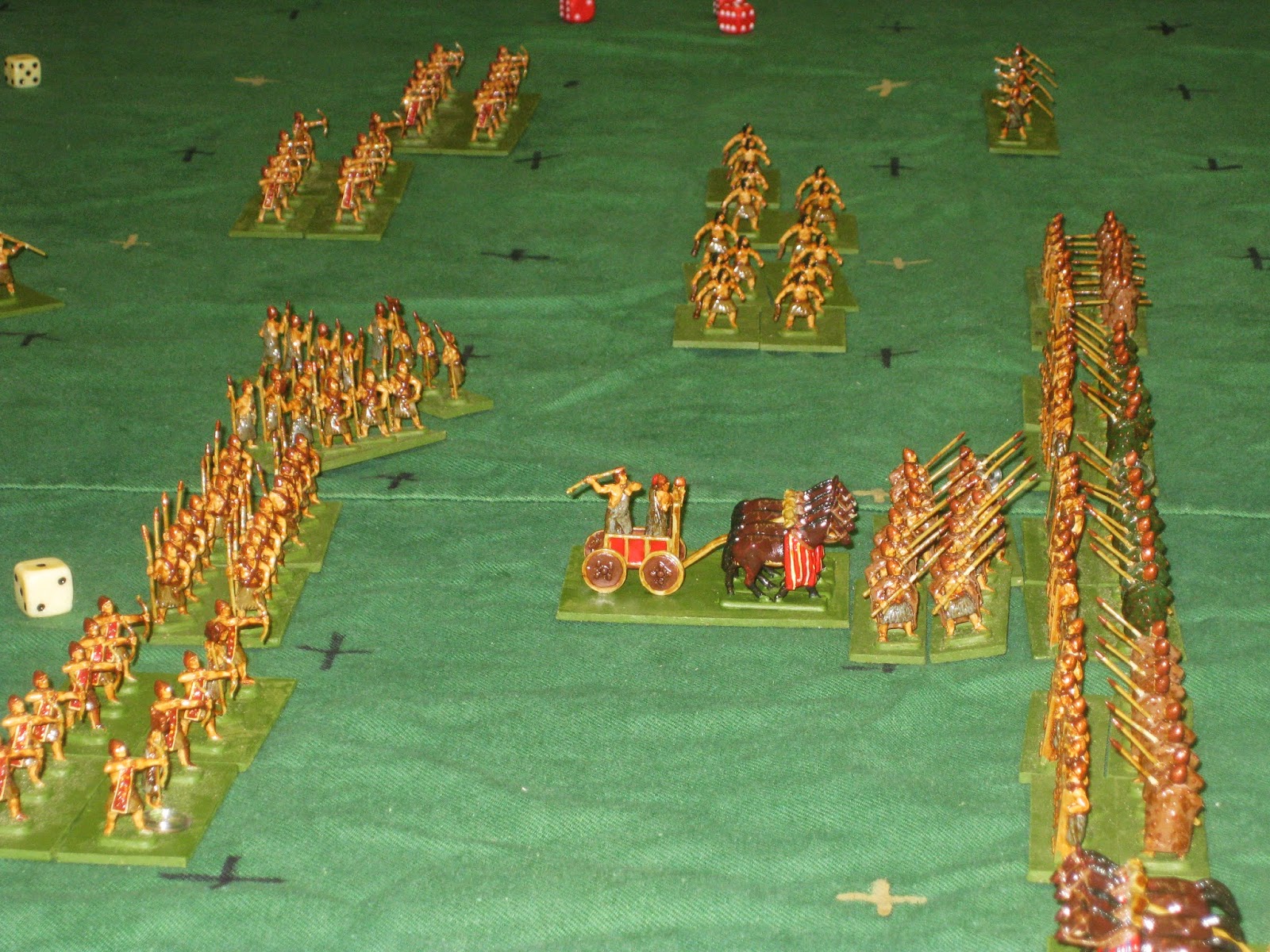 Perceiving that the fruits of the battle might go to the brave Chris launched charges all along the centre with his foot. He needed to get on with it, as Phil's right wing carts looked to be flanking the end of his line. Alas not everyone charged, and one unit dropped a Fear Level. 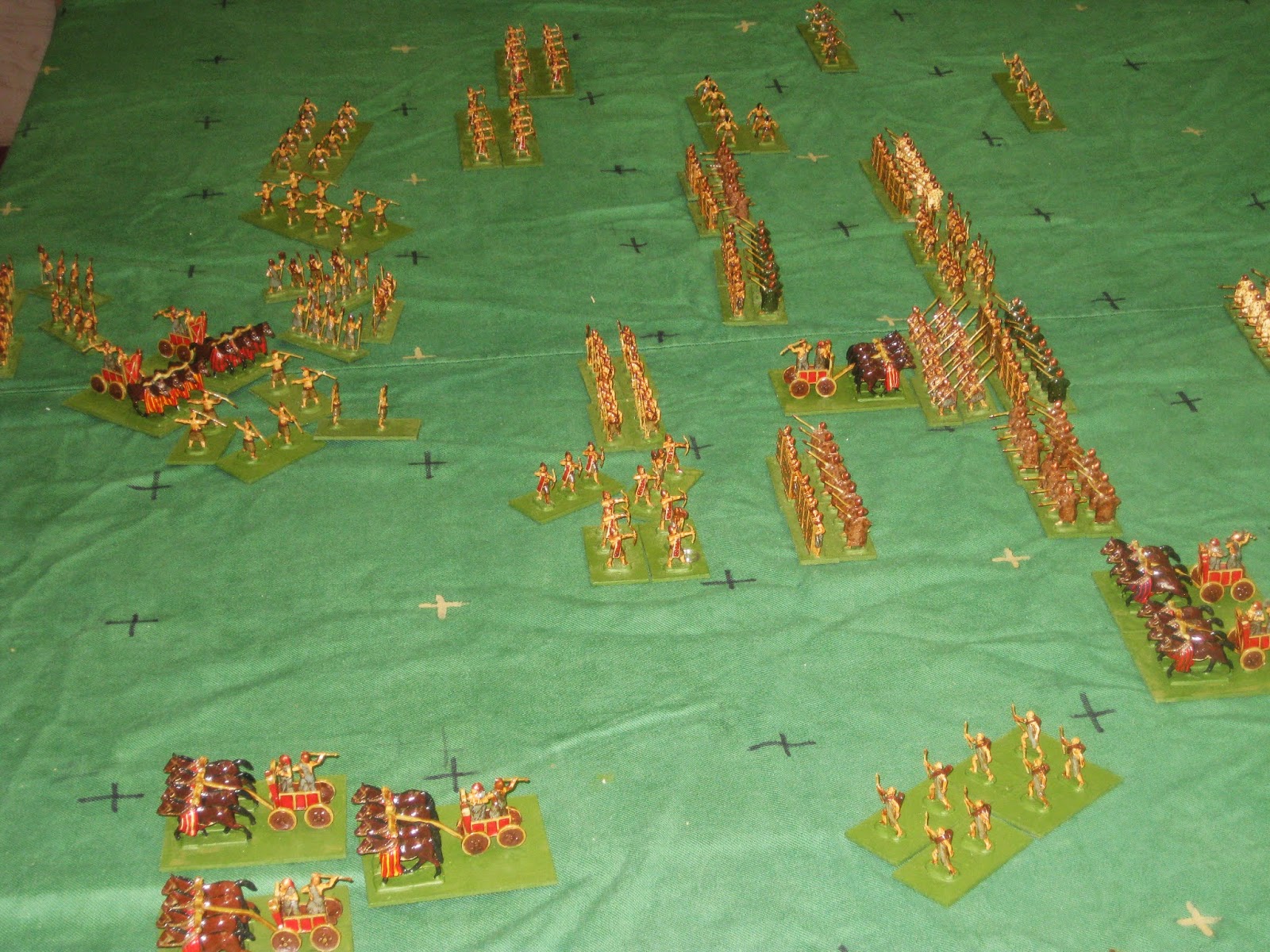 The central fight was indecisive, but when Phil counter-charged the following turn where Chris had previously failed, Chris' unit broke. 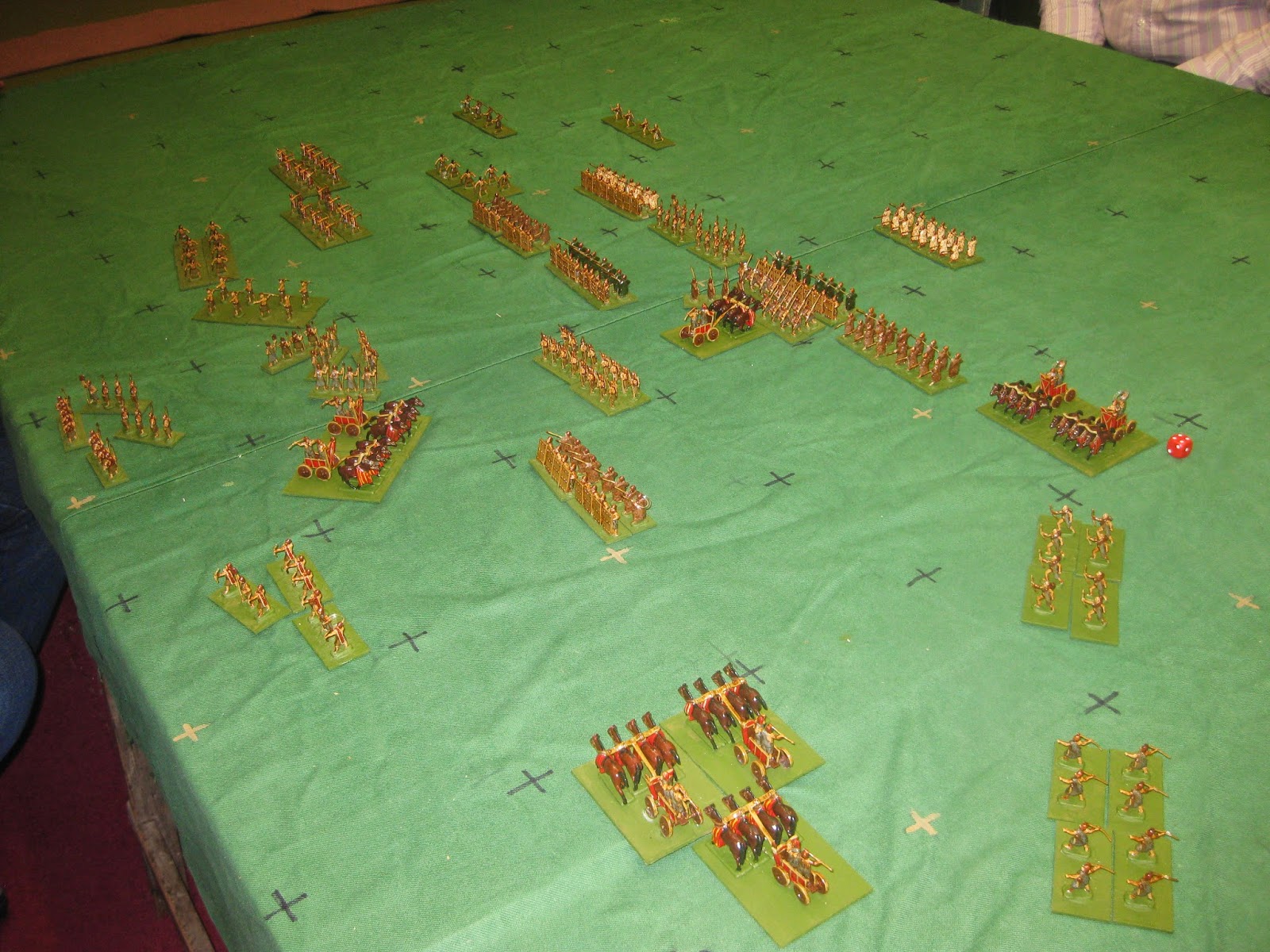 The game had been pretty much one way traffic. Chris missed a few tricks (he didn't maximise his advantage in missiles), but mostly he was on the wrong end of a number of 1:6 opposed die rolls. Often he slipped a Fear Level by one point.

The game took about 90 minutes with no terrain. I think that I have finally cracked the rule structure and the relative values of the die rolling and the various factors. I've got the balance I want, and just have a couple of bits of clarification, then the game is ready for CoW.

A very satisfactory evening's work.
Posted by Trebian at 20:11

Email ThisBlogThis!Share to TwitterShare to FacebookShare to Pinterest
Labels: Shedquarters, Sumerians, To Ur is Human, wargaming, wargaming in sheds