Giving it another chance

Absence makes the heart grow fonder? Or just a soft touch for a lost cause? Or just wanting value for money for an expensive purchase? Whatever the reason, "Black Powder" made a return to Shedquarters this Monday. 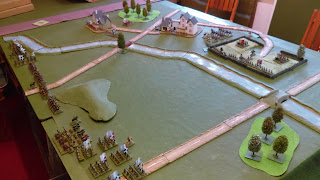 In fact it was inspired by the suggestion that I might be taking part in a BP game later in the week, so it made sense to get a refresher.

Consequently I dug out my War of Spanish Succession Airfix plastics, and filled the table full of terrain. On this occasion the Anglo Dutch are defending the top right of the picture, the French attacking from the bottom left. I had the French, Phil the Anglo-Dutch. 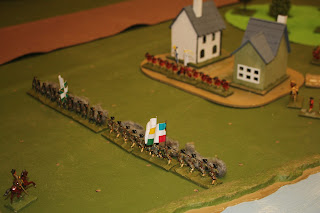 I advanced steadily on my left, volleying the troops occupying the small village out there. 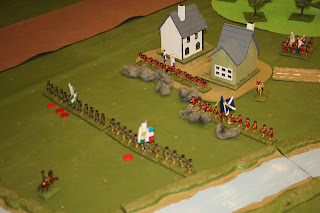 They returned fire, and I got the worst of it. Still, plenty more subjects of the French King to fill their spaces. 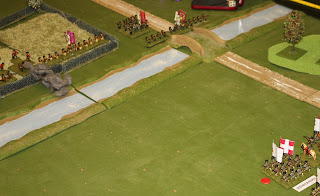 As I said, Phil was playing the Anglo Dutch, and I had the French. We were a bit thin on the ground for a regular evening. He opened up with his artillery as I threatened the right hand bridge. 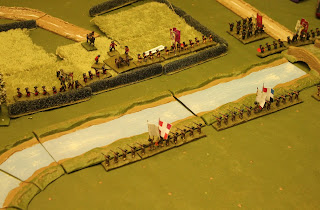 Regardless of this barrage, I was able to bound forward and seize the river line. My right flanking manoeuvre has stalled due to bad command rolls. 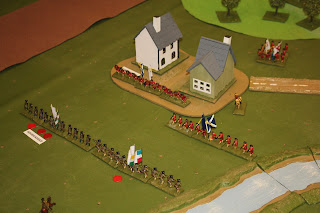 The musketry exchange continued on the left, and I was getting the worst of it. 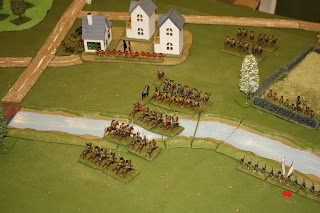 The moment had come to launch my massed cavalry charge in the centre. Unfortunately my Guard cavalry were bounced conclusively by some countercharging Dutch cuirassiers. 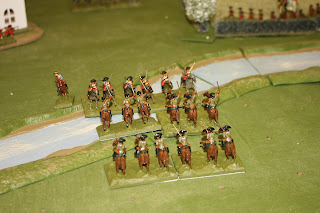 Phil followed up with a "Sweeping Charge" or whatever it is called... 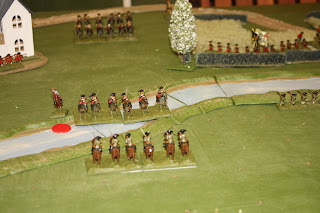 ... and overran my second line too, although this time I inflicted some hits. 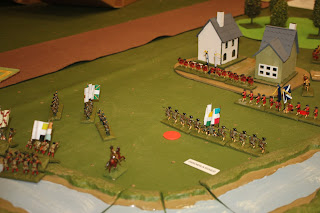 Meanwhile, back on my left one of my infantry units broke under musket fire. 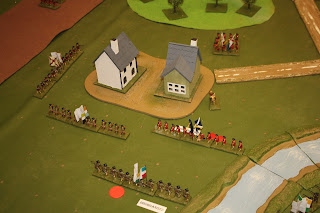 I was able to rush up reinforcements and using a combination of front and enfilading fire did for the British infantry in the village. 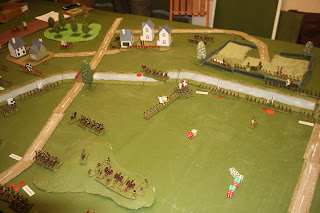 Time to step back and survey the full picture. My artillery deployed on the hill couldn't hit a thing. To protect my flank on the river assault I had formed up an infantry unit to their left. The loss of the cavalry fight had rather opened up my centre quite badly. Over on the left I've got more infantry lined up, enfilading Phil's British again. 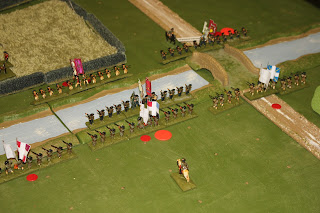 Having achieved fire superiority Phil counter-attacked across the river on the right, inflicting a lot of damage. 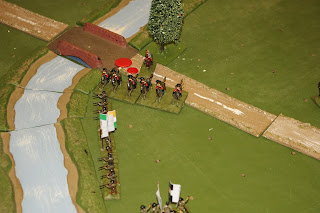 He was also able to counter attack on the left, hitting the flank of my line with a cavalry charge. You will be astonished to hear that I survived this attack.

Up until this point BP had been behaving itself fairly well, although the poorly written rule book doesn't help if you have any rule queries. Important rule points are buried in paragraphs of rambling text, and cross referencing in any sensible fashion is largely absent. The book really needs a proper index. However we had a couple of bizarre outcomes such as the flank charge here mentioned, and another on one of my lines on the left. 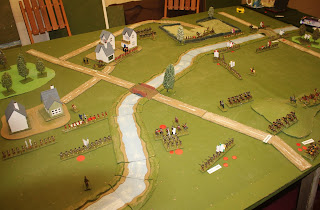 We ended the game with the armies looking like this. I had failed Brigade Morale for two out of three Brigades, so my army was done for presenting Phil with a win.

BP continues to infuriate me. The command sequence has a lot of merit, but it clearly works better when you have a lot of units to enable the random (I use the word advisedly) effects to even out. On the plus size you can use any size units with it, as long as you are consistent. Of course that does mean that the ground scale is complete garbage, but you can't have everything.

I know that for a WSS game I should have used the "Last Argument of Kings" supplement, but I've seen that and it's mostly garbage*, putting sticking plaster over an already flawed system. Bear in mind, of course, that the basic rule book promises to cover the WSS** anyway, - something the writer of LAOK makes clear isn't the case, as units under BP perform in a way that is alien to the start of the 18th century.

On the other hand it passed the evening pleasantly enough, with a lot of figures and terrain on the table, which is pretty much the justification for BP. I just tend to think that there's more to wargaming than only that.


*Although it is an absolute gem compared with the total waste of paper that is "Zulu".
** Note, however, that it refers to it as "The Spanish War of Succession", which is a thing that doesn't exist.