It has been a busy last week or so, and the blogging seems to have slackened off a bit, so here is a round up of the games I've been playing.

I was a bit involved in things over the previous weekend, so I turned to "Hammerin' Iron II" for Tuesday evening's entertainment. 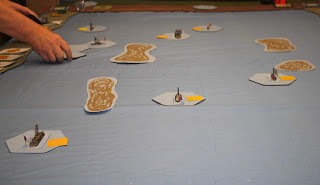 Will and Tim turned up for the evening, - a bit of a drop from previous weeks, although Phil joined us at the end for a chat. I set up an engagement battle with equal points aside. The Rebs were all ironclads but the Yankees has a couple of big heavily gunned ironclads and a small flotilla of wooden ships. The arrival dice staggered the times the ships turned up, but kept it interesting. 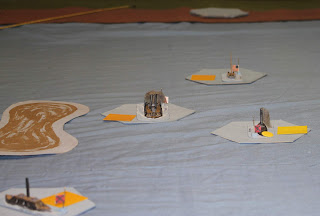 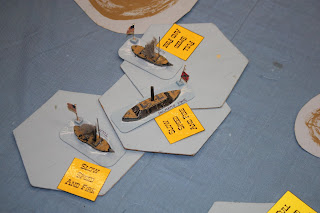 In the first encounter the Palmetto State took on the Tulip and the Fuschia, lining up a pretty good ram on the Tulip. 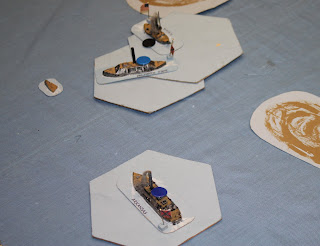 The Tulip went down easily enough, but the Palmetto State took enough damage to hamper her considerably. The blue marker indicates she has a maximum one hex move speed, which is a real problem for a ram ship. 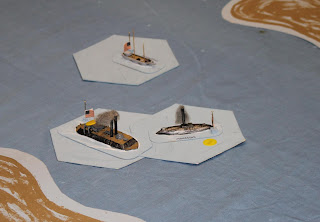 And then the Manasas got a pretty good hit on the Cairo, alas both ships were disabled, and as the Cairo has a broadside and the Manasas a singe bow chaser, it didn't look good for the Rebel ship. 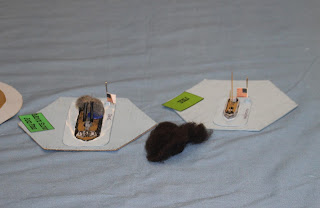 Sure enough she soon caught fire and sank. 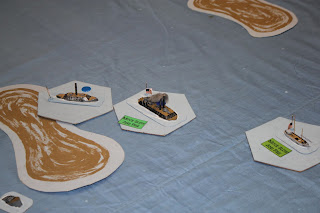 This is the last picture I took, which is of the Palmetto State trying to ram the Cairo. By this time the Cairo's sister ship, the Carondelet, was on the table, meaning it was all pretty hopeless for the Rebels.

Another successful run out for the fleets, and much enjoyed by both players.

We rounded the week off with a multi-centre game on the Yom Kippur War crisis, like the one we played in February. 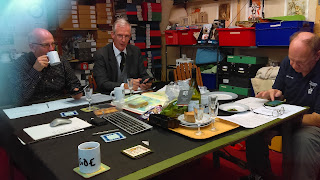 Shedquarters represented the White House in this game, with Chris K as Tricky Dicky, Phil as Henry Kissinger, Will as Schlesinger (Defence Secretary), Gary as Moorer (Joint Chief of Staff), and me running the CIA. Other teams scattered round the country played the USSR, Egypt, Syria, Jordan and Israel.

We were all connected using Skype, text messaging and a WhatsApp group dedicated to the game. It went very well, with much fun had by all. The Egyptians settled for limited objectives, and sued for peace as soon as they were over the Suez Canal. Israel accepted that and went all out in the Golan, fighting the Syrians to a stalemate. The Soviets funnelled in tons of supplies whilst offering to organise peace talks. We managed to keep our heads cool and avoided an oil embargo whilst ensuring Israel's survival by threatening to resupply her, without actually doing so.In the end we agreed to host a 6 nation peace conference with no preconditions.

Well done to Ian Drury, who organised it all.
Posted by Trebian at 19:48