I haven't got a lot of painting done recently, except for the naked Gauls, so I set aside some time this week to do a unit of Zvezda Greek Hoplites.

These come from the boxes I got on the cheap at Peterborough. The thing is with hoplites is that I'm not a massive fan of them as an army, - they don't really do anything for me. However, for the periods I am interested in I sort of have to have them. And often need quite a lot*, so acquiring a load on the cheap was gratifying.

Still have to slog through the painting of them tho'. The figures are quite nice, it has to be said, although the boxes include a few too many swordsmen who can't be converted to spearmen. I therefore decided that I'd do a unit consisting entirely of swordsmen, representing the melee after all the spears have been broken and people are getting properly stuck in. 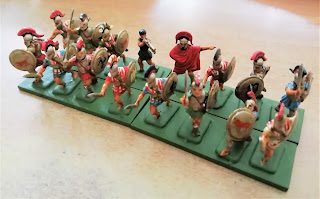 I took these pictures with my new phone. It's still a budget model, but the camera is amazing. You can clearly see the really crap paining on the shoulder fastenings on the linen cuirasses. 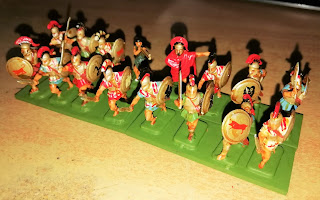 Even with my limitations, they've come up really nicely. I've got a couple of units of spearmen sitting on the desk to paint, now I've worked out how to convert them to holding the spear vertically without doing too much surgery to the figures.

The shield designs are transfers from Veni Vedi Vici, intended for 20mm Hat Hoplites. The Zvezda figures came with raised designs on most of the shields but I carved them off, which gives them a slightly battered appearance.

I think they'll do.


*I have a similar issue with landsknechts/Swiss. I could really do with more of them, but have no desire to increase my 25mm metal collection
Posted by Trebian at 12:20