A Board Game In Spain Again

About six months ago I posted a report of a game I played with my boardgame buddy, Gary, from a Polish company about the battle of the Ebro. The report was favourable, and we both enjoyed it with me sneaking a victory right at the end with the Republicans.

For our monthly game in January I thought we should dig it out again and play the second scenario, which focuses mainly on the fighting around Grandesa. For this game we swapped sides and I took the Nationalists.

The game victory conditions this time are for inflicting step losses on the opponent's counters, or either side can get an "instant victory" by taking two cities in the enemy's controlled areas. Gary had to capture Grandesa and Fayon, and I had to take Cordera and La Fatarella. All except Fayon are in the central part of the battlefield. Fayon is in the North, or left hand end of the board in the photos.

The Republicans start with a lot of stuff around their two objectives, or so it seems. The combat mechanism is a bit curious. It has a straight odds comparison, then the terrain and other modifiers then shift the combat odds by a column. Thus a 12 strength points in "field fortifications" (ie dug in) attacked by 60 strength points is initially a 5:1, but you get two shifts for being dug in, so making it 3:1. If you have more tank units you get a shift for each extra unit. Tank units aren't very strong on their own, but combined with infantry and artillery the shifts they bring can create a breakthrough. This encourages combined arms attacks, so a big thumbs up from me.

The map is very terrain heavy, so the defenders are normally getting at least one column shift, and these are cumulative. The CRT also mainly gives retreat results, so destroying enemy units is really hard, and you need to surround targets to destroy them. The terrain slows movement down a lot, so this is hard to do as well. This means a lot of thinking is required. The first turn took over an hour, - although we played all 8 turns in about 5 hours in total. It was tense all the way through. 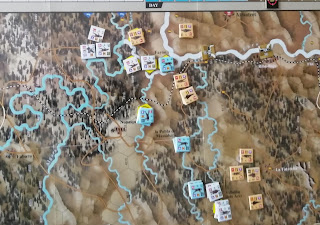 Gary started with an attack on Fayon. Despite surrounding it the defensive modifiers - and Nationalist defensive air support - bounced him with losses. This came as a shock, and heavily influenced the rest of the game. Essentially I think he decided he couldn't break the position, and so didn't really try again. 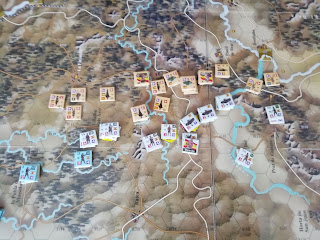 In the centre he didn't press in the first move, which enabled me to throw up field defences (the yellow counters under the stacks). 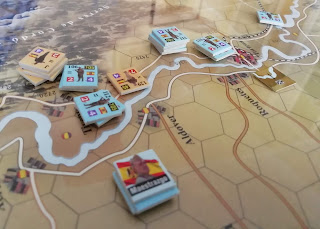 After a bit of fencing around we started to get stuck in on the southern flank. This is a gamble that nearly blew up badly for me. I reckoned neither of us was going to take our objectives anytime soon, so I was looking to inflict step losses to build up a VP buffer. I was a few points ahead, and was going for a surprise hit, by chancing a couple of evenly matched combats. Played in the right order I should have been able to bounce at least one unit and then take losses off him as units would not be able to retreat. What happened was almost the reverse, and I had forgotten to put defensive troops in with my artillery (which is under the HQ unit). Gary would pounce on these next turn, and I nearly lost all of them, but he was unable to get behind me, so I was just bounced 3 hexes across the board.

BTW don't the board and pieces look nice? 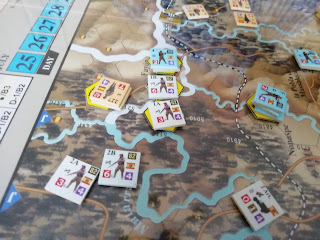 In the north Gary has dug in and pulled most of his troops out to reinforce the centre. 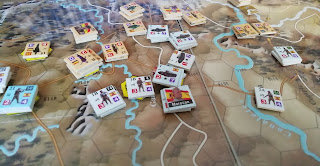 In the centre I've tried to break through with an armoured spearhead. All I've done is stick some units in a salient. However, I'm now about 6 VPs to the good, so I can start to think about just defending, and making the Republicans come on to me to even the score up. 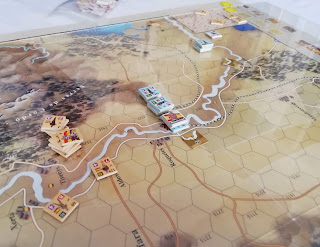 In the south I've extricated myself from the mess I was in, and have consolidated my forces, so I can turn Gary's left flank. 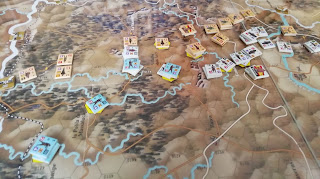 I managed to get my troops out of the salient with minimal losses, and then developed an attack on my left centre towards La Faterella. I thought this might panic Gary a bit and draw his forces in so I could break through elsewhere. 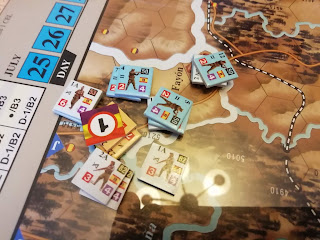 I was then able to counter attack out of Fayon at the units Gary had dug in up there to pin me in place. Reinforcements helped and I was able to surround them and put them out of supply (that's what the "1" marker means). I reckoned this was 4 VPs waiting to be plucked if I did it right. 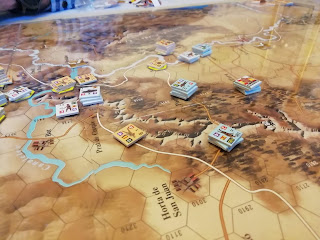 In the central highlands Gary's got a unit round in my rear areas. I think he reckons he can pinch out that stack in the centre left with the tank on the top. 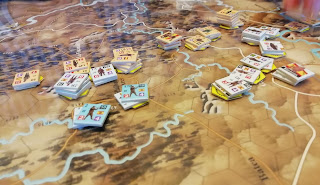 My attack towards La Fatarella fizzles out a bit. 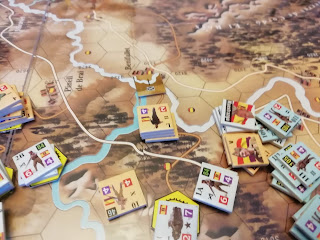 Having suckered Gary in to attack that unit in the mountains I'm able to throw everything else I have at it and surround his HQ unit with its supports. 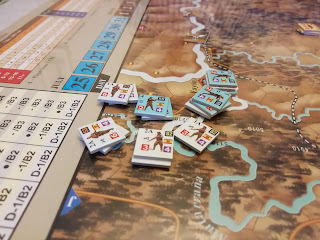 In the North the Fayon counter attack is completely successful. 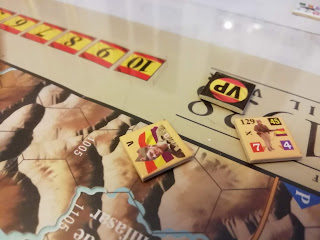 And the attack in the highlands is successful too, - killing the HQ unit and supports. I'm now +12 on the VPs with the last turn coming up. 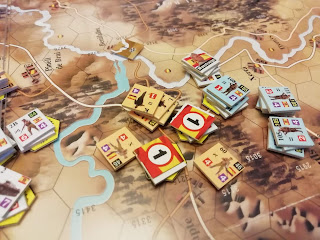 A last ditch Republican attack in the highlands results in us exchanging losses, which suits me fine. 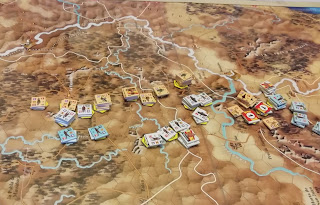 This is the final position. Having got ahead I was able to dig in and force Gary to attack me, which he was reluctant to do with out some certainty of victory.

So I won by a big margin in the end, but the game was tense and on a knife edge for a lot of the time. A bad turn and the thing could have flipped. We both made mistakes - bad mistakes - but I was lucky enough to get away with mine. I think I also developed a strategy earlier in the game, - moving second in each turn can be an advantage, especially early on, if the person with initiative doesn't know how to exploit it (I'm sure I wouldn't have as well).

I think this is winnable for both sides, but it is probably an easier hand for the Nationalists.

I like this game a lot (okay so I've won it twice). There are some slight issues with the rules but it plays well and forces believable tactics that look like what both sides were trying to do. What worked at the time works in the game, and it is quite a head scratcher at times. And it does look nice.

PS The system has a hidden movement mechanism that we didn't use. You have counters to put on top of your stacks to conceal what is there until you attack. It's a neat idea for a future game.