As part of the Northamptonshire Battlefields Society commemoration of Edgcote's 550th anniversary Phil is working on a model/game to go on our stand at the shows we attend.

This one is going to be in 28mm instead of our usual 15mm. I painted a load of figures for the model a while back (see this post) and then handed them over to Phil to base up and finish off. He was working on the cavalry, wagons and the rest of the foot and the game board. And the rules. So most of it really. 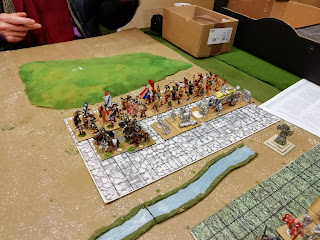 This was the first playtest in a while, and it's still a work in progress. A lot of the tension in the actual campaign derives from who is where, and whose reinforcements will arrive first. Consequently there will be a number of off table holding areas, 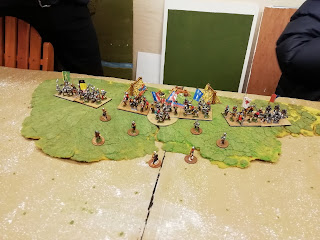 This is William Herbert on Edgcote Lodge Hill. We were experimenting with some outlying skirmishing bowmen, so that Herbert was not completely devoid of missile support. 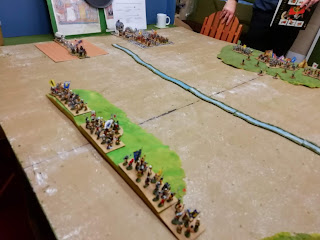 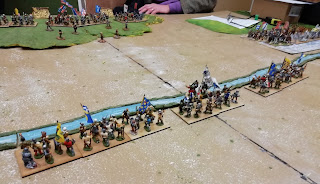 I had the initiative and advanced to the stream. I need to get across the stream to be able to shoot at Herbert's forces. It is physically too far in the real world from here. The problem is that I need to do that, then retire back across the river without it causing me too much disruption but still providing a defensive line once we're over it. I'm afraid at this point we were learning that the layout of "Hail Ceasar" is not your friend when learning, even with the rules summary appendix. These rules would not be my first choice. I do not feel they simulate Wars of the Roses combat well (NB this is different to "giving a good game with Wars of the Roses armies"). 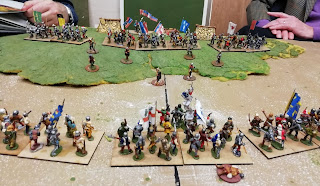 So I crossed the river and lost the archery exchange with the skirmishers, despite all my units having a bill/bow mix. Such is the way with heavy dice rolling games. My personal view, which Phil later agreed with, is that there's no need to have the skirmish unit in Herbert's army. He doesn't agree with me that it should be part of Robin's but he knows the issue that needs to be resolved which I was suggesting this would fix, and he has a keen eye for getting this type of detail right. 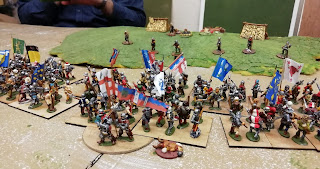 The main battles clash. You'll see that Sir Richard Herbert has passed through the enemy battle, wielding his poleaxe. The armies had a slight disparity in unit sizes and layouts. What the play test showed was that didn't work as expected. We had some problems tracking down the polearms rule. We only have one copy of Hail Caesar, and it doesn't belong to either of us. 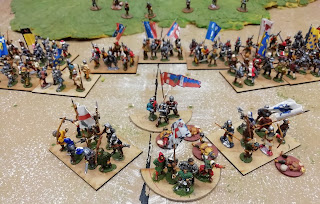 The Herbert brothers shattered my central unit. My archery had been ineffective, and I lost the hand to hand combat dice off quite badly. 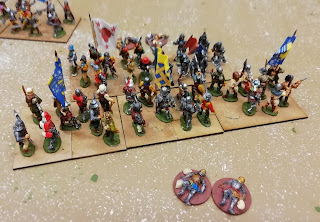 I also got pushed back on my right by the heavily armoured Welshmen. 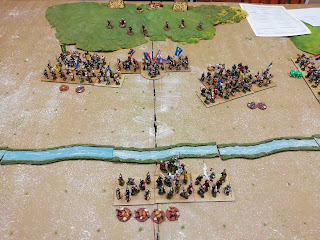 In the centre I had rallied back behind the stream. 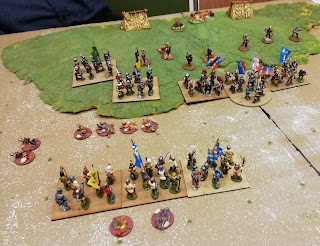 And then on the left I got lucky and broke the other one of Herbert's units.

Okay, so it didn't look much like Edgcote. The reinforcements never arrived, and in any event, looking at the factors they would not have been decisive. We have an issue with the way the battle line fragmented. That's just not right. We need a way to create more of an ebb and flow, so we can get several phases in the game.

We also need a way for Stafford, who bunks off early before the battle, to rejoin the fight in exceptional circumstances. We looked at a sort of "humble pie" mechanism for Herbert, where he can give away kudos/credit in exchange for Stafford's support. I think that the standard HC victory conditions have an issue because of the size of the game, and a break point/reverse victory point track with appropriate markers (skeletons doing the medieval "Dance of Death" is one idea) that would work. Phil is keen to have a "wheel of fortune" mechanism, and end up with a round playing area too. I shall be intrigued to see how he makes that work, as it is an attractive idea.

As I said above HC would not be my first choice for a rule system, and also wouldn't be in my top three. In truth I would go for a bespoke games system entirely, sort of like "Northampton 1460", but that's just me. Phil has a clear vision for this project, and I understand and support what he is trying to do. Thinking further about it perhaps the side that gets its reinforcements to the battle first wins, unless it has already lost, if you get my meaning.

So Phil has a way to go yet, but expect to see this on our stand over the coming year. Stop by and have a game.
Posted by Trebian at 20:00