First Partizan of the Year

Well, Phil & I made it to Partizan with a couple of hiccups. It was just the two of us, and we had a lot of table space to cover. It was also the first trial of loading the stand with the new Edgcote game into the boot of my car.

Well, it pretty much all goes in, except for my 1460 Game board, which went on the back seat. In fact, I could probably have put that in the back without obscuring the view too much, and I have a dog grill that would stop it all from catapulting into the car should I brake heavily. So result.

We were a little late on the off, as Phil had been working round the clock on the model and the change in the weather the day before had affected the drying time for the hills he had just made. They were laid out on the drive in the early morning sunshine when I pulled up in a desperate, but successful, attempt to get them dry enough to use. More of that later.

All of this meant we got there as the doors were being opened up to the public, so we were setting up as people were coming in. It was a bit of a slog too, as unlike previous years there was no one from our local wargaming group on hand to help out. We really need to get a foldable sack barrow or equivalent to help us with the lift & shift.

What this slightly tardy late arrival also meant was that someone also seemed to have lifted our free coffee vouchers and figures from our location, so we set up in a rush and devoid of caffeine (said the man who only drinks tea). 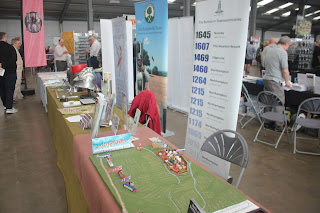 We had a long run of tables to cover, which had been set up so that the people running the stand couldn't get behind them easily. Dave L, who was next to us commented that he had already moved his tables several times. So I was even less enamoured of the "History Zone" than I usually am, as having just carried in a load of kit I then had to move all the tables around too. We had two locations to set up - the show stand above, and then the game board, which you can see below. I had the show stand and Phil had the game board.

Any how, we did finally get everything in place, and were able to start meeting our public. 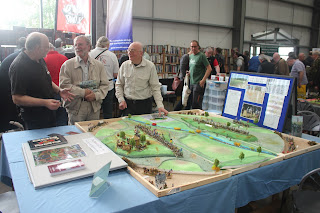 Phil has made a lot of progress on the game board and set up, but still has things to do before the conference in July. We now have explanatory boards, and hills that aren't my foam rubber. And the river is now incised into the polystyrene base. There are also a few trees dotted about. There's work to be done on the corners and the edge of the polystyrene base. The edge is going to be the wheel of fortune in the final version, I think. 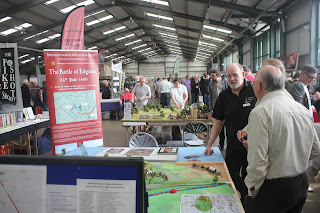 The game board and figures attracted a goodly amount of attention. We have some challenges with lining the board up to orientate it with the map on the banner, especially in this set up, where we're sort of in a main thoroughfare (you'll see in the picture of our stand above we have the banners there behind us, to stop people tripping over them). 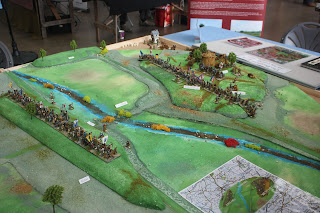 Phil has done some work on placing the model in the context of the modern maps of the area. 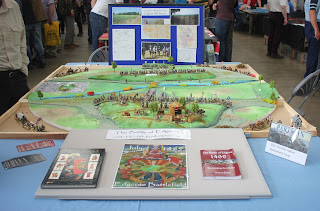 We also have an explanatory board behind the game, and a promotional board in front. 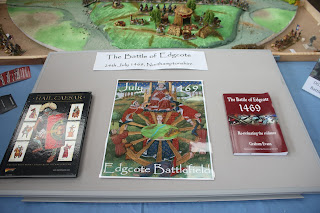 The promotional board gives us space to display the book as well.

We had a busy day. I didn't really get away from the stand to spend any time on the model, and I was only able to do one quick circuit of the hall (although I did manage to pick up some boxes of figures to make up some Jacobite period cavalry and artillery, once they've had some surgery, which is a result). All of which accounts for why there are no photographs of any other stands or games in this report.

We had a reasonable number of takers for the Edgcote book, and quite a few expressed some interest in the conference, which hopefully we'll see convert into sales over the next few days.

And as it was all winding down Phil discovered he'd won the raffle and had to rush off to spend his £75 worth of vouchers.

And then it was time to take it all down and repack. Strangely enough it wouldn't all fit in exactly as it had done on the way there, despite us clearly having lightened the load by selling some books.

On the way back Phil & I discussed whether we should start to take the NBS stand further south. Historically we've been linked to the SOA pitches that Phil arranged as Shows Coordinator North or whatever his role was, so we've never done Colours or SELWG, for example. As the SOA isn't doing these shows so much now, perhaps there's an opening for us, as going to Reading makes as much sense as going to Newark. Something to ponder for another day. Like Chillcon in Derby this year. Hmm.