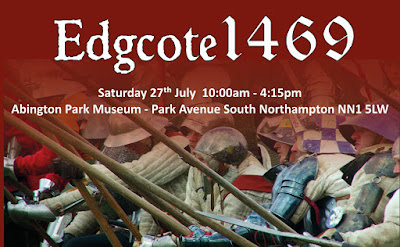 In addition to publishing a book on Edgcote, which I discussed here, the Northamptonshire Battlefields Society  is also organising a full day conference on the subject, in association with the Battlefields Trust.

The Conference is taking place on the Saturday closest to the anniversary of the battle itself, so that's the 27th July 2019.

It is being held in the rather magnificent Abington Park Museum, in Northampton. The APM was once a 15th century manor house, updated in the 17th & 18th centuries and constructed in Northamptonshire ironstone. It houses Northamptonshire's military museum, so it's a perfect venue for a Wars of the Roses Conference.

This Conference is a first for the Society, so we're hoping it will be a success as we'd like to follow up with further events to enable us to explore Northamptonshire's military history further. We've also assembled what we think will be an interesting array of speakers and topics on what is a not particularly well known battle despite its importance to the final outcome of the Wars of the Roses. The Speakers will include:

​Mike Ingram: “The Woodvilles and the War”
Mike is Chair of the Northamptonshire Battlefields Society, author of books on the Battles of Northampton and Bosworth, frequent speaker on Northamptonshire’s history and regular contributor to local radio on our local history (he's done a bit of telly too) . He will cover the background to the Earl of Warwick’s rebellion and the tensions between him, as the most powerful noble in the realm, and Edward IV’s wife and family, that are commonly believed to have led to uprising.

Graham Evans: “The Source of the Problem”
This is me when I'm not being Trebian the wargamer. I will look at the evidence we have, and how it fits together, before challenging a number of long held views about what actually happened, to whom and where. This will draw upon my recent book, but there'll be some other interesting bits and pieces as well.

Professor Ann Parry Owen & Dr Jenny Day: “Words, weapons & warfare – the Welsh Bards and the Battle of Banbury”
Ann and Jenny will be joining us from the University of Wales Centre for Advanced Welsh & Celtic Studies to discuss the often overlooked evidence for the battle contained in 15th century Welsh Poetry. This source is often not covered in depth by English studies of the battle, despite one of the armies being predominantly Welsh. Ann has completed entirely new translations of poems related to the battle not previously fully available in English especially for the anniversary. Jenny’s PhD thesis and subsequent publications have looked at weapons and warfare as perceived by the Welsh poets. This will be a unique opportunity to hear them speak at a battlefields event.

Phil Steele: “Edgcote and the Art of War”
Phil is a Trustee of the Battlefields Trust and long term member of the Northamptonshire Battlefields Society. He is a regular speaker on matters relating to battles in Northamptonshire. In this talk he will look at how the armies deployed and fought, going beyond the contemporary sources conventionally used, looking at what the chronicles and depictions in 15th century art and artefacts truly tell us about what was happening on the battlefield.

I think it's a really good programme, and I'm really looking forwards to what the other speakers have to say. If you have any interest in medieval history and warfare I think there'll be information here you won't easily find anywhere else (I've seen and heard an earlier version of Phil's talk, and it is really good, breaking new ground on our understanding of what is actually going on).

In addition to the speaker programme, conference delegates will be able to visit the Society information stand and see the brand new battlefield model, specially built for this year’s anniversary by Phil Steele. We will also be joined by re-enactors from Harrington’s Company who are also members of the Society.

Tickets:
Tickets are available exclusively from Abington Park Museum’s Eventbrite site through the links below (yes, - alas we can't sell tickets on our show stand due to the arrangements we have to have with the venue). Tickets are £30 for Society and Battlefield Trust members, or £35 for non-members, which is in-line with normal Battlefield Trust full day events. Ticket price includes parking, tea & coffee during the day and a full buffet lunch.

Tickets have been selling steadily (we have enough attendees to ensure the event is viable), and we have a big article and notification going out in the next Battlefield Trust magazine, so hopefully we'll sell all the tickets. If you have half a mind to attend, then I shouldn't dilly-dally and get one now before they're gone.

And you can even meet me and get your copy of the book signed.

Email ThisBlogThis!Share to TwitterShare to FacebookShare to Pinterest
Labels: Edgcote