As foreshadowed in my Partizan blog for this year I have been working on some plastic Jacobite cavalry, based upon Strelets' Peter the Great Dragoons.

The challenge has been to find some suitable tricorn wearing cavalry that I can use. And not just tricorn wearing. I also needed men wearing that curious fur cap with red-bag top used by Bagot's Hussars, and I didn't want to do too much conversion work. Anyway, enough of the latter for the moment. Let's look at the upper end of the Jacobite cavalry, from a social standing point of view.

Luckily I'm not too fussy about the cut of the uniforms. It's all about the head gear, in my mind. 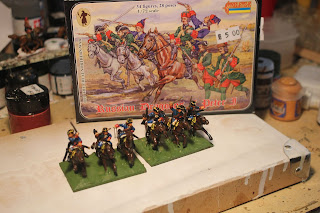 Here are the figures I've chosen to be my Prince's Lifeguard, and the Strelet's packet they are from. The figures are an odd mix of poses, head gear and equipment. Some of the detail isn't as well defined as you might like. The faces are a bit curious, and it isn't always possible to see what is intended with some of the straps and equipment. 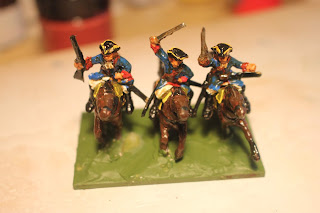 As the figures are dragoons, and as Peter the Great's dragoons really were mounted infantry, the carbine is prominent om all of them, with one of the figures I had to use holding his. I wondered about carving them off, but the illustration I have in "Like Hungry Wolves" by Stuart Reid shows someone with one, so I decided to stick with it. 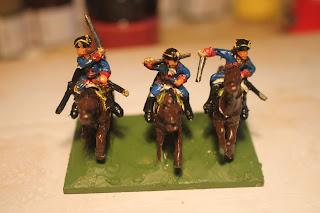 Some poses are odd, - why that man has his sword behind his head I can't say. 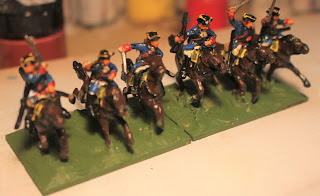 The figures weren't all a great fit to the horses. Some of the mounts came without a blanket roll at the back of the saddle as they're supposed to carry two riders. I didn't bother with that. The Jacobites weren't that short of horses. However, the lack of blanket roll did make it easier to mount the figures.

All together they look okay. They're a bit bigger than the Airfix Cuirassiers I'm using for the Loyalists, but I'll just have to live with that.

Actually, on reflection, they're better than "okay". I think they're quite striking, and overall I'm really pleased to have them on board.

Final note: Mrs T & I went to Baddesley Clinton today, which is a National Trust property. As I went along a corridor my eye was caught by this painting: 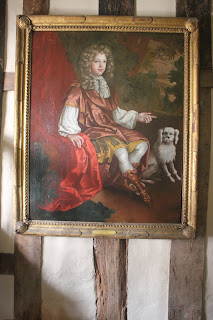 It's the Old Pretender (the family were mostly Catholics, so probably were of a Jacobite persuasion). I can't claim I stopped and looked at it as I recognised him.

I stopped because that's a really bad painting of a dog.