As trailed in the previous blog I've also done some figures as Bagot's Hussars. These were mainly used for reconnaissance work by the Jacobites, and had a very good reputation for it too.

Working from the illustration in "Like Hungry Wolves" they seem to have that curious low fur cap with a red bag folded on top. They are depicted as wearing a tartan overcoat in a terracotta red. I don't know if this was a uniform, or if men served in their own clothes. I've chosen to regard it as uniform to make the unit easier to paint.

The box of Strelets Russian Dragoons I'm using has some mounted grenadiers in tall mitre caps, so I thought I could cut them down and use some others that appear to be mounted pirates. Here's the picture from Plastic Soldier Review:

What that man is doing with his sword in his mouth I can't say. Anyway, that was quickly removed, and he now looks like he's been punched in the mouth and grown a big moustache to cover it up.The other poses are mostly okay. The man second left has a socket hand to put a sword in, which looks a bit odd, but he fits in just fine.

The headgear for the two on the left looked okay "as is". The other three I just pared down with a modelling knife. I was going to smooth it all out with a soldering iron, but in the end they looked okay.

Although they are "lighter" cavalry than others in the campaign I've stuck with having three on a base as I have the figures and they look quite nice. Having finished basing them up I'm annoyed to note that the chap with the carbine on his lap has ended up being a little bit off kilter once the glue dried, and I didn't notice whilst painting. 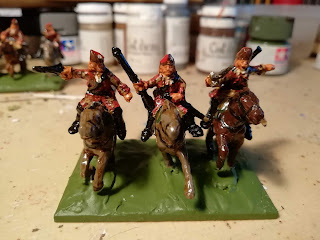 These three look okay. The guy on the right has the sword you have to glue in yourself. 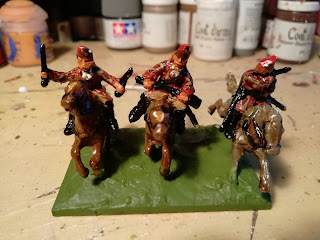 The chap on the left here is the fellow who had the sword in his mouth, and the guy in the middle is the bloke who didn't glue right. That's mostly my fault but also partly because the figures don't sit on their horses well. 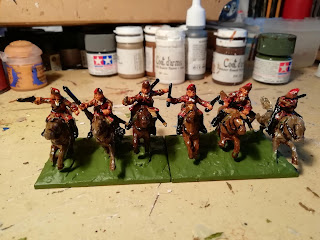 All together, however, they do look a fairly fearsome bunch of rebels. They'll do.