We're less than a week from COW. Phil is taking the Edgcote game and I'm helping him run it. With only a few days to go we had the whole lot out in Shedquarters to see how it goes and what needs to be done with Hail Caesar. 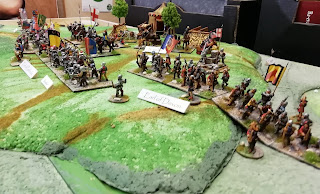 Phil set up this run through with both Herbert & Stafford on Edgcote Lodge Hill (this might be called "The De Wavrin Scenario"). We had two players for them (Patrick and Richard) so he gave a briefing that gave them the opportunity to fall out, which they avoided doing. It's always a bit tough in any refight to give players real choices whilst also trying to do something that looks like what happened or is a believable outcome. Phil said he was going for about 75% historical. 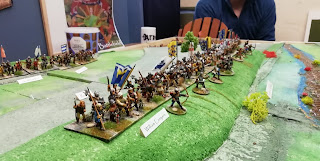 We were deployed on the "East Hill". Yes, I got to be Robin of Redesdale. Steve got Gates & Parr as first wave reinforcements.We were given, as were Herbert & Stafford, some deployment choices. Alas how I wanted to play it, - conceal my main force behind the hill whilst harassing with skirmishing archers - wasn't really possible with the game mechanism as we were using it. 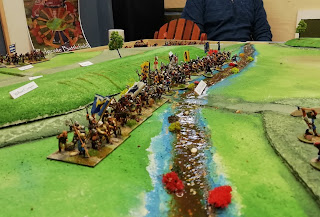 In then end as Brave Rebel Robin I pushed up to the stream and started to shoot at Devon's men on the hill. 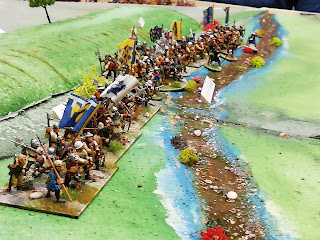 We came forwards waving our banners. 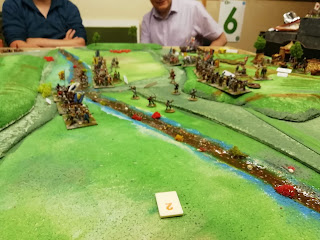 The advance ended up being a bit staggered, as is the way with HC. Herbert went and found his horses and mounted up. And then didn't move for the rest of the game. My reinforcements in Gates & Parr likewise had an intermittent advance to the conflict area. 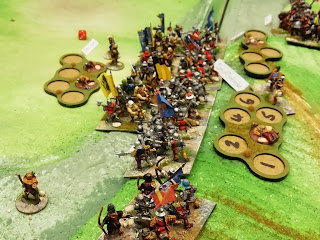 The melees when they started were a bit too and fro. We're still working on our understanding of HC and looking at where modifications are required. Eventually bits of both armies started to turn and run. Then Gates & Parr arrived to shore up my line, and the brave rabble of Northampton under John Clapham arrived and threw themselves on the static William Herbert. He managed to fight them off, but was killed in the process. The Royalist army was then broken, so hard fought win to the Rebels.

There's enough going on here to keep everyone amused for an hour or two, and all the players enjoyed themselves. Whenever we do this (well, whenever Phil runs it, - it's his game; I'm just there to help out) there will always be discussion as we go on. It is quite fun to read out parts of the sources, especially the relevant lines from the Welsh poems, at the appropriate times so I will keep a copy of the book handy when we do this on Saturday.

I was reflecting as I was writing this up that this is similar to the process of adapting a book into a film. Not everything in the book will work on the big screen, and the writer may not have covered everything you need to know to make the visual experience work. There's inevitably compromise and it is probably best that someone other than me is designing the game at this point.

Which is lucky, really.
Posted by Trebian at 11:53