After an enjoyable time last year I went back for another go at the SOA's annual residential bash. The organiser, who I wargame with every quarter, encouraged me to put something on, and also consented to me doing my Edgcote talk as well. The game I took was "To Ur is Human", and the reason I published the rules was because I was taking the game. My hopes of selling large numbers of copies to an enthusiastic audience were high.

I drove up Saturday morning again. The hotel room for the Friday night is a bit rich for my wallet, and there was no guarantee of games, unlike COW. This has been recognised by the organising group, so will be different next year, of which more anon.

The hotel was stuffed to the gills, so I had to park in the entrance to unload, before putting my vehicle in the over spill car park. Lucky for me I was done just before the heavens opened.

The first session was Phil S and Mike Ingram talking about Bosworth, which is the battle day for 2020. This clashed with the RWC Final. Glad I took in the talks, rather than slipping off to the bar. I won't say much on the talks here, other than to remark they were excellent and sparked a healthy debate. Mike was chuffed as he sold out of all of his Bosworth books he'd taken with him.

Then it was time for some games. 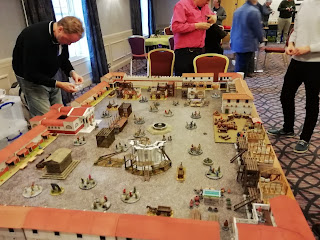 I went for David & Sam's presentation of "Gangs of Rome". As you can see they have invested a lot of time and effort on their set up for playing this, unless the buildings are all sold ready painted (which they might be) in which case they've invested a lot of cash in the game.

I was interested in giving this a go as there's been some buzz about it, and it isn't the sort of game that I would normally play. 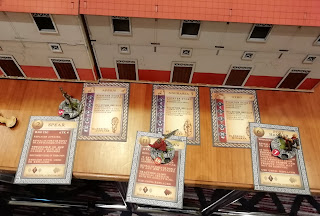 You have cards for your characters/gang and also cards for equipment, which are represented on the table by MDF denarii. We were instructed to select 75 points of fighters and weapons, but I don't think anyone did this properly. This was the biggest game of GoR that David & Sam had run, and they were unsure of the number of players so there was a bit of confusion. I think it would have been better to have given us pre-selected Gangs, and just got on with the stabbing. 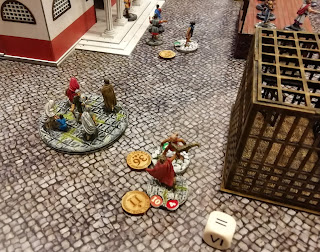 It didn't take long for gang members to start setting on one another. Figure movement sequence was random, with Harry Sidebottom drawing coloured meeples from a cup. The coloured chits on the base are the character number and the number of hit points left. Combat is like the PBI armour rules, with hitting and blocking numbers of dice. Nothing original, but it works.The dice used in the game have Roman numerals on them, which can be a bit confusing when reading IV and VI. However they are essential as the crowds of citizens (the big round multiple figure base) move randomly on a IV, V, VI in the direction of the "V" on the die. 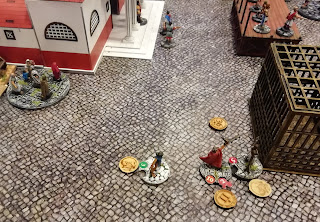 The denarii represent weapons used and dropped. The randomly moving mob is head banging itself into a corner, like a badly operated remote controlled car. 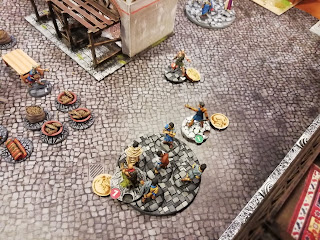 There's also this thing you can do where you can disappear into  a crowd of citizens, then pop out in another group within 18". 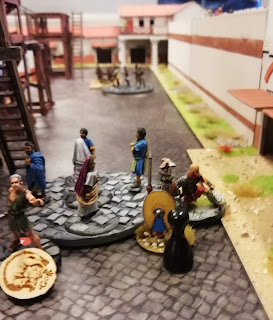 We were all hunting for Ballista, but he got away in the end. I got points for stabbing people, so came second..

The game relies heavily on the figure and scenery trappings for its appeal. Without them it is fairly ephemeral as a gaming experience. It feels a bit "faddy", which isn't to say that it isn't fun. I'm glad I took part in the game, but I won't be bothering the manufacturers any time soon. 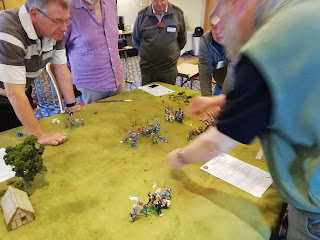 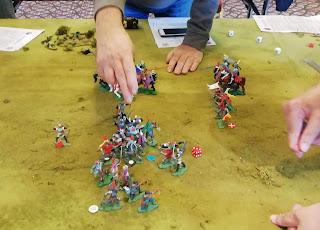 And Mark Fry was back with his Chariots and Wings of War. 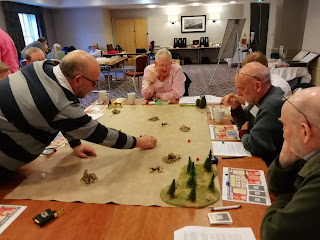 I was hoping he was closer to the published version, but progress seems to have been slow, and he's still using Wings of War cards in the game. Hopefully by next year he'll having something shiny and shrink wrapped to show us.

After lunch we had a talk by Simon Macdowell on the Vandals. This was interesting and provocative, and sparked some debate. He was also selling books, for a bargain £10 each (or 3 for £20, which was a true bargain. I avoided it. Don't need any late Roman era armies at the moment).

After the talk I was on with "To Ur is Human".

I had a full house of 6 players. The game was set up very simply. The army on the right is attacking, those on the left defending. I didn't over-egg the scenario as I wanted players to focus on the game, not the plot. 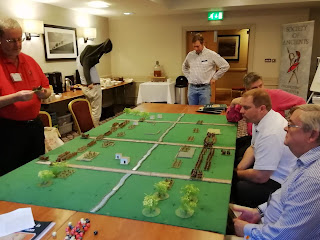 The conference organiser looks on, as one of the players strips for action. 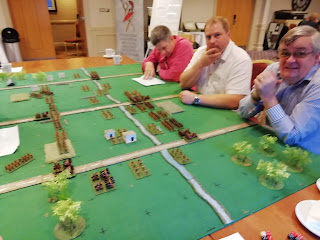 Everyone looks thoughtful. Adam consults the playsheet, looking for inspiration. 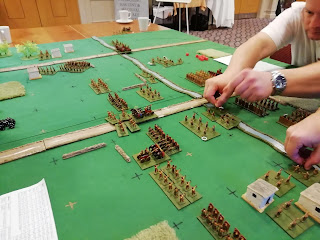 Jeremy tries to ride down massed archers with his battle carts. He takes a lot of damage on the way in, and fails a Fear Test. 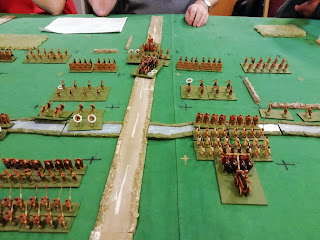 Duncan rushes his Lugal across, to bolster the archers. 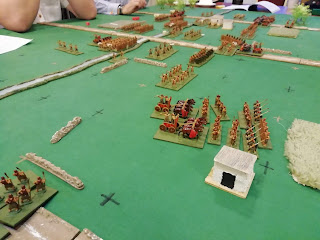 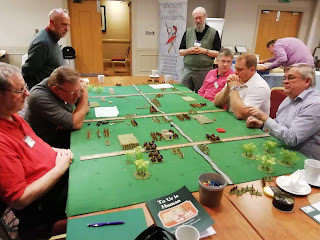 We are nearing game end, I think. With 6 players I did not take that many photos. Duncan Head played a blinder, churning out sixes almost on demand. The players helped me out considerably, as I kept getting the Fear Test outcome numbers swapped round in my head. That may explain why I only sold two copies all weekend. For those of you who are interested and missed out on the buying opportunity they are available here for a very reasonable £5. As I was asked on another post, people were interested in whether they could use the rules for any other period. The answer to that is that these rules were written for the Sumerians. I don't have an encyclopedic knowledge of the entire ancient world, so I wouldn't say for sure either way. They might be applicable, - you would have to try them and see. I think the Fear Test has wider applicability, and expect to see it popping up in other rules in the next few years.

We then had a break to change for dinner, and a chance to get a drink in the bar, which was overcrowded and overpriced. Then Harry Sidebottom gave a pre-dinner talk on the crisis in Rome during the 3rd century and then sold lots of his books.

Dinner was a vast improvement on the previous year, both in quality of food and service. 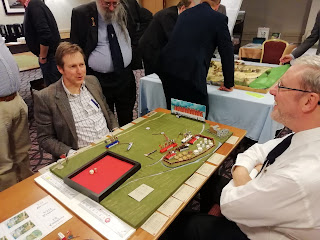 After dinner, some games. I got 1460 out again and ran it three or four times. Overwhelming Yorkist victories every time. Richard L even won it with out using Edward of March.

The next morning I was up to talk about Edgcote. I gave a version of my 550 conference talk, focusing on sources and the battle itself. I think it went well. It's a knowledgeable audience and the Q&A was lively and well informed. Matt's point that the number "60,000" might actually just mean "everybody" (it refers to the 12 tribes of Israel each at a mythic 5,000 people, perhaps) to the medieval reader and writer. With Mike, Simon & Harry all selling books people were nearly skint by the time I stepped up, but I had 5 takers. If anyone couldn't afford one at the time and wants to get one ordered for Christmas, look here, where you can also read all of the 5 star reviews. 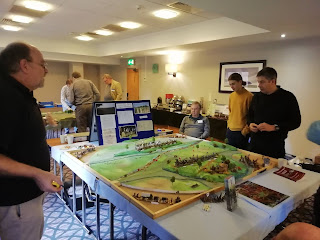 Phil then ran the Edgcote game. He doesn't really need me to help, but I was there anyway, reading out appropriate bits of Welsh poetry and other sources. 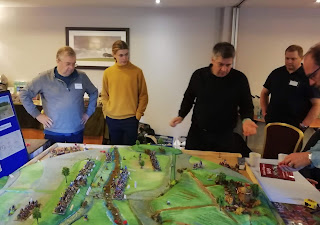 Hail Caesar continues to do a good job, although I'm still mystified as to why. 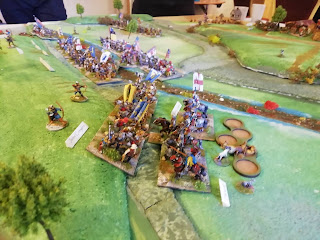 It was a complete failure for the rebels. I think Warwick may need to go into hiding. 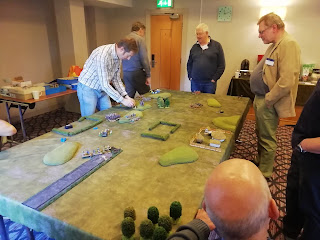 Behind us Richard L was running his Roman encounter game he trialled on a load of us last time we were down in the West Country in his magnificent games room.

We then had lunch, - again a vast improvement on last year. If I wasn't having a Sunday roast when I got home in the evening I'd have got well stuck in. Instead I had vegetarian pasta. 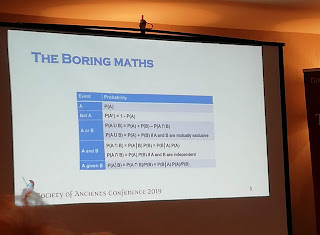 After lunch Nick Harbud did a talk on probability. It was more interesting than he makes out on this slide.

There were then more games, but I had a lot of tidying up to do, so I set to work on that. Our NBS stand was up and our crates of stuff were all mixed up following a long show season. I therefore took the time, as all of mine and Phil's stuff was together in one place, to repack it all properly and throw out out-of-date promotional material. Then time to head off home in the gathering gloom.

Another worthwhile weekend wargaming, although I would have liked to have sampled a few more games. I'm good with a lecture first thing each morning and an evening pre-dinner speaker but I'd happily go straight into games after lunch, although that does require people to offer them as sessions.

For next year the event will move to Madingley Hall, near Cambridge, which is a conference centre and looks much more suitable for the needs of an event such as this. There are more meeting rooms for games, so we aren't all crammed in together, and the bar is much bigger too. The Conference will also take up at least half of the accommodation rooms and so we will avoid being squeezed to the side by the evening events at a big hotel, as we have been at Chesford Grange both this year and the last. The pricing looks keener too and pretty much guarantees a Friday evening to Sunday afternoon event for me. The drive is a little longer in my case, but otherwise I can't complain.