This weekend is another Virtual Conference of Wargamers ("VCOW") run by Wargame Developments. I shall be running an on-line game using "Taiping Era". To ensure things get going smoothly I wrote up a scenario and drew maps and stuff like that for the players. However, I thought it might be a good idea to try it out first, so I got the Monday Night Group to step up and give it a run through. 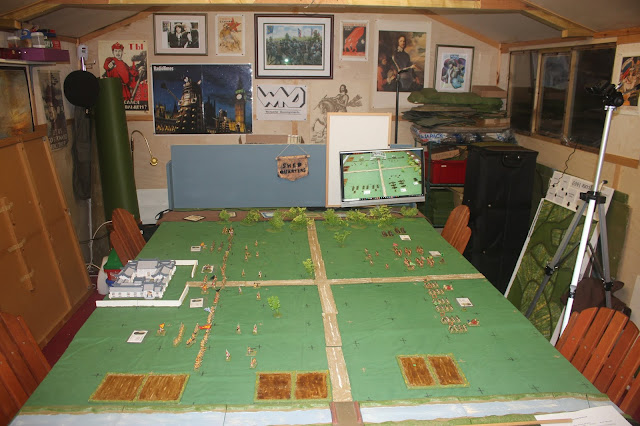 On the right we have the Ever Victorious Army near the camera (commanded by Jon) and a brigade from the Hunan Army, with some Mongol cavalry (in the tender care of Ian).
The left left, a Taiping Chun of three shih, commanded from top to bottom by Richard, Phil and Will. The EVA/Hunan forces were marching to liberate the local town, but have bene confronted, unexpectedly, by a large force of Taipings. What could possibly go wrong? Other than me sending out the briefing attached to the calendar invite which no one could open. 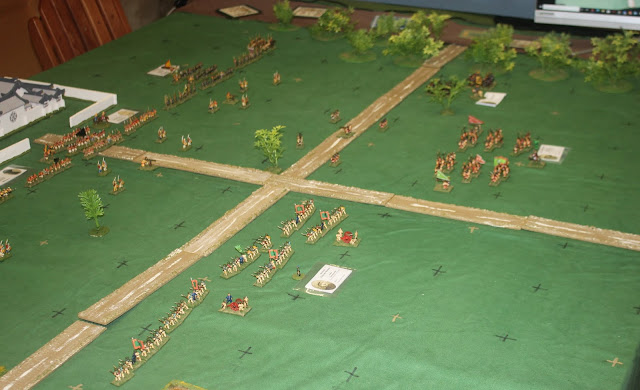 The Eva/Hunan Army got the initiative, and Jon immediately advanced across the table and deployed into line. Ian moved up more tentatively with his infantry, and, surprisingly, with his Mongol cavalry too. 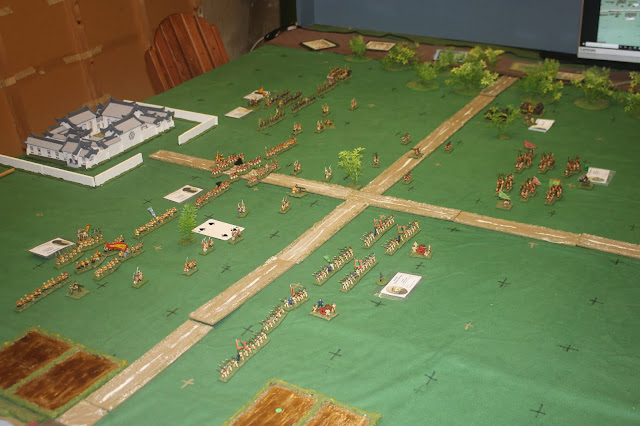 Phil was in overall command of the Taipings, and ordered Richard to refuse the left flank (for fear of the Mongols) whilst pressing forwards in the centre and the right. The EVA opened fire, and Will's skirmishers took some damage. Instead of Mah Jong tiles for this game I used playing cards so that the players could see them more easily on the camera. 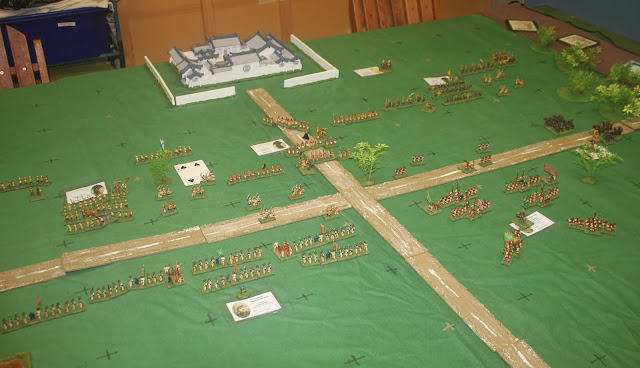 Next turn, and the Taipings pressed forwards fairly aggressively with their skirmishers, and Will moved his line up. Jon halted and deployed his artillery. Ian cautiously moved his Mongols forwards, whilst Richard covered his more exposed left flank with his skirmishers. Phil sent his general across to help out. You can see that both Phil & Ian have wheeled some of their support troops in order to widen their lines and fill in some gaps. 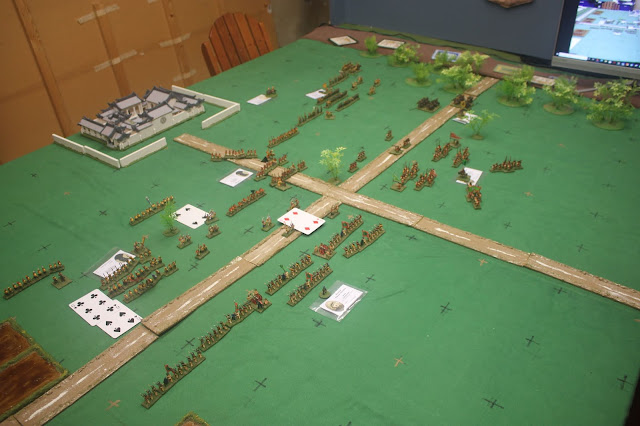 The EVA opened fire all along the line, (should have put out some smoke) and inflicted hits on Will's brave fellows. 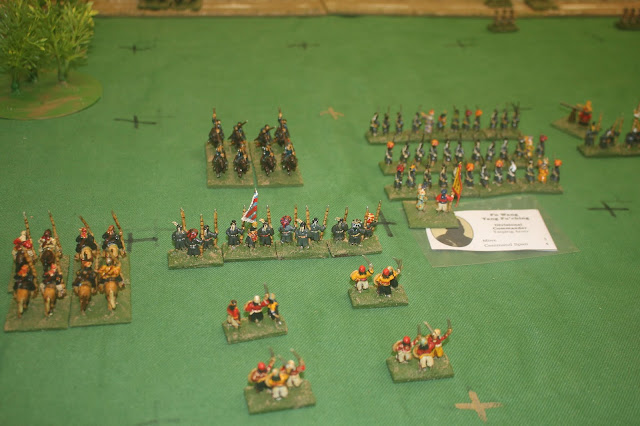 Ian closed in on Richard's spearmen, but chose to hold one of his units back. I'm not sure he had a clear idea of what he wanted to achieve. Richard did, but was unable to get his troops in the right places. 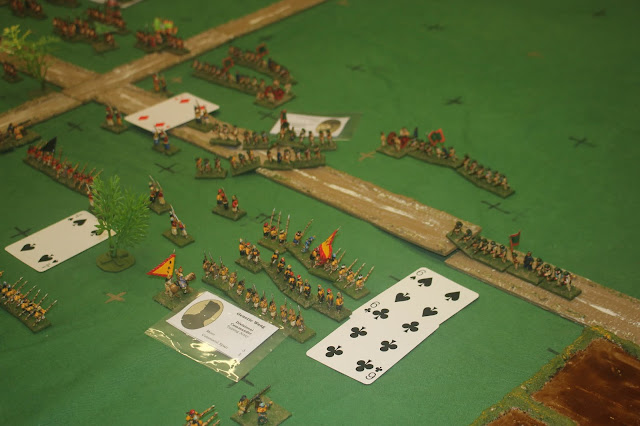 Jon closes in, pressing Will hard. The EVA are a nice little army to play with. Compact and powerful, they do what you want them to do. 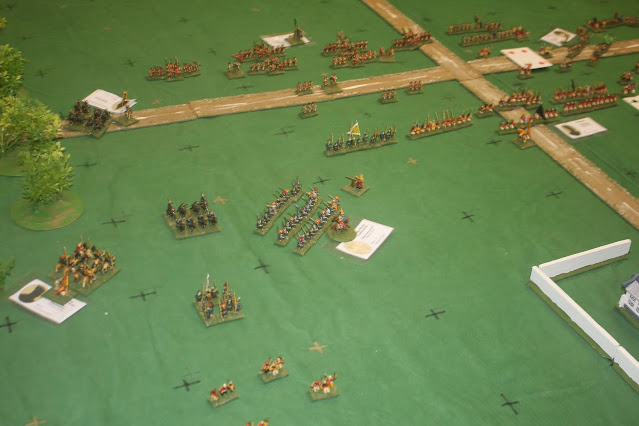 On the other flank, Richard forms his spears into a square, and swings his cavalry and massed muskets round to threaten the Mongol flanks. This is a bit more Chinese! The formation of the unfolding lotus. Or similar. Ian is now obsessing about sending his Mongols into the woods. 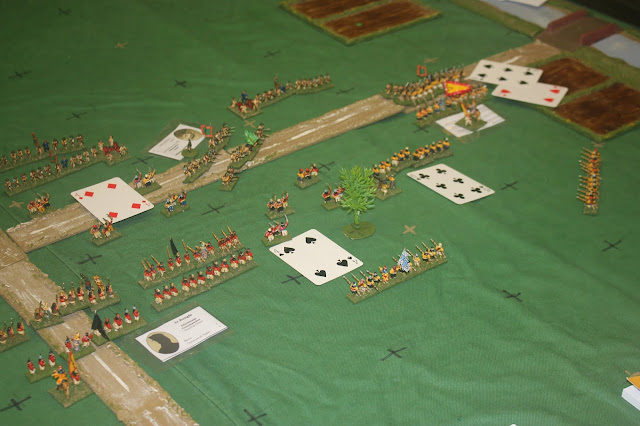 Out by the paddy fields, Will charges home. Jon looses off a volley and counter charges. 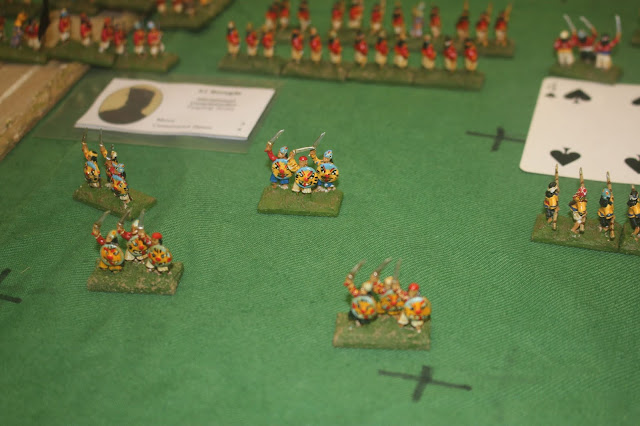 In the centre, after a devastating musket volley from the EVA, Phil's skirmishers turn tail and flee. 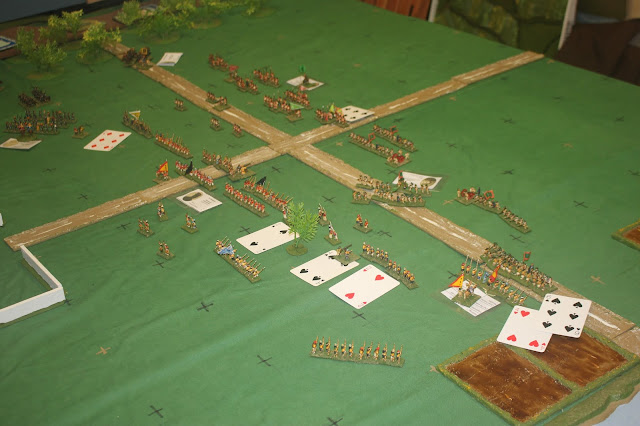 Further fire is making Will's end of the line waver quite badly. 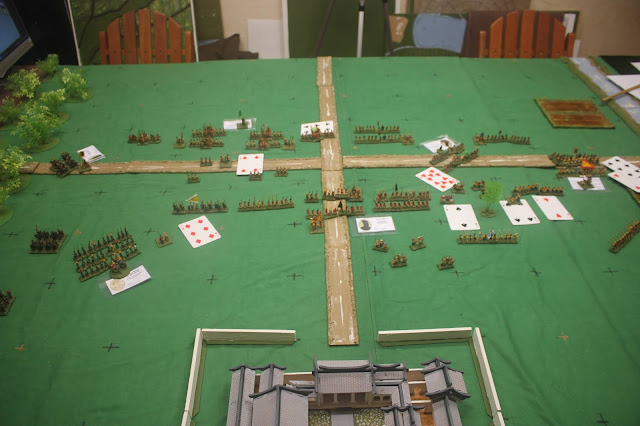 This general over view shows that things are hotting up everywhere. I really wish I'd put the smoke out. 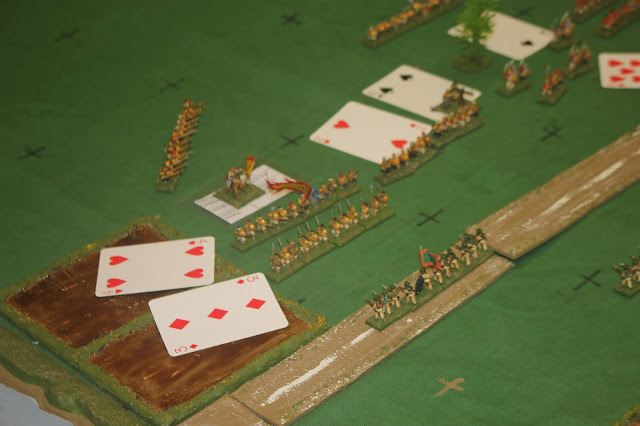 A hard fought melee round sees both EVA and Taiping back on their starting marks. 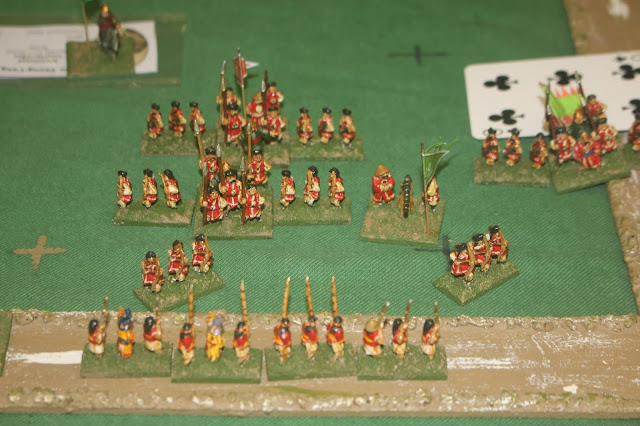 In the centre, Phil charges Ian's skirmishers to disperse them. 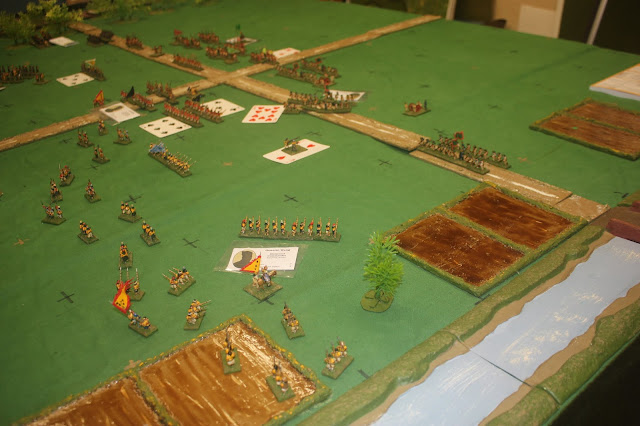 At Will's end of the line, massed musketry has done the trick, and lots of his men are looking to go and warn the others about the arrival of the foreign devils. 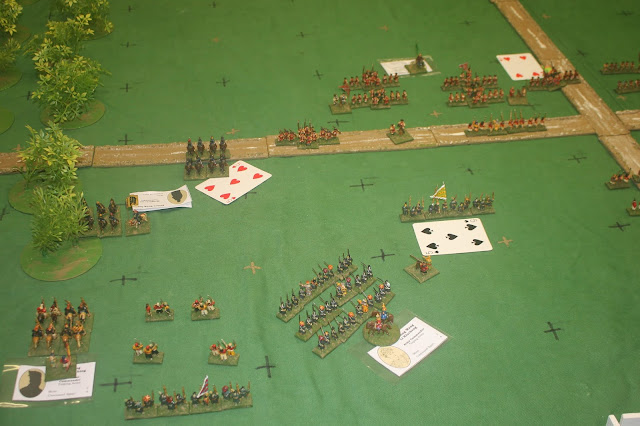 On the other wing, Ian decided to withdraw his leading Mongol unit, taking some damage from Richard's muskets for his pains. His other intrepid horse men are skulking in the woods. 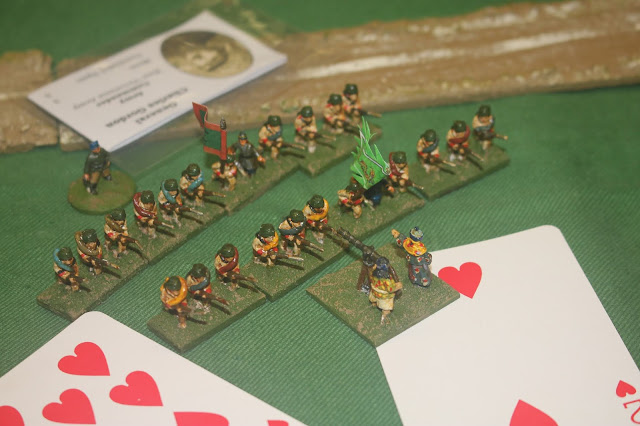 Despite his success at shooting up infantry, one pesky jingal wouldn't get out of the way. Jon was forced to charge it to clear the space. 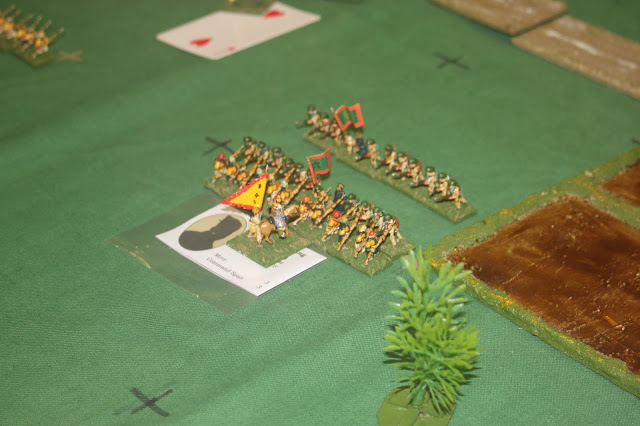 More of Will's brave spearmen hurl themselves into Gordon's mercenaries. 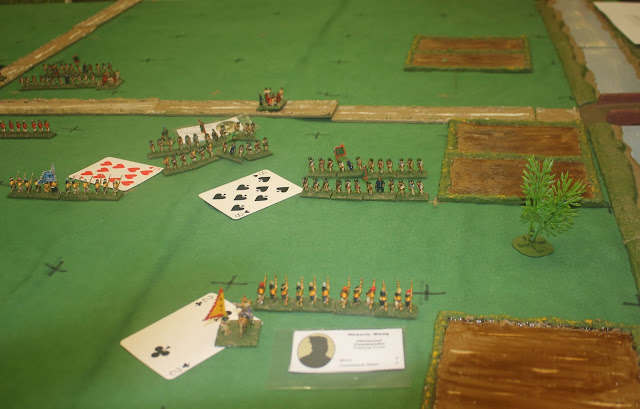 They are thrown back in some disarray, but it was very brave and noble.

In conclusion, the EVA has turned the Taiping right flank, and in a few moves will wheel in and roll up the line. On the other end of the line, Richard may succeed in doing the Hunan Army some serious mischief, if Phil can hold the centre.

On the whole it went okay. As everyone, except Phil, was new to the system there were a lot of questions. My failure to send out the briefings didn't help with getting us started on time, as does the fact that most people don't seem to have as many fancy dice as me.

Lessons learned for the weekend? The playing cards work for level of damage per unit, taking into account the needs of the video feed. I need to get out the smoke, and also some of my "Moving" markers to keep track of who has done what, which is more difficult without people in the room. I think there may need to be something to slow down Gordon as well, as the force numbers are about even, and the EVA is like a laser cutter in a cheese factory.

Otherwise, thumbs up, I think.