My latest development project has been the late 17th/early to mid 18th century as I endeavoured to revise and remerge "Va t'en Gueere" and "Va t'en Ecosse" to produce "From Pike to Bayonet". The development process hasn't been exactly fraught, but it has been a challenge. I have struggled to articulate my ideas both in rules format and also to my players. My normal technique of simply writing my way through it* has failed dismally to break the logjam. For now it looks like the best idea is to put it in a "drawer", so to speak, and let the ideas ferment in the back of the brain for a while and see what pops up. I'm sorry if this is a disappointment to any readers, but "P2B" isn't going to make it into print in 2021. 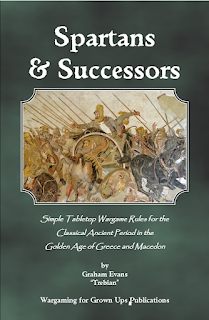 On the other hand, my simple but fiendishly clever ancient rules, designed to be played in a small area with small numbers of figures, (blogged about recently just here), now rejoicing in the name of "Spartans and Successors" are making progress quite nicely and are perhaps only a month off completion. The rules will come with a dozen scenarios from the Golden Age of Hellenic warfare, and should be readily affordable.

So will "P2B" follow them, I hear you ask? Well, probably not, unless I have a real flash of inspiration. Actually, several sustained flashes of inspiration over quite a few weeks, if not months.

So what to do instead? Well, that last RCW game using OHW made me think. The unit sizes I use for FWTDR fit with my collection of RCW toys, and there are some post war similarities in how armies fight. There are some aspects in the core command system that might well fit with the difficulties sometimes encountered with recalcitrant conscripts on both sides out on the Steppes. Just need to work out exactly how that sort of thing functions. And double check my books for the orbats. And add attack columns and some more detailed cavalry charge rules. Plus there's armoured trains to think about. So a whole heap of stuff, but basically its all fine tuning the chrome.

So I've scheduled a game for a week Tuesday with the Monday Night Group. If that goes well, then I think "It Tolls for Ivan" will be on its way as a supplement for "For Whom The Dice rolls".

How does that sound?

*This is a technique where I open a blank Word document, head it up with the relevant rules section -  eg "Firing" - and then just write my ideas down in a coherent fashion, with proper paragraphs and headings. This makes me go back over and over again as I try to make the section complete.