Yes. We went to Partizan on Sunday. Phil & I were joined by Chris K, and we all managed to fit in the car, together with the Northampton model, 6mm Edgcote and the 1460 game which we didn't have room for when we got there*. This was Chris' first trip out with us to a show, for a variety of reasons. He used to own a shop, so he worked most weekends, and often he'd give Phil a list of things he'd like to have - normally the odd sort of stuff you need for WW2 Operational Wargames - so it was nice for him to be able to hunt them out for himself.

It's been a while. The last show we did was Alumwell in March 2019, so over 18 months ago, and we were unsure of what to expect. We were able to get out our big standard banner for the first time at a show, to mark our territory. 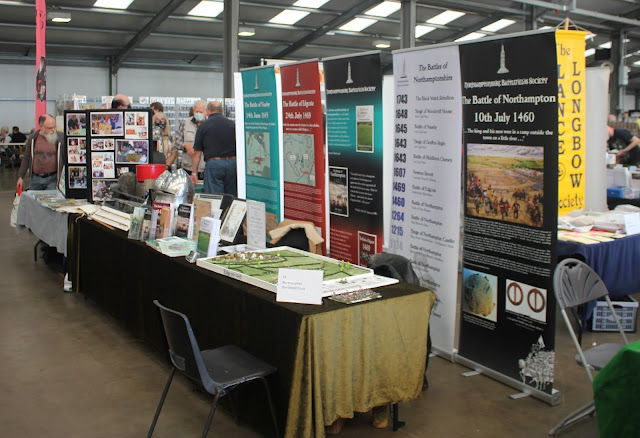 And also our new set of 5 banners. 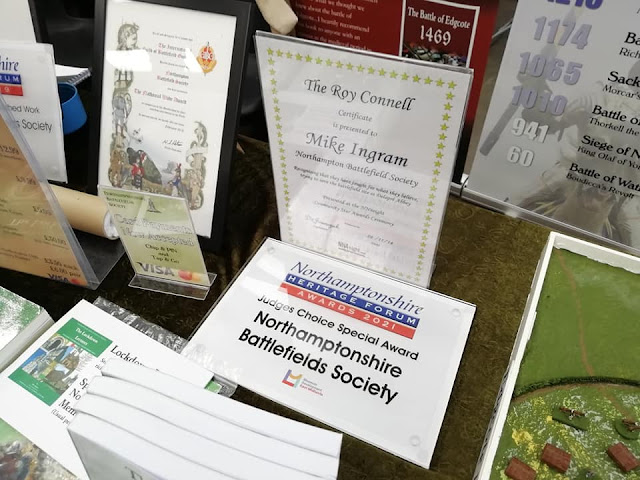 First trip out for our latest award, too. Our "boasting table" is getting a bit full these days. That's a first outing for our Guild of Battlefield Guides certificate top left (we had to give the silver plated statuette back).
On a side note, I'm pleased to say that the 4G in the building is much improved, so we had the "We take VISA" sign out too. And took some card payments, so it was worth it. 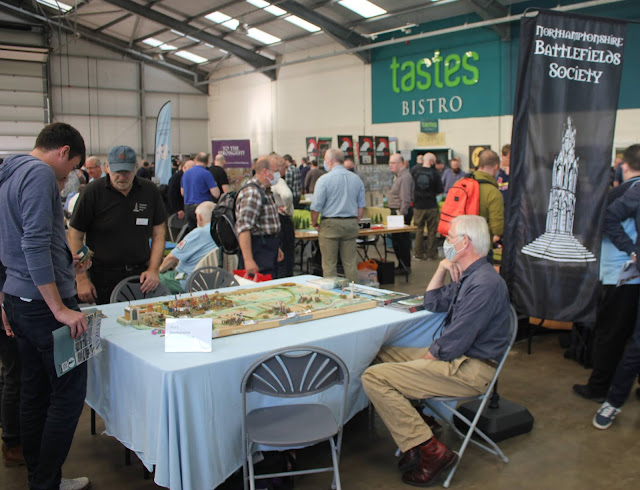 A goodly number of people stopped to say hello, and we usually had someone round the big model 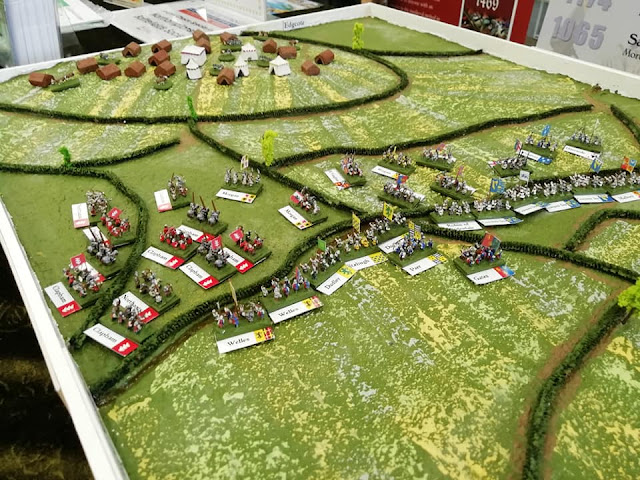 The little model got some good feedback too, and some praise from Pete Berry of Baccus, who complemented my paint work. High praise from the designer of the little guys. Pete also grabbed a copy of "Spartans and Successors", as did a number of other people, who sidled up to me and asked for a peak at my below-the-counter stash.
It was good to catch up with some purchasers of the rules, who unanimously had kind things to say.
We were busy all day, and in addition to me, the Battlefields Society sold a few books, which was gratifying too. Oddly enough, our latest "Battles and Battlefields of Northamptonshire" did not garner any sales, so I need to think about how I tell people about that book, as it has some good stuff in it about the ECW in Northamptonshire, which should be of interest to wargamers..
With three of us there, plus some friends who dropped by, we were all able to get away to stretch our legs and see what was on offer. The display games were their normal lovely selves, all with impactful scenery. Looked like everyone had put on their best bib and tucker for the occasion. I didn't take any pictures, and I'm not really sure I can tell you why.
The trade stands had most of the normal suspects. We were missing the guy at the far end who stocks 1/72 plastic figures, where I normally part with my cash, and one of the major book sellers at least, I think.  It looked for a while like I was going to go home with my wallet intact. And then, Phil turns up and says:
"The guy at Syborg [who? what?] has a box of remaindered Zis trucks he's selling off for £2 each". Turns out Syborg are  purveyors of 3d printed models. I have by and large let the 3d printed revolution pass me by. Chris K is a regular user of them, and has been moderately enthusiastic.
On the basis that you can never have too many trucks, I took myself down there and availed myself of the opportunity to pick up 10 of them. I'd earlier been routing through a box of Zvezda models on Dave Ryan's stand, prepared to pay £3.50 for whatever I could get, so this looked like a good deal.
And then my eye caught the box next to them of recently introduced models. Was that a Schneider CA1? That tank the Spaniards have about 3 of, and none of them worked properly? Surely it was. One of those for the Republic, please. 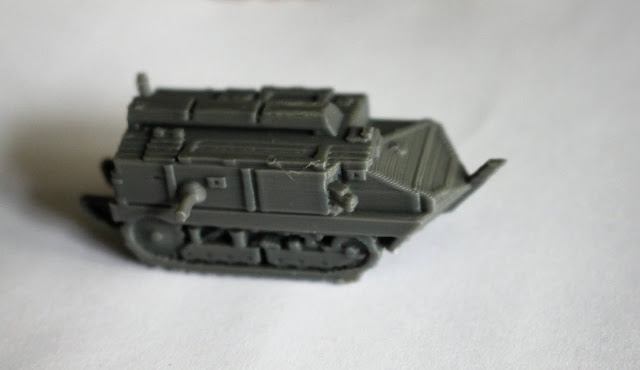 And a British Medium B, the tank too late for the Great War, the one where the prototypes were sent to Russia with the Interventionist forces, to see how it worked out? Oh yes, indeed, pop one of those in the bag too. 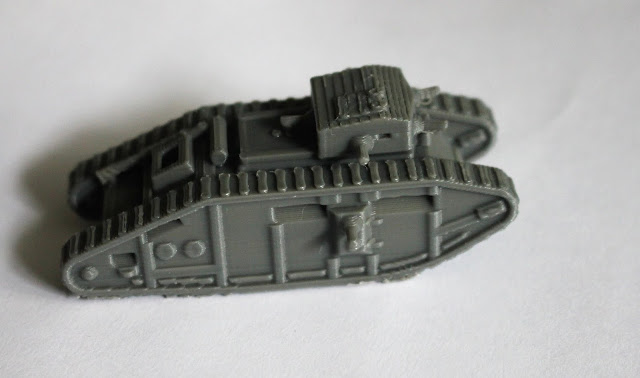 And a couple of Lanchester armoured cars? Don't mind if I do. 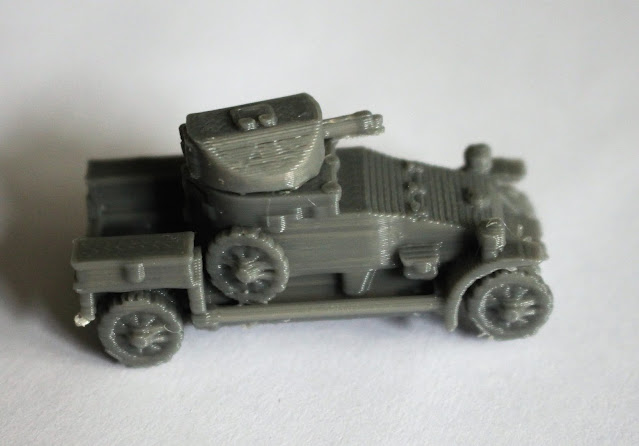 These are close up pictures of 15mm models, and they can look a little "ridgy" but that will file down or fill out if I can be bothered with it. They may be slightly smaller than the usual QRF/Peter Pig models, possibly being closer to 1/120 than 1/100, but they'll do for me bearing in mind how often they're likely to appear. I may not be a complete convert, but at £4-£5 each for the big models, and £3 for the Lanchesters, it is hard to argue with the value for money.
In conclusion a successful show. I felt that people also stayed longer at the end, and traders were later taking the stands down than is normal. Which is probably good news for them.
Yes. A very satisfactory day all round.

*The organisers had altered the shape of the History Zone slightly, to widen the walk way. We moved some stuff around, but didn't discover until tidy up that one of our tables was on the other side of the area, and remained empty all day.