The Advantages of Being a Wargamer (part 4)

How often do you have some one say "Have you played such-and-such it's on-line and you can play any character it does this and everything else you can imagine and you can chat on line and it's even better than World of warcaraft etc...."

Essentially the thrust of it is that any gaming experience is better for having an electronic interface. Well, I'm not a believer, and last Saturday sort of proved my point of view, at least to me. 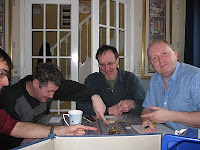 The long awaited trip down memory lane to revisit my early RPG roots with friends who were there at the start of the journey went rather well. Yes, we may all be 35 years older. We may not have all gamed together for over 25 years but it didn't matter. The sheer joy of being in the same room with fellow gaming friends creating the game as we played it is difficult to explain if you haven't been there.

The thing is you can draw up a dungeon and populate it with all sorts of clever things but you have no idea as a GM where the game may go. Traps you thought would baffle players are negated by some simple lateral thinking. On the other hand you would not believe how much confusion can be created by a simple stretch of corridor with absolutely no special features. We spent an hour nearly on the simple task of finding the dungeon entrance then roping down into the entrance hall (I had the entrance as a trap door leading down into a cavern to stop players simply running in and out). It sounds daft, but it was hilarious and challenging at the same time. 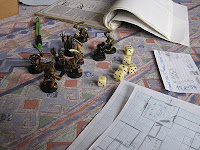 I was going for a real retro feel for the game, so I did it all with pencil and paper, - no computer work at all. I was also not going to bother with figures as our early games were figureless. In the end I relented as you probably do need markers to show you where people are standing when it all starts to go pear shaped for the players (although no one actually died this time round).

The important thing with the figures is that they should be enablers, not limiters. You can get into the mind set of not doing something because you don't have the figures for it, whereas the best RPGs take place in the imagination. I shouldn't have to make a model of a massive vaulted hall lined with statues. The players' imaginations should do that for me.

Alas, as indicated in an earlier blog I'm a bit short on the figure front (no, that doesn't mean I've only got dwarves left). Luckily I still had a set of GW's "Talisman" and Waddington's "Dark World" at the back of a cupboard, so a quick freshen up with some magic dip and I had enough to get going.

I won't do a blow by blow account of the adventures, - maybe next time I'll set up a Twitter account and post updates - but some things will stick in the memory for a while.

In one room the players encountered a curtain strung across it. "Wodger the Wogue" confidently shouts out "There's a medusa behind that, - I hold up a mirror", so he got a bit of a shock when an Orc chieftain with three "associates" burst through it and attack the party. Secondly I protected a Treasure Room with a pit and put some bulky items in the room, forgetting they had to be taken out over the pit. I was therefore completely baffled (once the players had killed the guards) as to how they'd get the stuff out. In the end they just took the door of its hinges and laid it down over the pit.

You see in a computer game you can only do that if the designer has thought of it beforehand. In a human moderated game you can just go with it and change the dungeon or the rules.

So, what is great about being a wargamer is that the friends you make usually stay with you forever. You can not see them for years, then before you know it you're back to being a 15 year old.

We'll play T&T again, I think. However, only two of three times a year. We want to avoid getting into the obsessive questing type of game that compel you to play every day of the week. This is just a bit of fun.

Besides, we're all Grown Ups with proper jobs and Real lives to be getting on with.

But at least as Grown Ups we've always got somewhere to play.
Posted by Trebian at 10:51