CoW , The Final Chapter (for this year)

Oh my...up early again as I have to set up for the Return to the River Don game. There's quite a lot of figures to get out, and terrain to lay out and the room to set up generally and I don't want to miss breakfast.

It looks from my pictures that I haven't got one of the overall battlefield. I had a railway crossing a fordable ditch and some roads a few wooded areas plus some buildings. 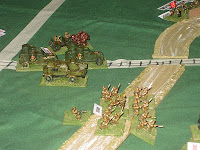 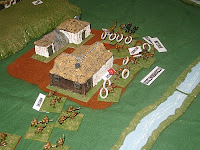 We had the whole morning session, - about 3 1/2 hours - and got a lot done although didn't reach a conclusion. Units failed to move, were coerced and come mutinied. A battalion of White volunteers close assaulted the village in the face of Red MGs and under the pistols of their Officers to meet the inevitable fate. The Red conscripts all took heart from their armoured cars and refused to run away.

The players were good enough to speak well of the system. Inevitably you get the suggestion to "speed it up" but I'm happy with each step in the game as it gives a realistic feel. To speed it up will lead to more abstraction. I'll say no more for now and do a proper detailed write up for Nugget, WD's magazine (so if you want to know more you'll need to join). The photos show my penchant for use of labels and markers. I make no apologies for this, - it makes it so much easier to track what is going on.

Final point on the game, - having packed everything so carefully I left the railway track in the garage. Some masking tape and marker pen stop in for it in fine fashion.

After lunch I slid into Richard Brook's lecture on Von Moltke the Elder. Entertaining and informative as ever, I shall pick up the book when it is published.

CoW as ever is rounded off by WDs AGM, which passed without incident.

And so home for another year.