Just had a significant birthday. So far it is going quite well. On Friday I was pleasantly surprised to find that the team at work had done a whip round for me and in consultation with the only other wargaming member of the department bought me a number of Spanish Civil War Peter Pig Black Boxes. This has resolved a shall I/shan't I issue that I've had since I read Anthony Beevor's book last year. I reckon I'll break the "armies" up and use the packets to make up higher level formations as these are intended for company level actions. However I am a bit light on SCW information although I have found a good painting guide on-line.

Saturday I held one of my occasional matrix day games. I tend to run a pair of games, - one set in the fictional African country of Zambola and one a historic refight. This year I did Magnesia. This went off quite well and we rounded off the day with a BBQ in the rain. I do these games with a different group of players to my normal group as these are matrix game "specialists" if you want who I met through WD.

Sunday Mrs Trebian and I went to Cambridge for a concert given by Canadian Rock-Gods "Barenaked Ladies", supported by the excellent Boothby Grafoe. I'd also managed to start a test paint job on some of my recently acquired Spaniards. Otherwise these are in the queue behind my Covenanters.

I've taken this week off, so after the excitement of the weekend Monday was a bit low key. Picked up a few more birthday presents (most notably from a wargaming point of view "Black Powder").

For the rest of the week Mrs T & I are on a road trip. Tuesday we drove down to Hay on Wye, pausing on the way at picturesque Alcester (where the Roman museum was shut but we did have a very good lunch sitting in a pub garden). Moving on from there we stopped in Worcester and went round the Commandery Museum. This building was Hamilton's command post during the battle and there's an audio guide that takes you through the major points. Picked up the book on the battle published by Paddy Griffith's Field Books imprint in the gift shop. 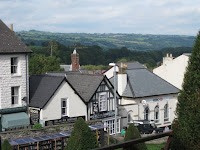 Have spent all of Wednesday in and out of Hay's bookshops. Hay is a pretty little village with about 20 new and secondhand bookshops in it. You never know what you are going to find as you poke about I was looking generally in the following areas:

What I ended up with was:

Not a bad haul, but nothing on the Sudan. plus we bought an owl made out of wire and a watering can in the shape of a snail.
Posted by Trebian at 09:48