August 21, 2012
Monday Night, as promised, saw our first play through of BAIT, RFCM's SCW company level action rules, nearly 10 years behind everyone else. Will took the Marauding Moroccans and Phil had the Anarchists. I had the rule book and the final say on what was supposed to be going on.

Just to recap I set the board up and laid out the objective markers so we could skip the introductory game to make sure we got the game finished in the time allocated and also because I wanted to play a scenario that ran across the terrain board in a certain direction. First up let's look at the forces and the terrain board. 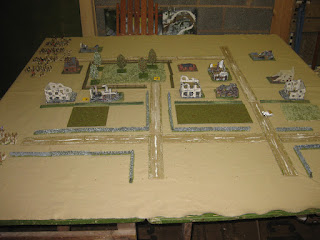 This is the game board, seen from the side the Moroccans will attach from. Any square with a wall in is partial, as is the park with trees. The other fields are open. The objectives are marked with yellow tiles.

The attackers were allowed 220 points, and the defenders 140. Both chose two platoons, leaving the rest as reserves. The Defenders deployed first, as seen in the pictures below:

The Anarchists deployed one platoon on the left in the buildings clustered around the fountain plaza. They are deployed behind the first row of buildings in classic PBI style.

On the right they adopted a more aggressive posture, taking the buildings and having a command post behind. Positioning of command is even more important for militias as their officers only have a one square command radius.

The opening move of the game saw the Moroccans deploy on their right and launch a dash across the open ground to occupy the buildings that were empty. This turned out to be a bit of a disaster. They took casualties from opportunity fire, and then the Anarchists immediately launched a counter attack in their turn, assaulting the square. In a fierce round of bloody combat the anarchists fought their way in, and this was the result (Moroccan dead markers to the left, anarchist to the right). 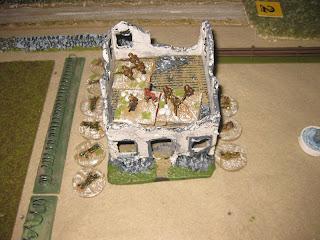 I think that the Moroccans never really recovered from this combat, which surprised both me and Will. Phil, having played the game once before was some what less surprised. Undeterred Will moved the rest of the platoon into the neighbouring building.  In this position he was subject the effective opportunity fire from all sides. Not a happy place to be and he took casualties, as you can see in the picture below. 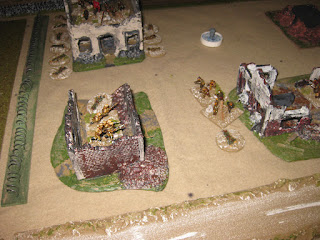 In this position it was only a matter of a short period of time before he'd be under pressure again from the Anarchists, who by this point knew no fear. 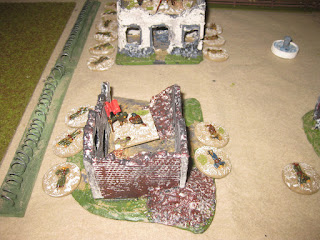 This picture shows the result of the frenzied assault by the Anarchists. All the Moroccans dead, and also all of the Anarchists except for their triumphant flag waving command group. 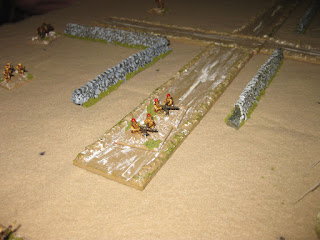 But not to worry, - Will finally got somewhere with a reinforcement roll and his support team were on the table and moving up. The lack of automatic weapons had made both players a bit relaxed about clustering squares. By this stage it was bit academic as there were hardly enough bases on the table to cluster at all. 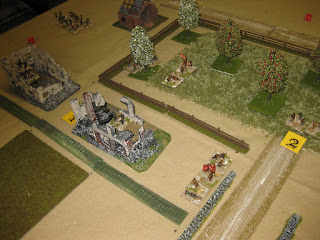 At the other end of the board the Anarchists started to move their units across to bolster their left, to ensure that there was no last minute breakthrough by the Moroccans (no worries really, as break tests were now being failed) and also to sit squarely on the objective markers. 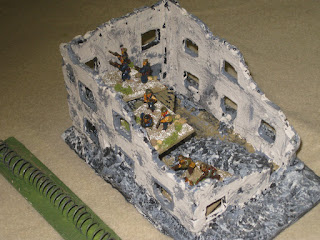 I just like this picture of the militia in this ruined building. I have no other reason to put it here, and no context. 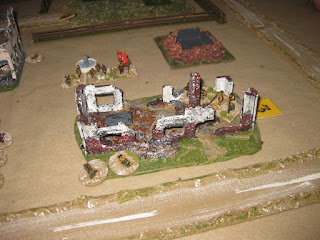 The HMG's have finally opened up on the  Anarchists and actually hit some bases. Phil was not amused. 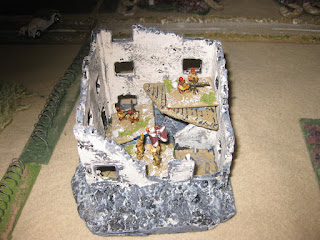 ﻿
The Moroccan HMGs had ensconced themselves into a ruined building and were laying down some heavy fire. Alas it was all too late. 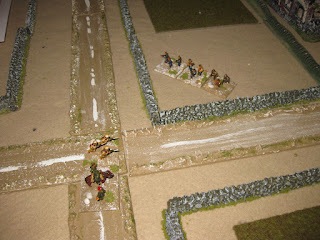 The final desperate attack by the Mococcan Company Commander and his rifle section.  The Anarchists were quick to block them in.

So it ended with a massive Anarchist victory.

The post game de-brief was mixed. There's a lot in PBI & so in BAIT that we like, but it is also infuriating. Phil tried to rally off casualties 5 times, and failed each time, for example. Motivation & APs can still be really annoying, - and we were spared mostly the high point rolls needed for artillery and so on.

I really want a game at this level, and I'd love it to be an RFCM game. I'd really like it to be BAIT. I think we need to have another go, and we probably need to throw in some armour, dinaminteroes and AT guns.

But love at first BAIT? No, I don't think so.

On a side note, this is my 300th blog since I started in October 2009. In nearly 3 years I've doubled my target of, on average, posting once a week, and picked up just over 100 followers (we hit 100 a few months ago, then some one left so I didn't say at the time).

The aim of really talking about being a grownup and wargaming has been more honoured in the breach than the observance, with the "Real Life" series of blogs seeming to have dried up.

My favourite posting is this one: That Whole Yahoo Group Thing. The most popular is the one about Battleground.

The most commented upon is Osprey's Nasty Little Book, another I'm quite pleased with.

Of course those I wrote when I lost my job were quite painful to do and I nearly deleted them. I'm glad I didn't as they brought forth some really heartfelt support, for which I'm grateful.

Next target is blog 500. Hope you are still with me then.