This was a look at  the Battle of Langport using Armati. As I said in my previous post Phil is developing (or rather going to develop) a refight for the Battlefield trust, following on from Naseby & Second Newbury. This was a first run out to see where the problems might lie. 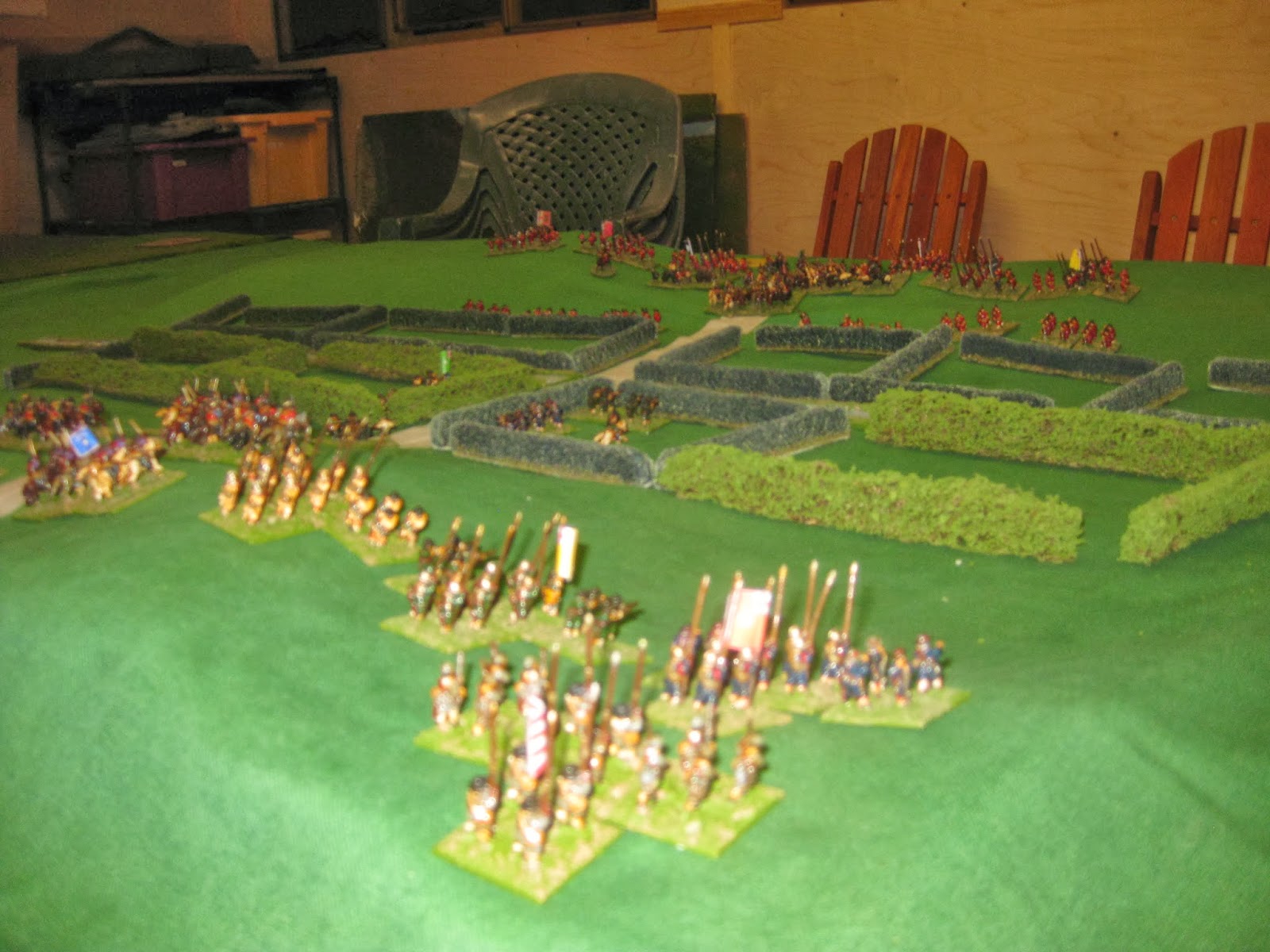 The ground scale is probably a bit off. For this first game I put out what looked right. The picture above is the battlefield from the Royalist position, looking towards Fairfax's army. Phil took the NMA this time, and I got Goring's army. For this game I had to press gang all of my red coated figures to make the NMA, so no comments on any vaguely looking Royalist flags flying on the other side of the table, please.

They look quite impressive, as you can see below. 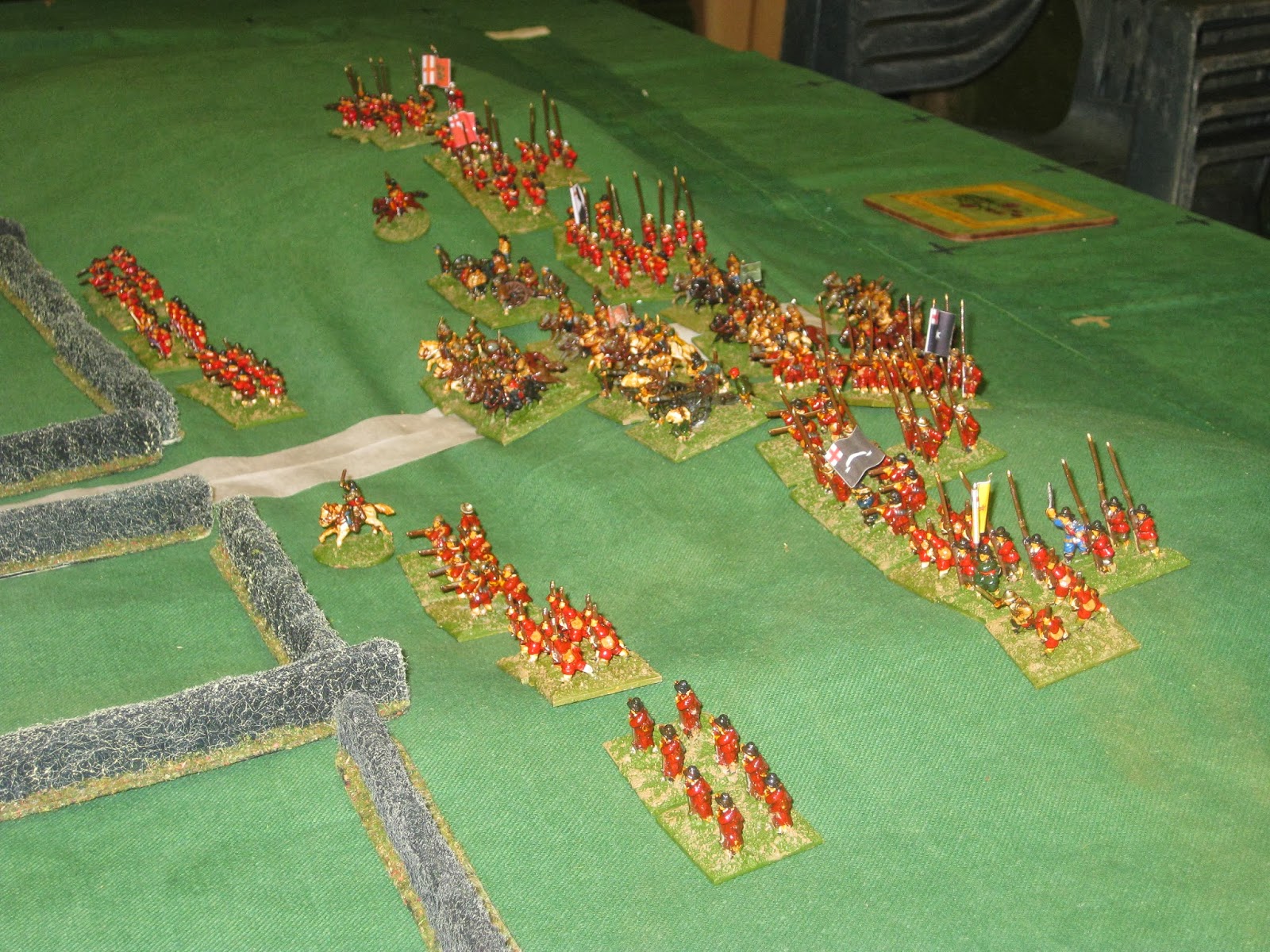 Phil started off by pushing his forlorn hope through the fields on his side of the brook,  whilst his artillery opened up. We had a bit of a discussion about restricting targets. Historically Fairfax suppressed Goring's guns at the head of the lane, and also roughed up the infantry in the dip, but seemed not to have targeted Goring's cavalry. We came to the conclusion that these should therefore be out of range. 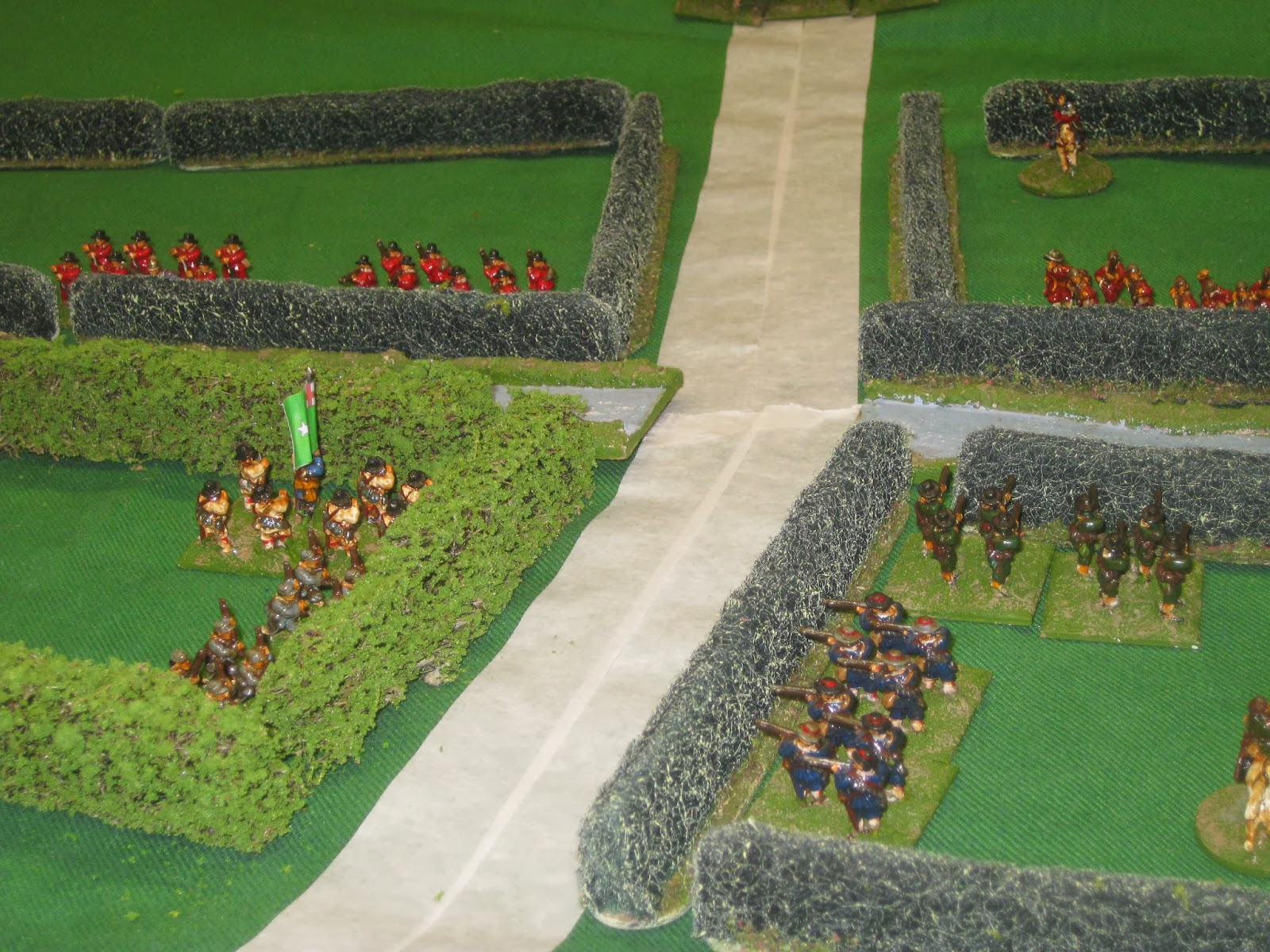 Our Forlorn Hopes exchanged shots across the brook to no good effect. 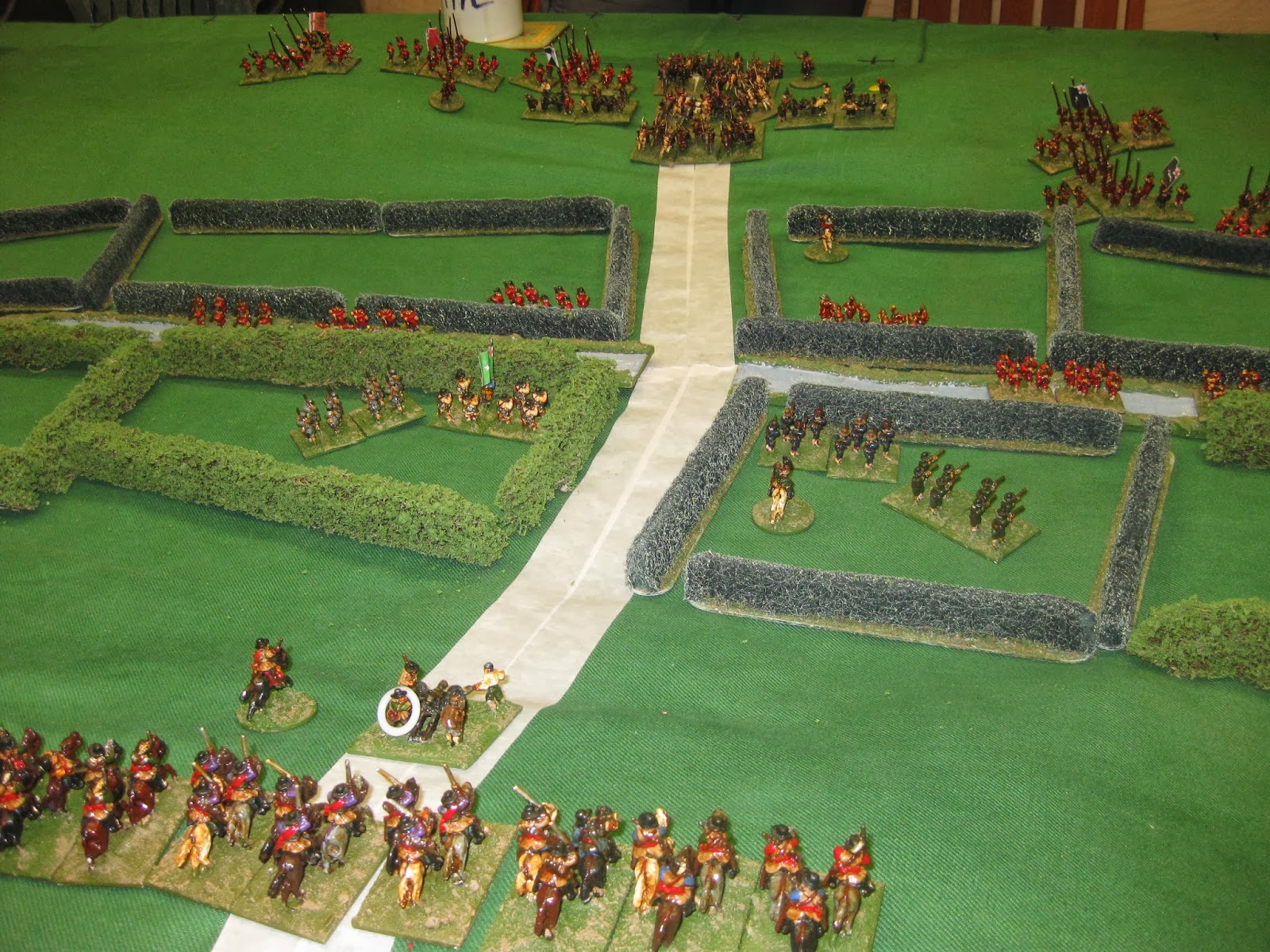 I could see I was going to get overwhelmed in the dip if I didn't take action, so I moved my forlorn up from covering the road to cover the brook. Phil's artillery was getting in some sharp practice, and I took a permanent hit to my guns, represented by the white ring (Phil has posted amendments for Armati over on his ECW blog that include disruption before loss of hits from artillery fire). 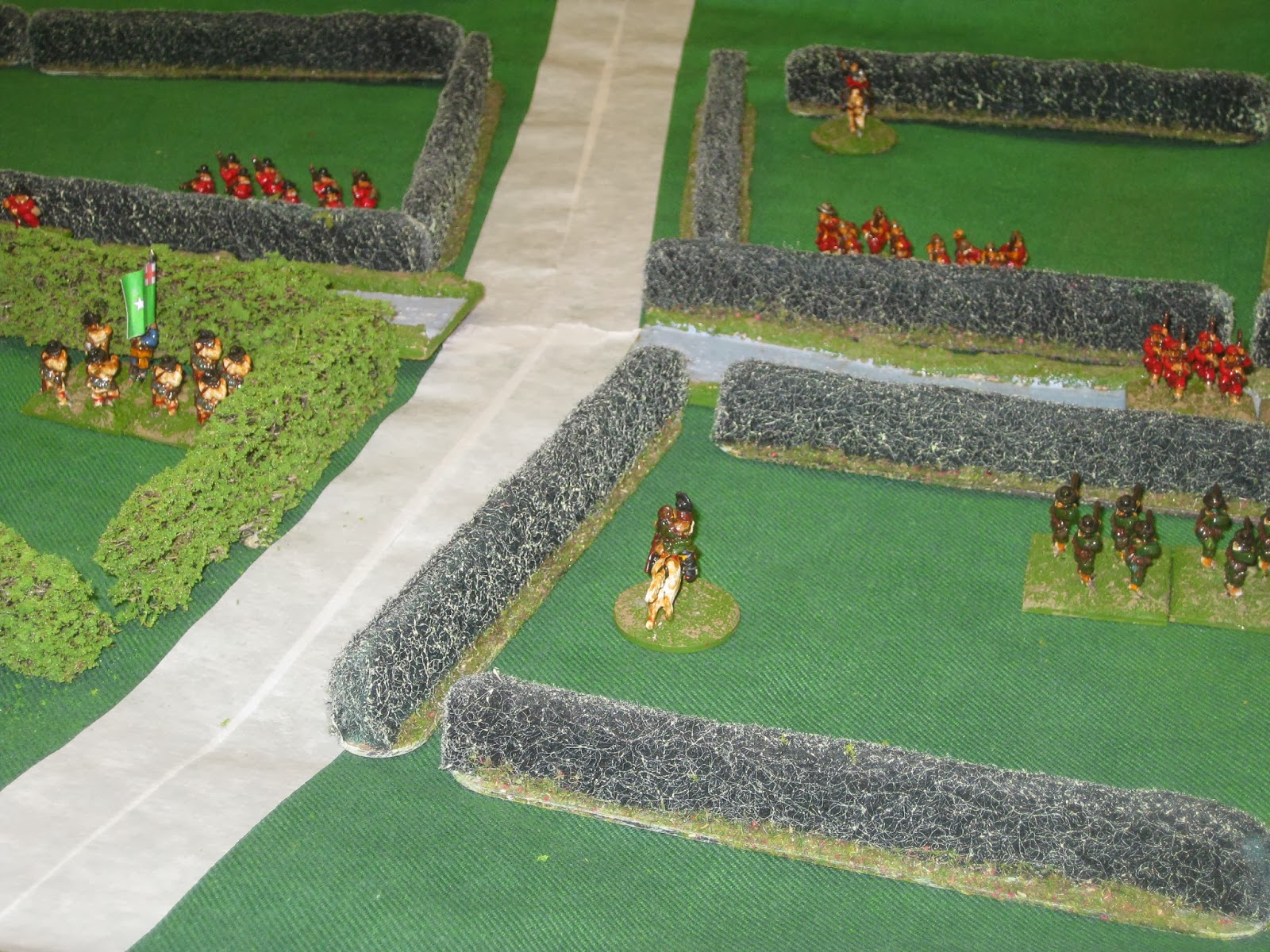 Despite my best efforts, I quickly lost one of my forlorn units to musketry (despite cover from the hedge and bank). The Royalist Colonel Slaughter looks a bit exposed in that field. 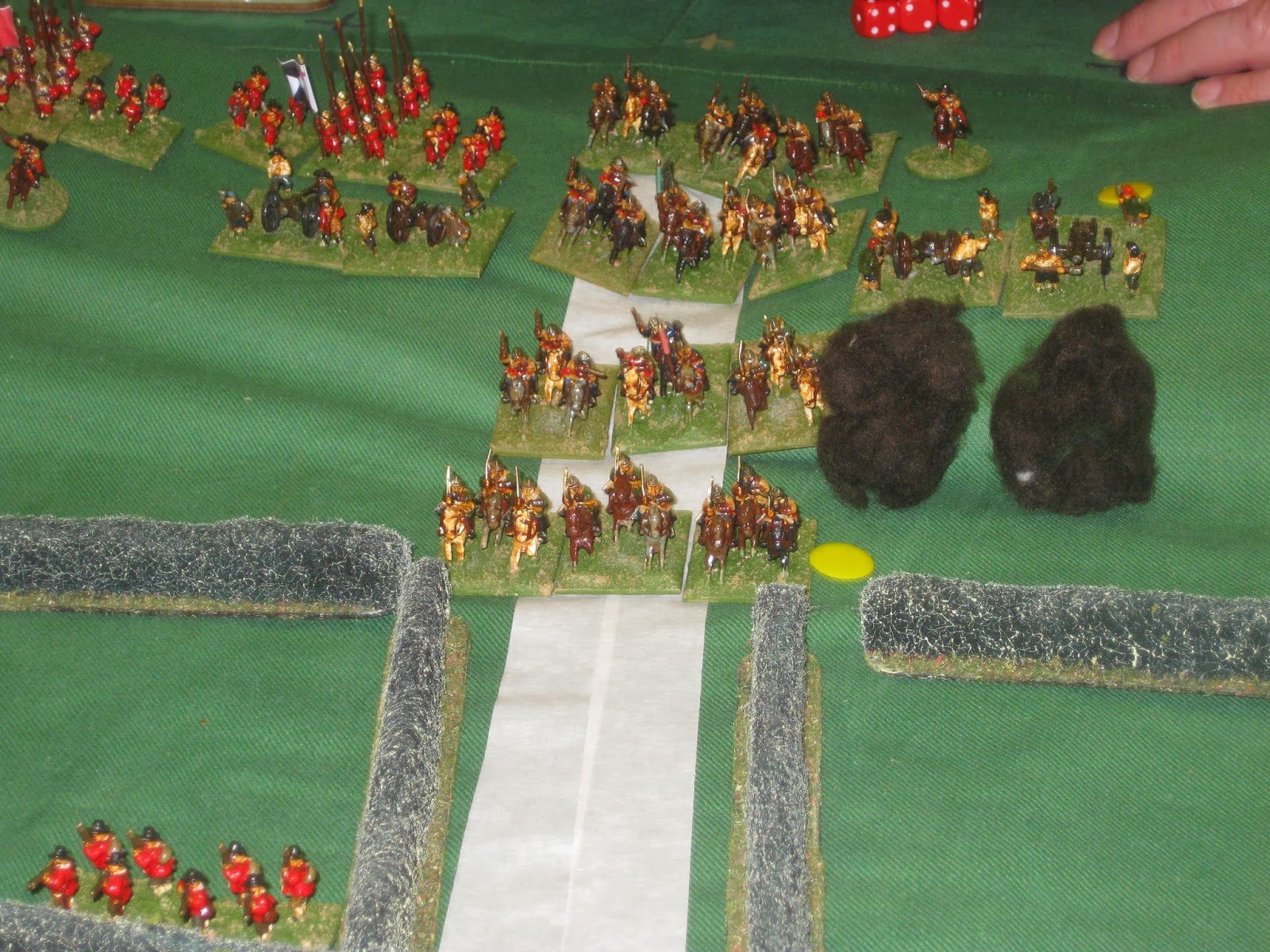 Confident he had the upper hand in the infantry fight, Phil moved his first cavalry unit into the lane, taking some disruption in the process (the yellow marker). 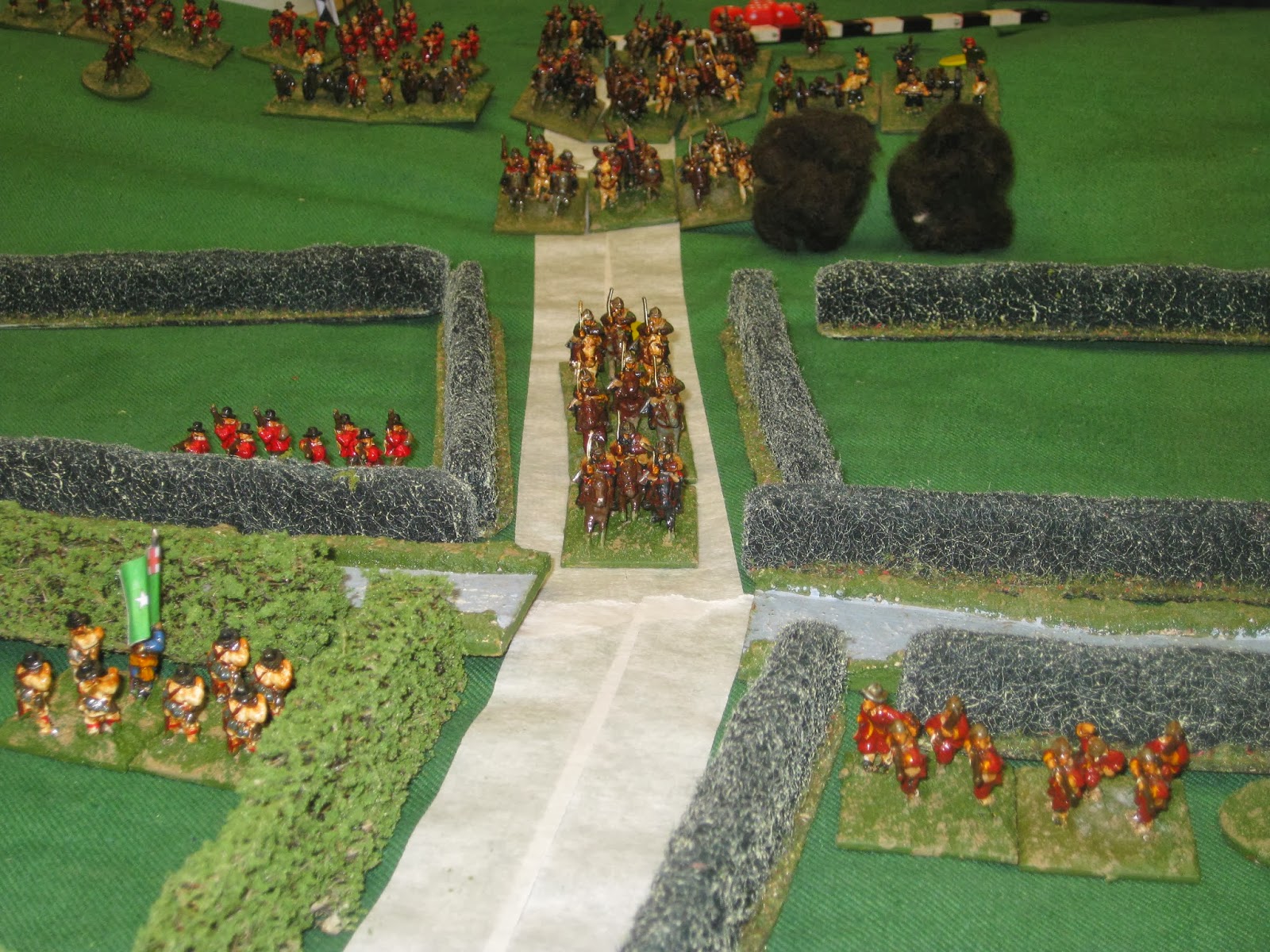 This is the picture you all expect - Major Bethell's troop heading towards the ford, as the Royalist foot are driven off on the right. 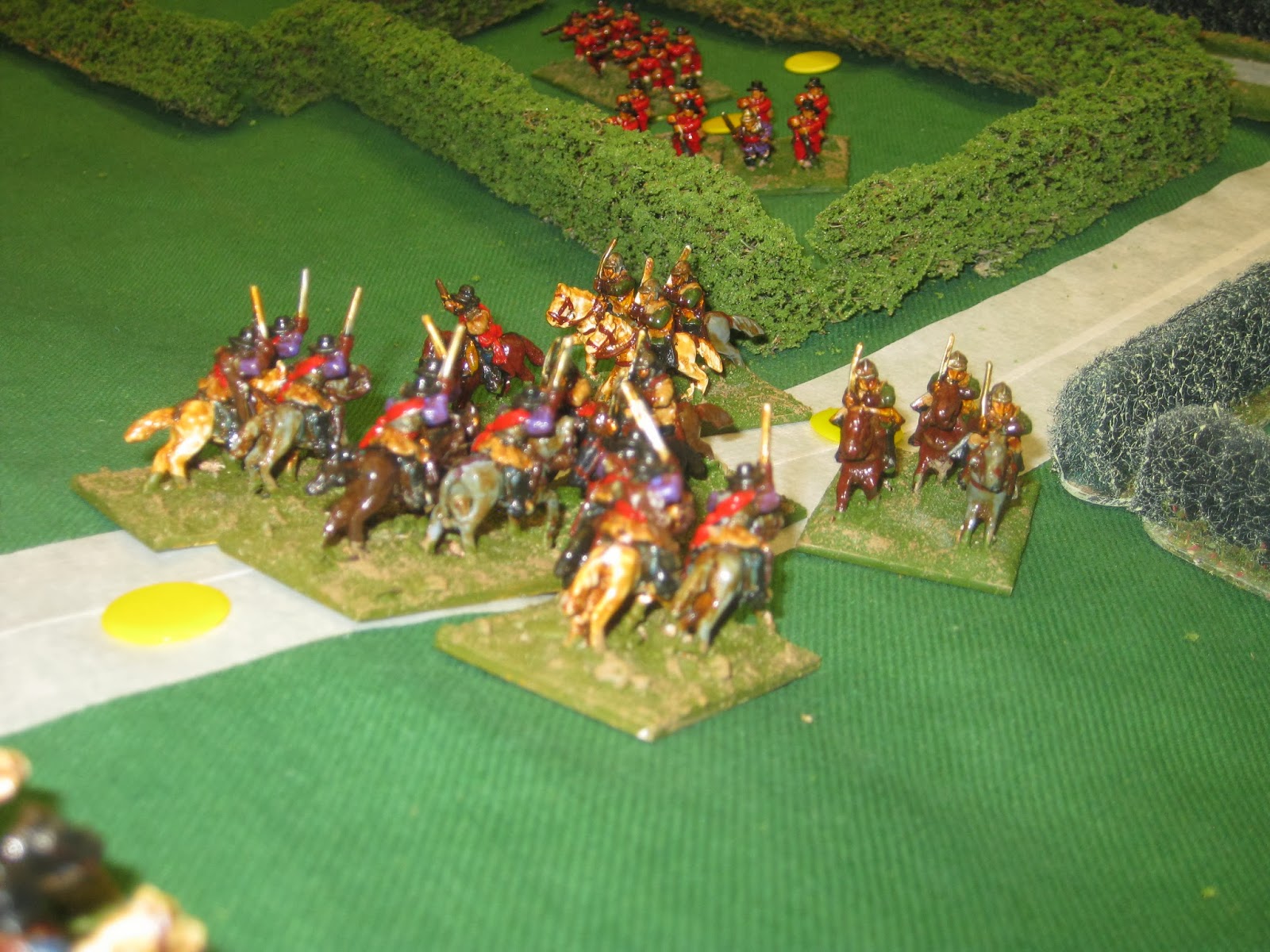 As Phil emerged form the lane I won the initiative roll (despite being two down) and so charged. This lead to another talking point as to how "up for it" the Royalists were. Historically Bethell was allowed to get out of the lane and initiate the charge. Perhaps we need some mechanism to deal with this. Or perhaps the initiative difference is enough and I was just lucky. 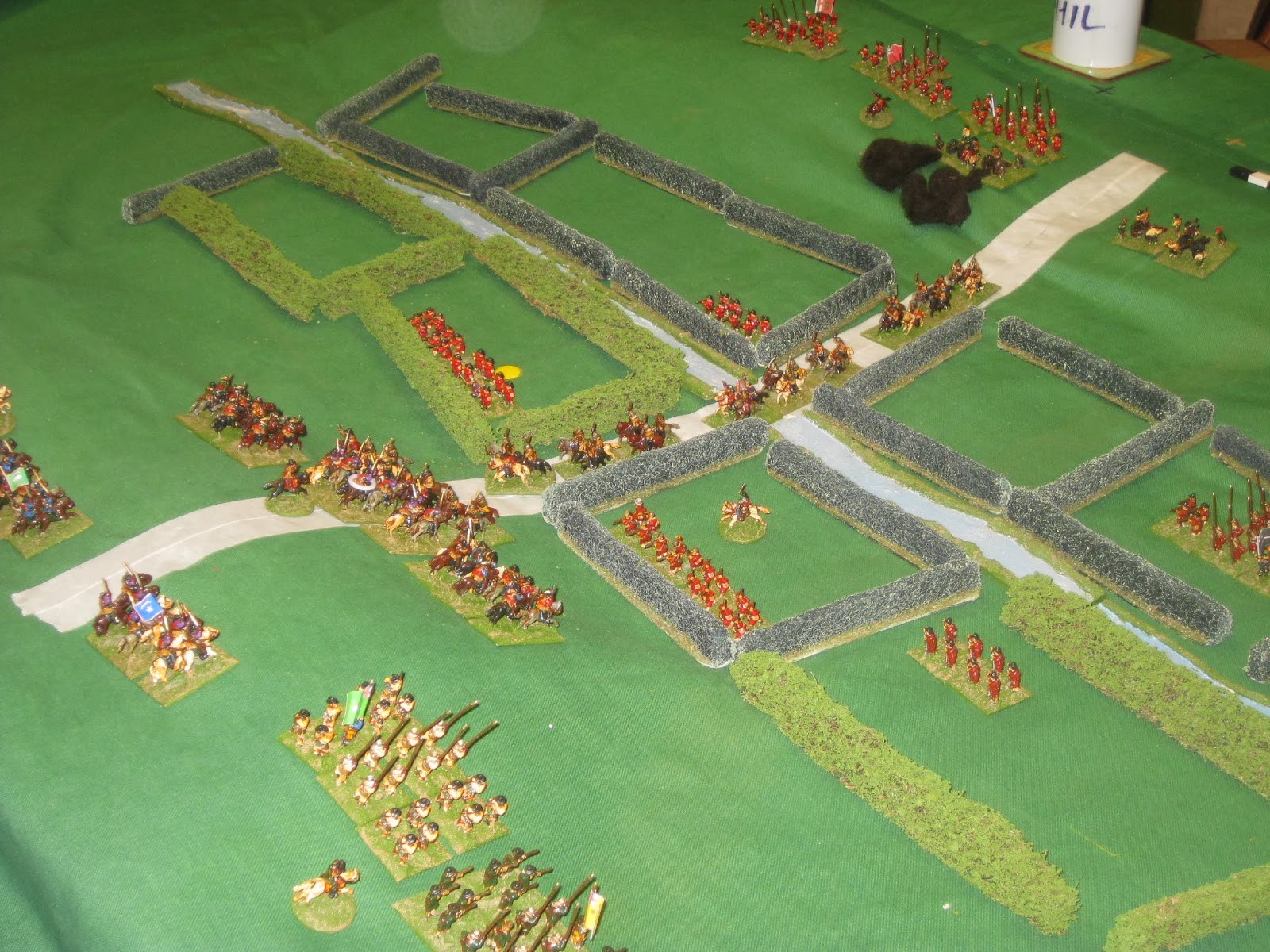 As the cavalry melee developed I brought up my reserve horse and tried to bottle Phil up in the lane to stop him using his superior quality (all veterans with an extra +1 in combat over my horse). 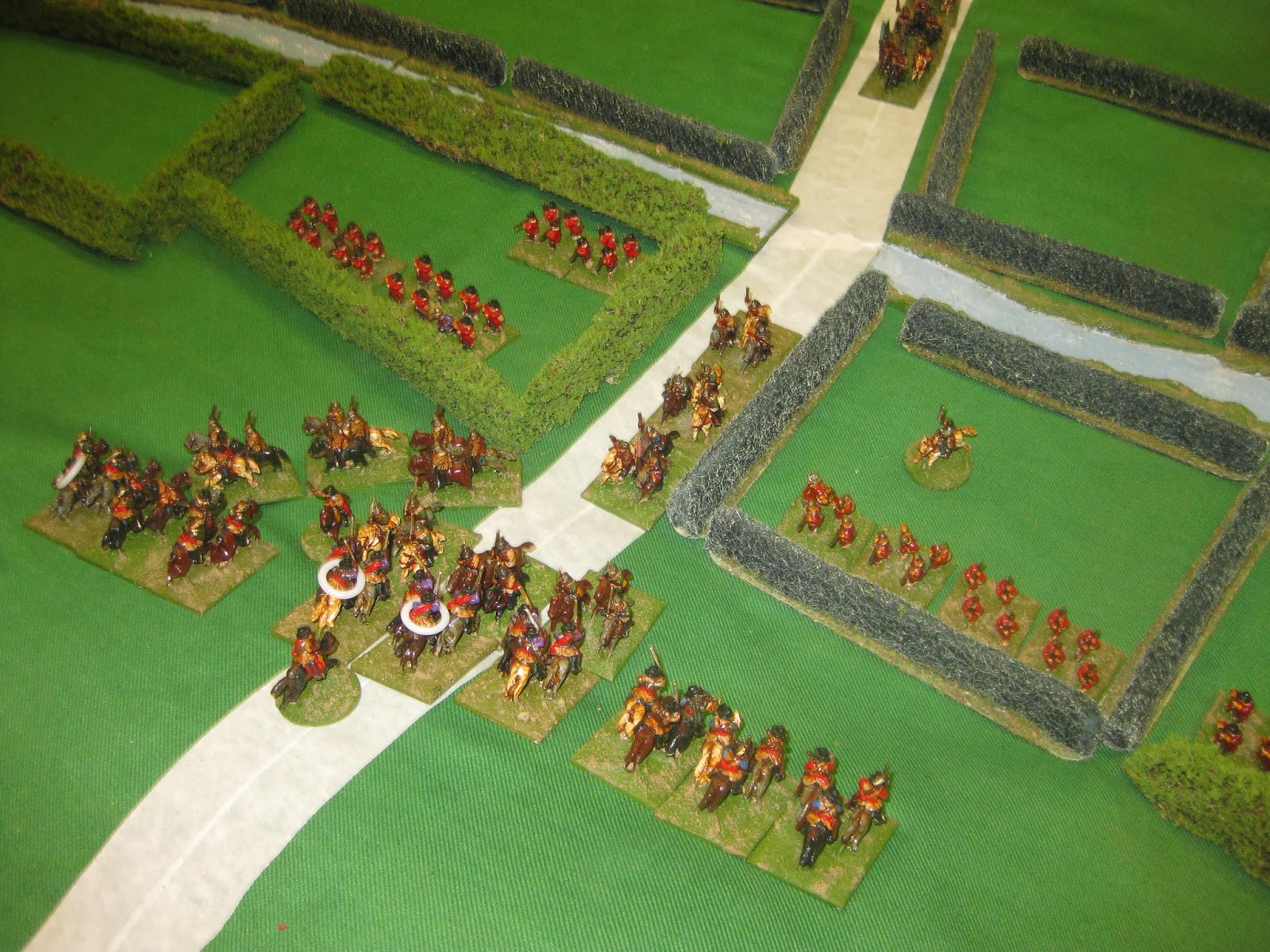 Phil was able to get one unit round the right rear of his leading squadrons and engage my left hand unit. 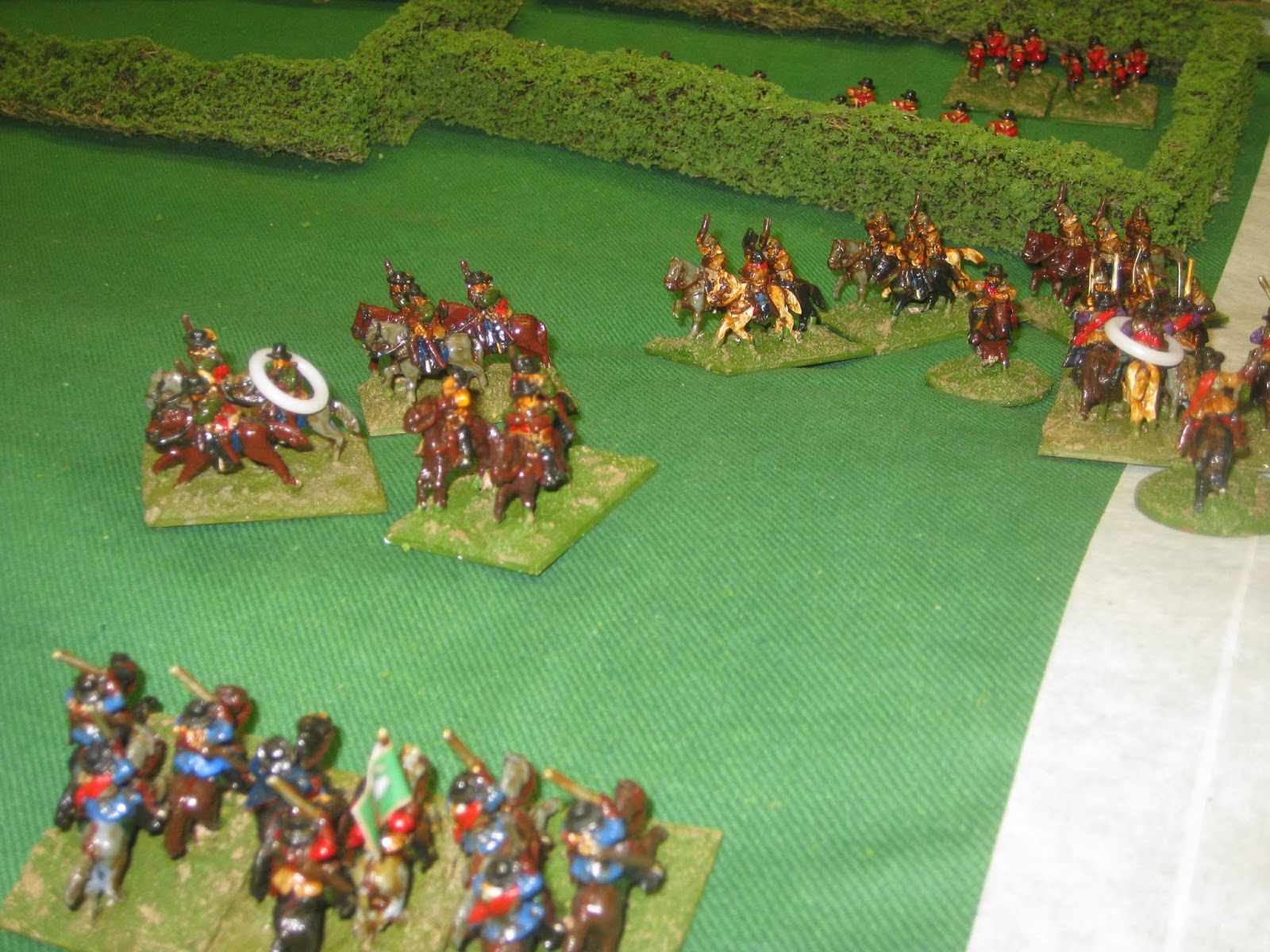 Phil won the combat and using his impetus broke my unit. 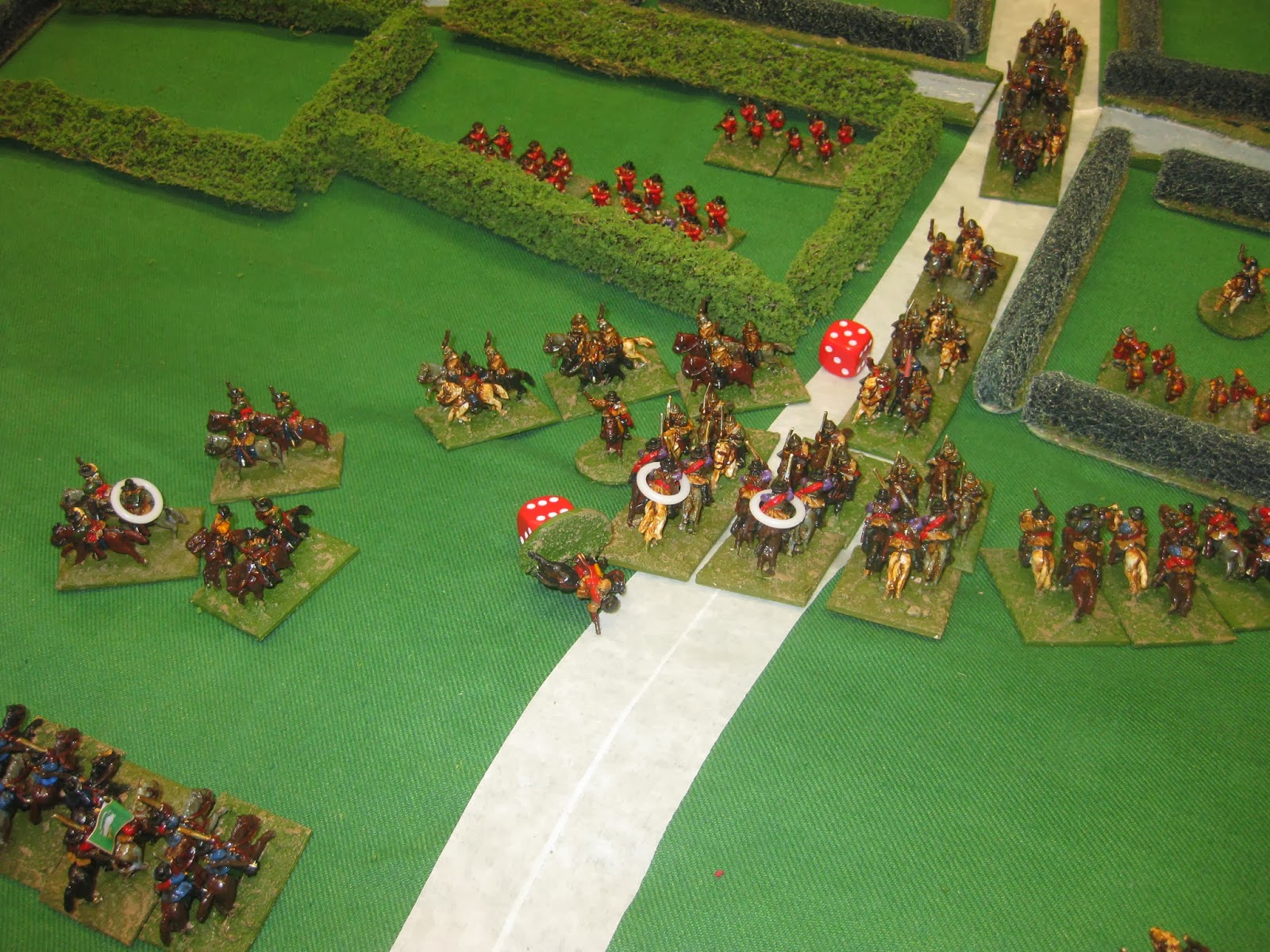 I was able to get my right hand unit into combat with Bethell's command to give myself a 2 on 1 situation. Phil brought up another unit to provide rear support, and I threw in Goring to inspire his men.

He immediately became a casualty, and disappeared from the field. 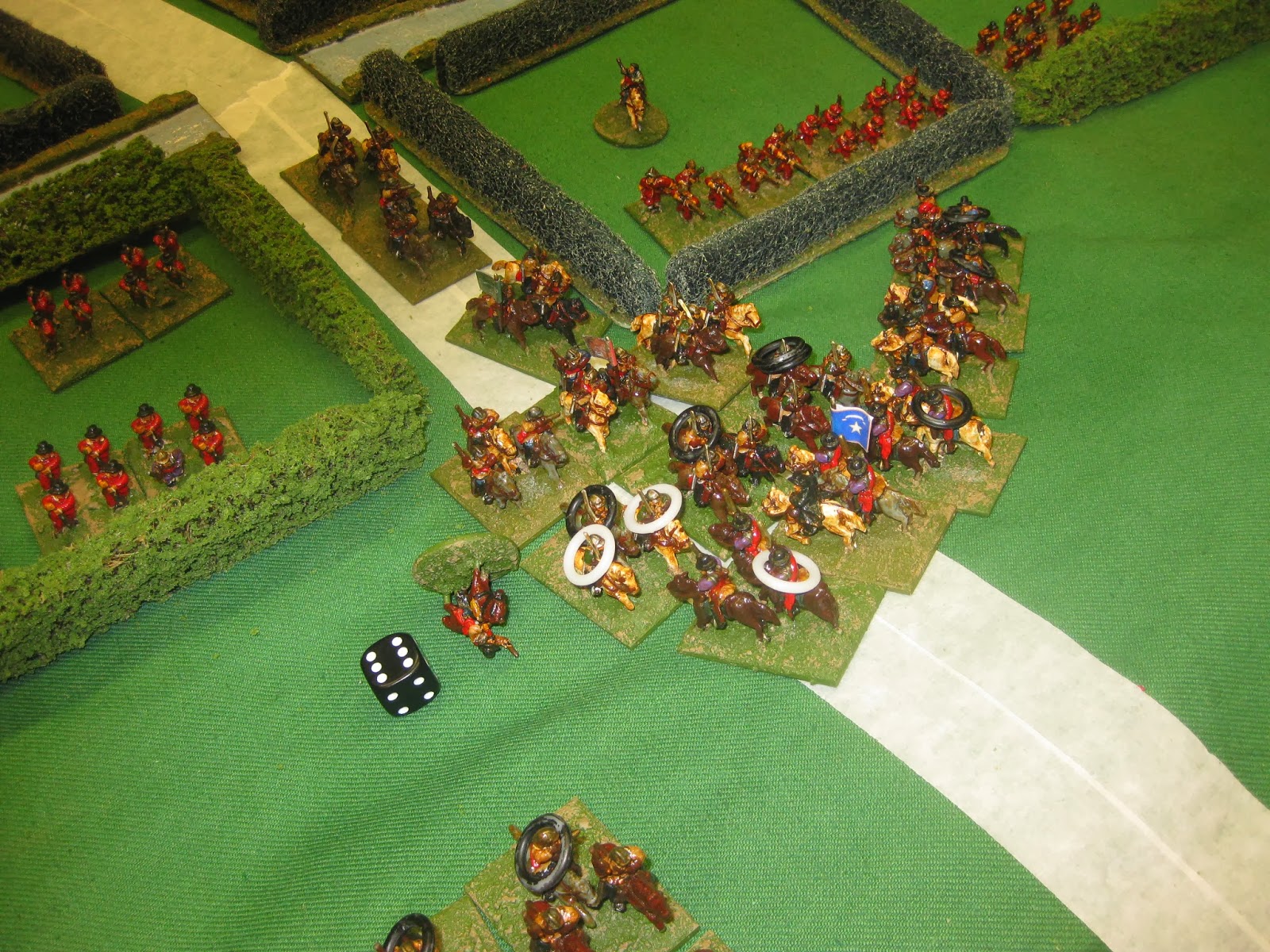 This tussle in the middle was becoming epic. Bethell's men were under massive pressure, and Bethell was likewise injured and retired. 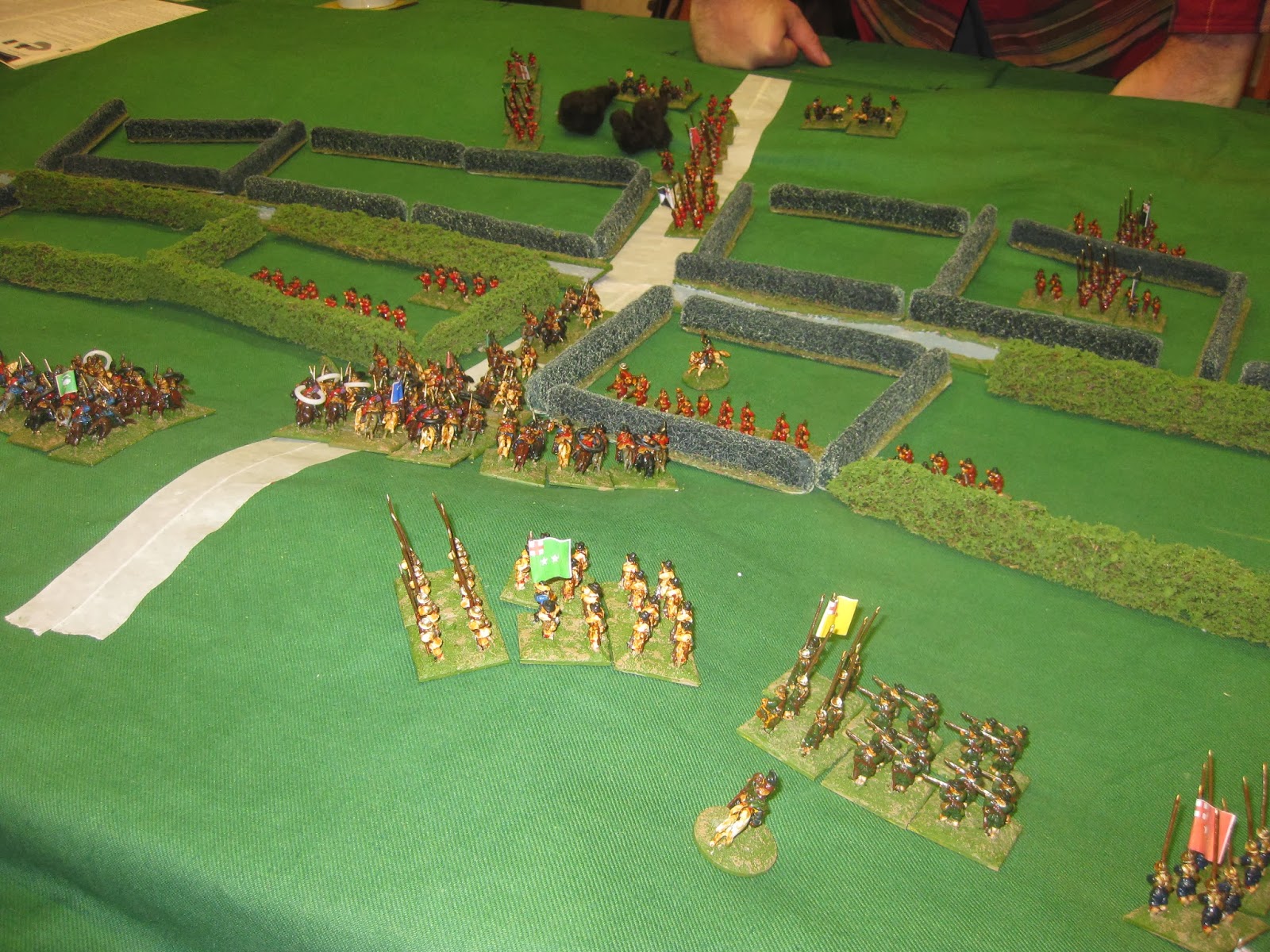 At this point I started to march the Royalist infantry off. Bear in mind this is a rearguard action, and I probably should have done it earlier on. 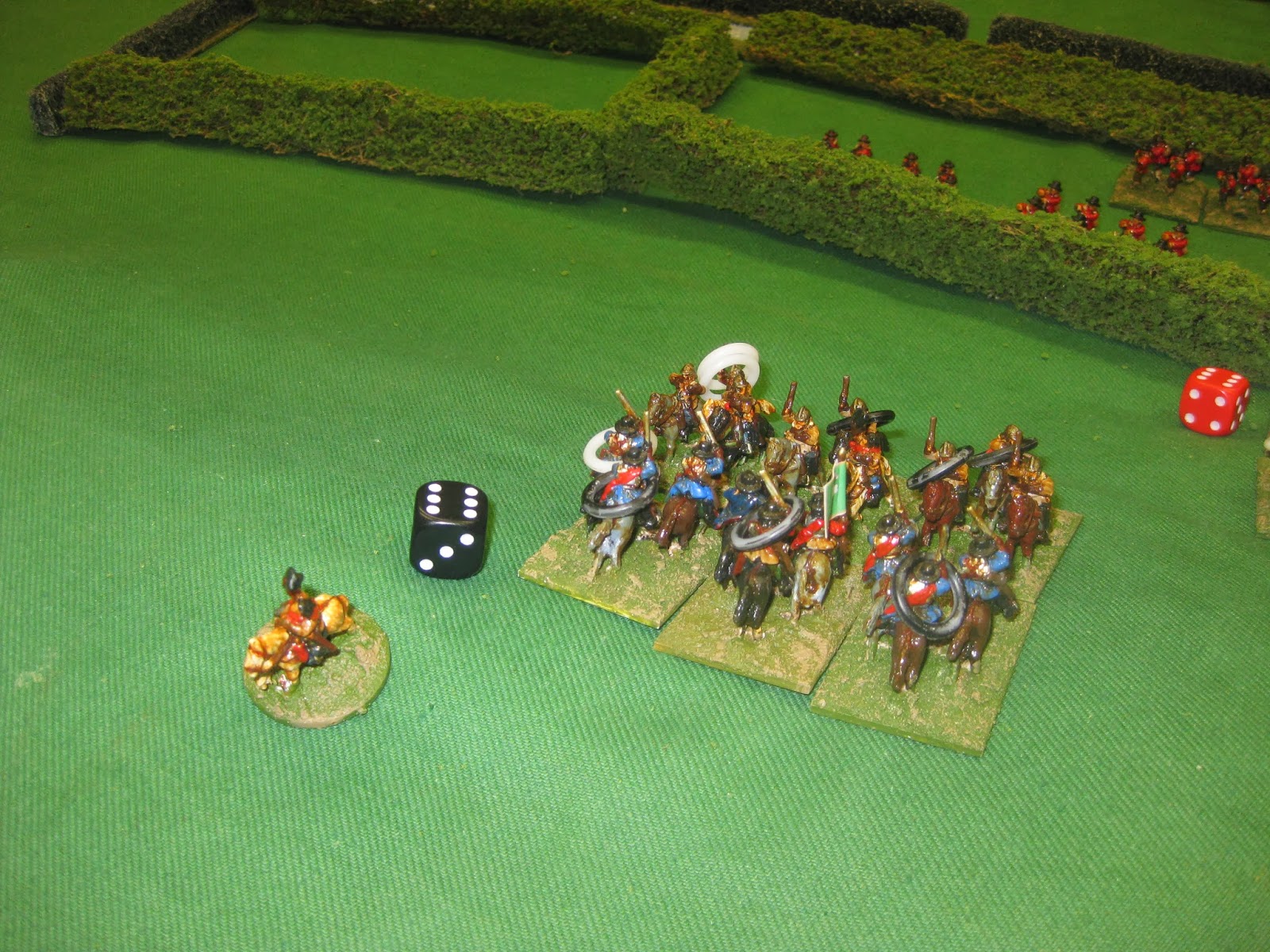 Another cavalry melee, another dead or fleeing officer.... 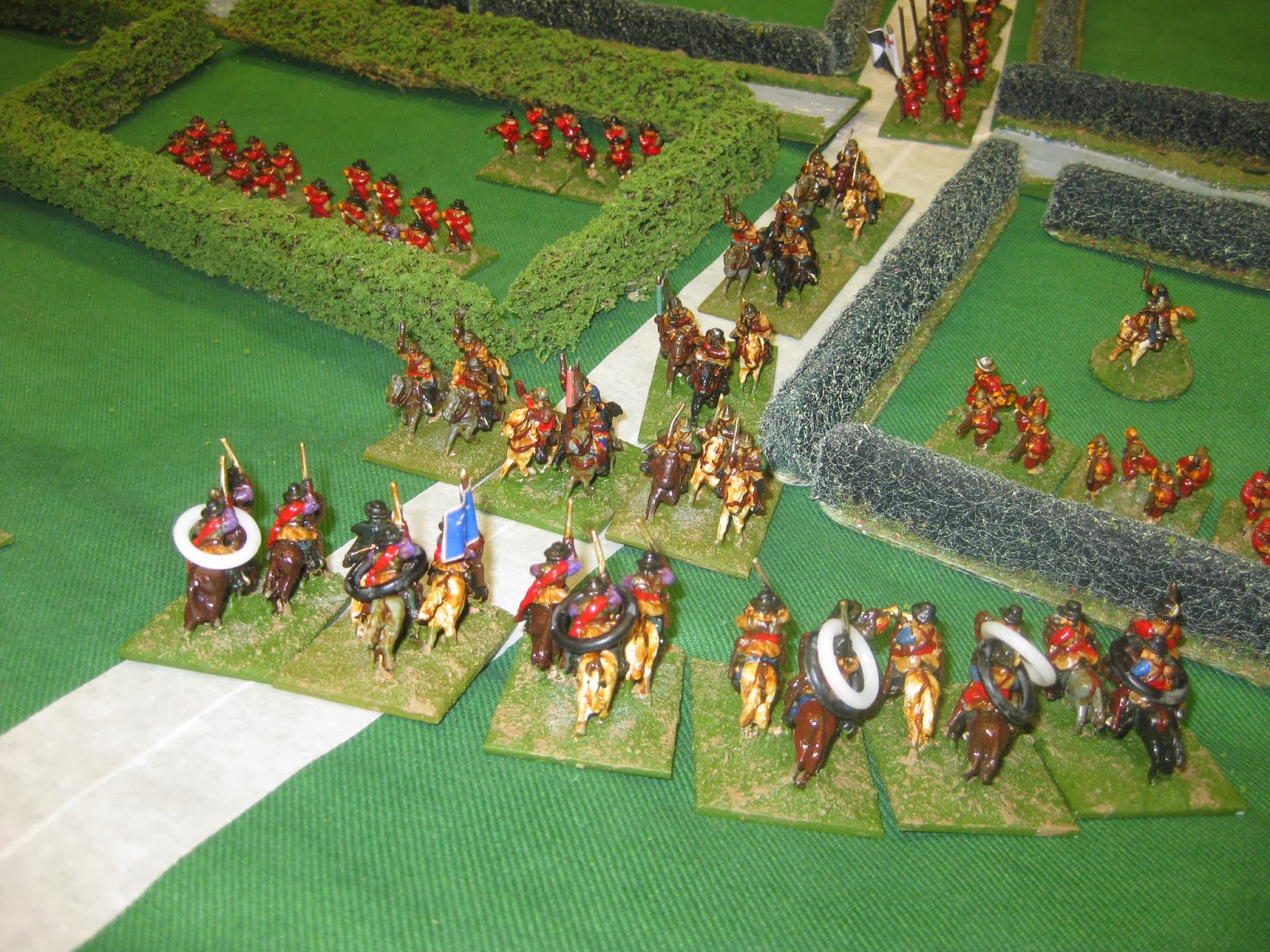 Bethell's troop finally broke, and was removed. Their support passed the "routed into" test. Bethell had done a lot of damage to his opponents, which were roughed up and fatigued. The next Parliamentarian charge was going to give them some grief. 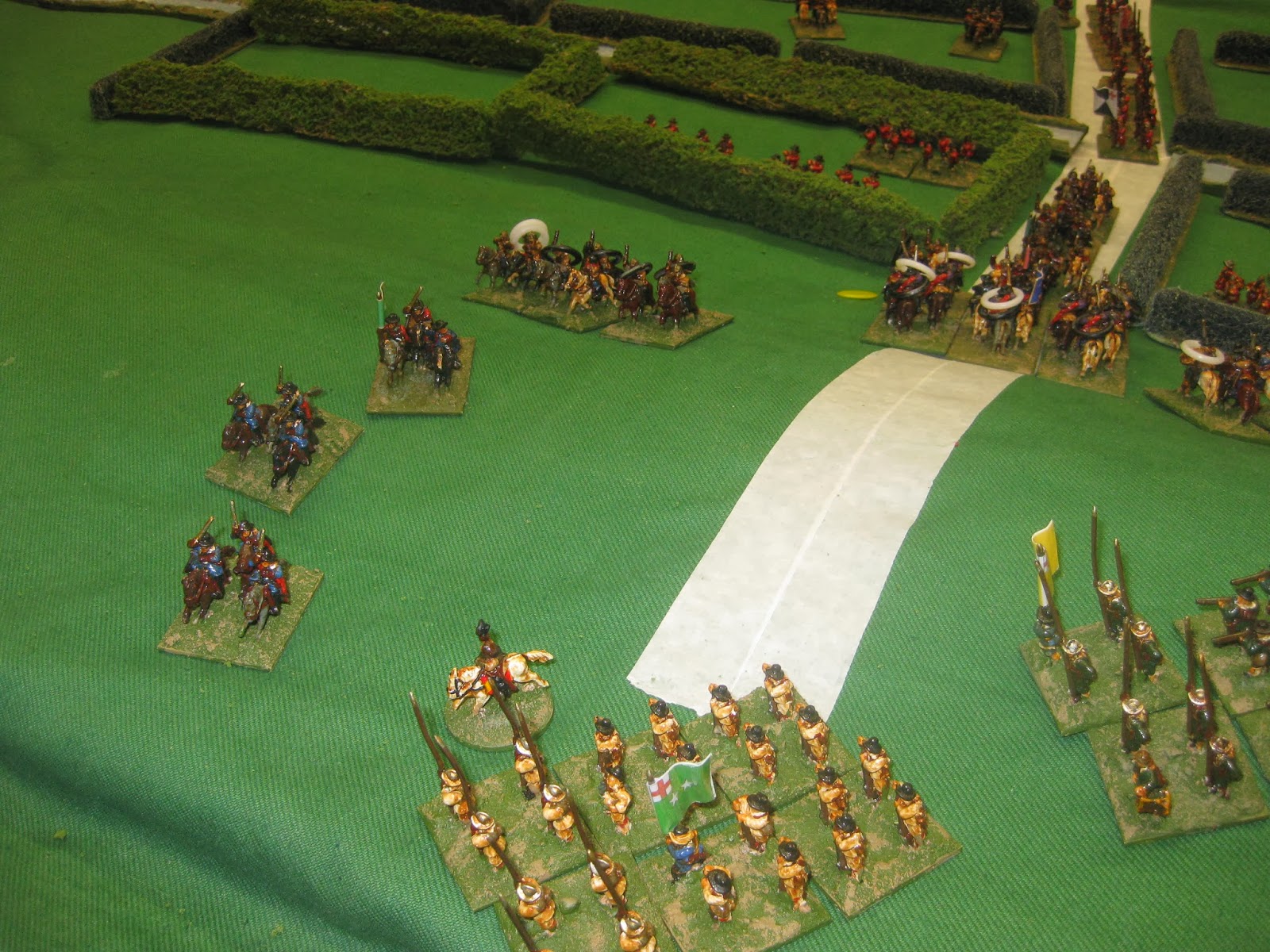 Having lost their officer, another Royalist cavalry unit broke..... 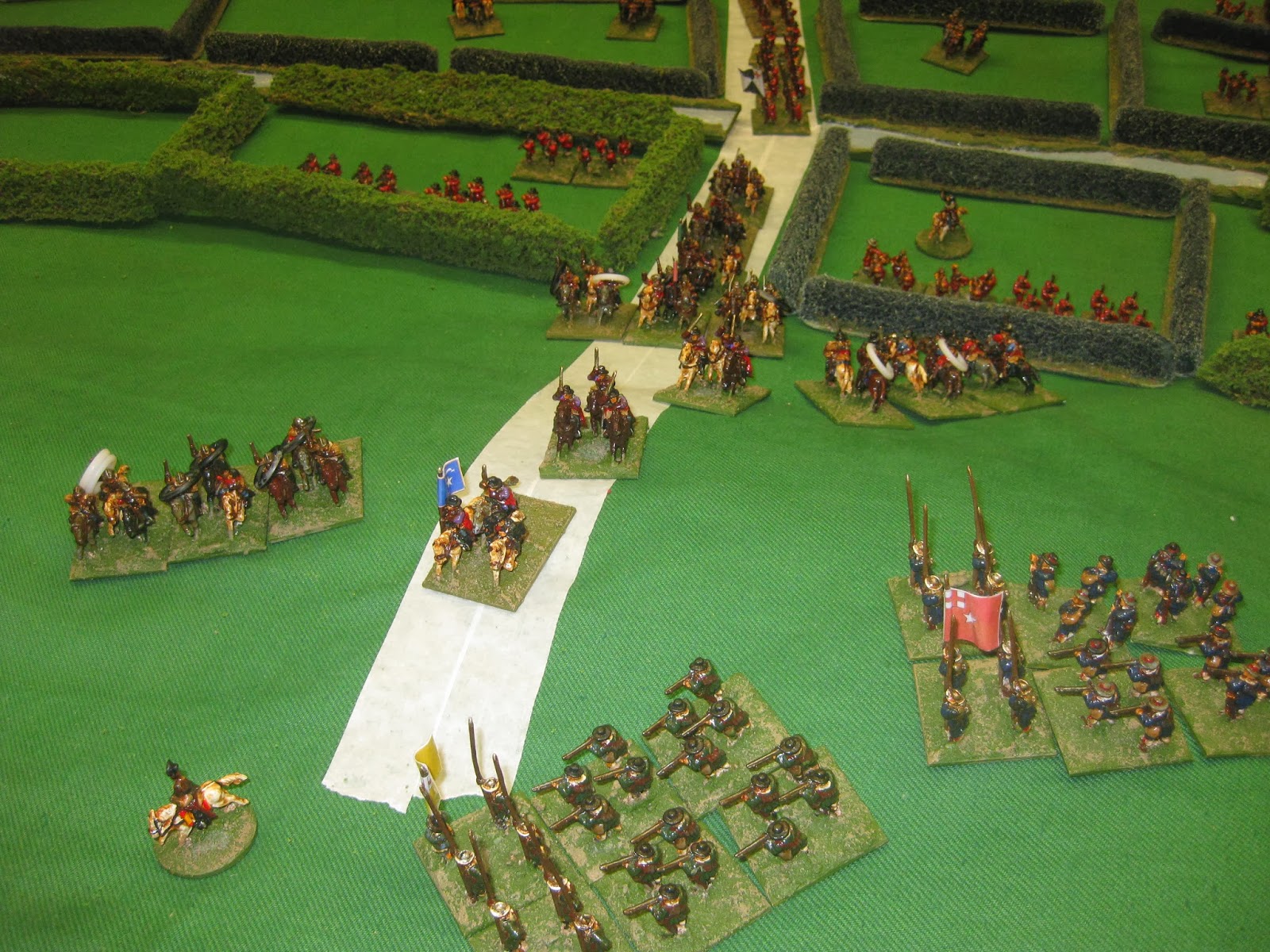 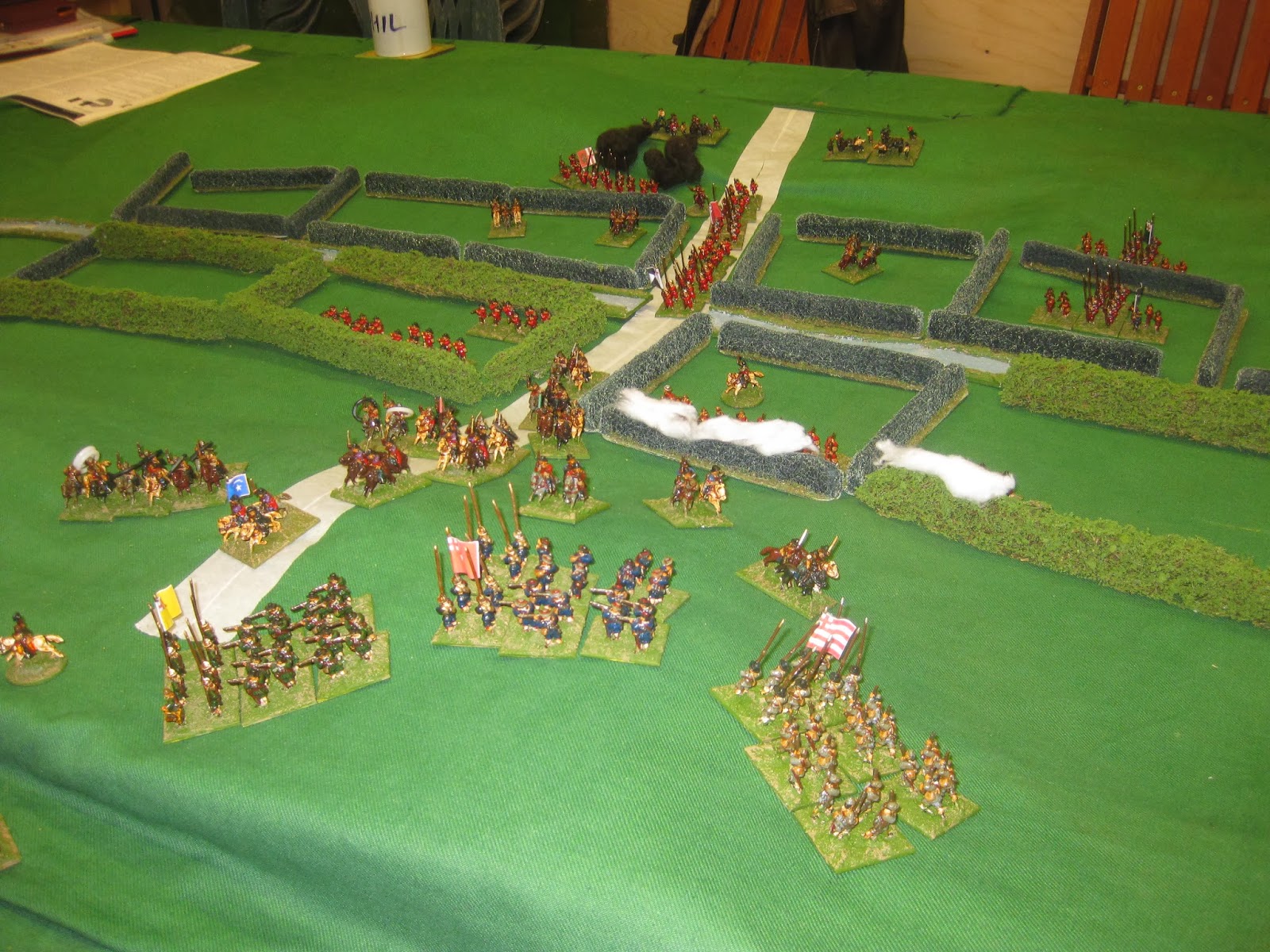 ....and the last one, broken by musketry from the enclosures. Game over.

We learnt a lot about the battle and how the narrative might need to go. The importance of the NMA winning the infantry fight and so then holding the enclosures was missed by both of us in our earlier discussions. We knew they had to win to enable Bethell's charge, but they then became a threat in their own right.

An enjoyable evening's game, with a lot of discussion as we went along. Sort of the wargame as a learning tool in this case as we tried to work out how the battle hung together.

Phil's now got to go off and do some work. That's enough for me for now.