After the abortive attempt last week actually to play a game of my revised Sudan rules against a real person this week was greeted with more success on that front. Will arrived (a little late) plus he'd also bothered to download the rules from our yahoo group and read them. 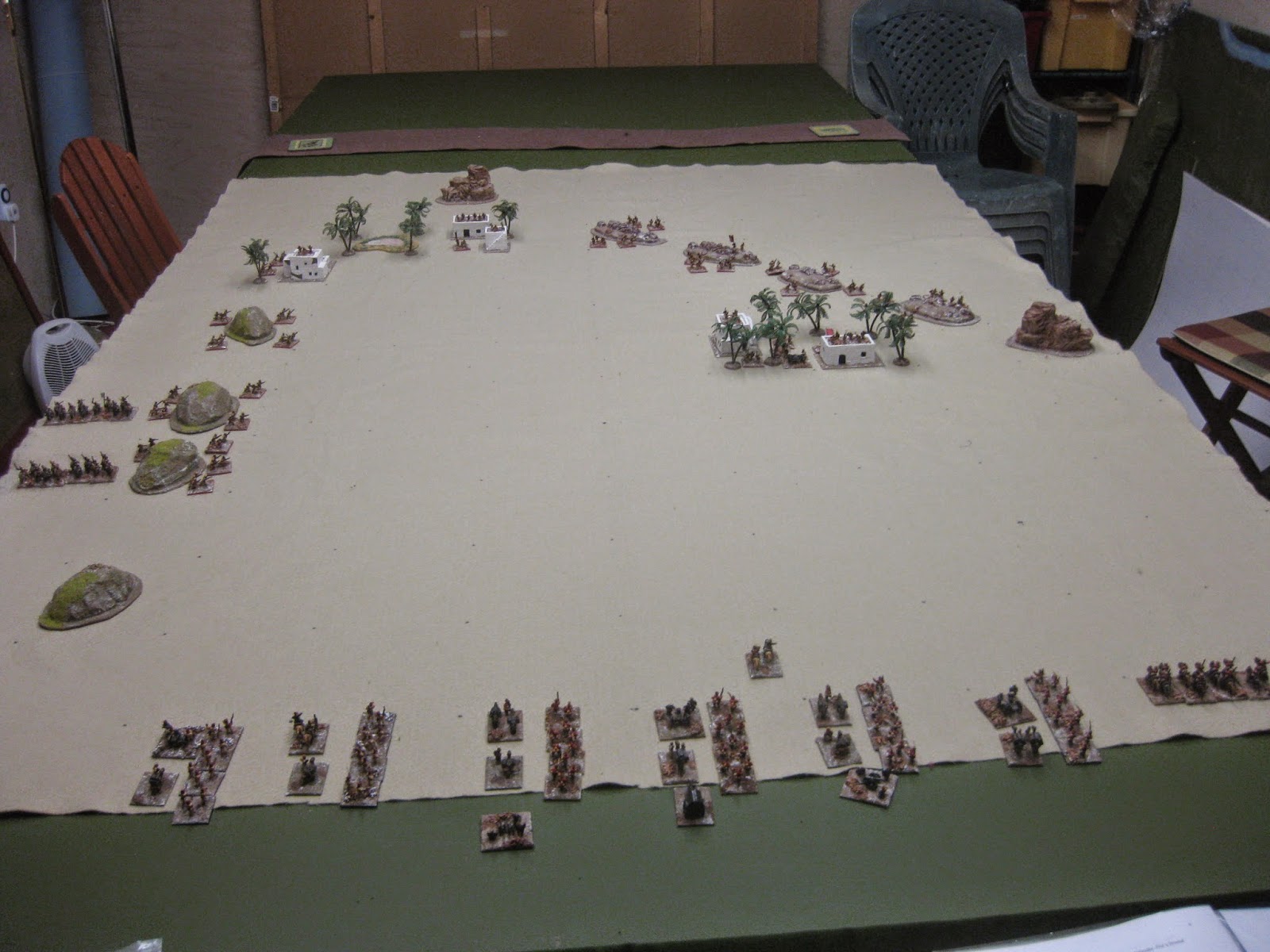 As with most of my games in the Sudan the British have to advance across terra incognita, usually looking for water or an opportunity to slaughter Mahdists. The curve ball for them this time was a couple of units of Egyptian infantry being blooded on their first expedition. 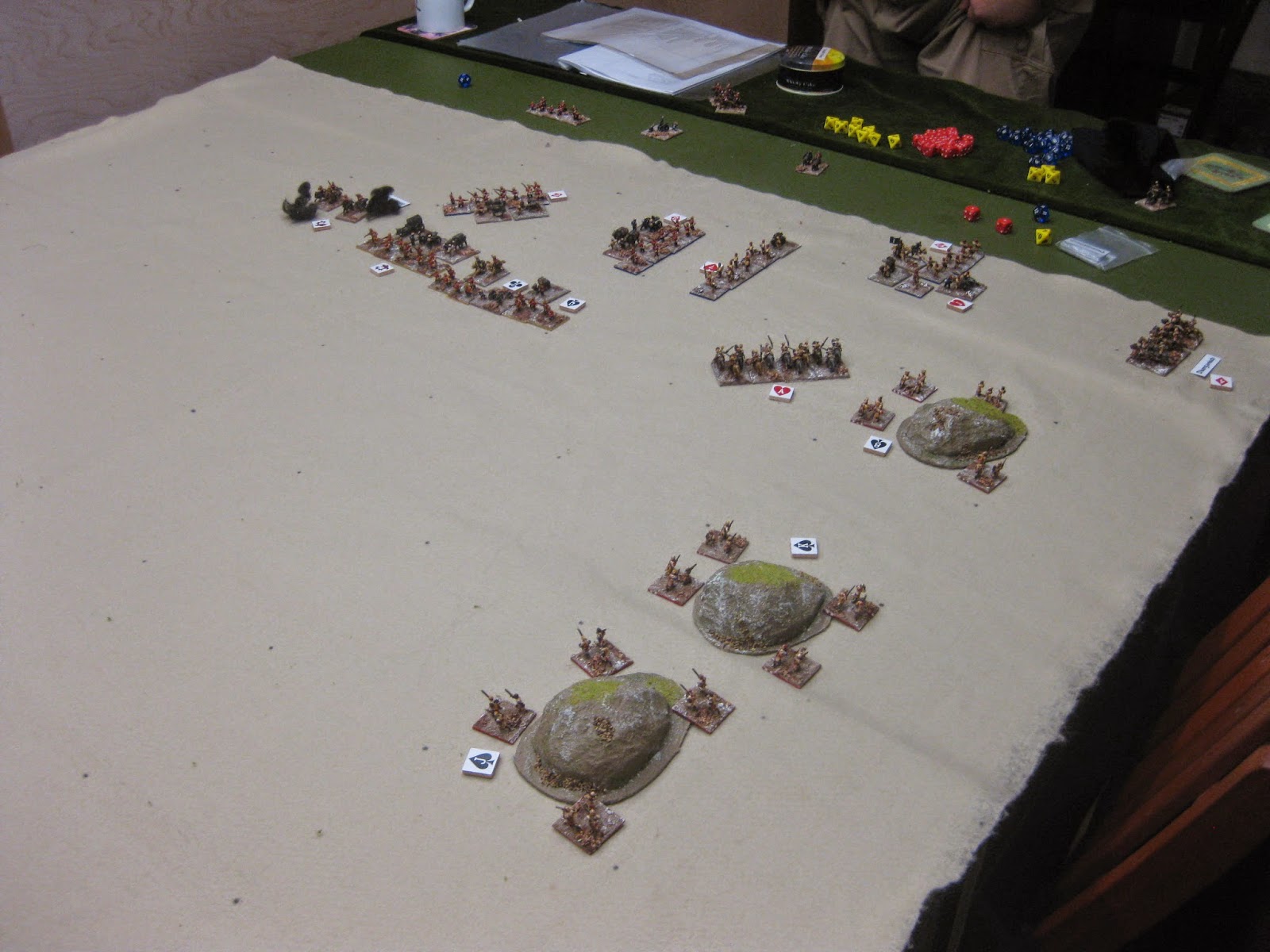 Will took a bold approach and set off to advance down the table in battlefield order, eschewing any form of square based defensive formation. I decided to sneak down the line of the hills and try to take him by surprise. 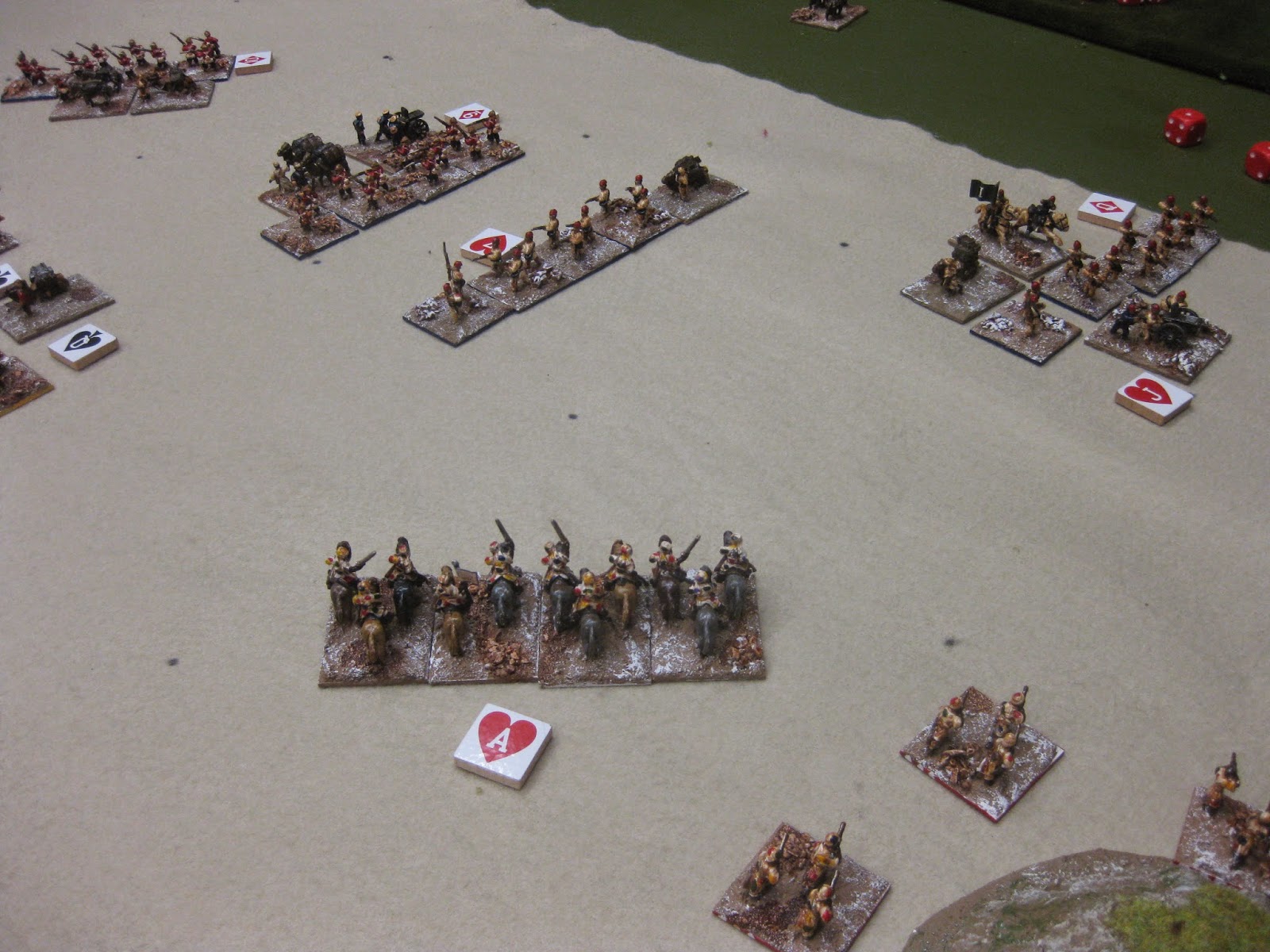 Soon I thought I had Will exactly where I wanted him. He had a battalion of Egyptians in marching order, and I had a rub of horse bearing down on them. Then Will reminded me that cavalry have to charge from a range of at least two squares in order to gather momentum. Curse him for reading the rules. 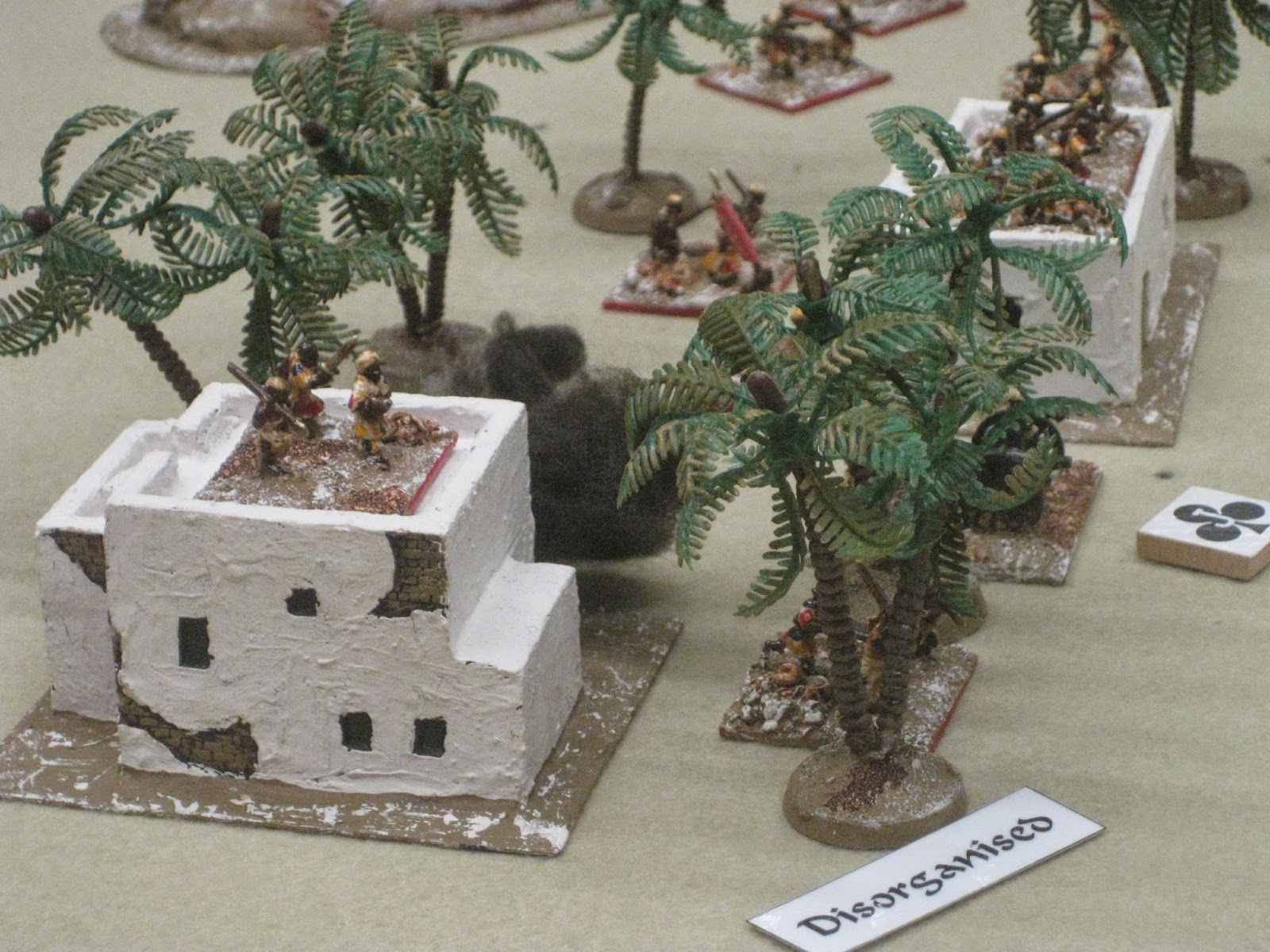 Soon the Empire forces were making their presence felt by blowing away most of the garrison of the nearest village with a barrage from their screw guns. 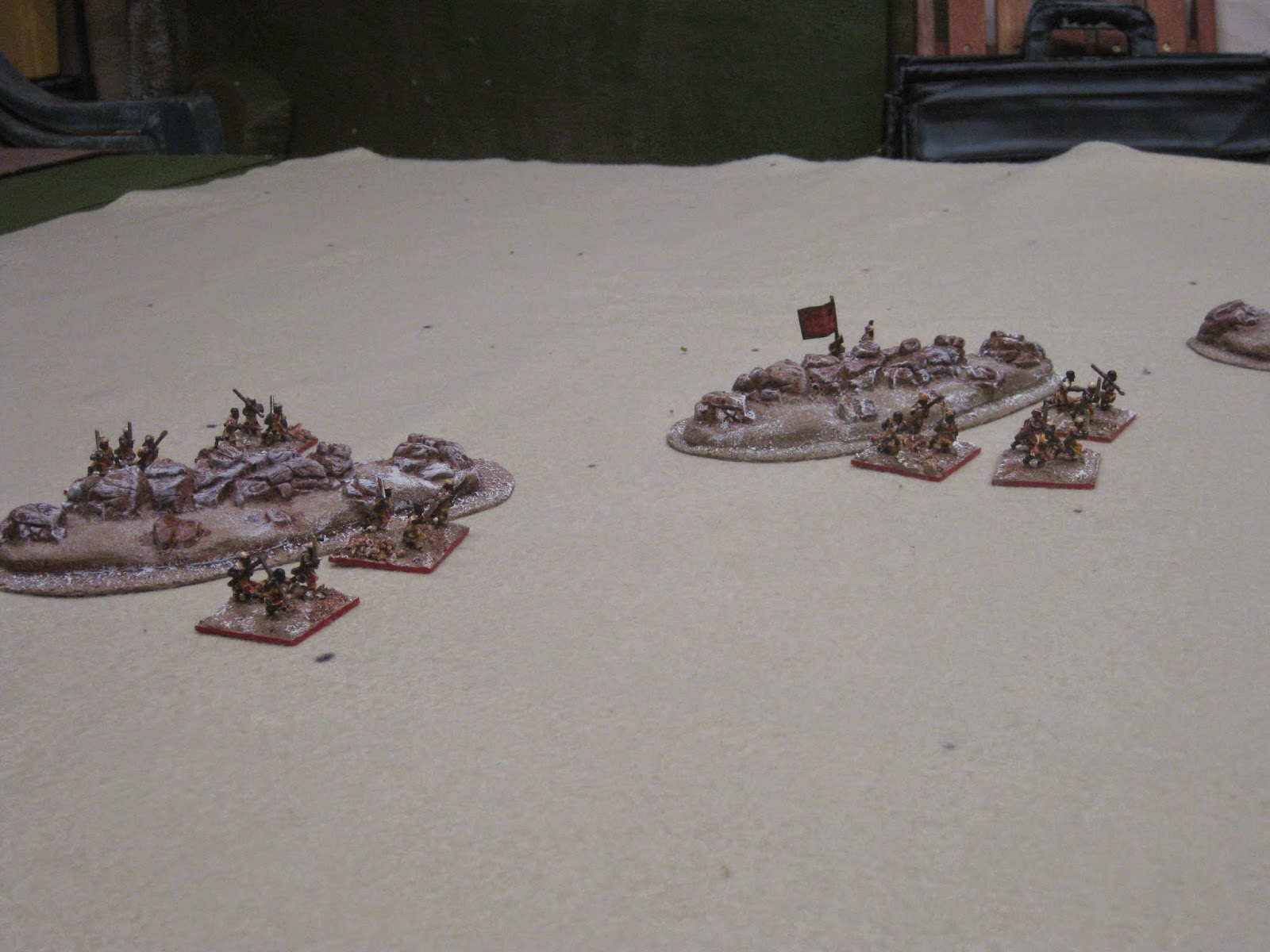 Meanwhile I lurked in the hills. 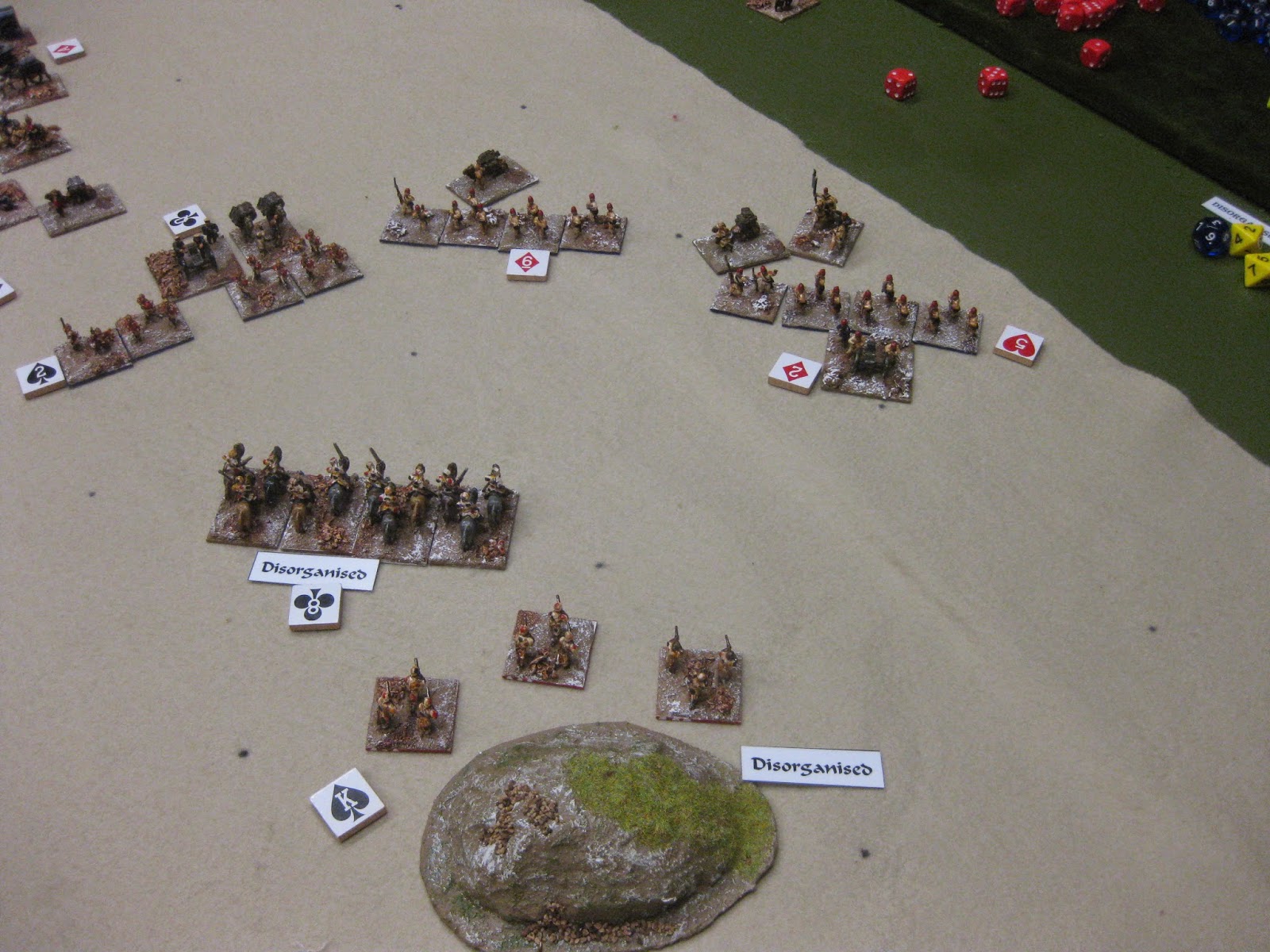 My inability to charge gave Will enough time to deploy and give me some serious volleys. The Egyptians were going through a baptism of fire without turning a hair, it appeared. 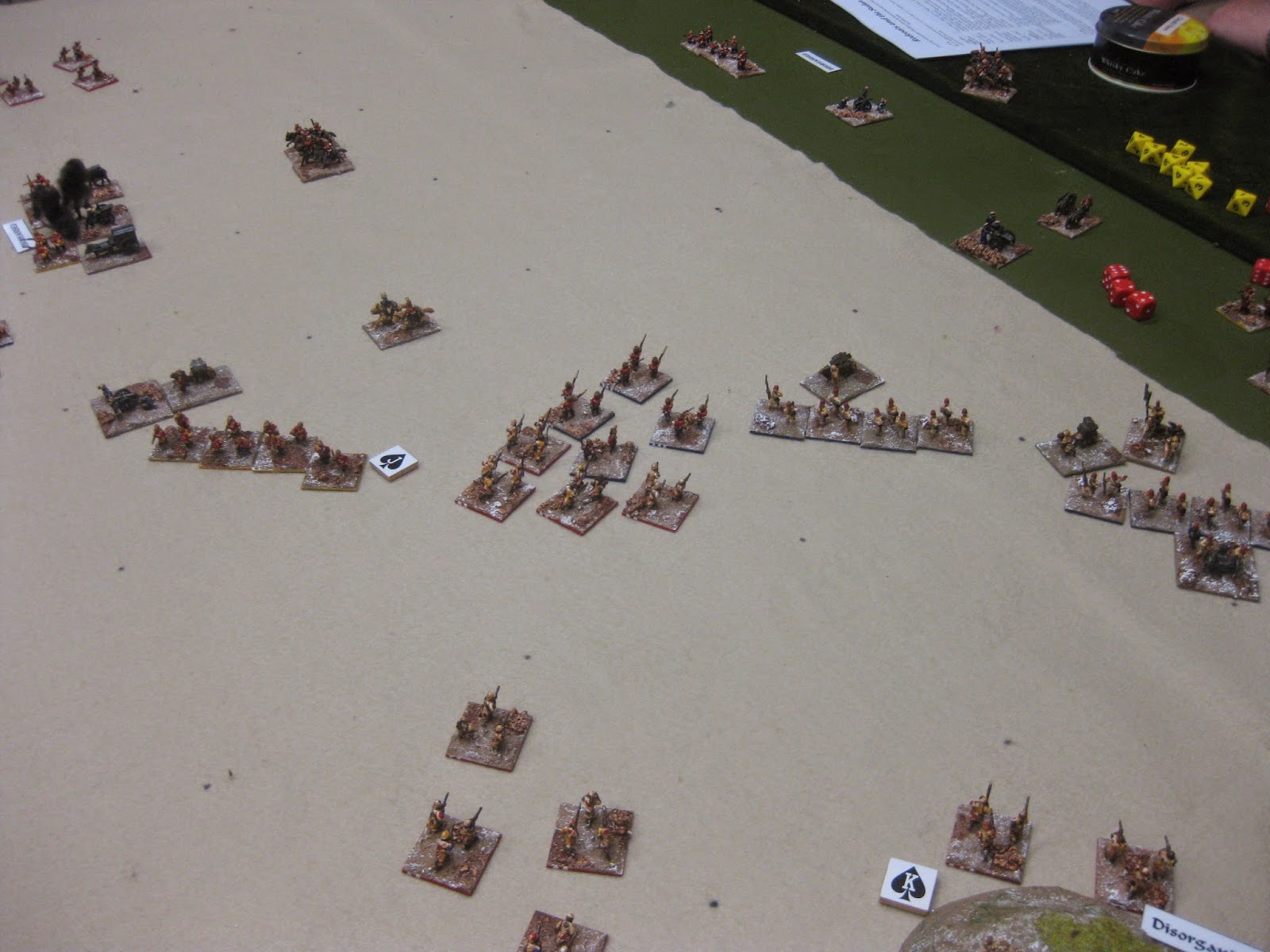 One of his British battalions was not so fortunate. I caught them in the open with a helter-skelter charge. His troops failed to stop me with a volley and we were in, breaking the battalion which rapidly retired to the edge of the board. I hacked his baggage camels up and slaughtered the crew of the Gardner Gun. 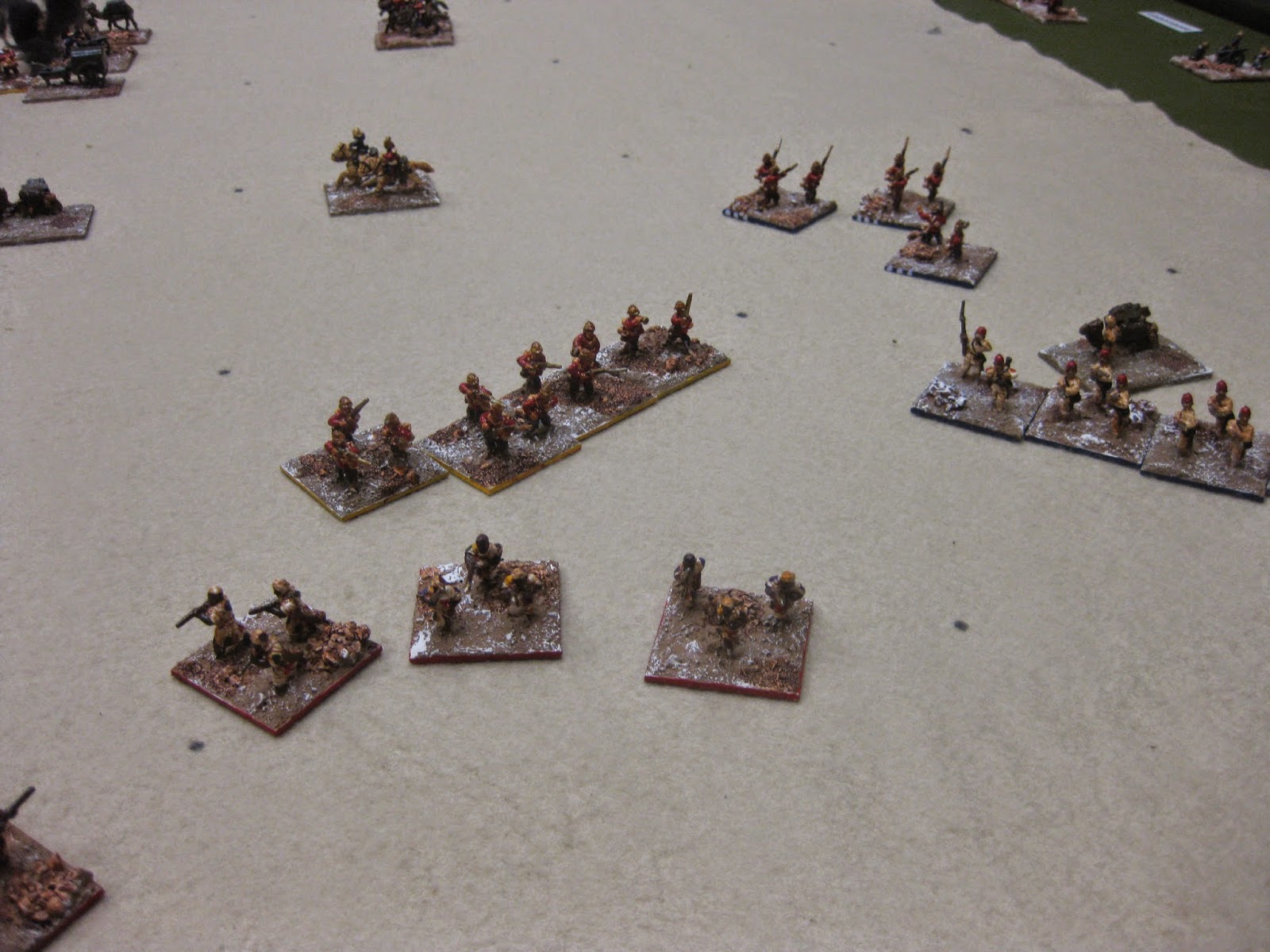 My joy was short lived as the neighbouring battalion smartly turned to its flank and charged me with the bayonet, driving my Ansar off. 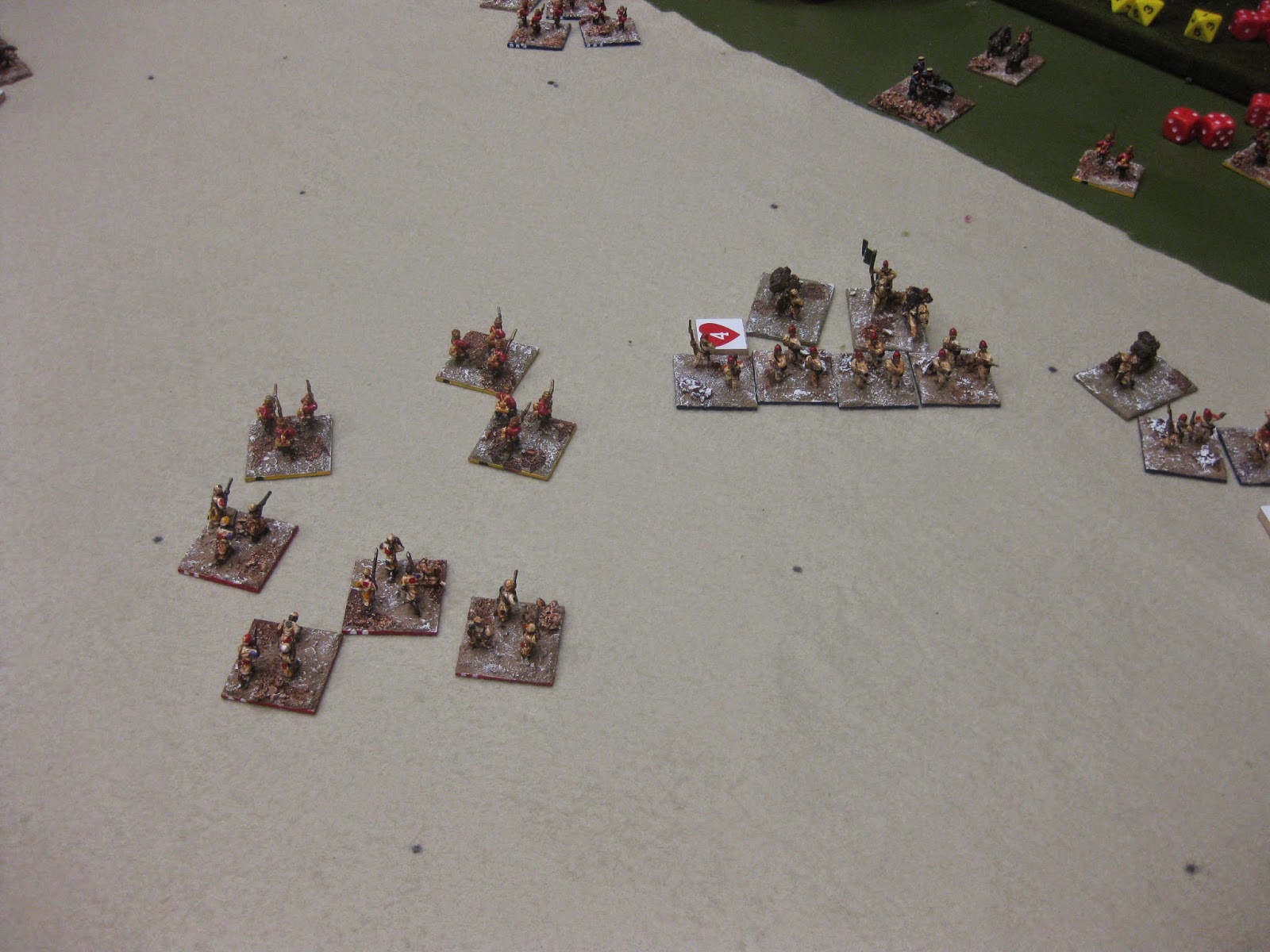 However I was then able to charge them, and encourage them to take a trip to their base line. They were saved by the steadfastness of the Egyptian foot. Oh, the humiliation of it all. 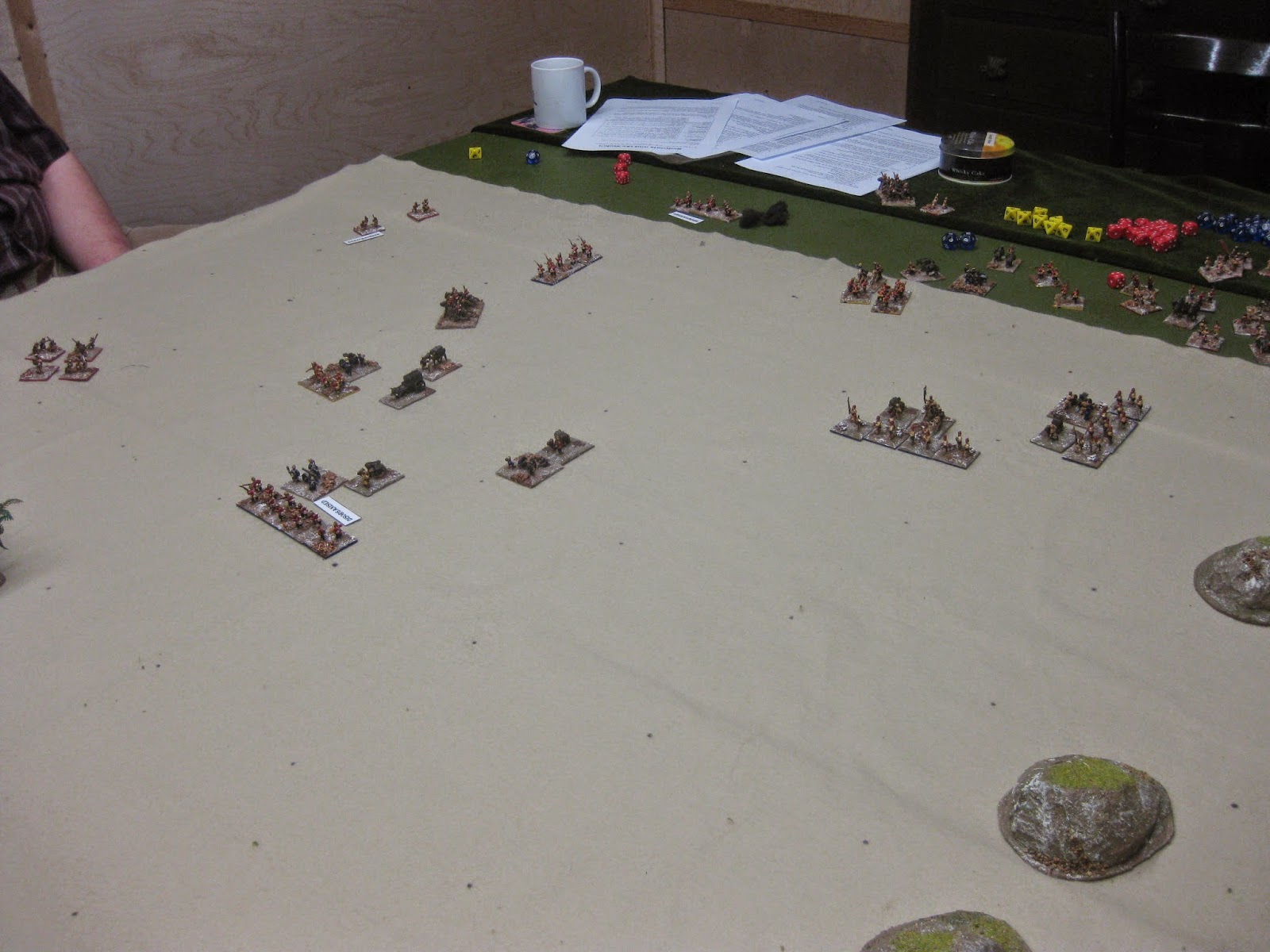 With the aid of the Egyptians the Imperial forces managed to clear the first wave of Mahdist attacks, but leaving their forces scattered across the desert. 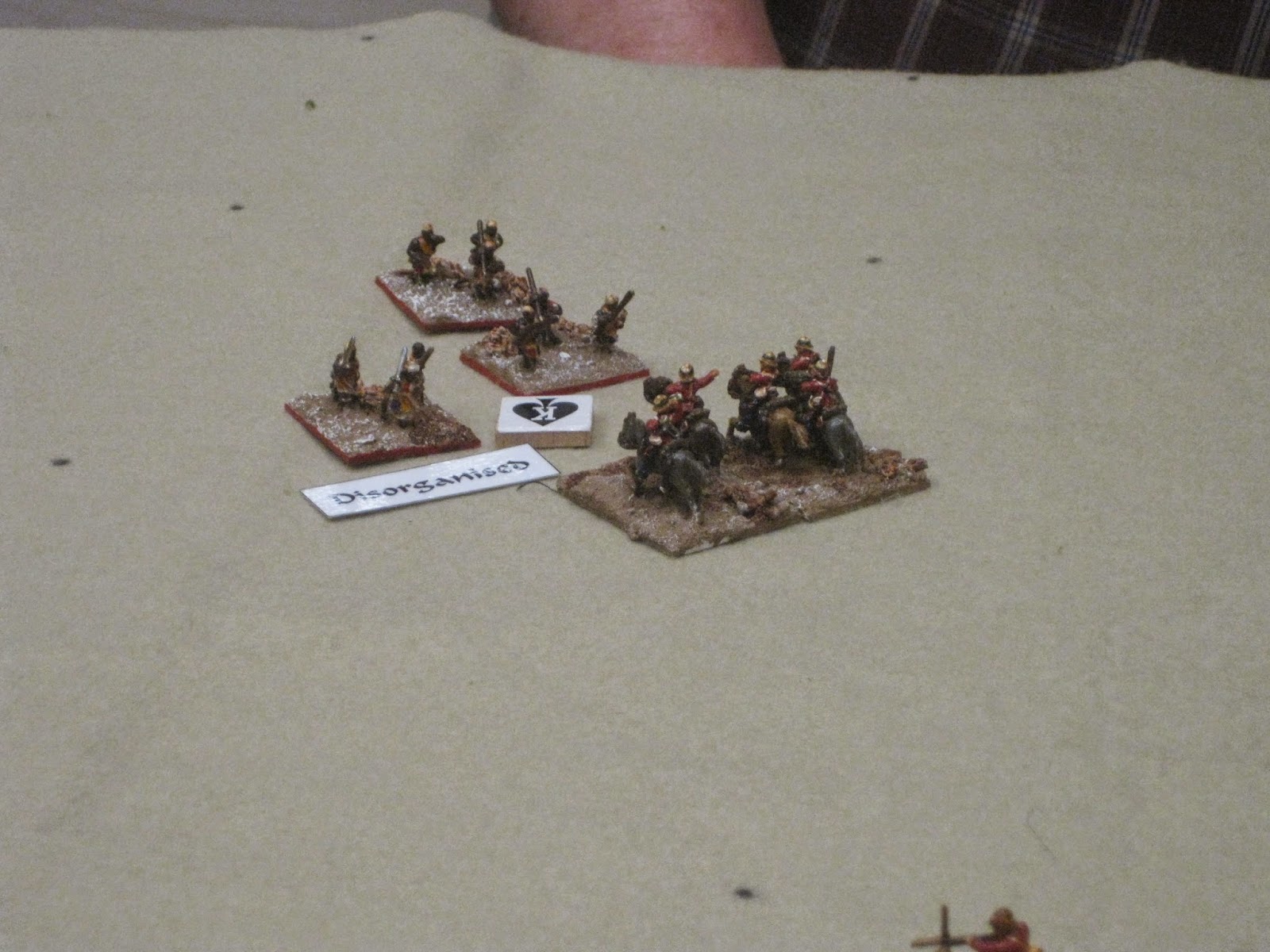 In order to restore a bit of British pride the cavalry launched a charge at some disorganised Mahdists, 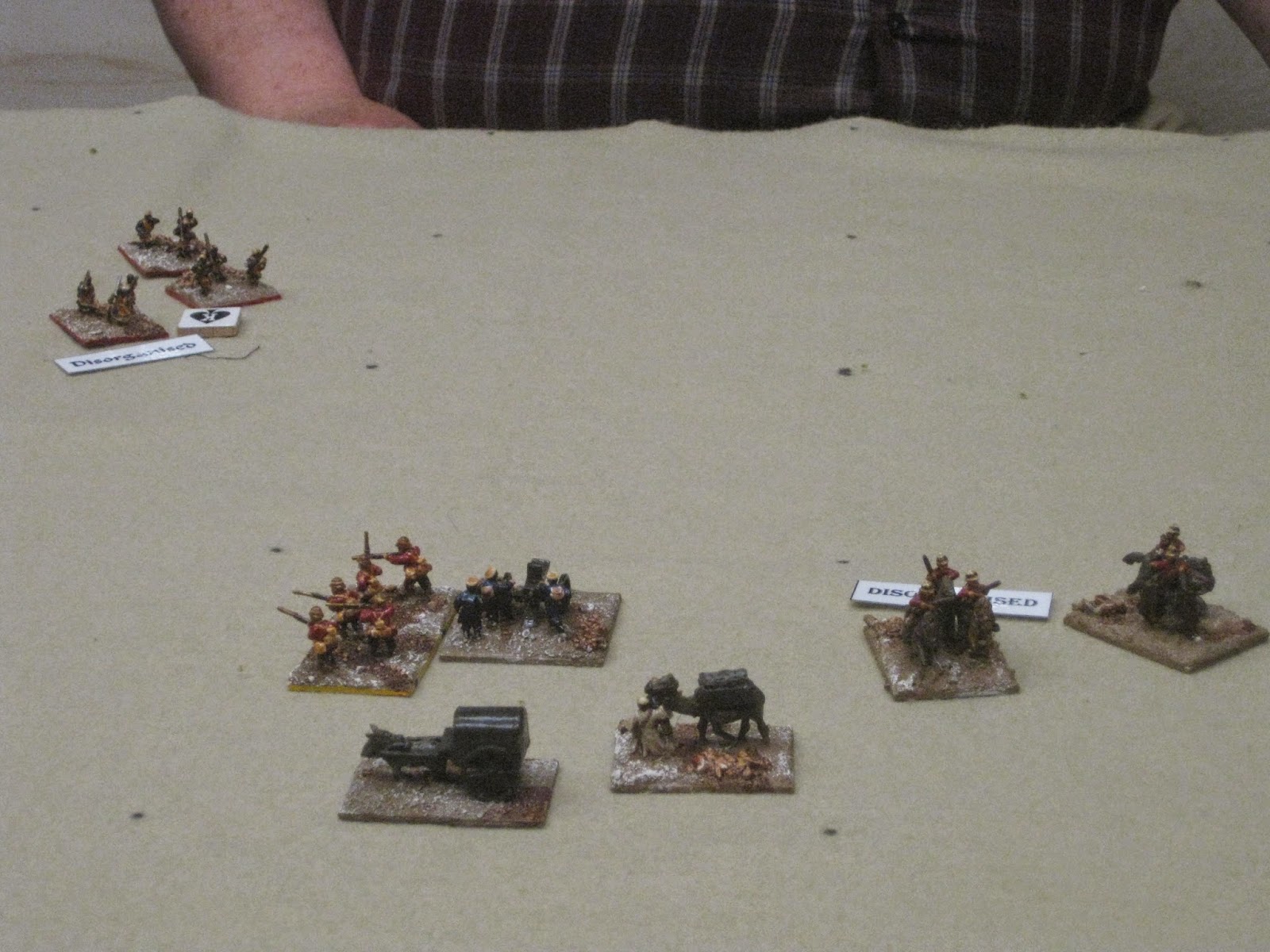 ..only to find themselves beaten off and needing to retire to reform. 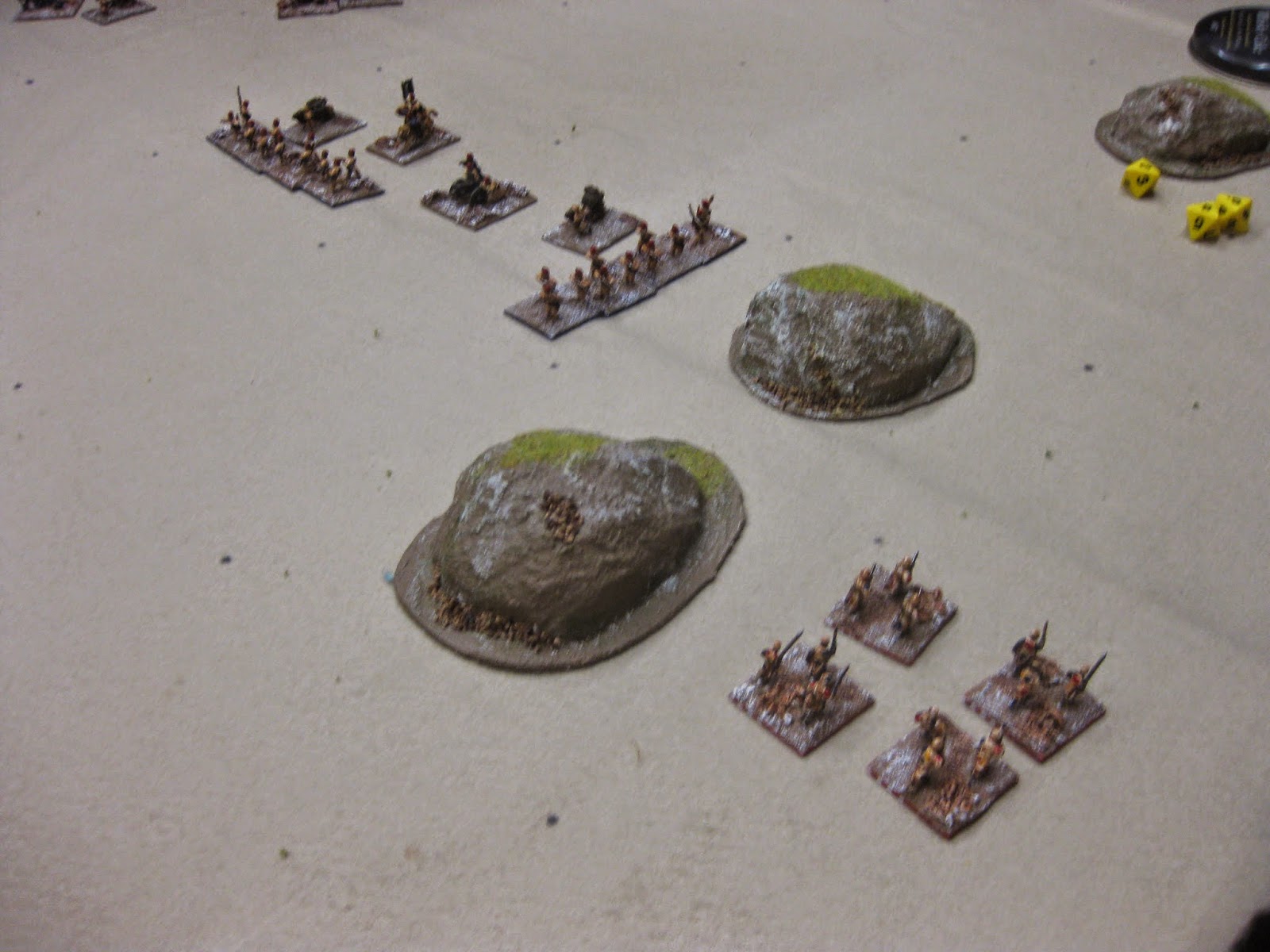 Meanwhile the second wave was sneaking up behind the hills again. 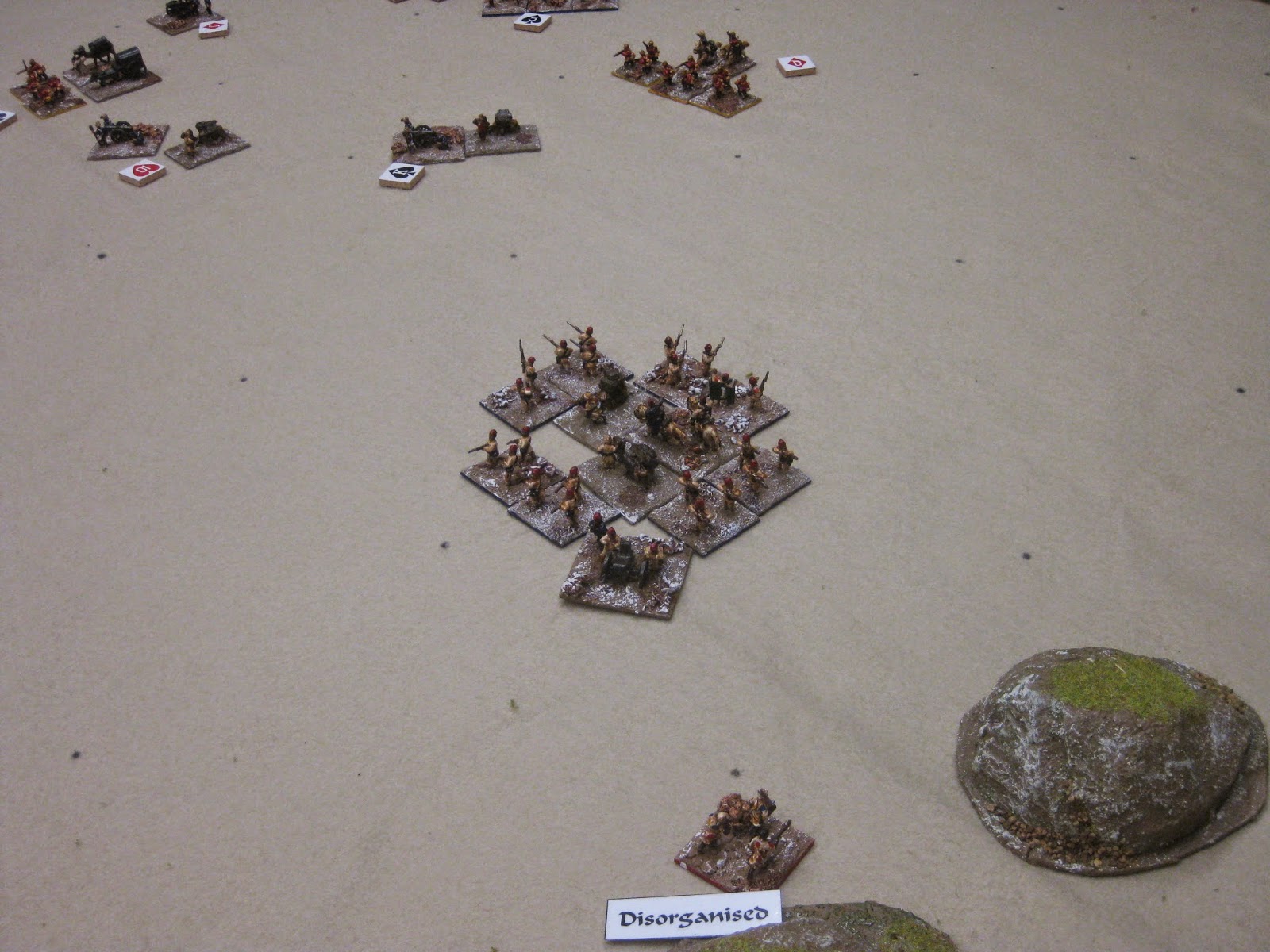 The Egyptians smartly formed into a brigade square and awaited the attack. 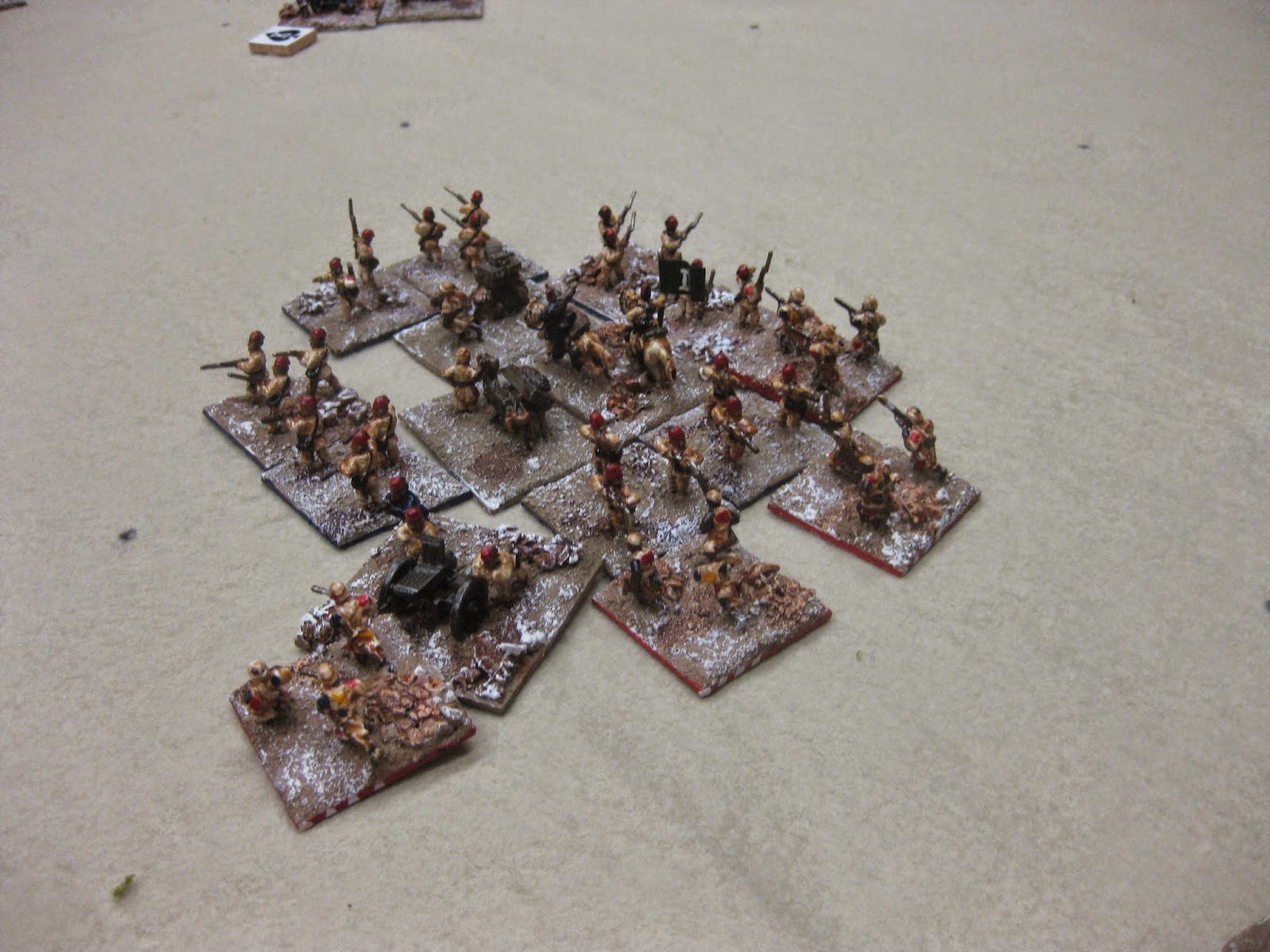 This duly came, but the Egyptians refused to be cowed and drove them off. 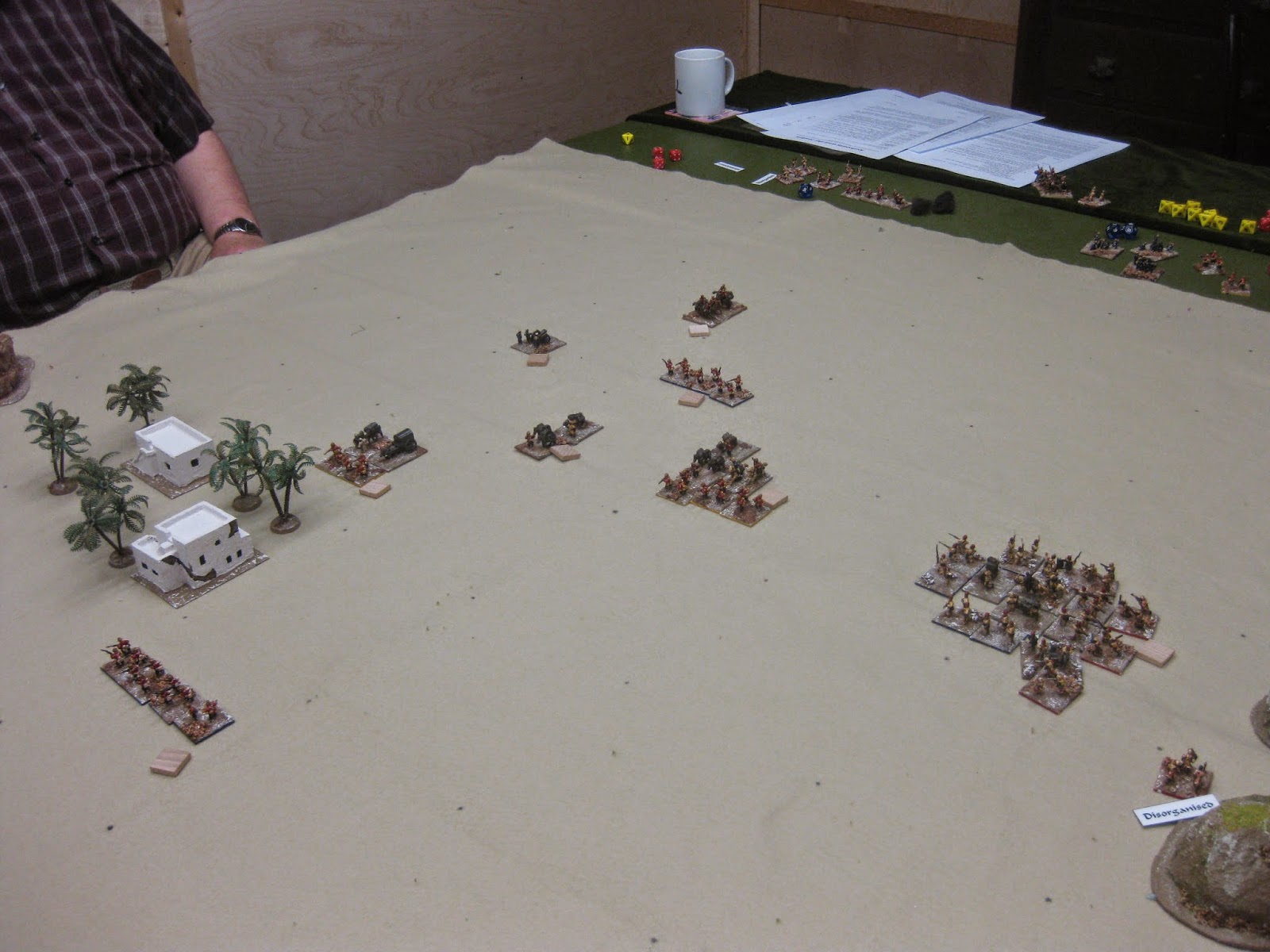 The British were now up and past the first objective, and despite the few shocks they had received in the early stages of the battle still didn't feel the need to be in a square. 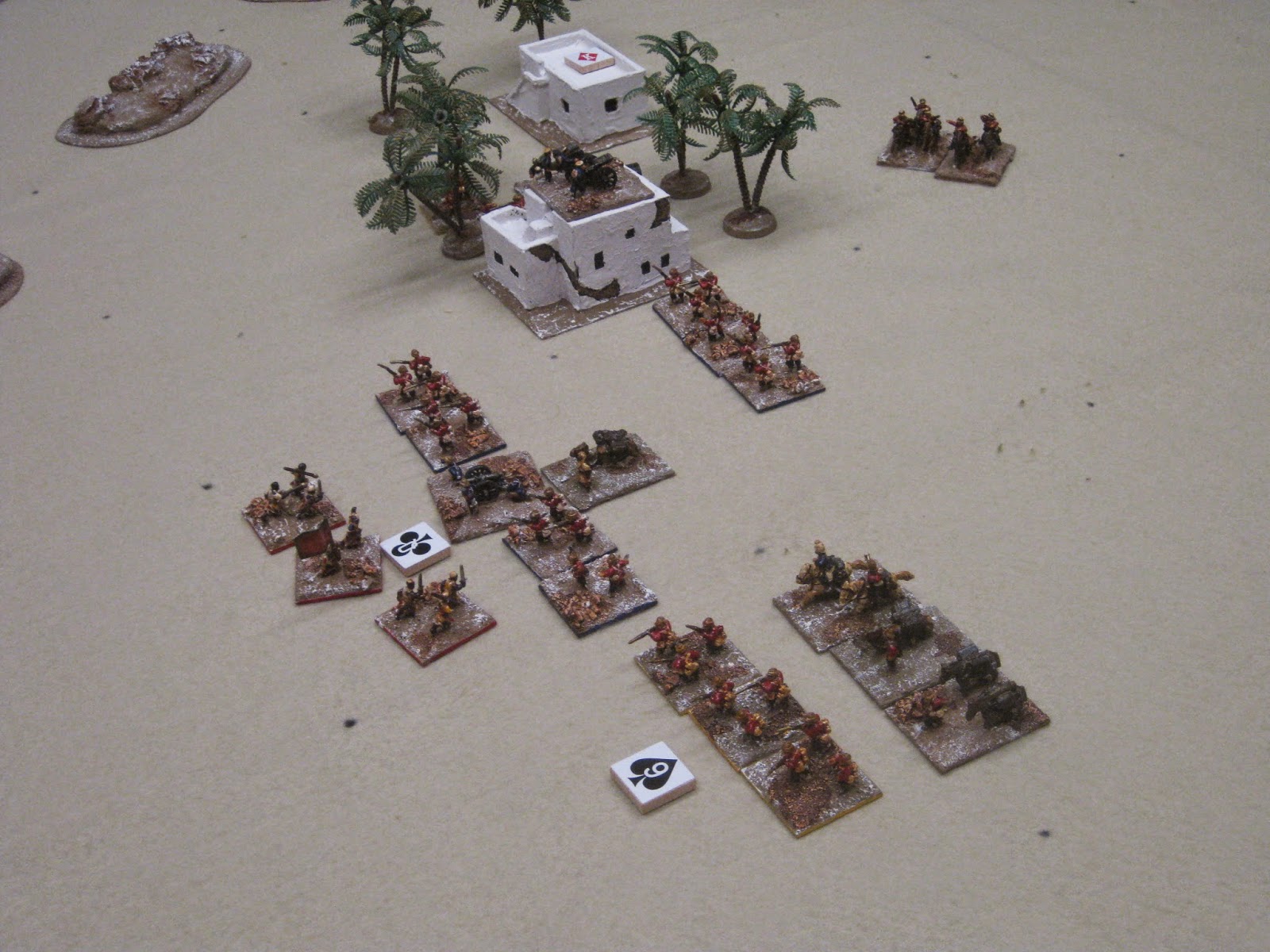 The confidence proved to be well founded as a last despairing charge was easily dealt with, and the remnants of the Ansar retired from the field.

Another satisfactory playtest of the system. There's a need for a few modifications still. The Dervishes need to be able to fire at a slightly greater range than currently allowed, and I'm not sure about the cavalry momentum rule. The system may well play more satisfactorily as a solo game, but Will was polite enough to say he enjoyed himself.

Email ThisBlogThis!Share to TwitterShare to FacebookShare to Pinterest
Labels: Redcoats and the Sudan, wargaming, wargaming in sheds