Cannae Have Another Go, Please?

So, apparently there's this new set of rules out called DBA 3.0. As part of the "buzz" around the product there will be a publication showing the rules being used to re-fight "Great Battles of History". There'll be 12 battles, each re-fought and written up by a different person.

Although I've had little to do on DBA 3.0 so far I got asked to take part in the exercise because (a) I know people who are, (b) I have a track record of doing re-fights, (c) I have the armies in 20mm plastic which is different and finally (d) it's hard to get the number of volunteers for these things sometimes.

The initial discussion was whether I could do a Biblical era battle, - all those Assyrians and so on - but when I looked at the list of battles there was a glaring omission. No one was doing a Hannibal game. Phil has a theory for this, - mainly that the Republican Romans and Late Carthaginians suck as DBA armies, so no one has them.

Well, I've got the kit, as everyone who reads this knows, so it was obvious to fill the gap. I've done Cannae a few times before, and even written an AMW game up in Slingshot a few years ago.

Cannae fascinates me. I mean it is agreed that it's Hannibal's Austerlitz. It's his high point, a battle of such tactical genius that it almost defies belief that it happened. Wiping out an army 50% bigger than his own.

I have a problem with this. I think that Hannibal damn near lost it, and against a smarter Roman general he would have done. He relies heavily on Roman predictability and shows a cynical disregard for his troops. His casualties are not inconsiderable and on a par with those typically suffered by Pyrrhus. Finally he completely fails to exploit the win. It has to be said that Phil and other Monday Night-ers do not agree with me, and can come up with good reasons why I'm wrong.

The other difficulty is that we have one source, - Polybius (all Livy's military details are taken from Polybius). Whilst he is as good an ancient historian as they get he has political issues to do with his patron and he is trying to explain how Rome nearly fell and how it survived. His narrative has to be read with that in mind (he can't criticise Paullus, for example, as he's from the same family as his patron). Modern writers on the battle shed some light on the subject, - Sabin's analysis in "Lost Battles" is good and he is fairly scathing about some aspects of Goldsworthy's book on Cannae. In re-reading all of my books I was really struck with Peter Connolly's analysis, which is well worth a look if you haven't read it.

Any how, I agreed with Phil that we'd give it a try out, based on Polybius mainly and trying to keep as close to DBA 3.0 as possible. 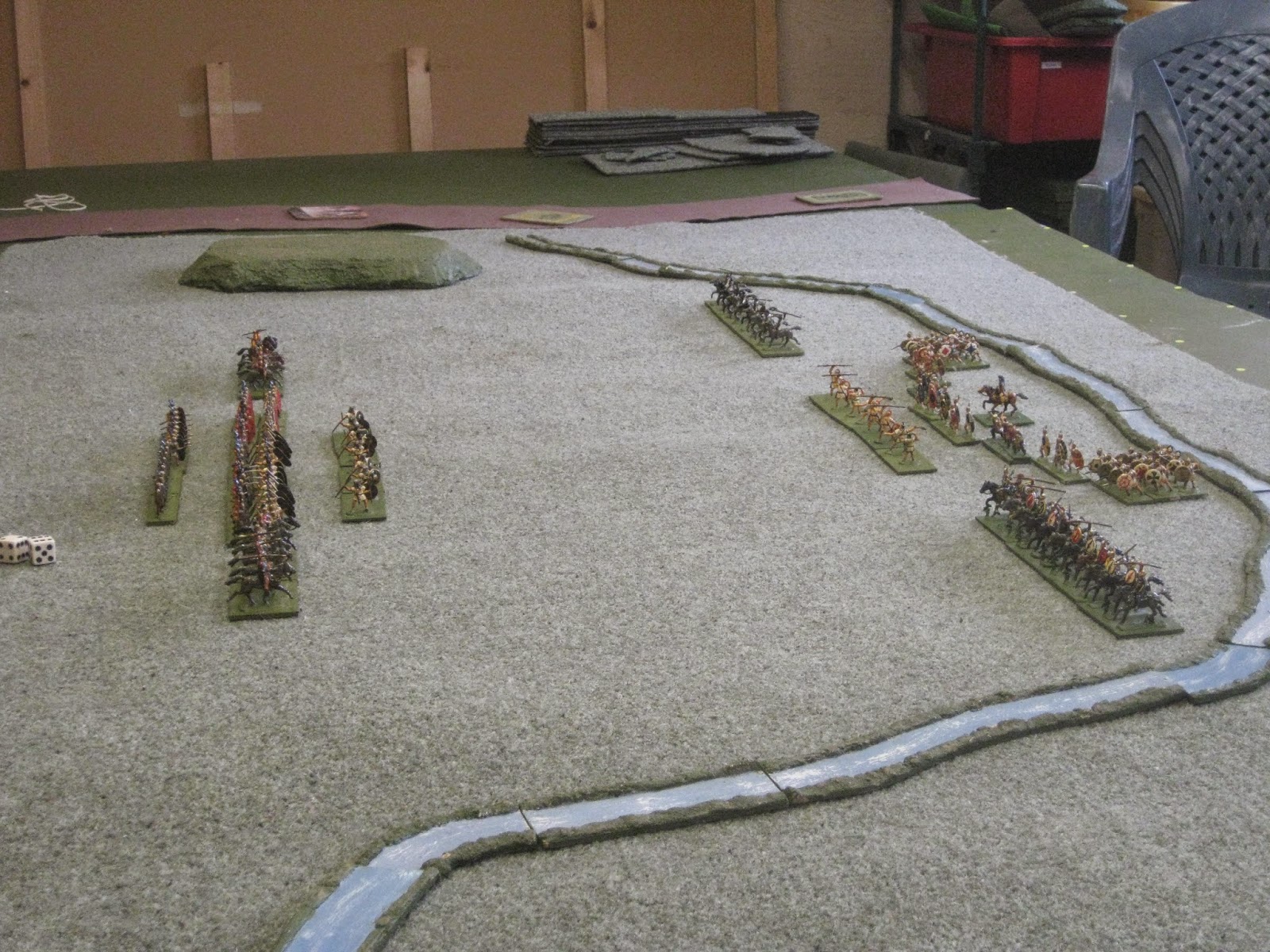 The initial decision is to determine how many elements to be used. I ignored the advice for re-fighting battles using one element = 500 men as the Romans had about 80,000 infantry at the battle and I simply don't have enough toys. As the Romans used two consular armies it seemed sensible to use two DBA armies for them.

Hannibal's army is smaller so the initial reaction is to give them fewer bases. However DBA takes no account of troop quality, by and large, and it is clear Hannibal's troops were of better quality by a margin. Using Phil Sabin's ideas around fighting value the important thing is the effectiveness of the army, not the physical numbers. Cannae is a hard fought battle. The Romans do a lot of damage and came close to winning, so having parity between the two armies on the table has a logic to it. Thus Hannibal gets 24 elements as well.

Next, commands. The Romans are easy. Split down the middle, half and half, with Varro on the left and Paullus on the right, each with as a cavalry command base. I gave Paullus the higher of the PIP dice. I also required the first PIP of each commander each turn be used to move the infantry in the centre towards the nearest infantry contact.

Hannibal is a bit more of an issue. In the end I split the army in two the other way. Hasdrubal is on the left and I gave him command of the left wing cavalry, the line of skirmishers and the right wing light horse. The rule in DBA 3.0 that allows a 20 base width command distance to light horse makes this possible. We also know that the psiloi eventually went to support the cavalry wings, so it makes sense. Hasdrubal got a cavalry command base on the inside on the left wing so he can  use his command range effectively.

That gives Hannibal the centre of six Celtic/Spanish auxilia and six African spears. I had Hannibal as a free floating figure and allowed him to join any base when he wanted (4BW move) and relocate if required. I didn't want him tied to anything and felt he should be given something special in the game 'cos, like, well, he's Hannibal, isn't he? He also gets to roll two PIP dice and chose who gets which die each turn*.

The deployment is based on Goldsworthy's "Roman Warfare" because I like the map.

Oh, and no camps because they are irrelevant in this battle. 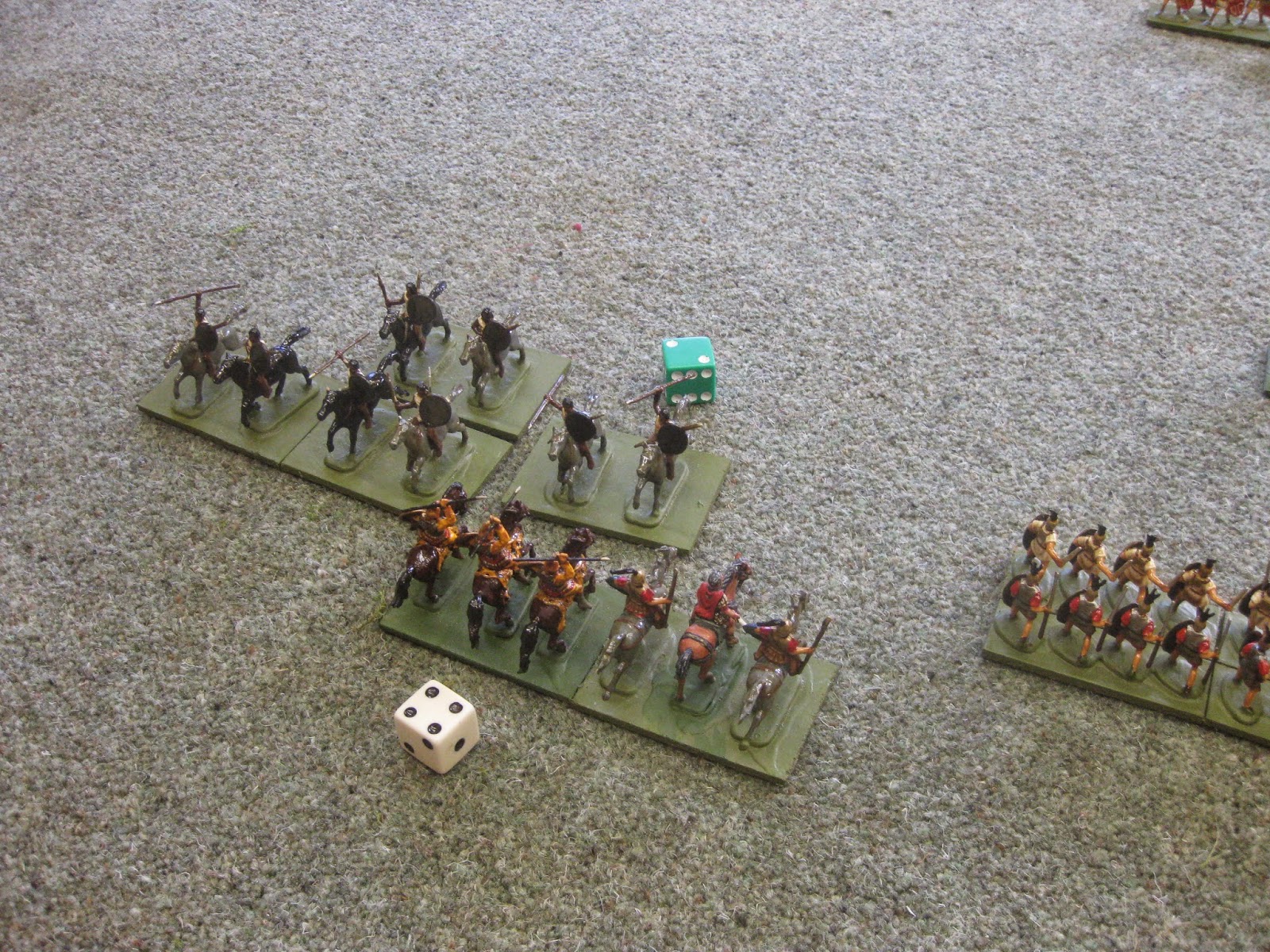 Hannibal went first and typically rolled a 1 on one of his PIP dice. Therefore the centre stayed in place and the cavalry wings got to work. Phil had the Carthaginians, BTW. In my first turn I got reasonable PIPs and got lucky on my left, killing one of the Numidian horse elements. 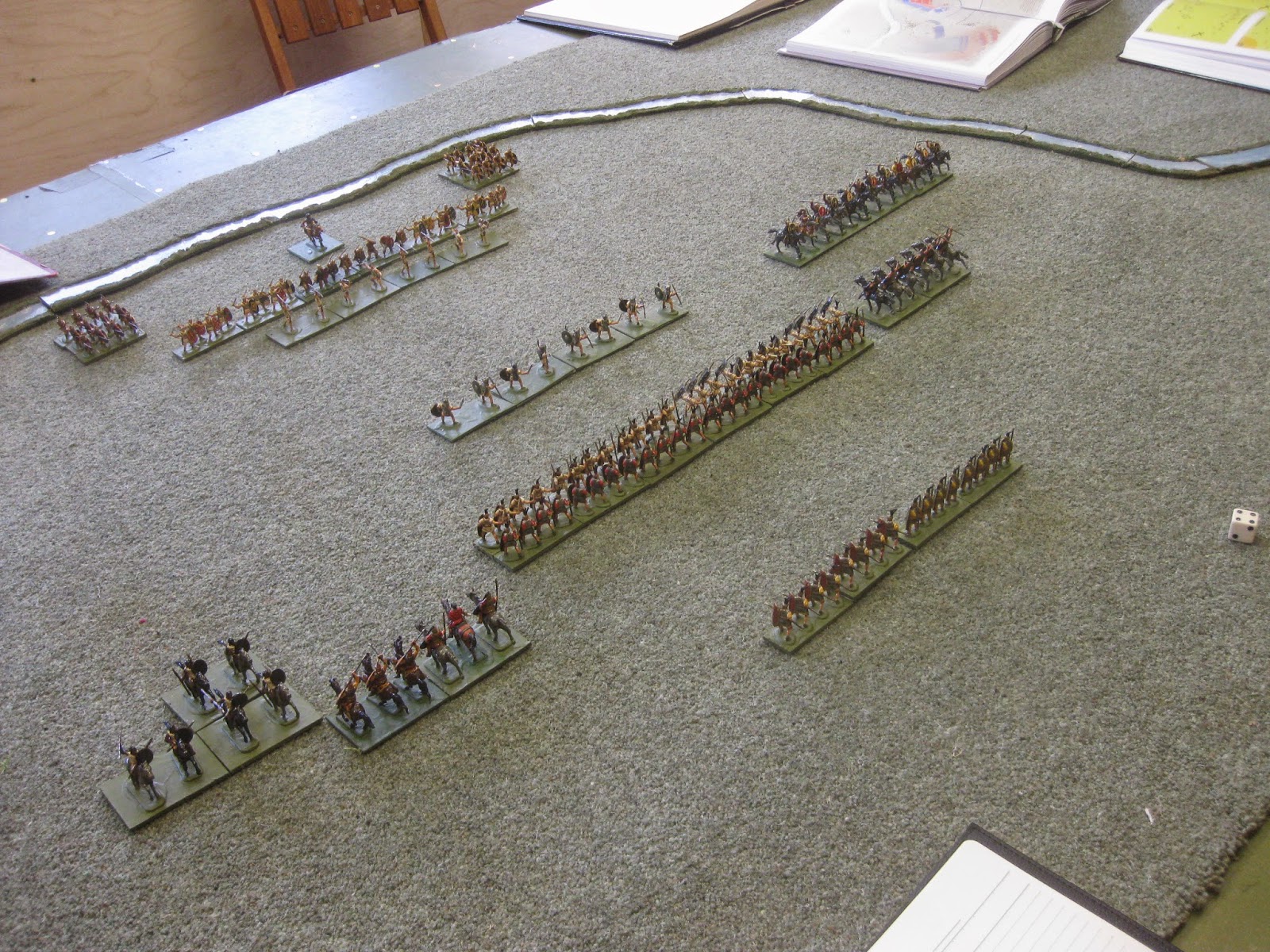 The Triarii are hanging back through lack of PIPs.I think this is a mistake and they should be part of the central group until frontal contact with Hannibal's infantry. I also think there's too much room over by the river. 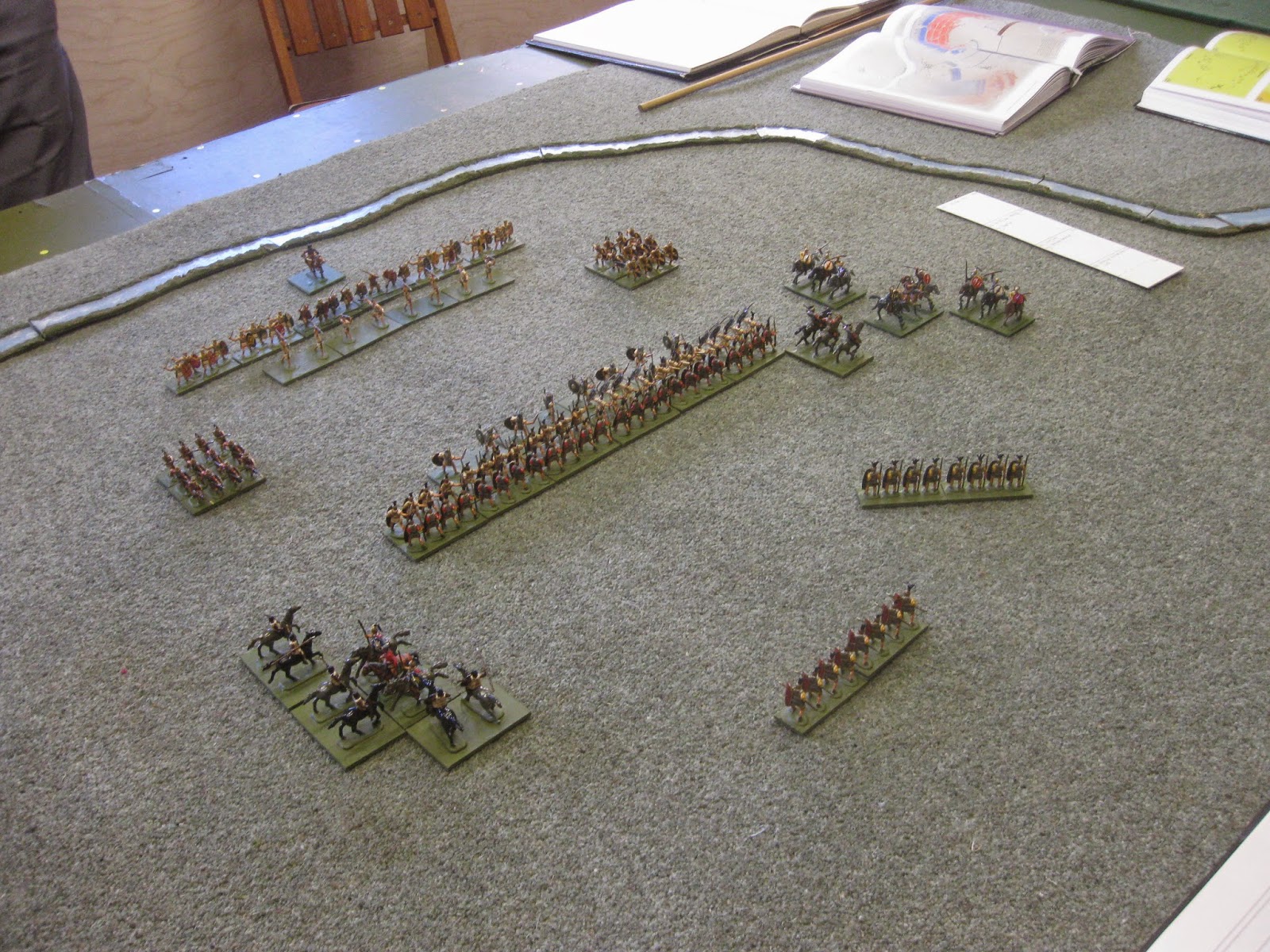 Both the cavalry wings are developing nicely. The Numidians are appropriately slippery and having the extra base is a real advantage. Paullus looks like he's getting the real run around, so I swung some Triarii out to bolster the flank. I shouldn't be allowed to do this. A PIP famine for Hannibal means that his centre is static, but Phil is trying to create the pocket by pushing up his spear columns. 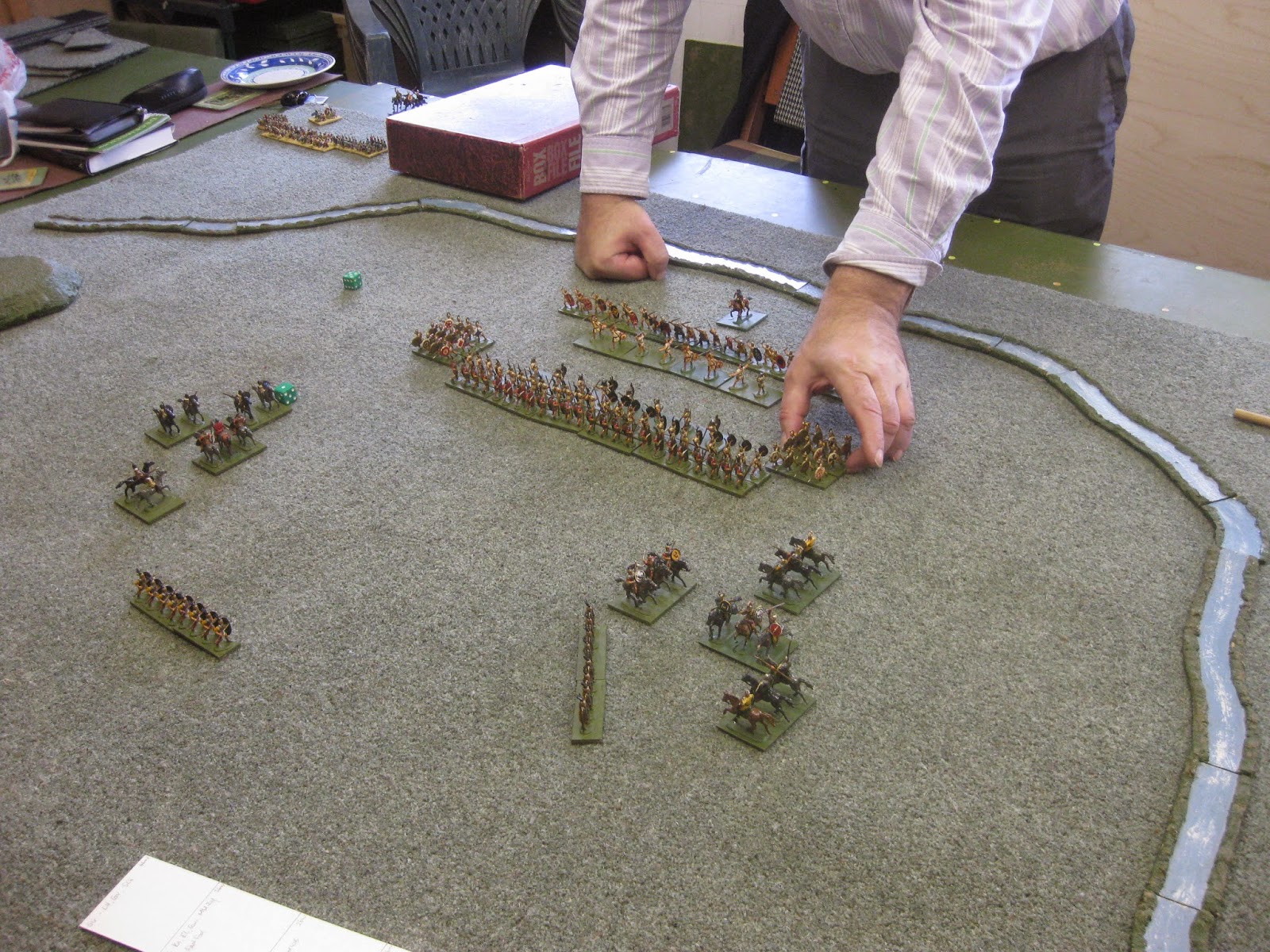 So contrary to the original battle the African spears get into action first. Phil is holding back the Auxilia as he knows that they'll die quickly when the blades hit them and make one recoil due to the resultant overlap. This problem needs fixing for this game. 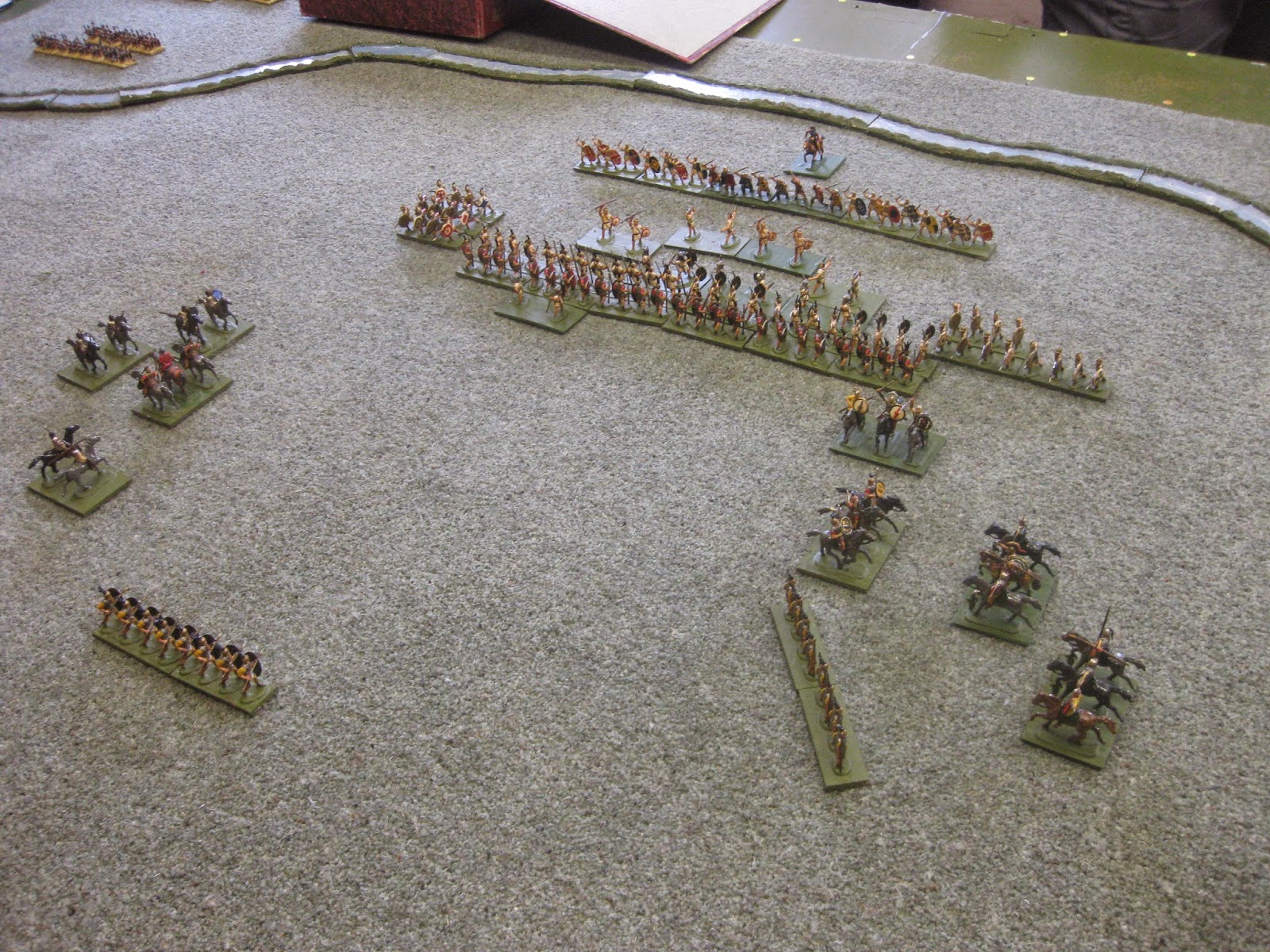 The infantry lines aren't in contact yet. Phil is making me make the first contact. My Triarii are doing a fine job of keeping Hasdrubal at bay. 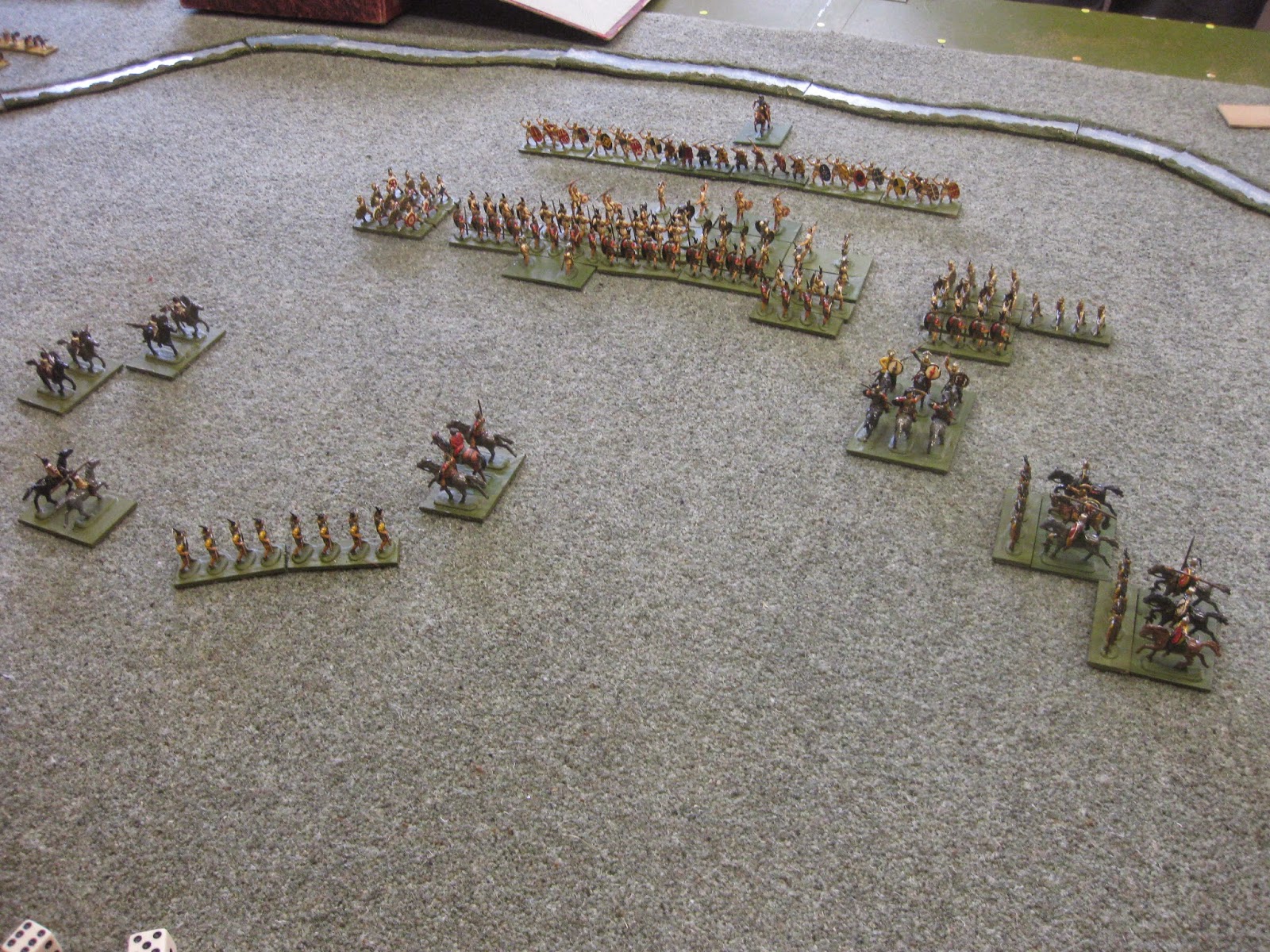 I make contact, and my right hand elements are drawn aside by the slide into contact, splitting my front line. 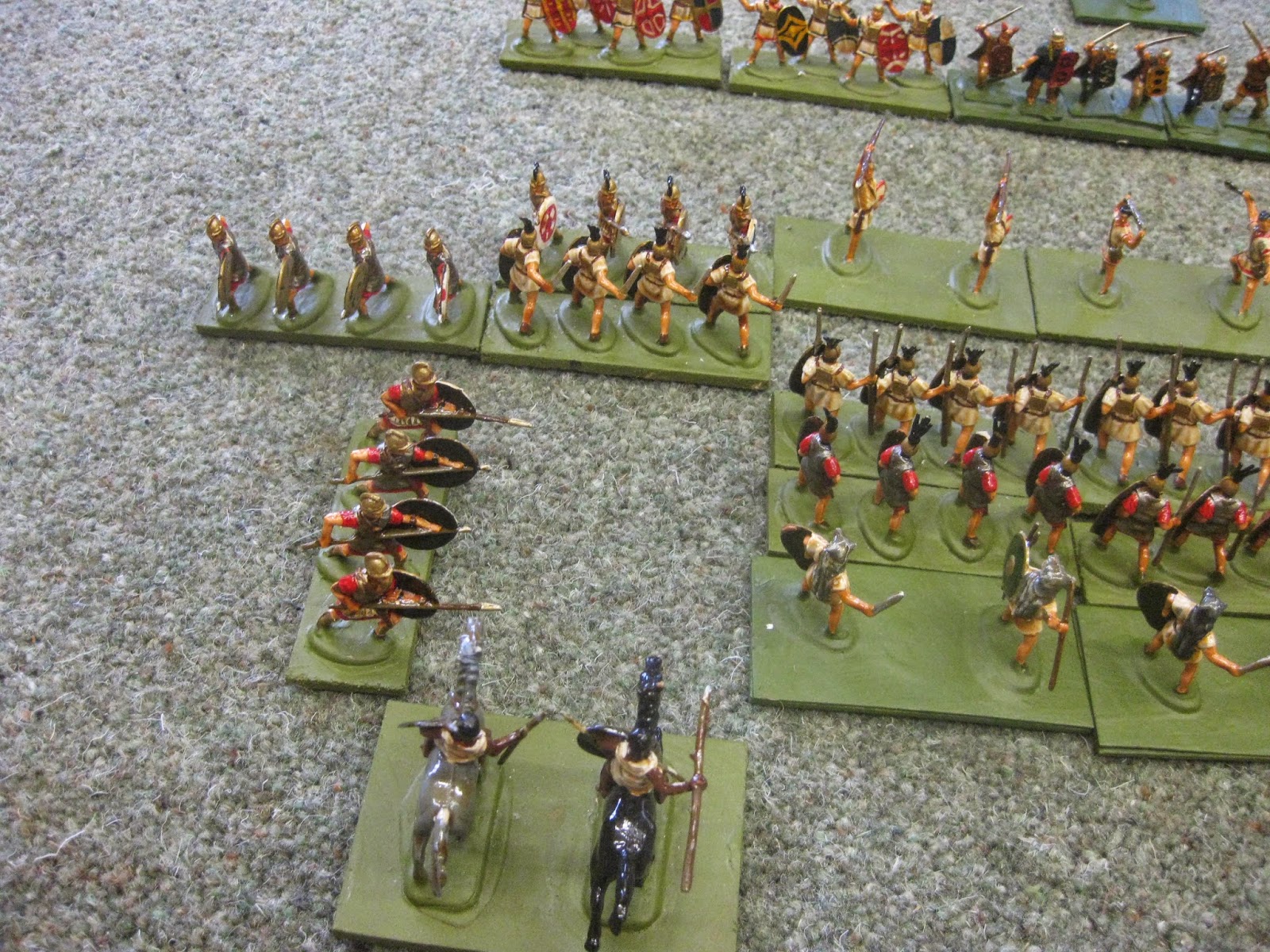 In the next move Phil starts to chew lumps off my left hand foot elements. 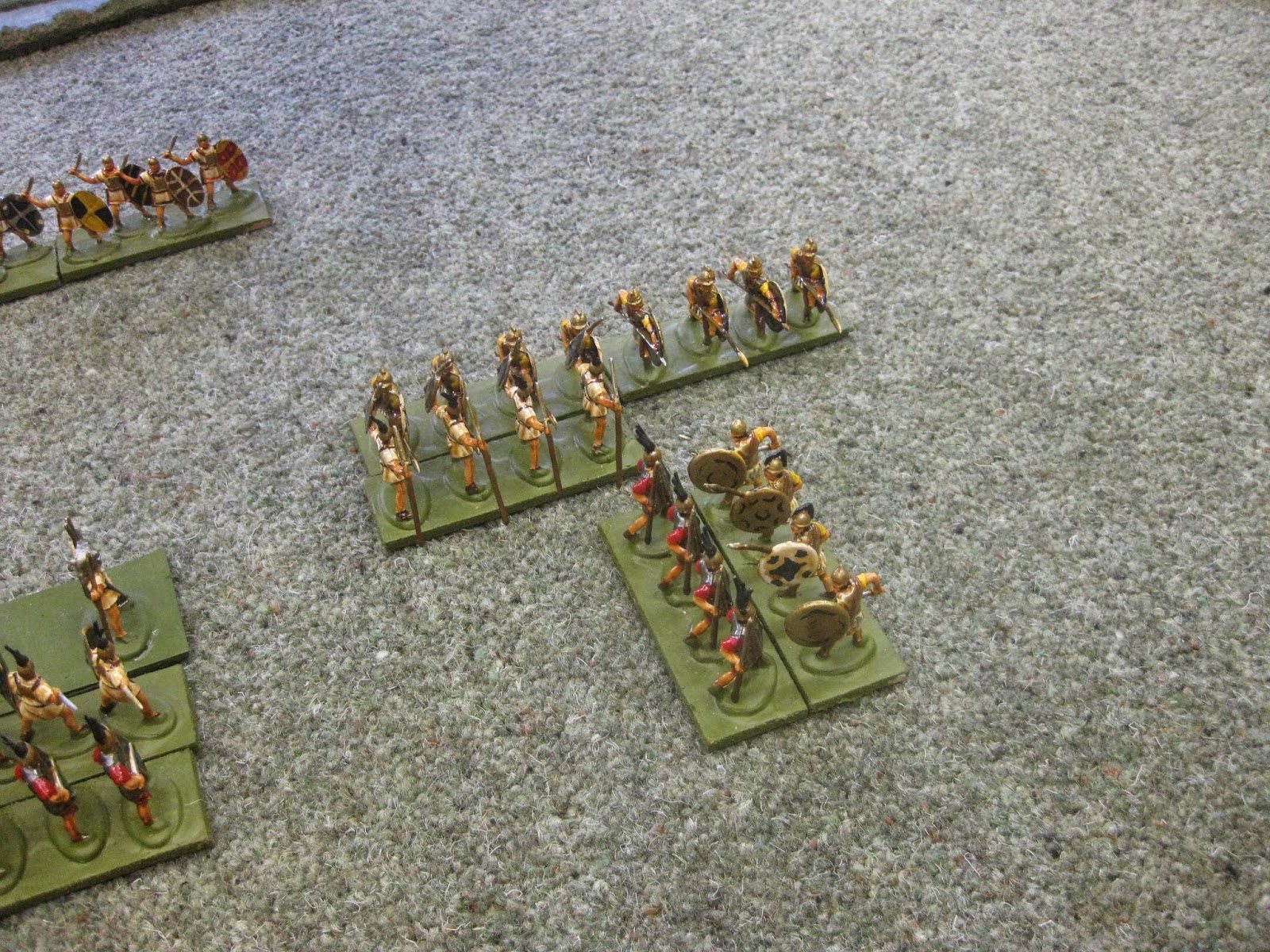 The elements on the right are holding up okay. If I can keep three spears interested with two blades I'm good for now. 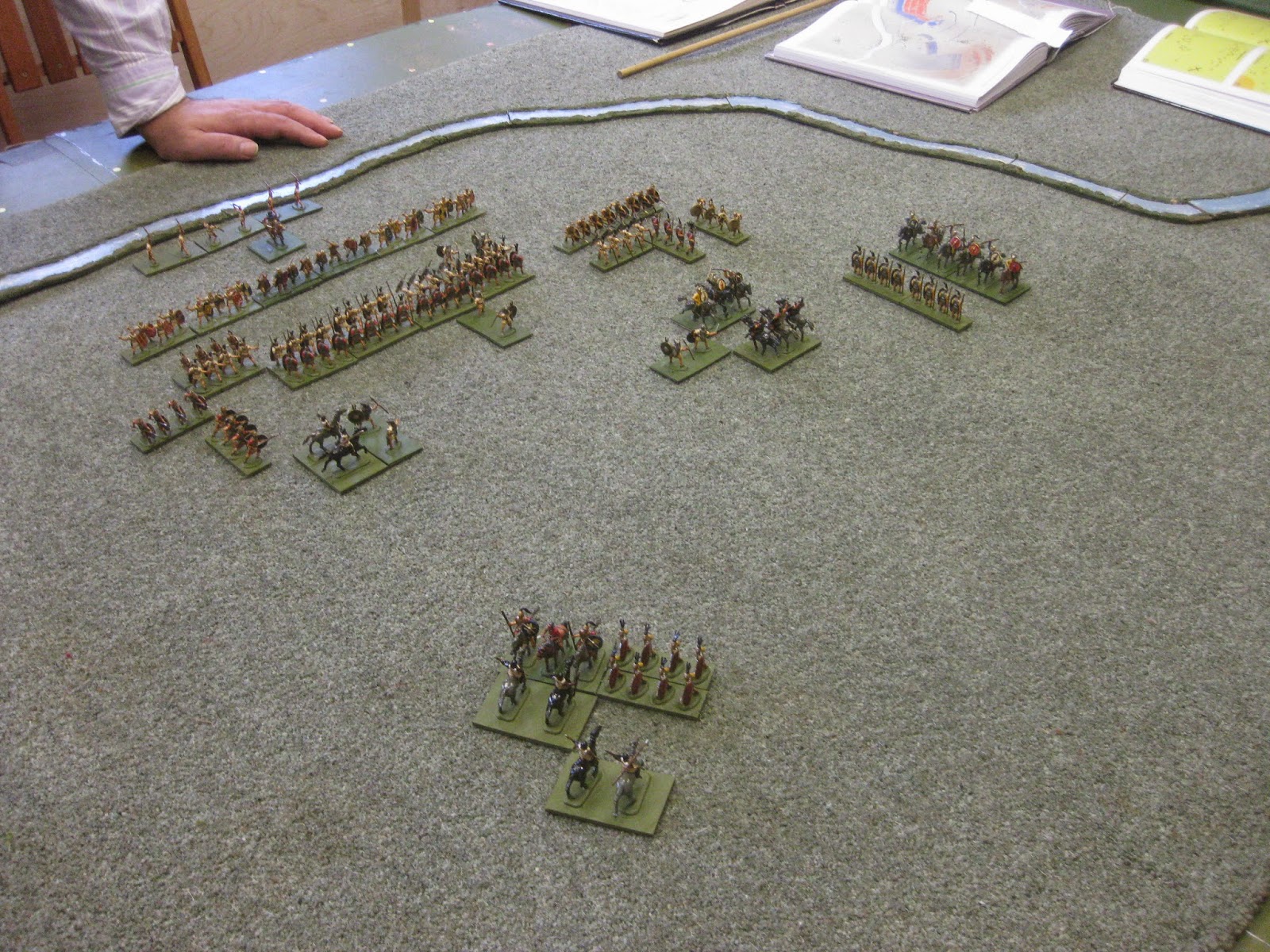 You can see from this shot that apart from one element of Numidians I've done a good job of neutralising the cavalry advantage the Carthaginians have, mainly by using the Triarii. 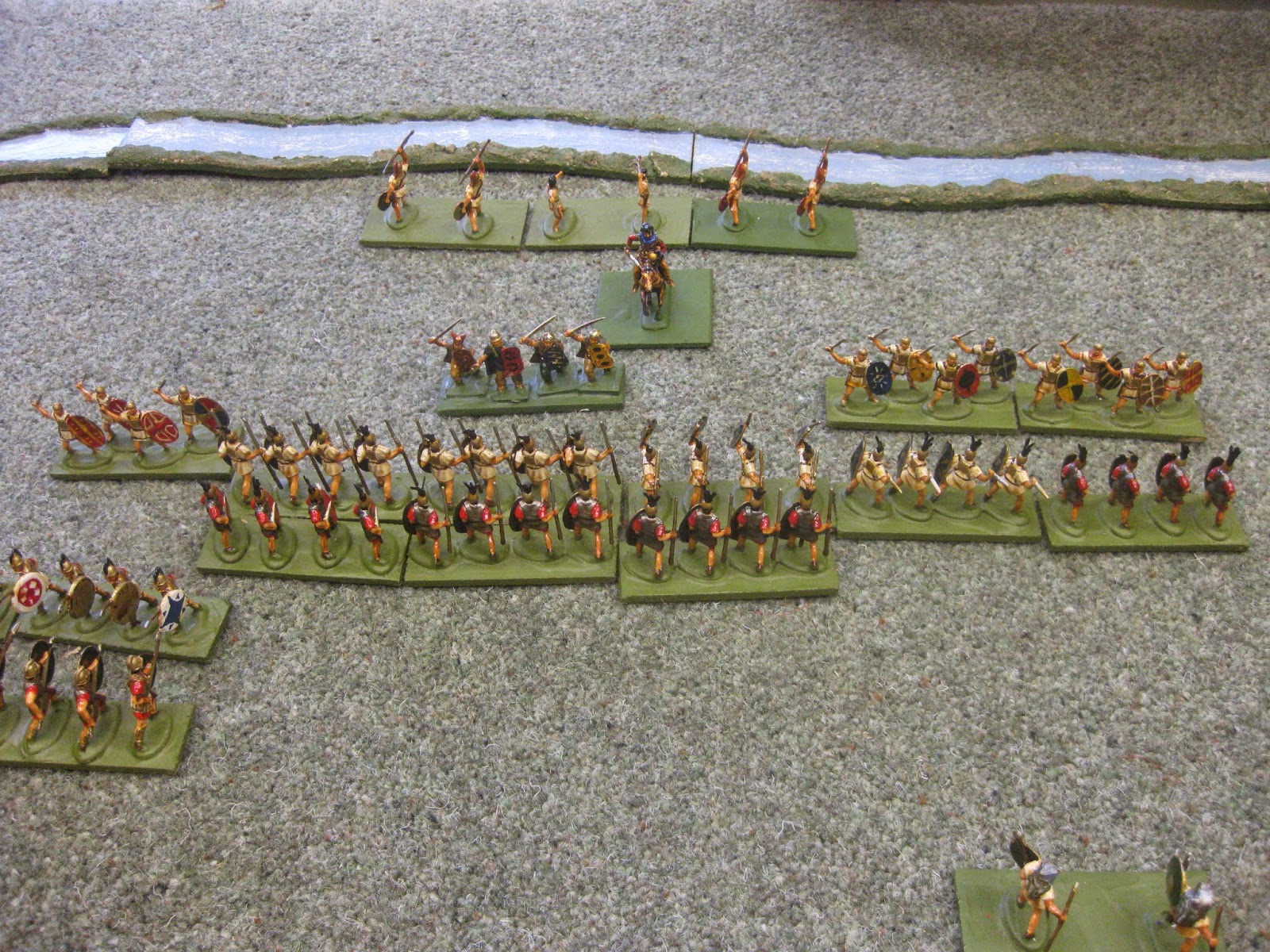 Finally I hit the Auxilia in the centre, and sure enough they start to die in droves. At this point we're at about six kills each, looking for eight. 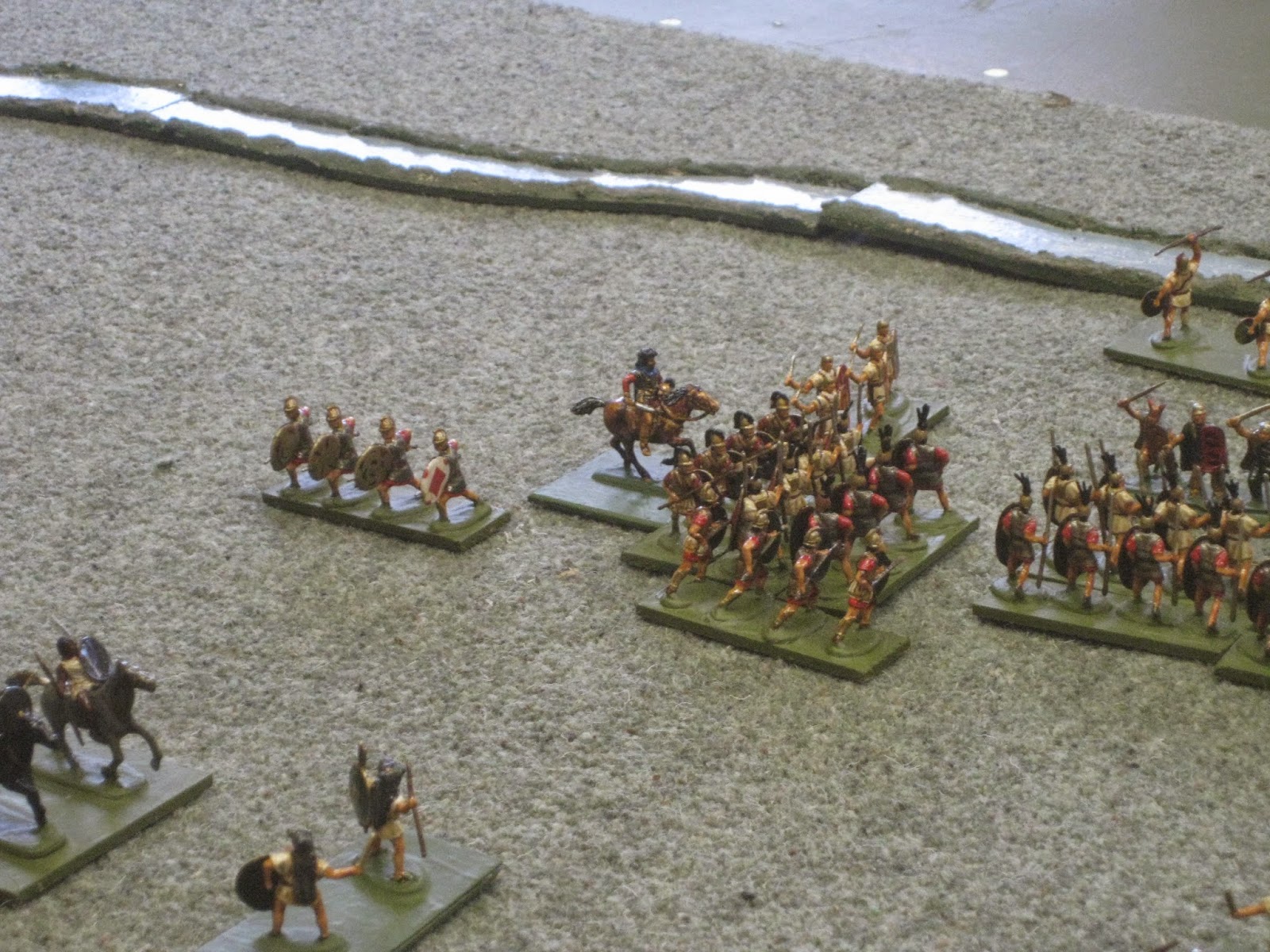 Hannibal finally takes the plunge and joins up with his right hand Africans. 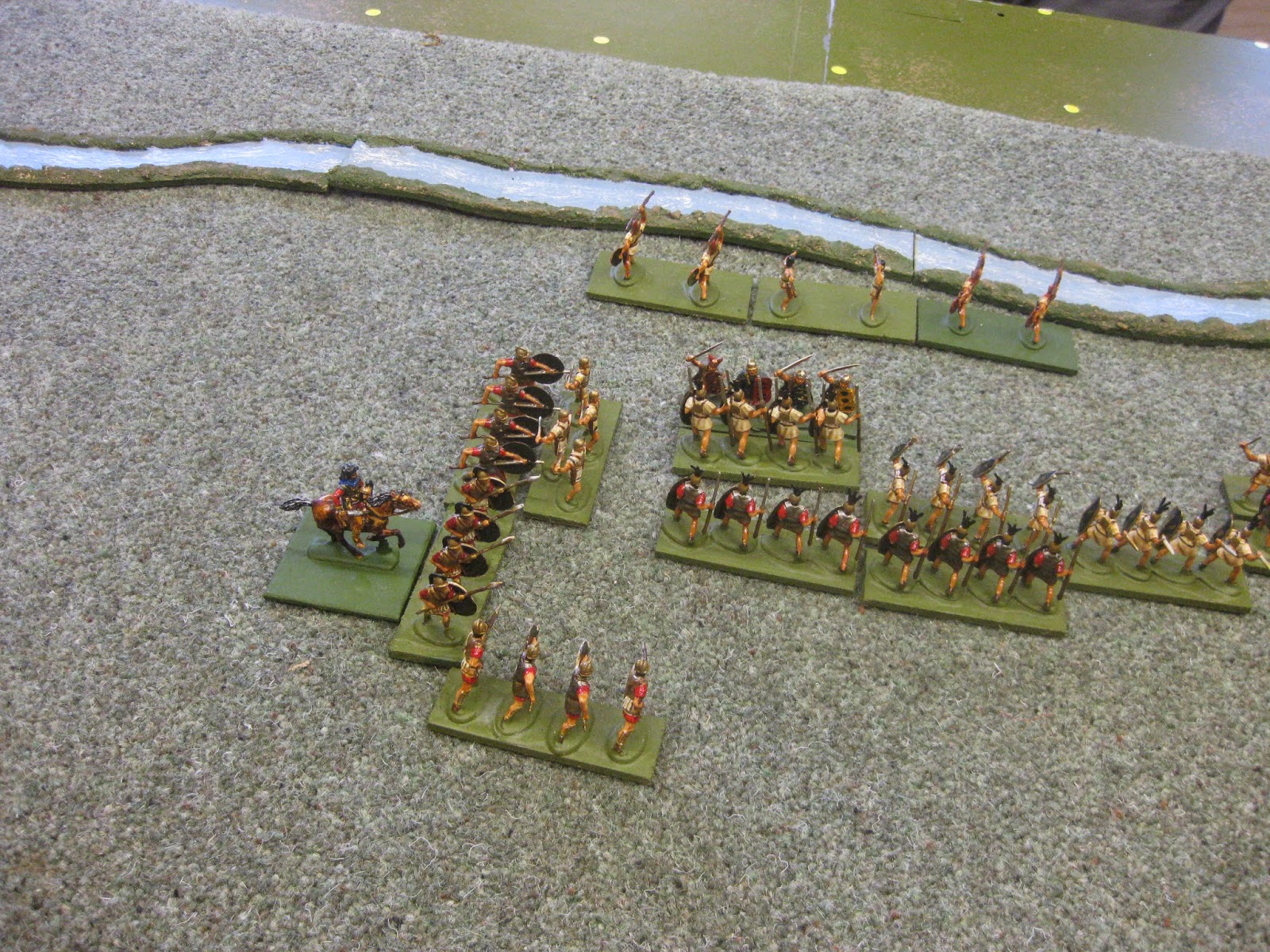 This is decisive and he rolls over two more blade elements. The rest of the turn gives me one more kill, but that's it for Rome. Victory to Hannibal

Well, we got a close run Carthaginian victory with lots of dead Celts, so so far, so much like history. Except the battle didn't really run right. The heart of the battle is the forward bowing Carthaginian infantry line steadily being driven back by the Romans before the pocket is closed. Bowing out the line is a no-no anyway in DBA as it immediately gives the Romans an overlap on contact.

There are a number of ways to deal with this. I could add another 12 infantry elements aside, classify the centre as warband and make them double depth. The Romans would just get an even deeper central body of troops that can do nothing. That's quite attractive as an idea.

On the other hand I could modify the troop factors/types. If the Celts/Spanish were blades that'd make things much harder. Probably too much harder. Phil suggested making them hordes, as these don't recoil. It's an idea, and he used it in his Zama game. Being me I'm good to pinch other people's ideas, but I also like to do something original if I can.

Another idea would be to allow the Celts/Spanish to voluntarily recoil if any unit in the group is recoiled in combat. That would give the Hannibal player an incentive to get his line right far forward and then give ground whilst he wins the cavalry fights, and deny the blades the easy kills from the overlaps.

Final thoughts, - well the carpet isn't great as a base board because of the poor colour match in the pictures (it's better in natural light). I used it because my table is made of sections and I don't want the dividing lines in the final photos. However I reckon we can play on one of my 5'x3' tables, so that shouldn't be a problem. Otherwise I have to decide whether to reclassify the Balaeric slingers as bows, to give the Carthaginians some ranged weapons. Paullus was wounded by a a slingshot, so it seems right to have some shooting. The other thought is to allow Paullus a "pop-up" roll if he dies, allowing him to relocate from his cavalry guard to an infantry element, as happened in the battle.

But a good start, I would say.

*Or perhaps Hannibal should be able to add his PIPs together and share them out as he sees fit with Hasdrubal? Food for thought.
Posted by Trebian at 10:37