Having rebased all my  ECW figures there was a need to get them out and play with them.

About a decade ago, - pre blog days, I think, - I resolved to try to refight all of the battles of the English Civil Way, starting with the battles of the Bishops' War. I think I've done quite a few by now. A quick check of the blog indicates I've done Edgehill, Langport, Lansdown, Nantwich, Adwalton Moor, Roundway Down and Cheriton.

I was flicking through my go to text (Brooks' "Battlefields of Britain and Ireland") for inspiration, and had settled on Nantwich as I'd forgotten we'd already done it. As I set it up I thought that it would give me some structural issues with how it would play. It was as I was fiddling about that I wondered if I could do Marston Moor. After all the rebasing had given me quite a few extra units.

Some quick back of an envelope sums and it was clear I had plenty enough toys, and one of my gridded mats would be the right size for the game.

Well, why not? After all, it's only the biggest battle ever fought on English soil (sorry Towton) so you have to have a go sometime. Why not try and get it done in a three hour evening session?

My main concern was whether it would run in an evening. I remodified the "Victory without Squares" rules to put the squares back in whilst keeping out the original unit by unit card activation sequence. Are you keeping up? 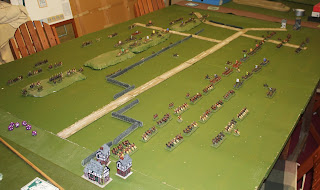 There's quite a few figures involved. The infantry are modelled as 1 base = 200 men, the cavalry as 1 base = 100. 1 square = 250 yards. Due to issues with my hill system(s) I could only represent the front edge of Marston Moor, where the Royalists deployed, top left of the picture. In setting this up I used Brooks & also Newman's book on Marston Moor. If I had given myself more time I'd have looked again at Wanklyn,  Young and Seymour. In fact, I may well do that and revisit the battle in the future. 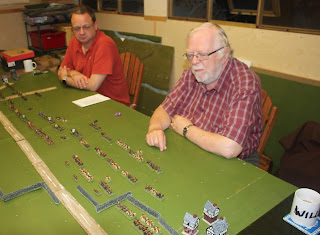 Steve turned up first, and took the Parliamentarians. He was joined shortly afterwards by Richard (out of shot, Royalists), then Will, who shared the Roundhead command. Then Chris K turned up, as the briefing finished, and he got the right wing of the Royalists. Later on Phil would arrive, to run Parliament's centre, and then latterly Rupert's horse as CK had to leave having work in the morning. 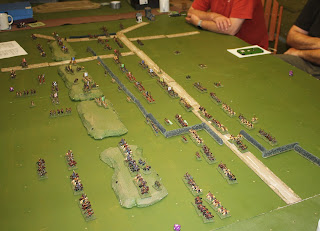 Understanding that their predecessors intention was to attack, Steve & Will did not disappoint. Pushing forwards where they could, they were only held up by some pesky scenery over on their right. Chris K is trying to re-orientate his cavalry reserve to bolster his right, near the camera. It is taking longer than he expected, much to his annoyance, but entirely in keeping with what was intended. Cromwell's horse, having crossed the hedges, is showing no fear of the cavalry on the ridge line. 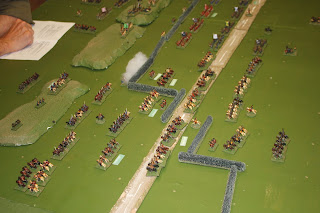 Napier's foot behind the hedge hold off the attack on them with some musketry. The cavalry on the left of the Parliamentarian line start to engage. Byron & Cromwell eye each other warily (I got the Royalist wing commanders the wrong way round during the game thinking Goring was on this flank. Silly me. He was facing Fairfax). 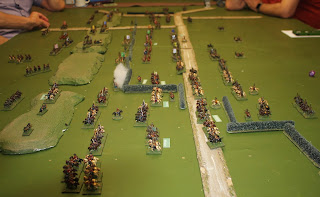 Will has got his dragoons right out on the flank, ready to dismount and "amuse" the Royalist cavalry. 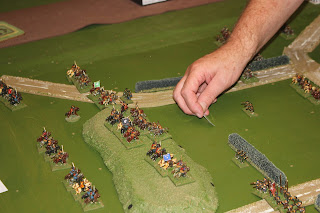 Fairfax's horse make their way through the difficult terrain over on Parliament's right, and he leads them in an attack on the Royalist cavalry up on the moor. They are repulsed. As you can see there are bases of commanded shot scattered about. They were mostly ineffective. 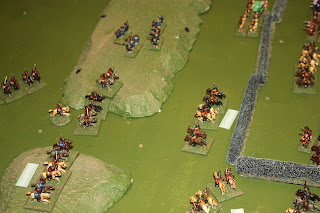 Napier is finally driven back from the hedges, but Rupert is there to cover the exposure. Clearly avoiding his showdown with Oliver. 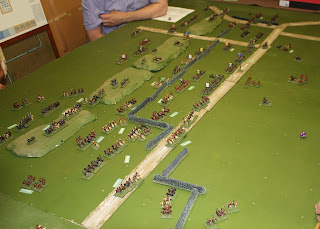 It's all getting a bit confusing. Byron has been captured, following being unhorsed in a charge. However the Royalist horse nearest the camera have broken their opponents, despite being enfiladed by the dragoons. This attack triggered a bit of Parliamentary panic. 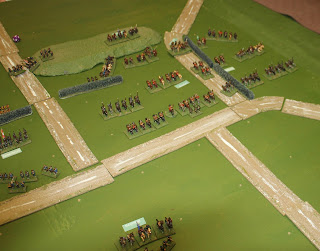 Fairfax is still making slow but steady progress, pressing Goring hard. A surprise charge on his left by some Royalist horse breaks the opposing foot, and opens a hole in the Parliamentarian front line. 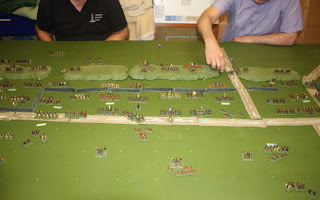 Chris has gone home by now, so Phil switches sides. The right centre of Parliament's foot has come unstuck attacking the hedges and is now being firmly pressed back 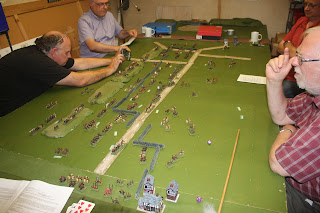 There's a lot of Parliamentarian stuff going backwards now (lots of poor die rolling involved), but they are still in the game. I was reminded in the original battle that there was a point when the Scots and Parliamentarians thought they'd lost it, and people fled, spreading the bad news. 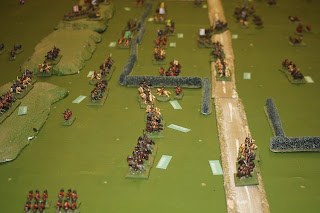 Historically Cromwell saved the day, only here he didn't, being either seriously wounded or killed. Most of his cavalry is in less than pristine condition, and the army is close to breaking point.

I ran one more quick turn after this to see if the Parliamentarians could get in an effective counter attack, but to no avail. Win to the Royalists.

What the game showed was that the Royalists were in a strong position, which caused the Scots and Parliamentarians a lot of issues when trying to attack it. They were confounded with some bad luck, and were unable to recycle their units and make their numbers count. They had quite a few bad reactions to units routing in adjacent squares, which kept them firmly on the back foot.

If I was to do this again, - and I may well do so - I would look again at deployments and the terrain. There is debate as to how much of an obstacle the ditch/hedge line was, and also whether there was much advantage to staying up on the Moor. That terrain advantage served the Royalists really well.

I was pleased with how the changes to the rules worked, - removing card activation speeded the game considerably. We also had quite a slow start, and got in only a couple of turns in the first hour. Lots of figures, lots of players and unfamiliarity with the rules all conspired to cause this.

For the future, however, I have more decisions to make. I need to write an ECW period rules system for my own peace of mind, but I'm not sure where I want to start from just yet.

But otherwise everyone enjoyed themselves, I think.
Posted by Trebian at 11:58