How quickly a year comes round. Or at least it seems so some times. This Sunday we were back in "The Cresset" in Peterborough for the Hereward show, which we attended last year for the first time. 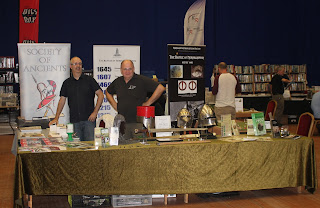 Despite our fairly late confirmation we had a prime spot in the main hall. Due to Chris getting there early we even bagged an extra table so we could set up our favoured U-shape, backed by our banners.

Hereward isn't a big show, but has a good selection of traders and some excellent participation games. We did steady business all day but weren't overwhelmed. Funnily enough although the footfall was considerably lower than at either Partizan we were busier talking to people than we usually are there, and we played the 1460 game more too. And we sold more books and games. Make of that what you will, - suffice it to say, if you live within driving distance of Peterborough then I think you should support the show. We have precious little in the East Midlands area on the wargames show front. 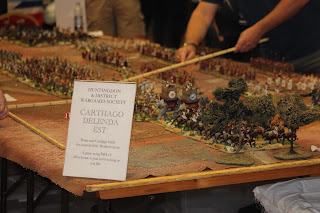 There were some eye catching games. This big DBA Rome v Carthage using the Hat 54mm figures looked lovely although I think I've seen them elsewhere. It is fun to see figures I've got in 20mm plastic looking "all growed up". 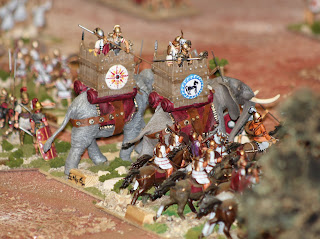 Whoever did the armies swapped out the Hat 54mm elephants however, which is a pity as I quite like the originals. 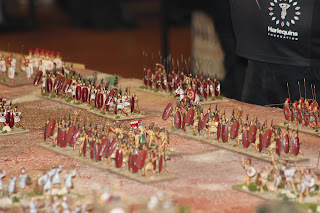 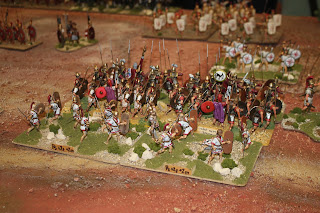 The armies did finally end up hitting each other, but I don't know the outcome. 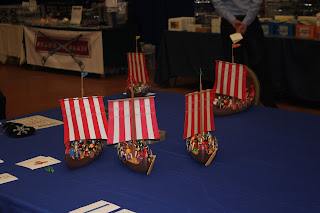 Just across from us was a Viking game using Playmobile figures and ships. They were full and busy all day with players of all ages, and everyone seemed to be having fun. They won an award for best game of some type. Well done to them for getting people to play games at a show. 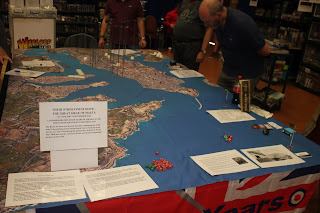 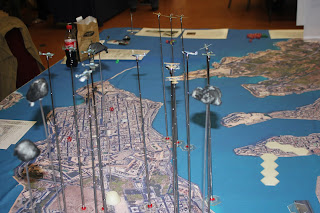 ...but the presence of someone's lunch is pretty much unforgiveable. 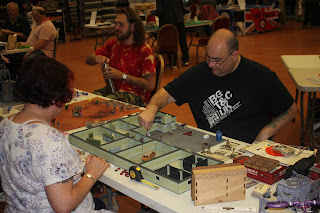 Elsewhere MNG occasional, Graham S, and his missus enjoyed a game of 7TV, although in Graham's words "It's fun, but it always goes on too long". 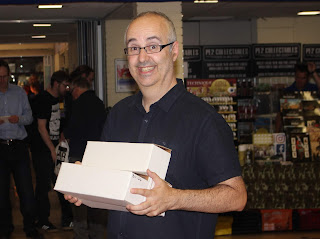 Hereward doesn't have a bring and buy, but does have "Table Top Sales", where you can hire a half hour slot on an empty table. Chris A is feeling smiley because he's just picked up some 1/200 ACW river Ironclads at knockdown prices. As I was tied up on the stand he kept an eye on what was up, and sure enough the plastic figure guy from last year was back 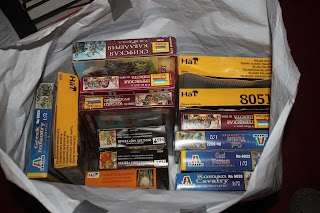 This meant I was able to pick up most of the boxes of figures I regretted not buying last year. At 50p a box what's not to like, although alas the Republican Romans turned out not to have many figures in the boxes. However, as I was paying 50p for boxes of figures I paid £6 for a few weeks back it would be churlish to moan. 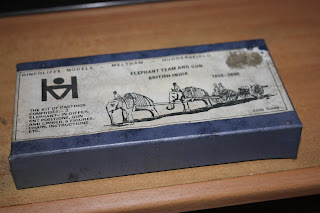 And then there was this. My Indian Mutiny armies have never had limbers, let alone an elephant drawn gun, so I had to have this, even though it cost me an outrageous £3.

So, all in all a very successful day.
Posted by Trebian at 10:12