As I hurtle towards the publication of "It's Getting a Bit Chile", my rules for the 1879-1884 War in the Pacific, I thought I should squeeze in some more playtesting. This Tuesday, due to other commitments, the Monday Night Group was down to just me and Richard. That meant that I had to push lead rather than supervise players. Which is nice for a change.

I put out a simple scenario about an attack on a village occupied by two Chilean battalions by Alliance Forces, whilst a Chilean Division rushes to relieve them. I took the Alliance and Richard the Chileans.

I wanted to look again at how fighting in built up areas worked and also focus on the infantry action, so no cavalry and minimal artillery in this game. As I was playing the photographic record is a bit patchy. 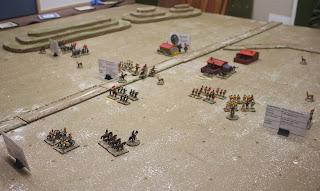 There were three small Allied Divisions, two Bolivian and one Peruvian, together with a reserve of an artillery battery and Daza's personal cavalry guard. I've lined up one Bolivian Division on each of the two occupied buildings and sent the Peruvians out on a left hook. 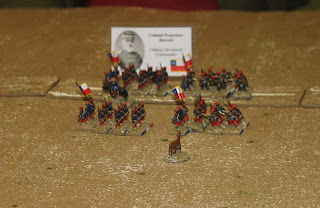 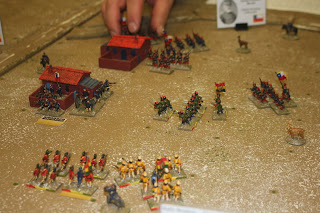 I've got my units lined up on the building on the right, but Richard's reserves are closing in on me more quickly than I intended. 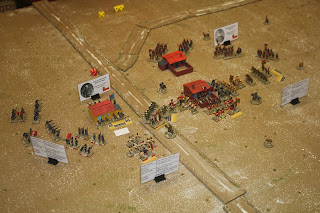 I go in with three units against the right hand building. I've managed to shield my attack columns sufficiently that they are at full strength for the assault, and I've gone in at the front with an open order unit too, to draw fire. The building is defended by an infantry battalion and half an artillery battery. 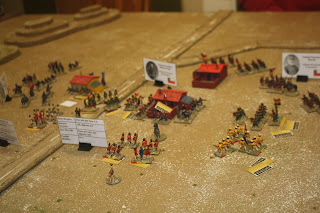 The artillery make all the difference. A quick blast of shrapnel at close range and then resorting to carbines holds off one battalion, whilst the infantry drive off one of the others. The remaining attacking column is locked in a life and death struggle across the walled compound (BTW that detail on the artillery is abstracted in the game, but it plays in my head when it happens). 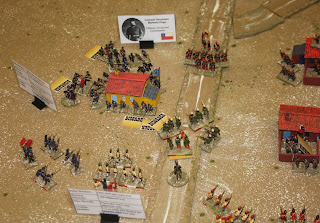 The following round the last column is driven off, but the attack on the yellow house goes in. 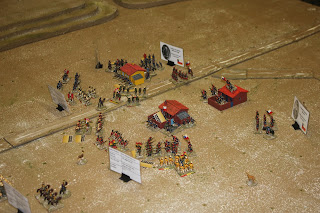 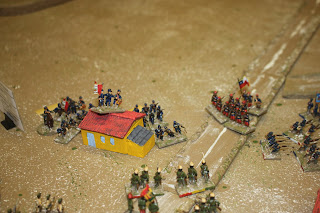 The struggle for the yellow house is brief but bloody, as my brave Peruvians  storm in, mounting their standard on the roof of the building. 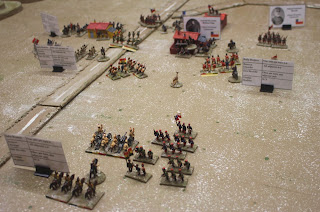 The Bolivians are having a less good day, and President Daza is  forced to hide behind his artillery with his bodyguard. 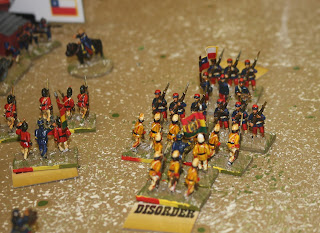 Up by the red house the Chileans launch a bayonet charge on the Amarillos. 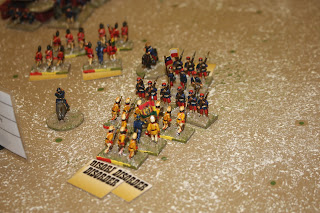 Thew Amarillos come off worst in the encounter, and are tumbled backwards in Disorder. 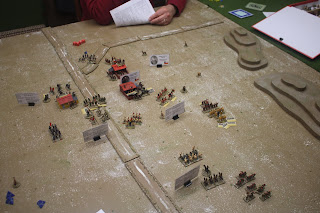 The battle is a game of two halves. On my left I'm doing okay, having captured the yellow house, and caused a lot of damage to the units supporting it. Alas I'm unable to stem the troubles on my right... 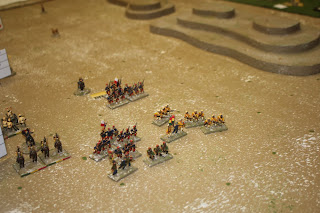 ...and before I know it the Amarillos have broken too, so the Bolivian forces start to stream to the rear.

I picked up a couple of slight tweaks to the mechanisms from the game, - but mostly identified one or two areas where I need to put in some extra fully worked examples. For example the sequence by which you move into and occupy a built up area and then fortify and defend it is logical to me, but needs to be laid out step by step.

Richard was pleased with the game, and made some nice comments. He likes the mechanisms he hadn't seen before, and he liked how the different infantry formations performed, each one having clear differences and purpose. He was also quite taken by the Commanders' ability cards and how each one is slightly different, depending upon who he is (if you click on some of thep ictures you can probably see them in close up).

I had uploaded the full rules onto my Kindle as a pdf to use as a reference, and that worked okay. I don't really want to print out another full set just yet, as it's getting up to 60+ pages, and I can read and annotate the pdf on the Kindle before typing the changes into the book text later. Yeah. Looking good. Might make it out just before Christmas, and if not, certainly in January. 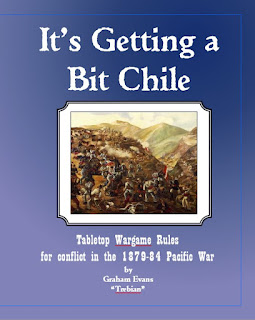 Email ThisBlogThis!Share to TwitterShare to FacebookShare to Pinterest
Labels: It's Getting A Bit Chile, Pacific War 1879-1884, wargaming