I rebased all of my Sumerians over the weekend to smarten them up a bit. I've never been happy with the green bases for them, which is my standard for plastic ancients, and finally decided that I could break the pattern for this army. After all, I'm never going to put them up against Alexander or Hannibal.

Of course, having done all that work, I had to get them out for a game. 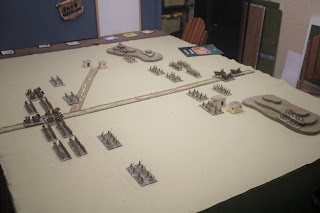 The new basing also means I move from my old green cloth marked with crosses to my sandy felt, marked with discrete black dots. I can't use my green block hills anymore, so I used my standard sand hills, marking the corners of the squares with green sticky dots.

I've got a heavily armed invasion group on the left, and some border guards on the right. 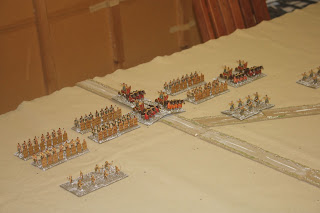 Here are the invaders, looking rather splendid. 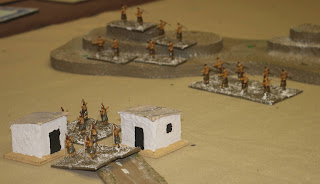 The invaders occupy a small village, having got the initiative and moved first. The defending light troops "swarm*" towards it.

A full on advance for the invaders. Well, it's a solo game, and that's how I roll, y'know? 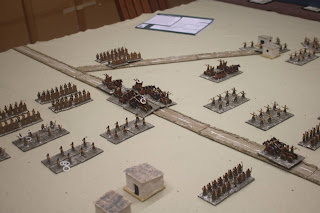 Due to a mistiming the invaders launch a battle cart charge. The defenders respond, but their Lugal isn't attached to the unit. Could that be significant? Turns out it is, as they lose the melee and are forced back a square (although they hold their "Fight"  status under the Fear test). 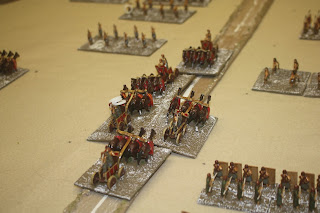 Second round of melee, and the defending Lugal joins in. Equal hits on both sides, but earlier loses mean the defenders lose a base. 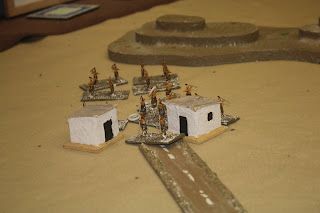 An attempt to storm the village goes awry as one of the attacking units fails a Fear test, and ends up just looking on. 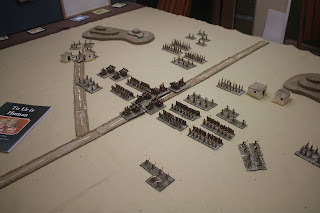 On the left, the other unit of Battle Carts refuses to charge the formed infantry. Elsewhere the two lines close, the invader's skirmishers dropping back behind their heavier troops. 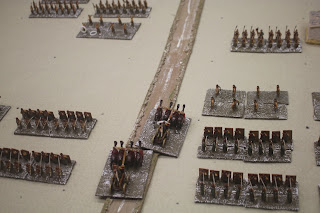 The defender's lose another round of battle cart combat, and their Lugal dies in the melee. Not good. 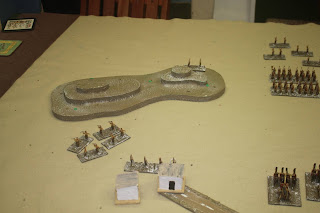 The attack on the village is also a failure. 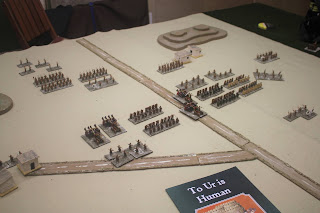 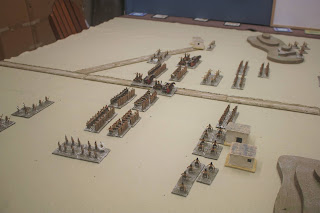 The defensive light infantry drop back to the other village to avoid being charged. 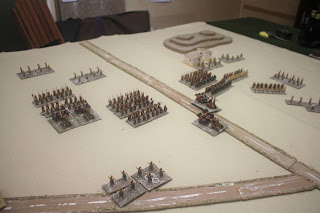 Finally, the battle carts charge on the left. The defending infantry are so shocked they drop to "Fright" status. The attacking infantry is now in range, and charges home. They're hoping for a big win on the right before the defending "Auxila" catch them in the flank. 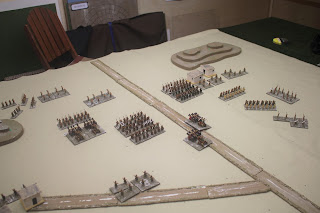 The charging battle carts break the first line of infantry, despite them having supports. In the centre it's a stalemate, but on the right, the defenders are driven back. 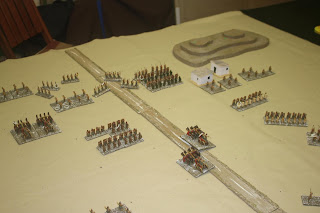 Then, final move. The right hand carts break the supporting infantry, and the infantry in the centre also prevail, putting their opponents to "Flight". On the right the defenders are driven back, but continue to hold on to their "Fight" status.

So, a win to the invaders. I was a bit rusty on the rules, so it was good I was solo-ing, rather than umpiring. I need to sand the edges of the bases, so they don't catch in the felt. Otherwise, not much to say. They're a simple set of rules, and I think they work quite nicely. The new look is a definite improvement, too.

Not a bad evening in Shedquarters.

* The Sumerians called skirmishers "flies".
Posted by Trebian at 12:02