I wrote recently about my friend Bob's SCW rules that he has just republished from the 1980s to which he had appended a variant of his Portable Wargame system. This week the Monday Night Group took the opportunity to give them a go, and we tried out the "Clash of the Columns" scenario from the book, which features a Nationalist column trying to drive up a road to get to Madrid, whilst the Republicans try and stop them.

I ran the scenario solo over the weekend, and decided after that experience that rather than use orthogonal squares that I'd use hexes instead, or in my case, offset squares. 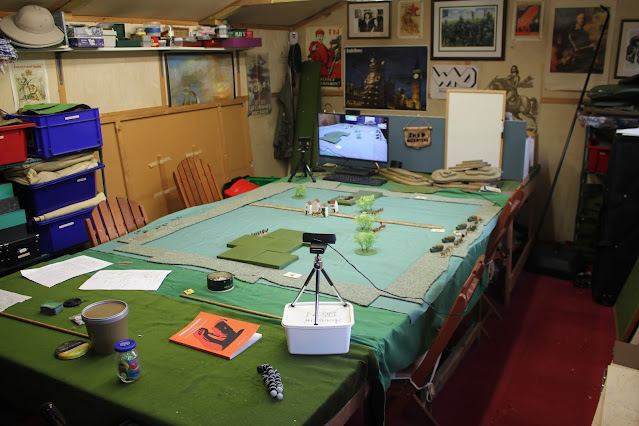 I know the game is supposed to be played on a small area, but as this was a multi-player zoom game I set up close to my normal size table. Units in the game have Strength Points, so I put out one base per strength point for normal units. That means that the units look like battalions in my other set of SCW rules, which also play on a grid like this.
The defenders have four units and some guns - so they look like a typical brigade sized column from the early war - and the attackers three and some guns, so again they look like a typical mobile column.
What did surprise me when I set things out was that the random tables in the rules used to generate unit and commander quality, as well as who had air superiority. I rolled these out before hand and got fairly balanced outcomes. The Republicans got full air superiority. As this is all random the scenarios are playable multiple times with differing army quality and air support. This is something I hadn't thought about doing, as usually I try and balance the scenario taking into account unit quality (having said that I have been experimenting with hidden morale states for my 18th century rules, as I mentioned a couple of weeks a go). 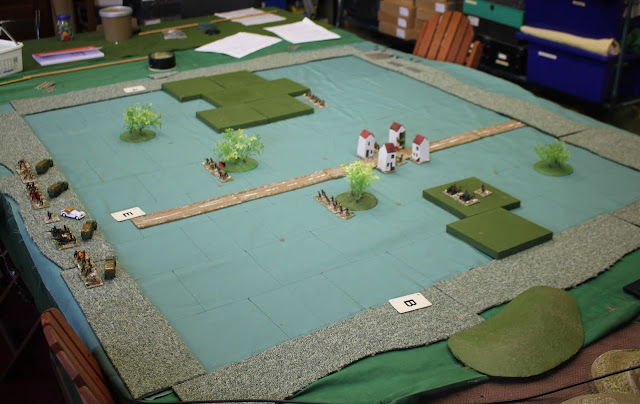 Jon volunteered to be Republican, and sent me his deployments. Richard and Ian took the Nationalists. 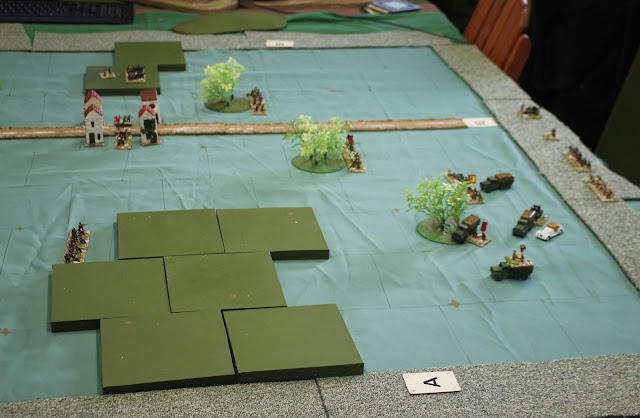 The initiative roll for turn one was won by the Republicans, which was unfortunate as there were no Nationalists on the table at this point. Jon passed up the opportunity to move anything, so the Nationalists swarmed on, left flanking to avoid the strong position on the Republican left around the village. 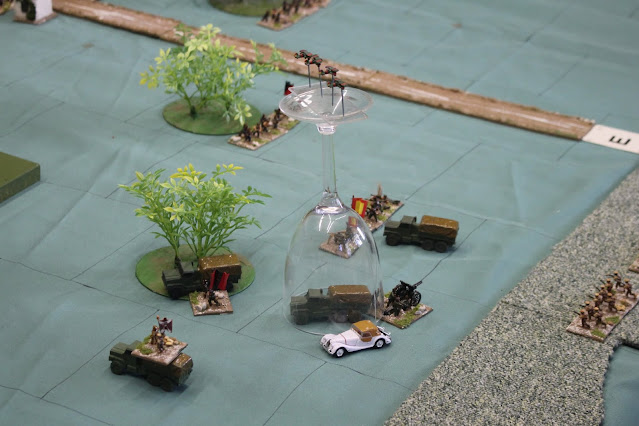 Jon then rolled for his air assets, and got an air strike. He directed this to target the Nationalist artillery unit.  It inflicted two hits. 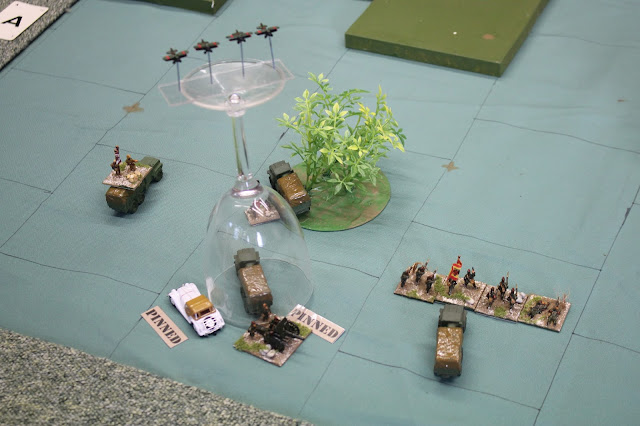 The first caused a Strength Point loss and pinned to unit as well. 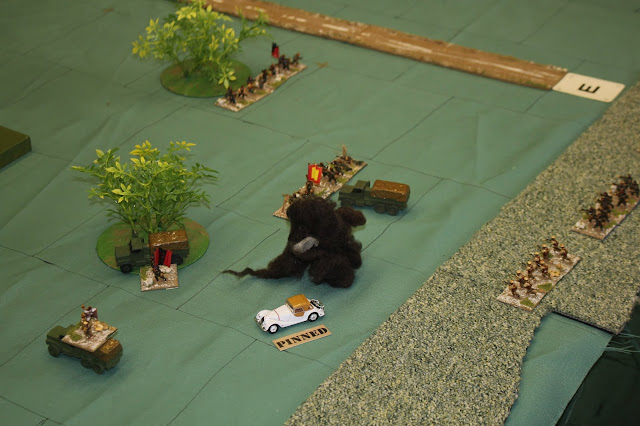 The second eliminated the second SP, destroying the Nationalist guns. I may have got how hits are inflicted on Commanders wrong, so I need to re-read the rules to check. 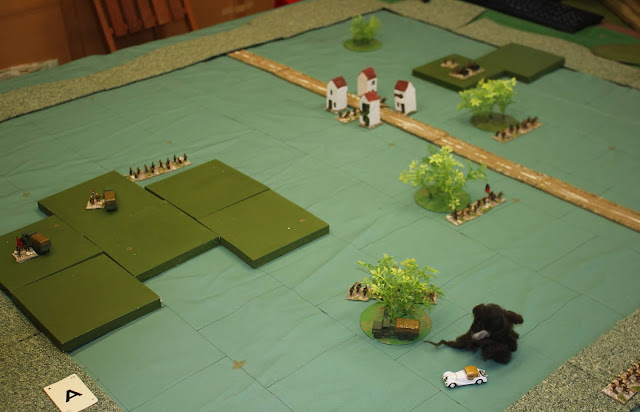 Undeterred, the Nationalists debussed a unit in the central olive grove to pin the centre, whilst two trucks raced further out wide. Their victory conditions were "dislodge the defenders and get a unit to the top of the map". With no further definition of "dislodge", Richard was focussing on getting to the top of the board. 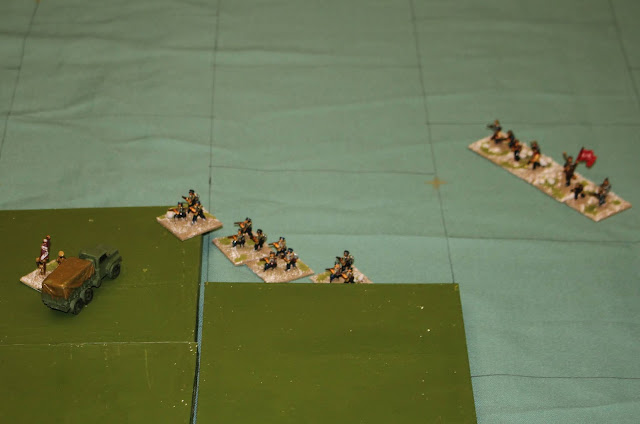 Having driven close to the hiding Asaltos, the Moroccans were "surprised" by a close assault. We had a short discussion about whether you could close assault trucks moving at full speed. I couldn't find anything in the rules about it, so I applied the modifiers for attacking flank or rear (I don't address this scenario directly in FWTDR, but you deal with it by applying the infantry assault armour rules with the modifiers for softskins, and the outcomes of truck destruction covered in the artillery rules). The close assault was driven off with no losses on either side (for some reason the close assault system has you roll the dice for your own troops, taking hits for low numbers. This is the inverse of the firing mechanisms). 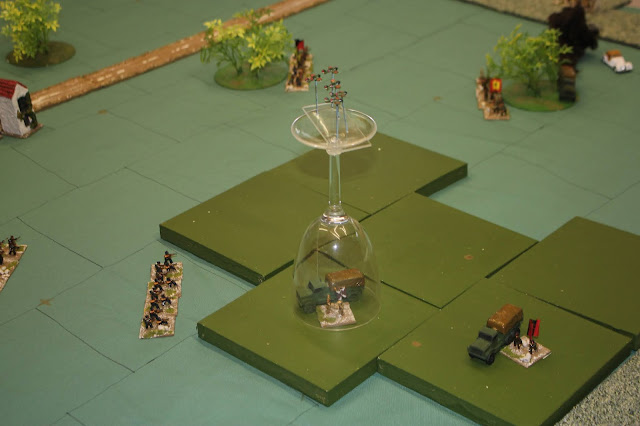 Next turn, and the Republican air force returned. 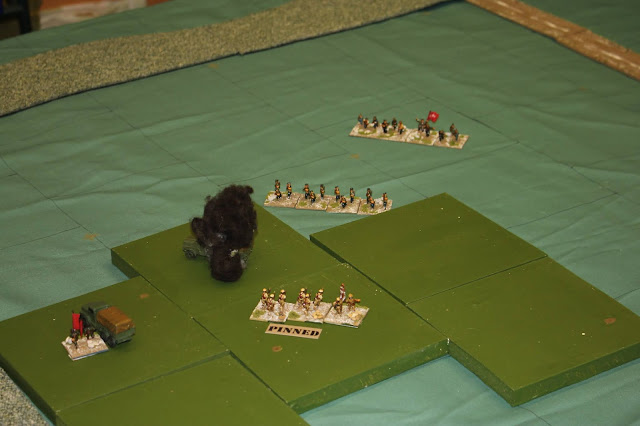 A single hit destroyed the truck, and the occupants retired. I may have got this bit wrong. 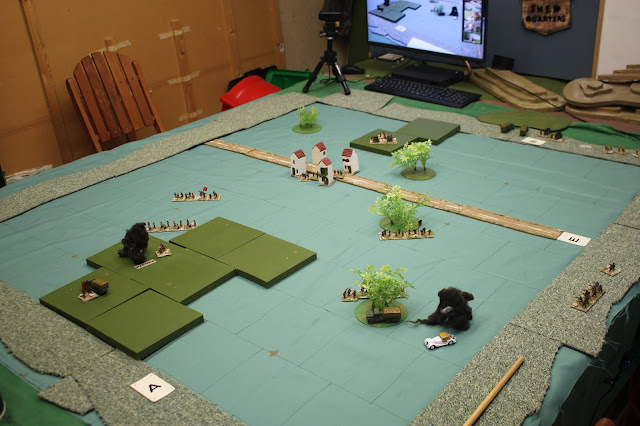 The artillery now joined in and inflicted further damage. The Nationalist army was now exhausted, and so could not advance. That meant they could not win the game, so a win to the defenders.
We had a brief discussion at which both sides expressed the view they had expected to lose. I went back and checked a few rules - I must re-read them fully again - and then we agreed the reset the game and haver another go. 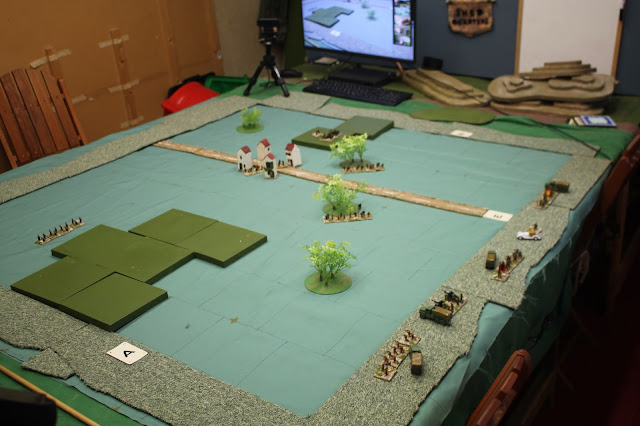 Jon set up to cover more of the right hand side of the board from his perspective. We re-rolled all the random generated values, which worked in the Nationalists favour, getting better quality units (elite trucks, no less) and air superiority. 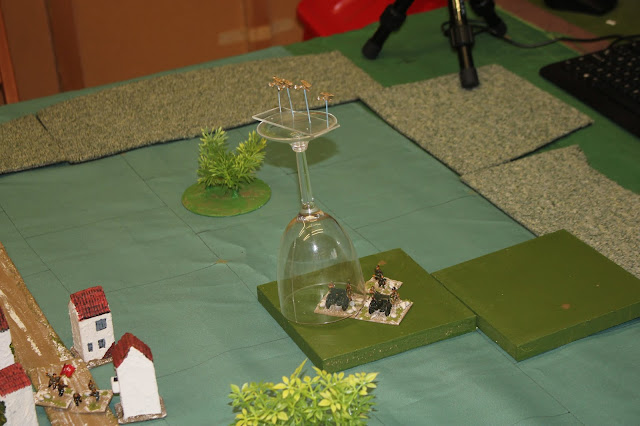 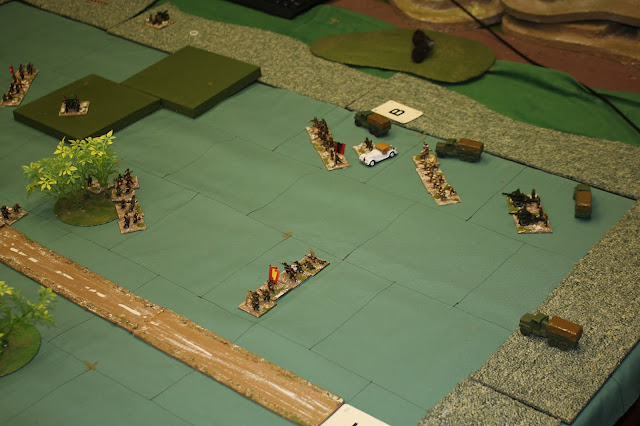 This time Richard and Ian go right flanking, and squeeze everything into the corner. When Jon swivels his artillery he is able to hit the Nationalist commander's square and his nice new white car. The Nationalists make use of the commander rule, which negates the damage inflicted at the risk of him being killed. They try that again in the next turn, and alas he dies in the process. 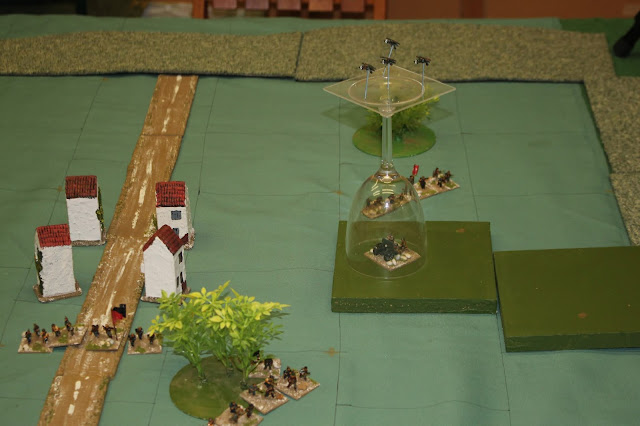 More air strikes! This one missed. In his 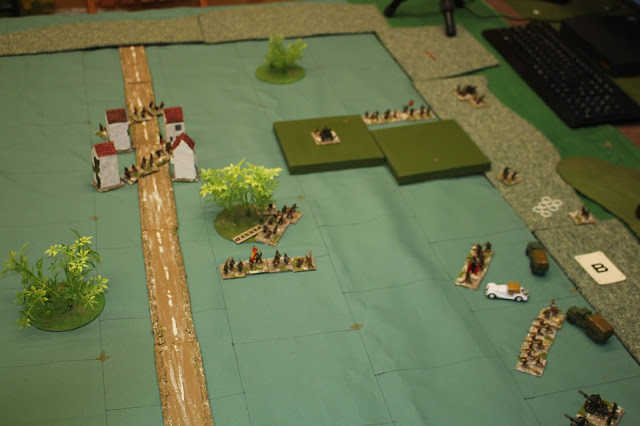 The Nationalists are making a better fist of it this time, and inflict some artillery damage on the troops in the wood. 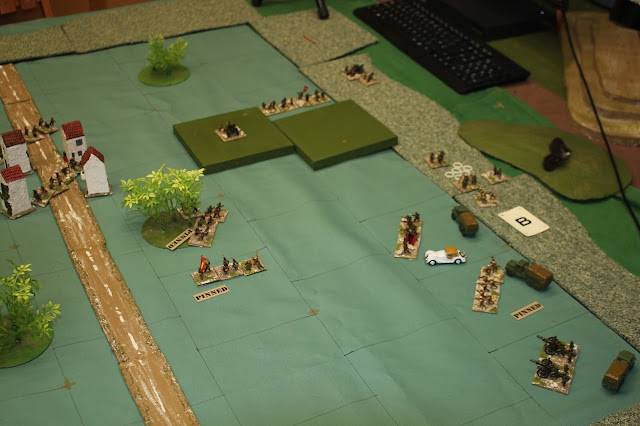 The Legion are shelled by the Republican artillery, and once more the Nationalists become exhausted and lose the game, mainly due to the loss of the commander. 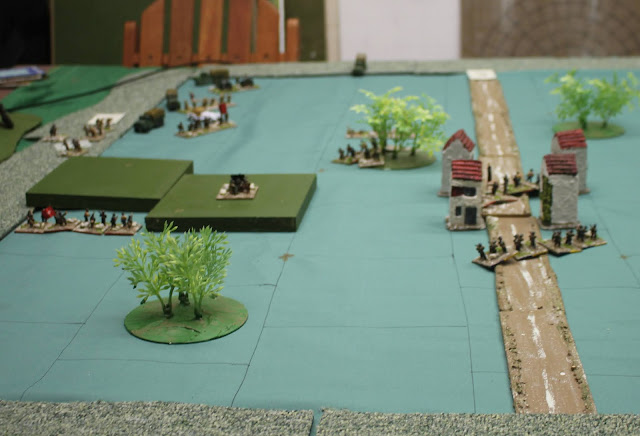 We didn't reset and play again after that, as we'd had a couple of hours. I think both sides felt a bit frustrated by the game, which I think was at least partly down to my inexperience with the rules. I really need to have another read as we had some questions that I couldn't answer at the time (e.g. Can you debus and fire? Debussing takes all your movement, and you have to reduce movement by a square in order to shoot, so the rules imply you can't). And I kept forgetting to ask the Republicans to make their co-operation tests, although I think it would have made little difference.
We discussed giving another scenario a go at a later date, and I was greeted by a "if you want to" response. I feel I should, just to give Bob a fair crack of the whip, so I may do it as a solo game. Amongst the group we have played a similar scenario several times with FWTDR, with similar sized armies, and it did play differently. There are similarities. Getting "Pinned" really mucks up your plans, and makes it hard to move units around. Pinning a unit by small arms fire is harder in FWTDR, and it may be the case that Bob has got closer to the truth with that. He has dealt with issues differently to me, and in ways I hadn't thought of. The air superiority/air strike system worked well - it comes from Arriba Espana - and I would copy it, if I didn't have a card riven activation system, so it would stick out as an anomaly.
TPSCWW is almost certainly a better solo game than my own rules, and also better for restricted space and time. I could also see that it made people think carefully about what they were doing, which is often a good sign. It is probably easier to learn, as well, but I would also add that I had to email Bob beforehand to clarify his thinking on certain things, like indirect fire. He pointed out that I could/should do what I think appropriate, a point of view I heartily endorse, but on this occasion I wanted to play them as the author intended. Again, as a solo game my issues wouldn't have been a problem. In a multi-player umpired game it's a different matter.

And there really needs to be a QRS.