What's next, after playing on-line games with the blokes up the road? Well, why not expand the circle of participants to include Cambridge and Washington State? Jon F of the Palouse Wargaming Journal blog has been a regular commenter on the blog, and a supporter of the rule sets, so it seemed like a cool thing to do to see if he wanted to Skype in for a game of "To Ur is Human". From Cambridge (the original one in the UK) we had young Rob G. Why I know him is too long to explain. He and Jon took the attackers, and Richard the defenders. 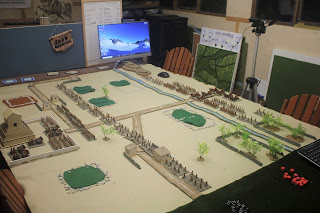 This was slated to be the first big workout of these toys since the mass rebasing project. As I wasn't sure of player numbers, I went for a simple attack and defend scenario. The forces of Ur, off to the right in the picture, are aiming to crush a rebellious city state of indeterminant name. They are an upstart city with a new way of building ziggurats. This sort of thing cannot be allowed to flourish.
The attackers are stronger in heavy infantry and battle carts, but the defenders have masses of missile armed skirmishers, and other massed bowmen. 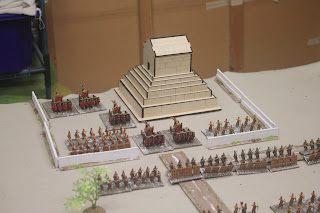 Their battle car reserve and the Royal Foot Guards are gathered round the holy ziggurat. Actually its an mdf model of the tomb of Cyrus the Great (the provenance of this model is discussed here: Link. 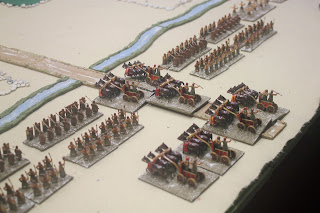 The attackers have a bottle neck for their battle carts, as there's only one way across the irrigation ditch. 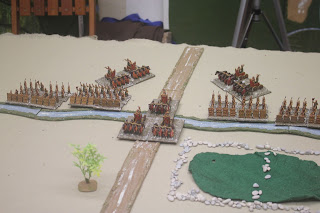 First turn, and Jon & Rob are off, across the ditch. The fields marked with pebble boundaries are not obstacles. I scattered them across the board to help the players pick out where the squares were. The single trees are on the corners of squares too. 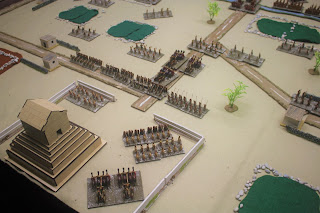 Richard, in response, immediately deployed his reserve battle cars, and pushed forwards with his missile troops. 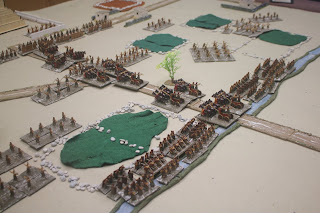 Throwing caution to the winds, and at Rob's urging, Jon crashed into the massed archers in the centre with his Lugal-led battle cars. They had previously failed to inflict any hits, and dropped to "fright" status. Not looking good. Over in the distance, Richard's skirmishers had inflicted some damage, but Rob decided to charge in anyway. Sort of his signature move. 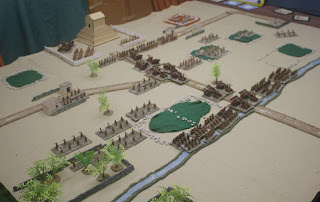 Trapped by their own forces, with nowhere to run, the massed archers suffered badly. Elsewhere clouds of sling shot, javelins and arrows filled the air. 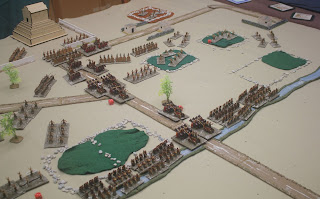 With the massed archers gone, the two Lugals led their carts into battle. It was a titanic clash. Or would have been, had Richard not rolled really badly on his Fear Test and bottled the charge. He did not have a good evening for his Fear Tests. He really didn't.  However, in slightly better news you'll see that he has succeeded in shooting away a base of the second wave of battle carts. These, however, are undaunted, and have declared a charge on the massed archers that shot them up. 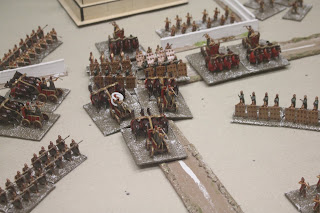 Jon's carts clatter through their frightened opposite numbers, and crash into their supporting infantry, which Richard's Lugal is now sheltering behind. These infantry also failed a Fear Test. The Carts were having a very good day. 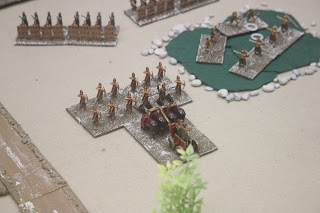 The massed archers, however, did not take fright, so this one was looking a bit dodgy for the onrushing carts. 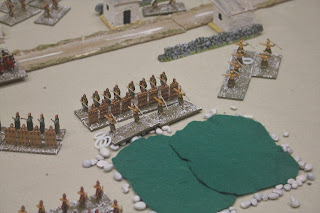 Flushed with his success over Richard's skirmishers, Rob launches into the front of shielded heavy infantry. Well, he is consistent. (Note to Rob: The skirmishers have javelins, move faster than the heavies and can evade.) 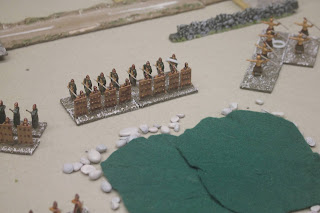 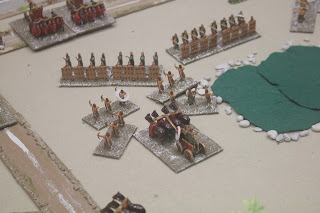 Richard's dice rolling explodes in his face again, and his other unit of archers are soon heading for the base line. 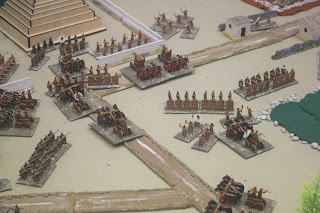 In the centre, Jon breaks the first line of infantry opposed to him, but the Royal Foot Guards with Lugal are there to prevent him defiling the temple sanctum. Or whatever. 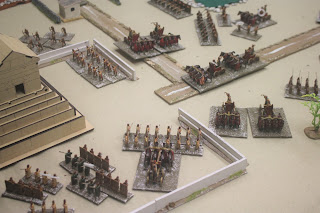 Alas, they too do the discretion and valour bit, leaving Richard's Lugal to skulk behind his last unit of Foot Guards. Jon declines the opportunity to rampage into the city (I'd have stopped the game there and called it a win if he had). 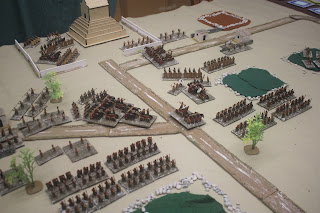 Instead his Lugal dashes off to inspire another unit of carts, whilst he withdraws the remnants of his initial unit, who retire in the knowledge of a job well done. By now Jon & Rob's heavy infantry are well clear of the irrigation channel, and are pressing up the table, restricting Richard's room for manoeuvre. 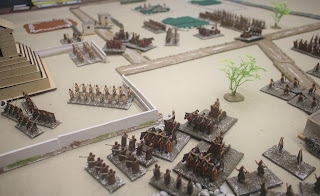 The Lugal now leads his second battle cart unit onto glory, trampling the fleeing infantry underfoot. You will note that Richard's cunning plan to ambush them with his own battle cart unit fails, as they refuse to charge.
He really didn't have a good evening. 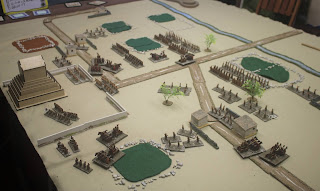 Richard tries to salvage something, by getting his other cart unit out of the way, in the hope he can rally up a fear level. But basically it's all up. 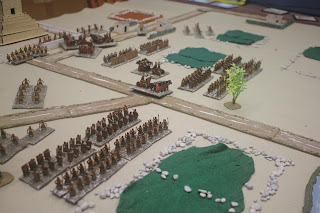 I have played a lot of games of "To Ur is Human" and never had one where the battle cars have been so effective. They intimidated their opponents then ran all over them. It was truly astonishing. I mean it is what is supposed to happen if things go well for them, but I've never seen it go THAT well.

So, a fun evening for the new guys, less so for Richard. I'm pleased with the new look for the armies, and the lighter cloth helps with the photography. I think we have this video game thing sorted now, except for the sudden loss of internet speed and the need to swap from Skype to Zoom half way through.

If you are inspired by this or interested in the rules, then you can order them from Amazon, where they'll cost you £5 or equivalent. Copies ordered from me incur a £2 p&p charge, unless you order them with another set from my extensive catalogue, as it's postage free for orders over £10. Email me at wgfgup(at)gmail(dot)com if you are interested.