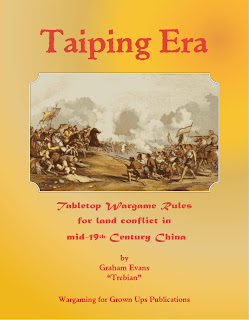 "Taiping Era" is a set of table top wargame rules for battles in China during the mid-19th century. They cover the period from the 1st Opium War (1839-42), through to the end of the Taiping and associated regional rebellions (c1870), ending before the introduction of the breach loading rifle. If you know little or nothing about the Taiping Rebellion, the largest and most bloody civil war ever fought anywhere on the planet, then George MacDonald Fraser's "Flashman and the Dragon" will offer you a quick and readable introduction. The game is played on a gridded playing surface. The rules were written for 15mm figures, as that scale offers the most complete ranges for the period, but are not scale specific. The squares used are 6", which suit 15mm, but could be enlarged for bigger figures. The rules cover the wars fought between the various  Chinese factions, as well as those involving Western troops. A separate supplement covering the Indian Mutiny of 1857 ("Indian Mutine-era") is also available.

Army Size and Figures
The rules were written for 15mm figures on 30mm wide bases, but any frontage will do as long as four bases can be placed side by side in the square. The basic unit is the battalion, or local equivalent (variously called "leu" or "ying" or "chia-la"), consisting of 500 - 600 men. It is represented by four bases, usually with three figures on each. This latter point is convention and does not affect play. Battalions are organised into brigades or "shih" or "ying" (sic), made up of 3 -5 units. These in turn are grouped into divisional or corps level equivalents. Forces can consist of as few as 6 battalions plus artillery, for the famous "Ever Victorious Army", to more the more normal 10 - 15 units when simply fighting Imperial forces against the Taiping. European forces will normally be no bigger than a division (two brigades), and will, of course, face overwhelming odds that they will expect to prevail against.
Troop and Weapon Classification
To capture the flavour of the period, troops are differentiated in several ways. They can be "Native", "Western Trained", "Western", and may also be committed or untrained. The way they fight is either "Chinese Drill" or "Western Drill". This broadly causes all troop types to fall into one of about five categories. This category helps to determine the unit's "Moral Vigour", which is a single number that records how willing a unit is to fight. The weapons available to each side range from the bow, through the matchlock, to the percussion cap musket and cap rifle, such as the Enfield. Chinese units also use spears and swords and shields, and their fearsome Mongol cavalry avail themselves of bow and lance. All armies have access to artillery of varying quality and accuracy from smoothbore cannon to the rifled Armstrong field gun, whilst the Chines also have the quaint and occasionally deadly "jingal".
Style of Play
The game uses an integrated turn sequence, with sides alternating movement, but resolving firing and close combat simultaneously. The turn sequence runs:
The use of commanders is a core part of the game, as they can influence units in several different ways. Each commander has a command card, with unique abilities:

Getting your General in the right place at the right time can be very important - if you can convince your local mandarin to move at all!
Combat and Morale
"Taiping Era" has what is almost certainly a completely unique combat and morale system for a game aimed at battlefield conflicts of this size. When units shoot at or charge the enemy they do not cause casualties, but cause the unit to take a number of tests against its "Moral Vigour" rating. For example, an Imperial Chinese regular infantry unit might have an MV of 5. It rolls a d6, and must roll its MV or less to pass the test. If it fails, then its MV will fall, making it harder for it to pass subsequent tests. The better the unit, the higher the MV, and the more sides the dice it rolls has. British regulars, for example, have an MV of 11, and roll d12s. D12s, d10s, d8s and d6s are all used in the game.

This system is designed so that the most self confident of armies will tend to prevail, but may suffer badly if they over reach themselves. The dice rolled per base are determined by weapon type and range, with a few simple modifiers, keeping the game quick and easy to play.
QRS
The back cover of the rules is a quick reference sheet, that contains all you need to play the game once you have read the rule book.
Other Information
The rules include a brief history of the period, together with detailed notes on how the armies were organised and armed, and a contemporary account of how the Taiping and Chinese fought each other. They are illustrated in colour, with photographs of games in action, clear diagrams, unit flags you can use, contemporary illustrations and orbats for the Anglo - French invasion of 1860. The selection of Command Cards included is supplemented by a free download "Taiping Era Commanders" which is available on this blog. There is also an English language bibliography.
Reviews of the rules can be found on Amazon.
A description of the rules (and some lovely eye candy) can be found at: You Do Not Know the North.
Several battle reports have been posted on the blog:
Virtual Conference of Wargamers Feb 2021
Taiping Trail and Error Feb 2021
Battle of Palikao (part 1)
Battle of Palikao (part 2)
The EVA storm a town
Imperials v Taipings summer 2020 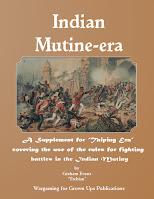 "Indian Mutine-era" is a supplement for the 1857 rebellion. It includes a number of rule changes and troop classifications, together with a few scenarios and commander cards.
A report on some games can be found in these posts:
Playtest
Maharajpur