*WARNING - IN THE INTERESTS OF FULL DISCLOSURE BOB CORDERY, THE AUTHOR, IS A PERSONAL FRIEND WHO I HAVE KNOWN AND WARGAMED WITH FOR MANY YEARS*

At last Bob has completely revised his source book on the Spanish Civil War. This is the third edition and the book, although primarily aimed at wargamers, has now become simply a "Spanish Civil War Military Source Book". And the author is self publishing.

Bob has been researching, wargaming and writing about the SCW for a long time. Probably as long as I've known him, which is over 30 years. So there's a lot of work gone into this book.

Physically the book is hardback with a dust jacket, and has 276 pages. At £25 it isn't cheap or expensive, and for what it contains it's worth the money. As Bob is self publishing don't hang around waiting for Dave Lanchester or Dave Ryan to pick up a load of copies and discount to £10. They're being printed on demand

The book is a source book, exactly as it says. It is a series of sections packed with facts and figures. The sections of text in amongst the tables of armaments and units are clearly written and unambiguous. There are 6 sections and a Bibliography:

1) Political parties and main events chronology
2) The Armies of the SCW (divided by type & faction)
3) The Navies of the SCW
4) The Air Forces of the SCW
5) Police and security forces
6) Uniform guide.

Each of the sections is thoroughly researched and supported by appropriate pictures and illustrations. The only false step, in my opinion, is the use of photos of 54mm wargames figures in the uniforms section. Although I understand why Bob has done this, I never like the look of these types of pictures, particularly as they are embedded in the text and not on glossy paper, in this case, so some definition is lost. Still they serve a purpose and so on balance the book is better with them than without.

I think it is hard to stress how good some of this book is. All of it is good, but the section that gives a chronology of the main events is exceptionally clear and coherent. That isn't an easy feat to perform for the SCW, and it stands comparison with any other summary I have read, including those by the very well known historians in the bibliography. The mass of data assembled on weapons and units is breath taking in the details and thoroughness. I can't think of another book like it for any period I'm interested in.

I only have a couple of other reservations, - or rather, areas where I think Bob might have missed a trick. His descriptions of low level unit organisations are okay for the regular armies but unnecessarily weak for the security forces. I'm a fan of wiring diagrams showing battalions broken down into companies and so on. This isn't always possible for SCW units due to the ad-hoc nature of the war, but Bob has the information and it would have enhanced the look of the book. The other point is a pet peeve of mine. The bibliography includes Hemingway's "For Whom..." but ignores Andre Malraux's "Days of Hope" ("L'espoir"). I think the latter is a much better book in terms of writing and also description of the war itself (admittedly from the air) and tends to get overlooked by Anglophile authors. Seek it out on Abebooks and read it. There's a Penguin edition. There's also a lot more self-published International Brigade memoirs from the 1990s (Bob has some of the Gosling Press stuff listed) about and finding it isn't easy. Knowing it exists is a start.

All of these reservations are nitpicking, and I only mention them because of the disclaimer at the top. Bob is a friend and I don't want people to dismiss this review on the grounds that I would say that, wouldn't I. Well, I've paid for my own copy and I've tried to be thorough. In summary:

I wrote last year about my games with Basic Impetus and how I was unhappy with some of the outcomes as we tried to refight Parataikene with them. I have since raised a few questions on the BI forum and it has been pointed out to me where I was playing the game wrong. Basically (!), however, the game is as it is written as far as players and designers are concerned.

I still have issues, however. If I do Parataikene again - and I will -  I'll end up with the same off-kilter result. The same applies to other Successor battles we have had  a go at, as some troop types aren't doing what they're supposed to.

So, after some thinking, this is my list of amendments that I'll be using going forward:

CL Shooting: CL shoot with all dice in all directions, and do not suffer a deduction for moving.

Elephants: Represent elephants with two elephant models and two skirmishers bases. Modify factors to VBU 4, I 5. Elephants deny Impetus to Mounted Troops WHICH MAY NOT CHARGE THEM, and keep Impetus bonus even when not fresh. Pike Armed troops that are fresh receive Impetus against Elephants. Elephants still do not get Impetus against S & non-Impetuous FL troops

Evading: CL & S may evade, regardless of the direction of charge threat.

Offset Rule: Units may line up precisely in melee, and do not have to be side-shifted to create offset melees.

Melee Break-off: Faster units may break off from melee combat by making a full move to the rear, facing the enemy in accordance with rule 5.3. The unit becomes Disordered. If it is already Disordered it may still break off, and does not suffer the effects of further Disorder. For the purposes of this amendment “S” move faster than “FL” who move faster than “FP”.

Interpenetration: Units may not be forced to move forward or backwards as a result of being interpenetrated. The interpenetrating unit moves the required extra distance to clear the back or front of the interpenetrated unit. Any unit that has to exceed its movement allowance takes Disorder and may not shoot before or after movement.

Infantry Movement Speeds: FL move at 2H+1H, the +1H having the same restrictions as the Skirmisher +2H.

For other "Classical" period battles I'll need some more changes. For example, modifications are needed for Scythe Chariots, and I haven't looked at the rules for normal chariots at all.
Posted by Trebian at 11:56 2 comments:

As Mrs T is a bit poorly and I'm creeping round the house trying to keep quiet to let her sleep I thought I'd have a look back at the wargames I played last year. In this review I have excluded board wargames, except for the games of "Raid!" I played, using figures. The exclusion of board games is a bit arbitrary and is partly because I haven't included all the board wargames I've played on the blog, but I have included map games, so make of that what you will.

The results of my survey are summarised in the table below: 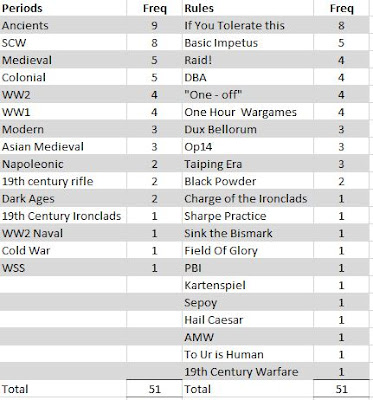 I'm pleased to see that I averaged nearly a game a week, which is sort of my aim, over the year. Of course, not all games are equal, - DBA & OHW are both short game systems and usually result in several games being played in an evening or afternoon. And it is certainly an average. I've had too many weeks this year when no games have happened, for me, at all. Our periodic gatherings with our friend from the West Country and my attendance at COW really pushed the numbers up. Of course, this list excludes all the shows where I ran "Northampton 1460", so they'd make a difference if included.

So I played 15 different periods and used 21 different sets of rules. Of those my favourite author is me, with four sets on the list, followed by Neil Thomas with three. The category "one-off" is for single shot type games that have specific rules just for that game.

What did surprise me is how few games of "IYTT" I actually played. If I'd had to guess I'd have said at least a dozen before I got to COW, so the amount of play testing was much less than I thought. I'm also surprise at how little AMW I played, its position as my "go-to" ancients rules usurped by Basic Impetus, - which also includes a couple of medieval games as well. DBA slips in there so high as it was used for my Khmer/Burmese/Thai games. The other system with a surprisingly low count is PBI, which probably would be higher if I owned a more up to date copy. And no AK47 Republic at all. That's a real surprise.

Of the systems on there I'd say there's only two I'd not care to play again, - "Black Powder" and "Sharpe Practice". "Hail Caesar" will be the basis of a project in 2018, so it will get more plays regardless of how cold it leaves me feeling. Actually, I suspect that Basic Impetus will only keep its place in 2018 as I'll be doing a battle day re-fight with it.

It's a decent spread of subjects, although I suppose most would lump Ancient/Medieval/Dark Ages/Asian Medieval in together, and you might merge Cold War and Modern.

Apart from being a sort of year end/new year type of thing to do the list may well provide me a prompt for what to look at in 2018. There's quite a few rule systems and periods not on there that deserve to be. All I need to do is find the time, - and the first quarter of 2018 is going to be tight, due to commitments both social and work, that are already in the diary.

I'll just have to play twice as hard for the rest of the year, won't I?