This weekend I’ve had a chance to get some work done on the participation version of “Call it Qids” for the Society of Ancient’s show stand. The aim is to have it ready to coincide with the distribution of the incentive game to members.
For the show game it has to be portable and robust and hopefully eye-catching. So that means solid bits of wood, polyfilla (spackle) and textured paint. Which meant spending time in the garage with power tools and full sized paint brushes, acting like a proper Grown Up.
It has to be said that despite there not being any frost it was a bit cool in the work area over the weekend, not helped by me knocking the fan heater on the floor whilst measuring up and causing a minor fire in the casing. Admittedly that warmed the garage up but it wasn’t completely safe and the smell of burning plastic led me to put this out fairly pronto.
I’ve written before about the joys of owning a Black and Decker jigsaw, and it came into play again to make nice, neat, accurate, mitre joints for the corners of the board frame. Alas my measuring skills, much cause of pain to me in my third year wood-working classes,  let me down again and I produced a beautifully aligned lozenge shape rather than the desired square. However, a judicious application of Surform and sand paper soon rectified the errors.
Alas I need to report that the jigsaw is starting to play up slightly, with the operating control getting jammed on. This is a bit disconcerting in the same weekend that the news of Paul Daniels, the circular saw and the missing digits became public.
All this left me with the liberal application of Brilliant White gloss to seal the edge of the board and provide a “reference” area away from the game board, and the use of my reliable Antique Pine quick drying Ronseal on the frame to give it a more distinguished air.
The little model of Qids, or Qadesh, is close to completion. This was more of a modelling task that a piece of Grown Up DIY. It is a complete guess based on the wall reliefs, but I’m quite pleased with it now all the turrets and towers are crowded with little Baccus Hittites.
I’m pretty much done with the figures for the game as well. I’ve even put a third figure in the Hittite chariots. I’m using Egyptian chariots for my Hittites not the normal block sided monsters you usually see. Qids’ author, Ian RL argues a pretty convincing case for this approach (for example the second wave chariots only had two crew, and the third man really surprised Ramesses indicating that it wasn’t at all normal). At the weekend I got a nice packet from Pete at Baccus with a goodly number of bullocks and asses to cram onto the baggage bases. These are now cleaned up and sitting on the painting sticks ready to go.
After them I have to do some Combat Resolution tables to stick on the game board and a turn track to do as well. However until I get some bits and pieces from our other sponsor (not due until February) the production will stall.
Although I could start working on the shrine to the gods, of course…..
Posted by Trebian at 20:03 2 comments:

After another successful playtest on Thursday evening I've been getting on with more work on the Society of Ancients' incentive game for 2012, "Call it Qids". Well, not just me. The game designer Ian Russell Lowell has been working hard on the map as well.

I think we have a final version of the rules, pretty much, although there's lots of extra bits and pieces you can always add to give players options once they're satisfied with the game as originally designed.

The intention was always to do a version of the game to be played on the Society's stand in 2012, so I've started work on that. Actually all that means for the moment is that I've gone out and bought some plywood as a base board and some edging strip. The game will be played with Mr Peter Berry's excellent 6mm figures from Baccus, although this will entail me rebasing the figures as the game doesn't exactly use DBx basing.

In order to make the point that Ramesses was a larger-than-life personality and in deference to the reliefs in the Egyptian temples that show him towering over everybody I want to use a 20mm or 28mm Pharaoh figure. Ideally I want a really nice one, but I don't want to pay over the odds for it either. Actually what I want is the figure on foot either armed with a bow as seen on the reliefs or with a mace as usually shown on the temple pylons. So, if anyone can recommend such a figure I'd be grateful (of course any figure manufacturers who follow this blog and want to send me one for free are welcome to do so).

Finally the game had one of its toughest tests last night. I playtested it with Mrs Trebian. We played it twice, alternating sides. The result was two wins for the Hittites, one marginal (when I played them) and one crushing (when they were led by Mrs T). Both games lasted 30-40 minutes each.

This was a valuable exercise as although Mrs T plays board games she doesn't wargame and she doesn't know anything much about bronze age warfare (except what she picked up from visiting Egypt, living with me and reading about Ancient Egypt. Okay she probably knows lots). What this means is she will try things that wargamers don't think of and asks the obvious questions we all overlook. She may also have hit upon the optimum strategy on her second outing on the board, despite the Sherden bodyguard standing instead of routing for the first time ever. It also confirmed what I've been thinking for a while. The first few moves are pretty slow and fairly one sided so you need to get past those for the game to work as the second half has lots more going on. Still, very pleased with the progress, and optimistic about hitting production target dates for both the giveaway and show game.

If anyone has any questions, just ask away.
Posted by Trebian at 11:14 No comments:

The last few days have been dominated by work on the Society of Ancient's incentive game for 2012. After a layoff of too many months for a variety of (mainly personal) reasons we got back to play testing on Thursday evening.

For those of you who missed the announcement this year's game is "Call it Qids", a simple refight of the battle of Qadesh or Kadesh or Qids or however you want to spell it. The design is by Ian Lowell who has written a lot on the battle and Hittites and Egyptians in Slingshot over the years, but I think everyone in our group has put in their two pen'north into the design. I'm project managing the process, which means I get to do the counter design (you can see Ramesses on the left, -he's a stand up counter, unlike all the others in the game, and is about 1" tall when assembled), write up the rules and produce the booklet and chase anyone else who should be doing stuff. Ian is working on the map and writing a brief historical article as well as sourcing some of the graphics we need.

The game plays in about an hour depending on how it goes and seems to us to be a lot of fun. The production is a little simpler than last year's, with its double sided map and the cut out castle. Alas times are hard, so we've had to be careful with what we put in the pack, but you still get an A4 rules booklet, a sheet of counters and an A2 map board. I think we've put a quality game and product together which hopefully everybody will play and enjoy at least once. Here's a mock up of the cover, - all b&w this year, but we may be able to spice it up a bit before final production.

Happy to answer any questions from both members and non-members.
Posted by Trebian at 19:50 5 comments:

I was buying a big zoom lens for my DSLR recently and accidentally keyed the details wrong into Amazon. It came up and showed me a really cheap set of Macro Extension Tubes. Like less than £10. Here's the link: http://www.amazon.co.uk/gp/product/B001CWZE6A.

Now I had a set of these years ago for my old SLR and used them to do figure close ups, but they were always a bit expensive. However at £7.99 + p&p I thought they were worth a look.

Now you have to be careful attaching them, and it's a matter of judgement how many bits you use for each picture plus it disables your autofocus (not a problem for those of us who used SLRs in the 1980s) but I reckon the next photo shows they're worth it: 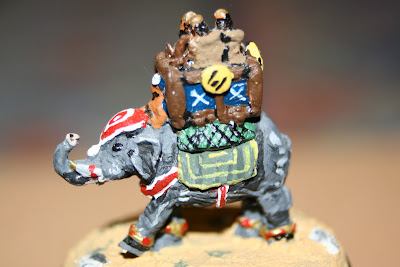 This is an Irregular Miniatures 6mm scale elephant, standing on an upturned Humbrol enamel tin. I took it with an 18-55mm standard Canon lens on an EOS 350D, using a 14mm extension ring.