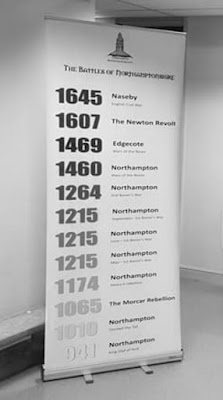 As some readers will remember I not only write wargames rules, but I published a proper history book last year, on the Battle of Edgcote in 1469. I did this because I'm the Secretary of the Northamptonshire Battlefields Society, and last year was the 550th anniversary. We then took a nice model built by Phil Steele round the shows. I'm sure I've mentioned this before.

The book, and indeed other publications the Society has done, are an important part of our role in promoting, protecting, and educating people about, Northamptonshire's military history. They also make a small amount of money for us, which helps to keep membership fees down.

When we do the shows or put on an event anywhere, we usually pop up the banner on the left. This lists the battles that we knew about when the Society started a few years ago.

Not all of the battles on there are well known.

And we get questions about those. More than the famous ones. 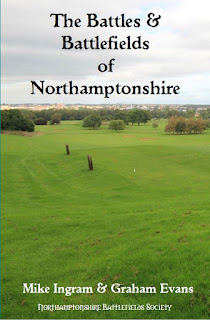 So we thought we'd probably better do a book about them. Which is what Mike Ingram (guru on Bosworth - not one of ours - and Northampton 1460) our chairman, and I, have been doing over the last 6 months. And it's about ready for publication. And we got some extra battles for the banner, too.

A lot of writing is about sitting at your desk and hitting the keyboard, but there's also books to consult, battlefields to walk and pictures to take, so the Coronavirus has played a bit of merry hell with that, but even so we've manged to get a text and pictures that we like done in the timescale we wanted. Sort of scuppered the launch at the Battlefield Trust AGM, alas.

The last month has been bashing it into shape. Making sure we don't contradict each other between chapters, and ensuring that the story is coherent. And proof reading. And editing. And revising. And re-proof reading.

Still. We're about done. Official launch date is 1st May, and we're taking pre-orders (there's more on how you can do this over on our Facebook page: https://www.facebook.com/groups/Northampton1460/). Cover price is £9.99. Go on, order it.

So that's why I've been a bit quiet. I've also been sorting out how we're going to manage the postal sales, as we thought we'd give that a go this time round (we make an extra couple of quid a copy if we buy in bulk from Amazon and then sell on. Plus we get to put promotional stuff in the envelope and maybe get more paying members).

What a Chap's Doing

I don't think I'm exactly in a "lockdown" routine, but I seem to be lining up things and getting them done. This morning I e-mailed out the Northamptonshire Battlefields Society newsletter for the last quarter. It was an odd edition to compile as mostly it covers the talks we've had (and we were one short last quarter) and reports on events and shows we've done or are going to do. Luckily the two talks we did have this quarter warranted extra page space, so I didn't have to be as ruthless in the edit as normal. I also sourced an article by Mike Ingram, our Chair, on how Northampton dealt with the plague in times past (the town locked its gates and didn't let in anyone from London). So that's a job well done. 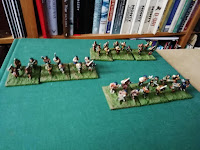 I've tried to mix up what I've been doing, so I've been at the painting table and made a decent dent into my Peter Pig Montrose Scots lead pile. Here are some Highlanders. Got three more like this to do. Painting also means I can work through my backlog of podcasts, so "Hello to Jason Isaacs" 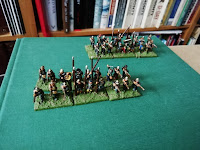 Next up are some Irish Regulars.These are quite nice figures. Very good detail and good clean castings. One more of these to go. NB I will do the Ensigns once I've finished all the painting, as I draw them on the PC and it's more cost effective just to do one sheet's worth at the end. 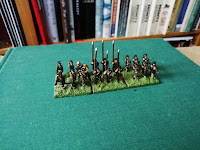 Then I did some lowland foot. The main difference to the Irish is they wear berets not helmets. I've already got a load of these in my Covenanter Army. One of those pikes will have a flag on it so I can tell them apart. A couple more of these to do. 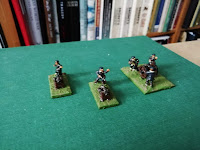 Finally some artillery. This is a standard sized saker type gun and a couple of the very light ones that come two to a packet. I've got another three of the big ones and another pair of the tiddlers. I did the small guns on half sized bases, - or rather infantry bases turned through 90 degrees. 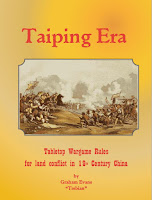 On the rule writing front the Taiping Era writing up has started. I'm currently trying to put the organisation of Chinese units into a comprehensible paragraph or two to work with the rules. It is so much easier when I set up games just for me! As a distraction to the madness that is the Qing/Ch'ing dynasty military system I started work on the cover. It is in yellow, and the text is vermillion, as befits such an important document. 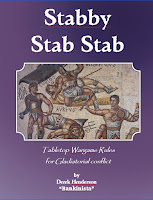 In tandem with this I'm also working with my oldest wargaming friend (other than my big brother) Derek, to produce a set of gladiator combat rules. Well, I say working with. He's doing all the game development and writing and I'm making clever comments and suggestions. But it is good to be doing this. We haven't written any rules together for nearly 40 years and life has meant we've ended up moving to different parts of the country, so on the positive side the lockdown has got us back in regular contact with the promise that we will get back together. The last game we had together was in 2013, and that's way too long. We're still not sure on a title for the rules. It's a dice based system, so I suggested "Dicing with Death", but he prefers something based around "Ludo". So the cover isn't exactly finished yet, and has a holding title on it. It's in imperial purple, of course.

Well, all of that should keep me busy for a while.