Back at the Keyboard

Got back from holiday yesterday afternoon, - just had a week in Morocco, doing the "Royal Cities", hence the distinct lack of blogs and progress on painting the District 9 aliens.

The holiday had a lot of coach travel to fit in Marrakech, Fes, Rabat and Casablanca, but was very enjoyable none the less. No real wargaming connection for me, - except I dabbled with the Rif Wars many years ago as I fancied the idea of chasing Arab horse men with Renault light tanks. I even bought the Matchbox tank kit & a packet of Airfix Bedouins. And some Revell Foreign Legion. Anyway, never made much progress with it.

Of course I get inspired by most things I see, so the idea of doing an Almorovid army keeps creeping up on me. Fortunately Hat haven't released the Arab cavalry boxes in their El Cid range, so I may escape. 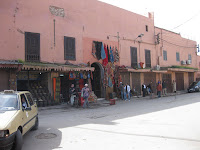 Marrakech is striking, with its medieval walls still very prevalent. It is also mostly pink, with a marvellously hand made look about it as you can see from the picture. In fact I'm rather encouraged that my scratch built desert buildings looks more authentic than those from some resin suppliers! Alas, on reviewing my photos I notice that I have completely failed to take any pictures of the more scruffy bits of any Moroccan cities, - which is odd because I thought I'd taken quite a few. Maybe they're on the video camera. Anyway it is the sort of colour that'd get laughed at if you actually painted your model buildings that way and put them on a wargames table.

The northern cities - such as Rabat and Casablanca are more pale yellow and white (hardly a surprise for "Casablanca") so I won't be repainting any time soon.

So now I have the task of editing the pictures and doing the captions and trying to make sense of the video footage and then catching up on all the stuff that hasn't been done for the last week. Like sorting out my credit card company who are a bunch of numpties, fixing my mobile broadband dongle (which finally arrived) and a host of other stuff

Last note: My earlier blogs have talked about how I'm careful with what I use to paint figures so I have to do little mixing and what I want to use is readily available locally. Hence I use some GW colours, - in this case "Bronzed Flesh". I found out today it has been discontinued, so thanks to the 12 year old in my local GW store who went into their basement to retrieve me the last two pots.
Posted by Trebian at 14:07 No comments:

Just realised that I've not posted anything for a couple of weeks. In keeping with the intention of this blog I should now blame that on being very busy at work or some domestic crisis. I fact neither of those is true, - although I'd like to point out that I have been very busy at work, it's just that this hasn't interfered with my wargaming or blogging*.

As I said in my last blog I was very close to finishing my ECW painting project. I actually managed that this week, with the last few command figures finally completed. Of course, nothing is every completely finished as I need to find a way to attach them to bases with variable names so that I don't have to collect an officer figure for every single ECW general. I had a cunning plan but that involved carving circles the exact size of 2p pieces in 2mm plasticard or plywood, and that isn't going too well. An alternative plan to use magnetic tape is also foundering as I don't seem to have any, and neither do the local hobby supply shops. On the bright side there is a company that makes sabot type bases for 2p piece based figures, if memory serves correctly, and someone will post a comment on this blog to let me know who that is.

The other piece of work on the ECW is to finalise the rules. We had another game on Friday evening and when I got to the venue I realised I was a bit light in the rules wallet. To keep track of everything I use red plastic wallets, - each rule set has its own wallet with copies of the rules, playsheets and markers in it. The theory is I just grab the wallet and chuck it in the toy soldier box when I go out. However the ECW wallet had one solitary set of an early version of the rules and a couple of playsheets that didn't tie up. What have I done with the other sets? I have a suspicion that after the last playtest I never got round to updating the PC version with all of the various tweaks and have thrown out the later versions as they were covered in pencil scrawl. Hmmm.

Any how we had a fine old set to on Friday, with a late war Parliamentary force trying to extricate itself from a Royalist pincer move. As we had three players this gave a fine opportunity for the Royalists not to co-operate fully, which they duly did. The game suffered from a number of problems. As I said I got to the game and discovered I didn't have enough rules for everyone. Then one of the players remarked that he was looking forward to the game as he hadn't played the rules before. And finally, in retrospect, I laid the start lines too far apart and wasn't completely clear on the scenario. Oh, and I got the unit combat statuses in the wrong order (it goes Unsteady - Disordered, not the other way round).

Apart from that it played really well, with lots of action and incident.

And then I discovered that in my haste to finish everything off I'd stuck the standards for the last two regiments onto pikes, not standard bearers. So maybe not finished then.

Regardless of this, I think we are now in a position to start refighting all of the battles of the ECW, as far as we can, using Richard Brooks' excellent "Cassell's Battlefields of Britain & Ireland" as a guide. I think I have mentioned this book before, - if I haven't all I'll say here is that it is an unsurpassed single volume guide. It's particularly helpful as it is written by a wargamer, so he has an eye for the sort of detail wargamers need, - such as it is available.

So that sort of takes care of Endings & Middles, - what about beginnings?

Well that would be the Aliens in Africa game for CoW. Progress is being made. Figures are being painted. Thinking is being done. Part of the thinking is that each player will have access to a handbook with lots of useful background information on the aliens, the mission, useful phrases, country history & so on. These booklets will be available throughout the weekend for players to get some background before they start to play. They should also contain enough background information to provide a framework for other games as well. I've made a start on this, - well, what I mean is, I've done the cover which shows a stylised human and alien holding hands against the backdrop of the world. "Hands Across The World" is the Operation name for the scenario the players will be taking part in.

And that sort of brings me up to date. Blogging will disappear for a while, probably, as my internet provider won't give me a mobile broadband dongle and won't answer any letters or calls as to why (actually this isn't completely true. I can't call the department concerned as the company won't give me a number. Use of the word "Byzantine" to describe the operations of my ISP is barely adequate. They have structures and processes that make Gormenghast look like a thoroughly modern and well organised undertaking)